The Duke and Duchess of Cambridge have arrived to join Sir David Attenborough for the naming ceremony of the polar research ship the public voted to call Boaty McBoatface.

That name was vetoed and the ship is being officially named the RRS Sir David Attenborough in a ceremony at the Cammell Laird shipyard in Birkenhead, Merseyside, today.

William and Kate are being given given a tour of the ship and meeting a team of engineers, including young apprentices, who have been involved in the build.

Kate is wearing a cornflower blue utility coat by Alexander McQueen that she has previously sported on three separate occasions.

Joined by Sir David, the royal couple are also meeting scientists, who will demonstrate the state-of-the-art equipment used to carry out research, and schoolchildren involved in the British Antarctic Survey’s (BAS) Polar Explorer programme.

The Duchess looked in good spirits as she crossed the docks in Birkenhead, Merseyside to board the new ship 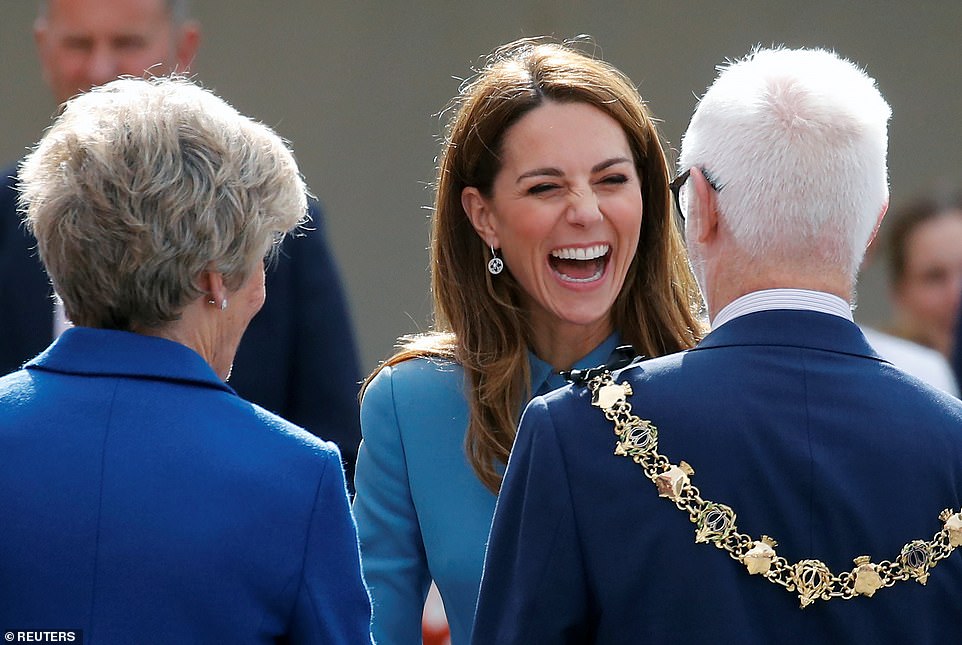 Kate was seen laughing with local dignitaries in Birkenhead, the Merseyside docks which have built the new ship 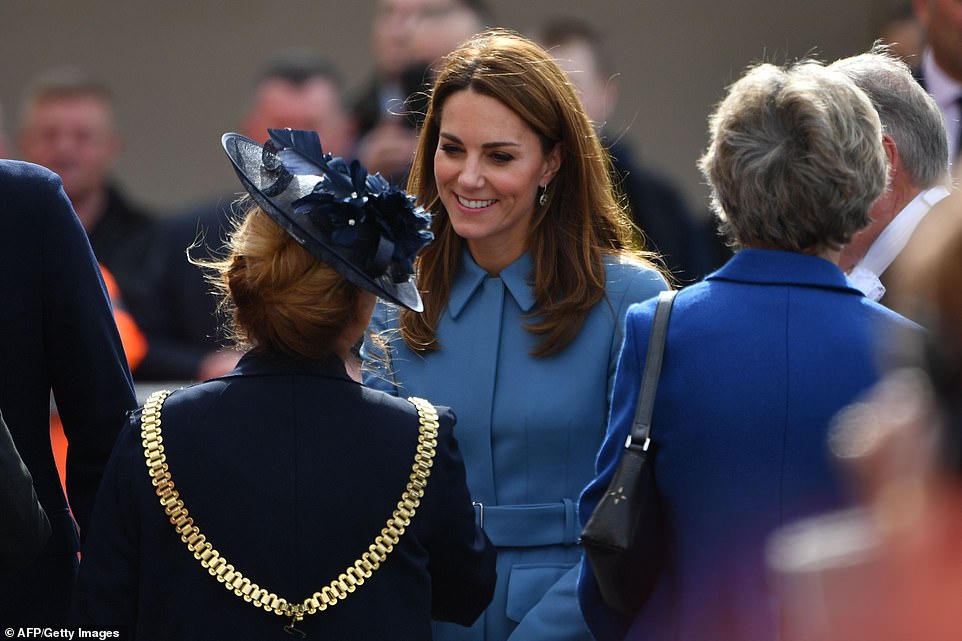 The Duke and Duchess of Cambridge are being given a tour of the new ship, which it is hoped will provide new scientific insights in the oceans and global warming 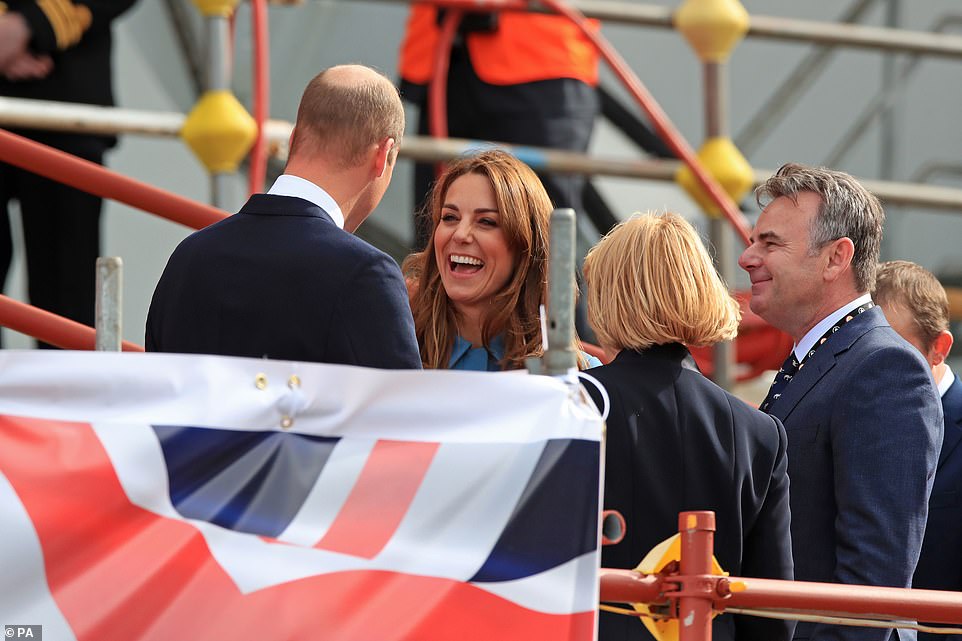 Kate looked in high spirits as she and her husband boarded the boat, which will soon set sail for the seas around the Antarctic 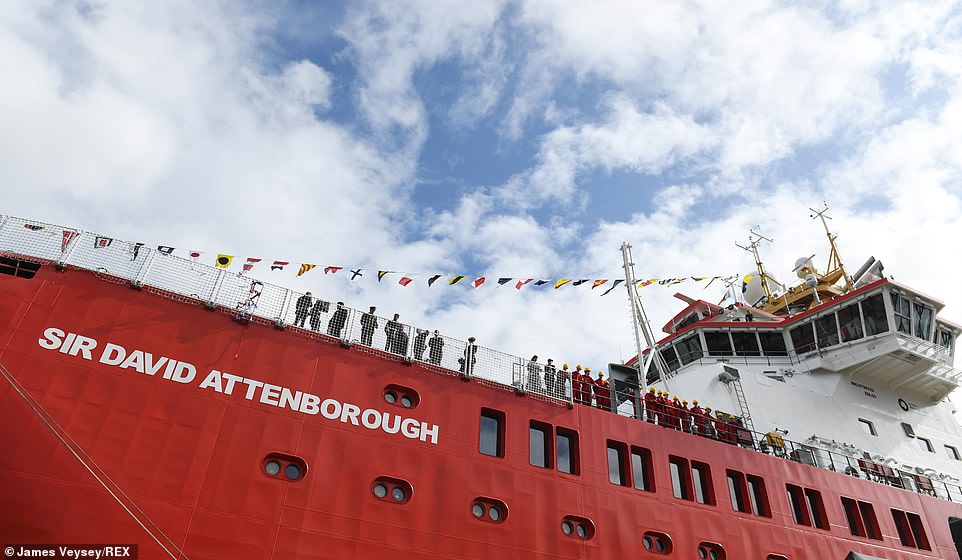 The royal couple will hear from the ship’s captains and crew members about its ice-breaking capabilities and navigation systems before attending the official ceremony.

William and Sir David are expected to make a few remarks before Kate, as sponsor, formally names the ship when a bottle of champagne is smashed against the hull.

The vessel, owned by the Natural Environment Research Council (NERC) and operated by the BAS, will enable world-leading research to be carried out in Antarctica and the Arctic over the next 25 to 30 years.

More than 124,000 people voted to name it Boaty McBoatface in a public poll, but that name was vetoed and it was instead named after the broadcaster.

But Boaty lives on, in the form of a miniature, unmanned, yellow submarine which will be on board the boat.

The hull of the ship was launched by Sir David last summer, before it was taken to Cammell Laird’s wet basin, where shipbuilders finished the vessel. 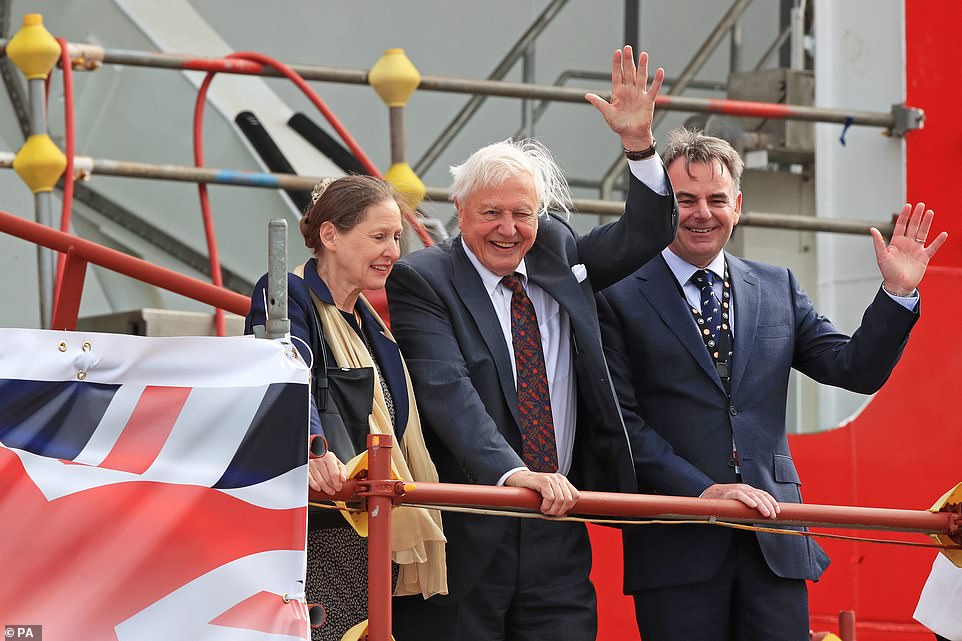 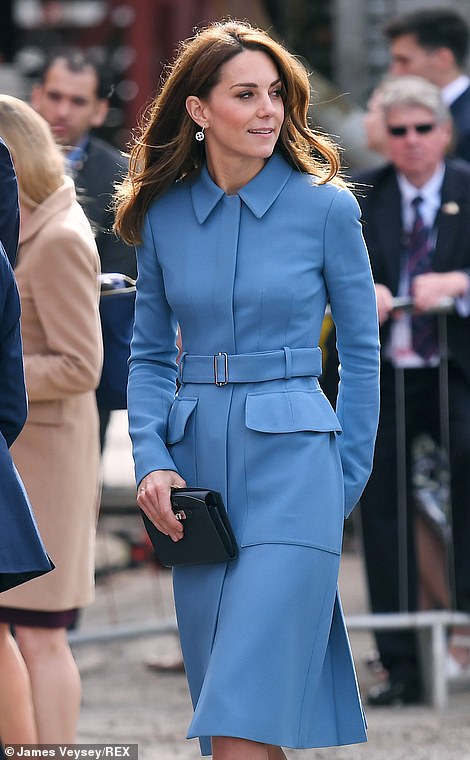 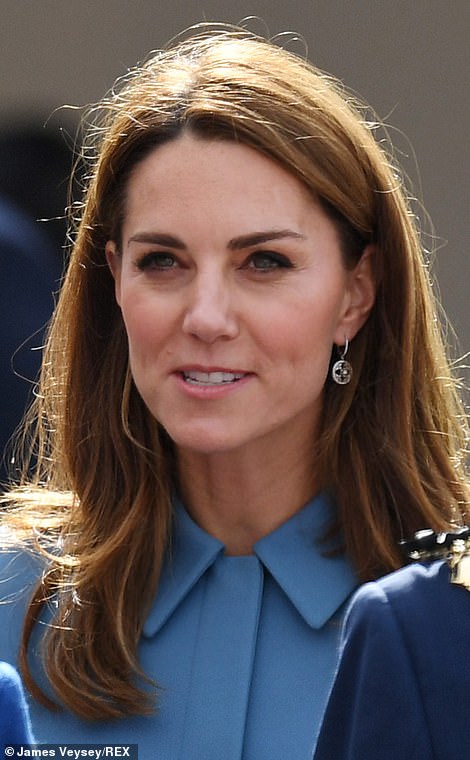 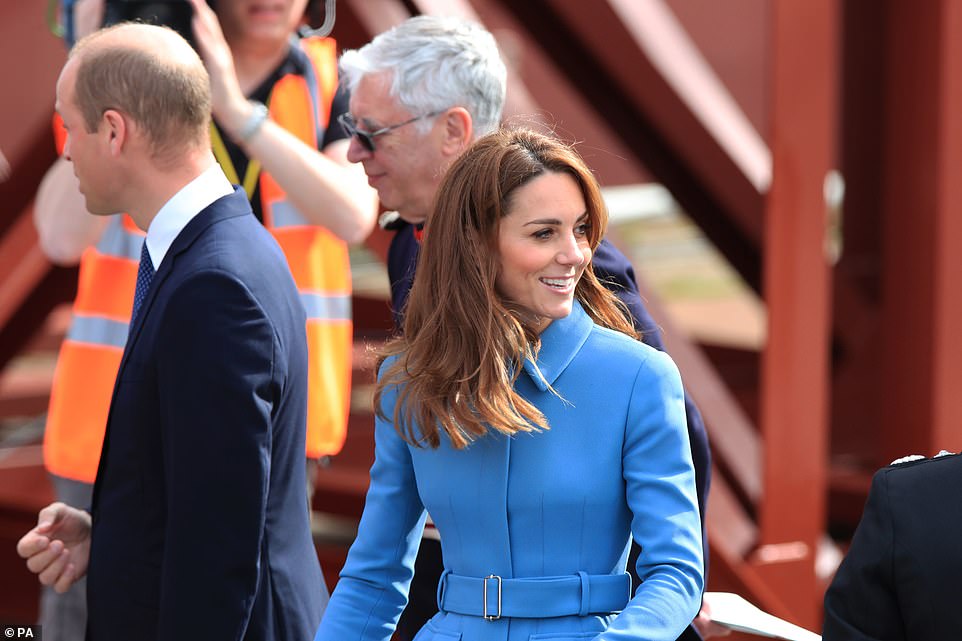 The royal couple will officially name the new ship, which was the subject of a high-profile public vote 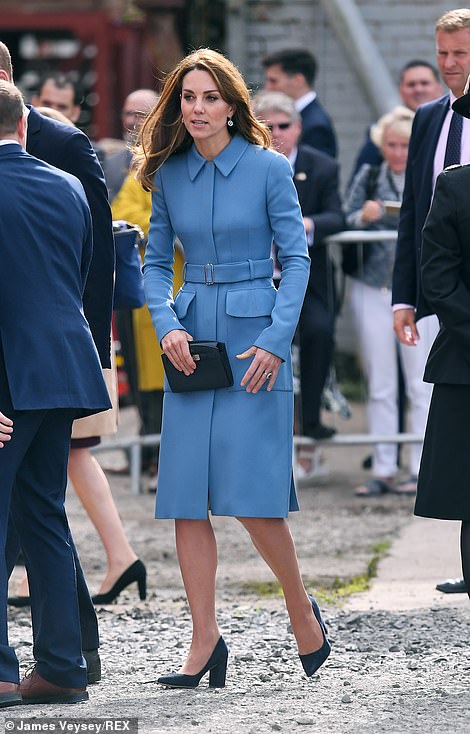 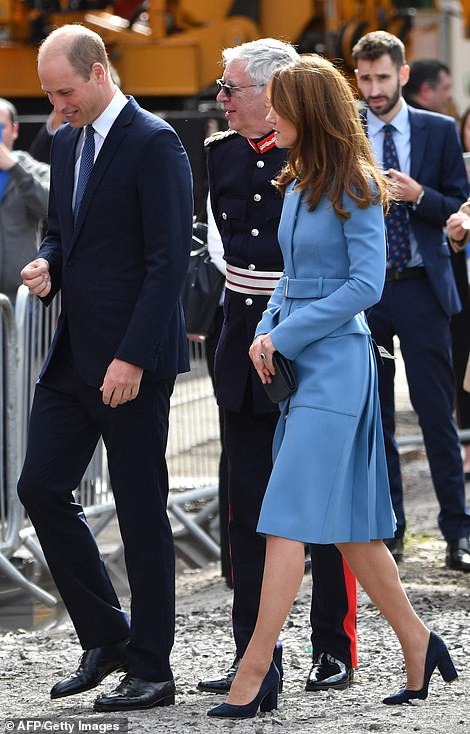 The couple are due to meet scientists, who will demonstrate the state-of-the-art equipment used to carry out research 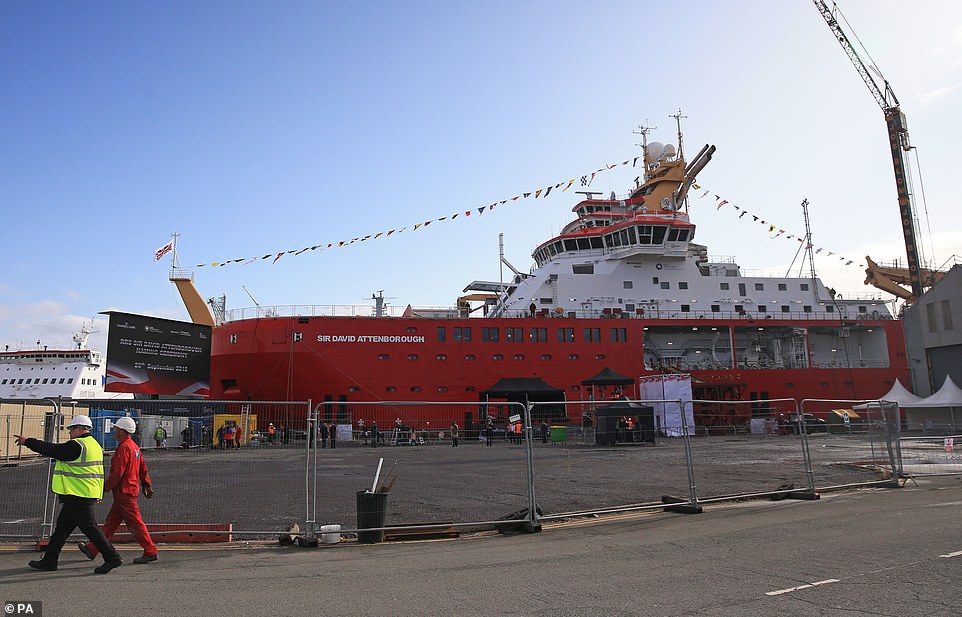 The royal couple visited the ice-studying ship on the same day as William’s brother, Prince Harry, gave an impassioned speech backing teenage activist Greta Thunberg and he declared the world was in a state of ’emergency’ and ‘losing’ the battle against climate change.

The Duke of Sussex was speaking 5,000 miles away in Botswana as he took part in a tree-planting project.

Harry stressed saving the environment was a race against time, adding: ‘Led by Greta, the world’s children are striking.’

He said he could not understand why anyone – ‘you, us, children, leaders’ could ignore the facts from the last four decades.

What is the new research ship and what will it do?

Work on the £200million antarctic research ship began three years ago with the laying of the keel in October 2016.

It is funded by the British Antarctic Survey (BAS), which is in turn funded by the non-departmental government body, the Natural Environment Research Council (NERC).

It is hoped the vessel will enable new research into climate change, pollution and other environmental concerns, by studying the ocean, seafloor and atmosphere.

The ship has a range of 19,000nm, enough for a return trip from England to the Rothera Research Station in the Antarctic, or to circle the entire Antarctic continent twice.

It requires 30 crew members, but much of its work is carried out by robots, which developers say makes it more efficient and decreases its environmental impact. 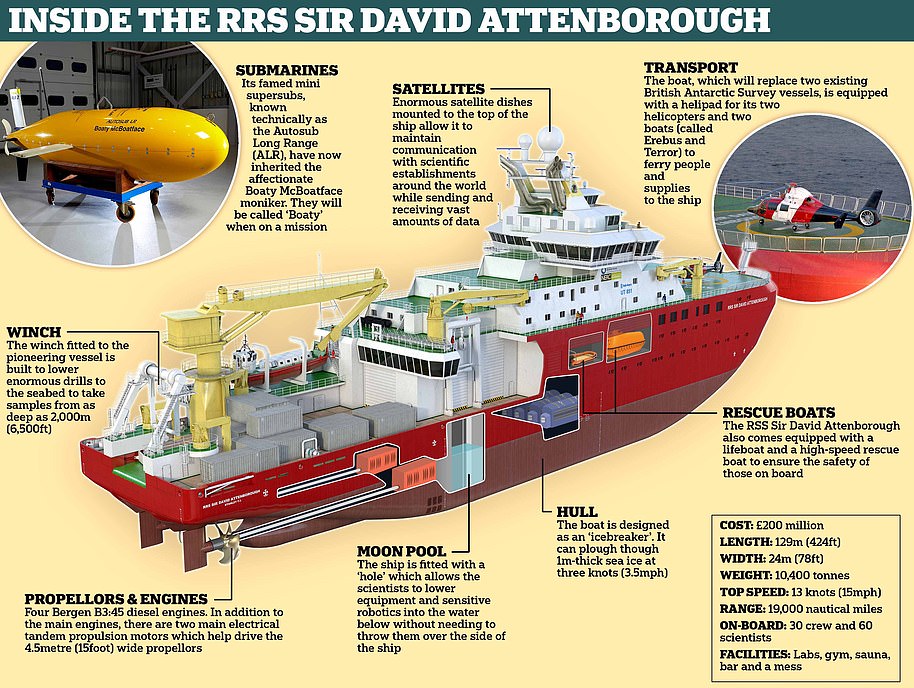 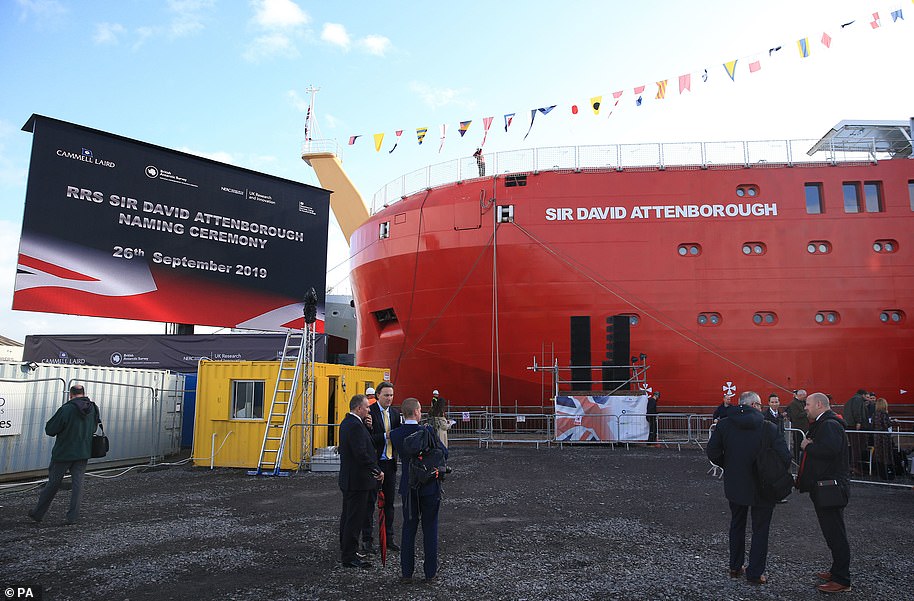 The BAS’s website states: ‘Marine robotics and remotely operated vehicles will capture data from the deep ocean and previously inaccessible locations under the ice. The famous Boaty McBoatface will be deployed on scientific missions in the Polar Regions.

‘The polar research ship to feature a moon pool – a 4m vertical shaft running through the vessel and open to both the air (at deck level) and sea (at the hull). Using the moon pool, scientific equipment can be deployed and recovered through the centre, and thus most stable part, of the hull.

‘The new polar ship for Britain will operate year-round. She will spend the northern summer supporting Arctic research cruises and the austral summer in Antarctica carrying out research programmes and transporting people and supplies to BAS research stations.

‘With her ability to spend up to 60 days at sea unsupported, and an ice-strengthened hull designed to break through ice up to 1m thick, the RRS Sir David Attenborough will undertake extensive voyages.’ 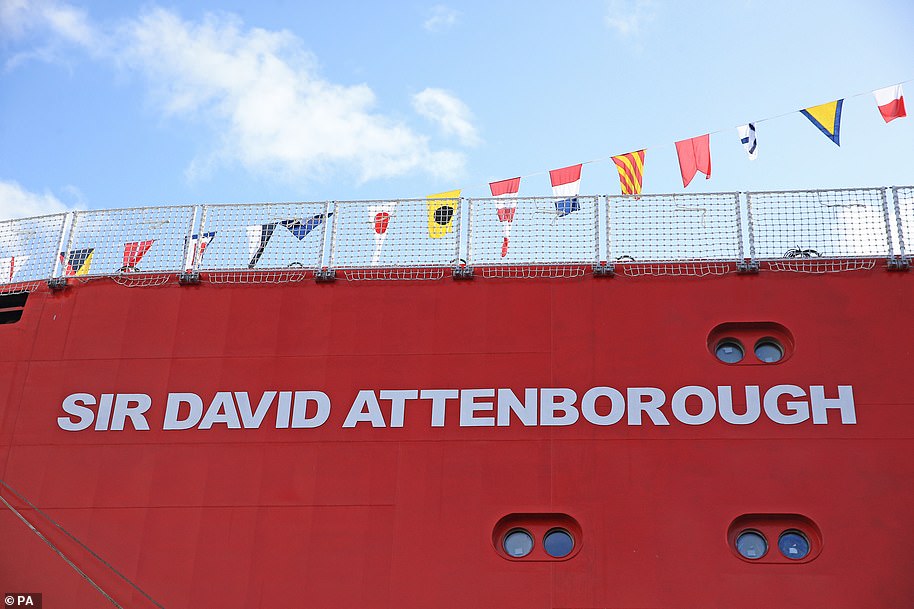 The naming ceremony of the polar research ship will take place at the Cammell Laird shipyard in Birkenhead, Merseyside