Kate Garraway appeared overcome with emotion as she watched her neighbours light coloured smoke flares in the 8pm Clap for Carers on Thursday night, as her husband Derek Draper continues his battle against coronavirus.

The Good Morning Britain presenter, 53, beamed as she watched children fill the street with coloured smoke and got her phone out to film the touching moment.

Derek, 52, is understood to be in an unresponsive critical condition following seven weeks in intensive care after being admitted to hospital with Covid-19.

Touched: Kate Garraway appeared overcome with emotion as she watched her neighbours light coloured smoke flares in the 8pm Clap for Carers on Thursday night

Earlier in the day, Kate shared a heartfelt thank you to fans for their ongoing support.

The Good Morning Britain presenter, who has regularly kept followers updated with Derek’s progress, told how the messages of support have ‘meant the world’ to her as her husband fights for his life in hospital.

Writing in her latest blog post, Kate said the kind words were ‘comforting’ as she tries to remain strong for her husband and children Darcey, 14, and William, 10. 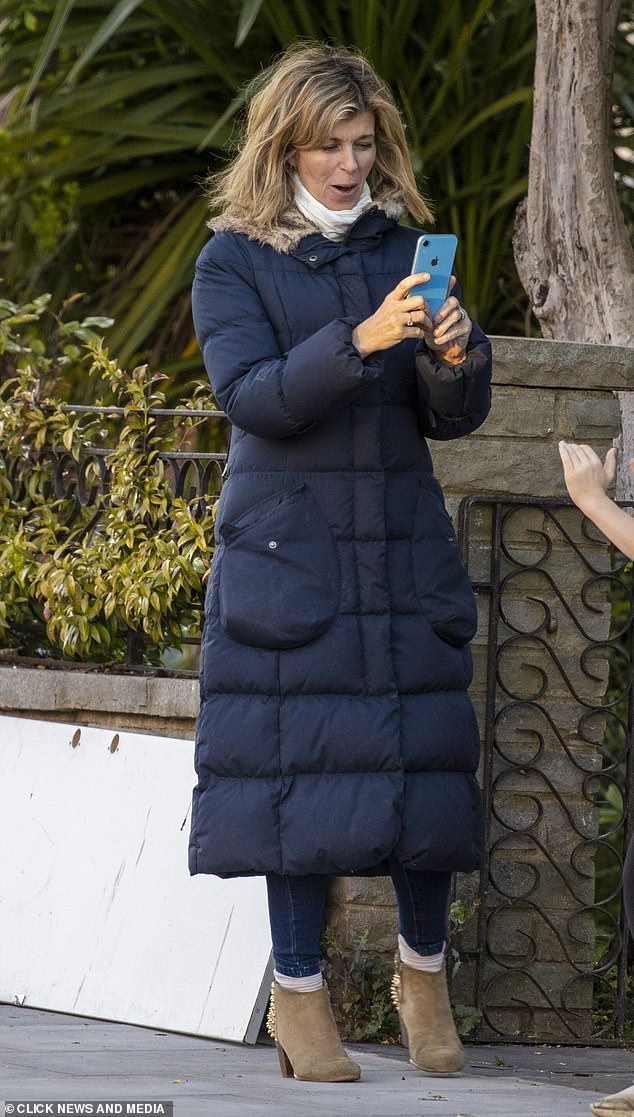 Poignant: The presenter whooped and cheered as she watched her neighbours light fireworks and run around with the light up flares 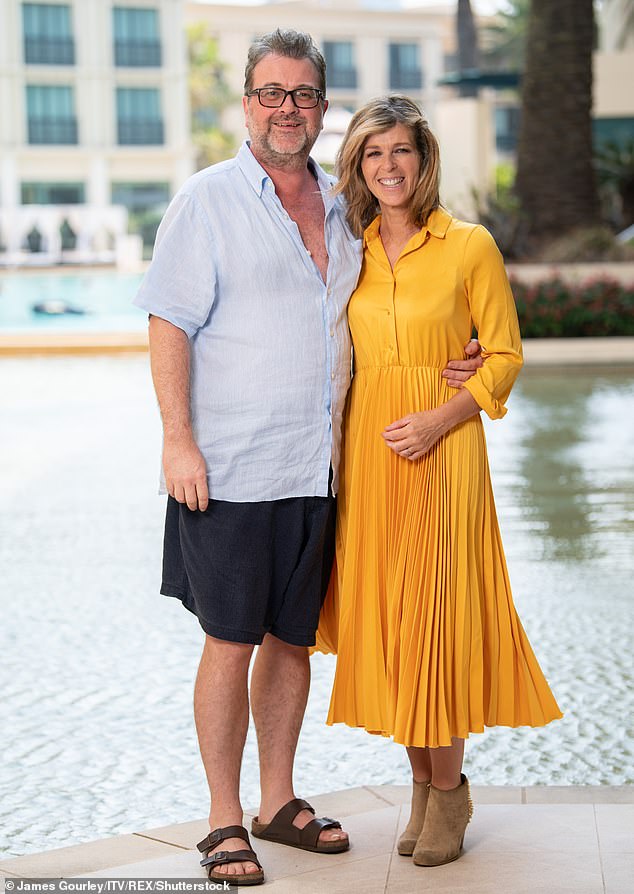 Critically-ill: Kate’s husband Derek Draper, 52, remains in a coma as he continues his battle against coronavirus (pictured in December) 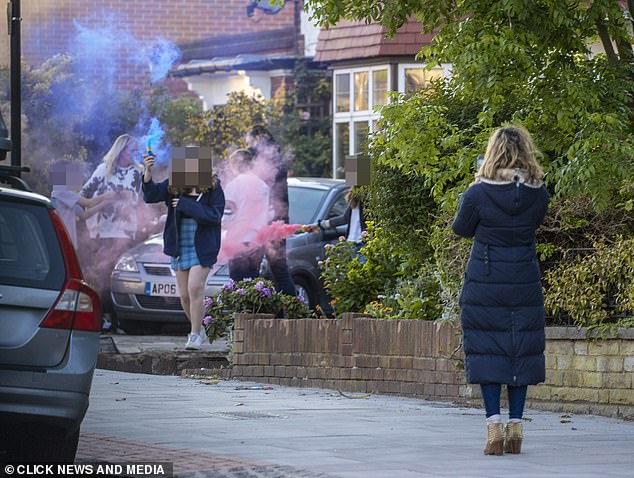 Thank you NHS! The Good Morning Britain presenter, 53, beamed as she watched children fill the street with coloured smoke and got her phone out to film the touching moment

She said: ‘I wanted to send a huge thank you to all of you who have sent me such wonderful messages wishing Derek well. It has meant the world to me.

‘I am sorry I have not been able to reply to them individually, as I am sure you will understand that I am focusing on my family and Derek right now.’

The TV host continued: ‘In quieter moments I am reading all of your messages and they are so comforting and wonderful to read.’ 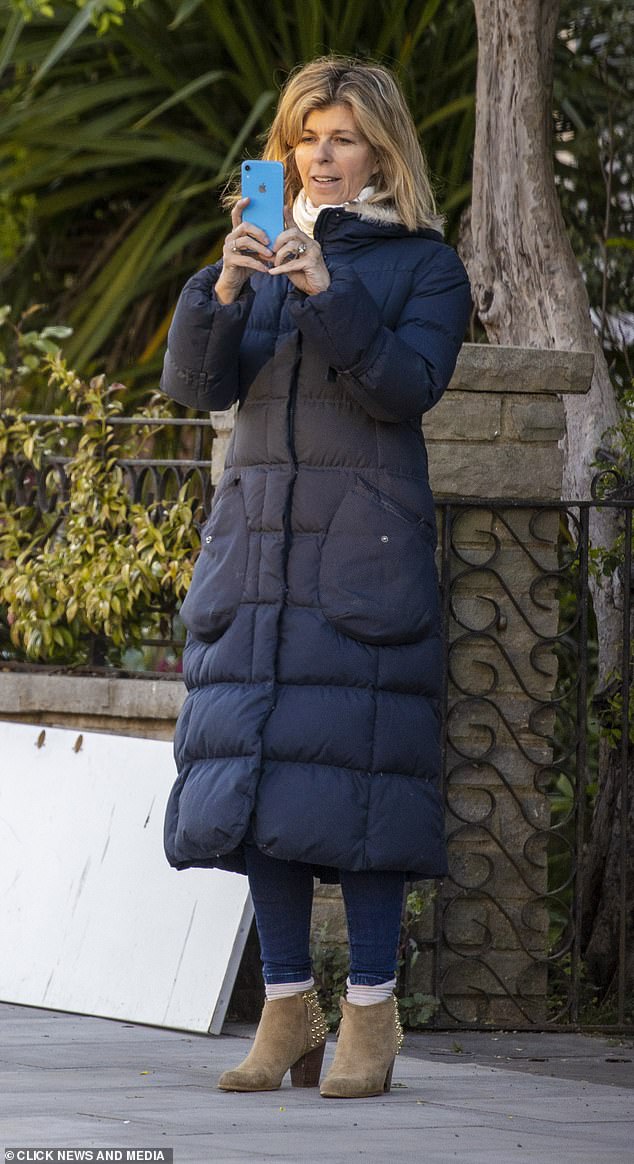 ‘It has meant the world’: Earlier in the day, Kate shared a heartfelt thank you to fans for their ongoing support 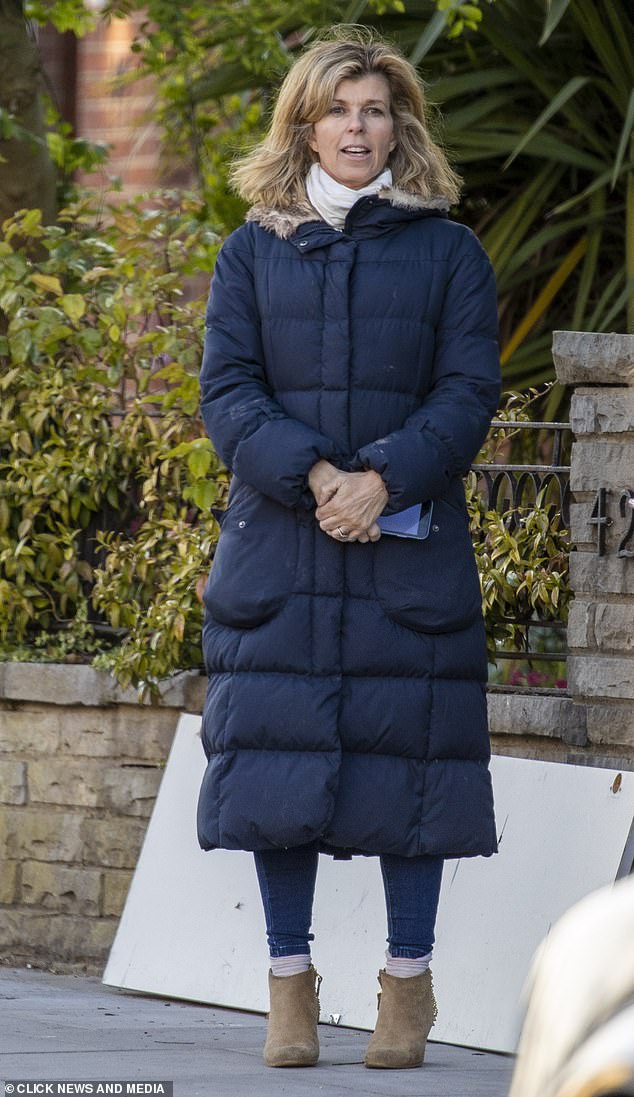 Grateful: The presenter has joined the nation in the clap for carers, which thanks the NHS and key workers, every week 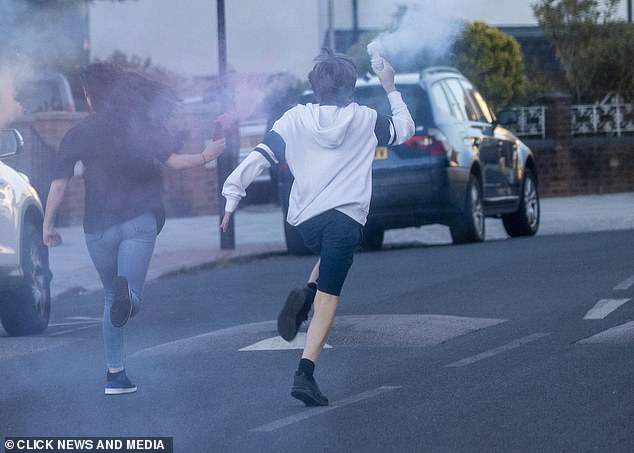 Kate is said to be phoning her husband, with whom she raises children Darcey and William on a daily basis while he remains on a ventilator in intensive care.

Talking to COVID-19 survivor Julie Stanfield, her daughter Gabrielle and the NHS staff who saved her life on Wednesday’s edition of GMB, Ben, 45, admitted his co-host had found a degree of reassurance in calling Derek.

He said: ‘One of our colleagues, Kate Garraway, has said that one of the things that has been really comforting for her is the fact that the staff are taking her phone in the evenings and she can talk to her husband. 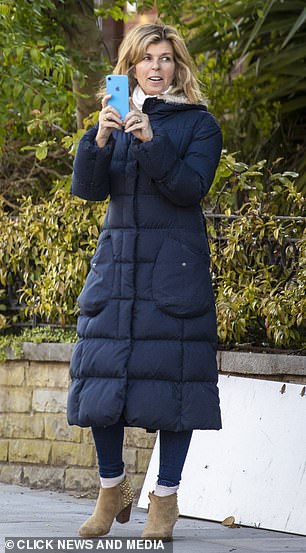 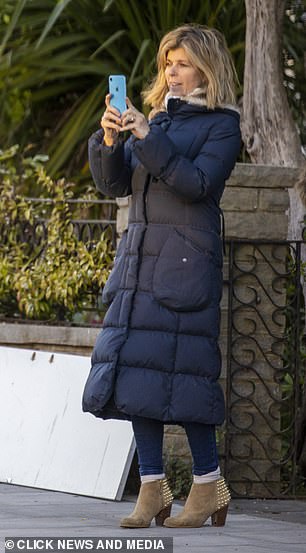 Thankful: Kate has been sharing the clap for carers on her Instagram every week 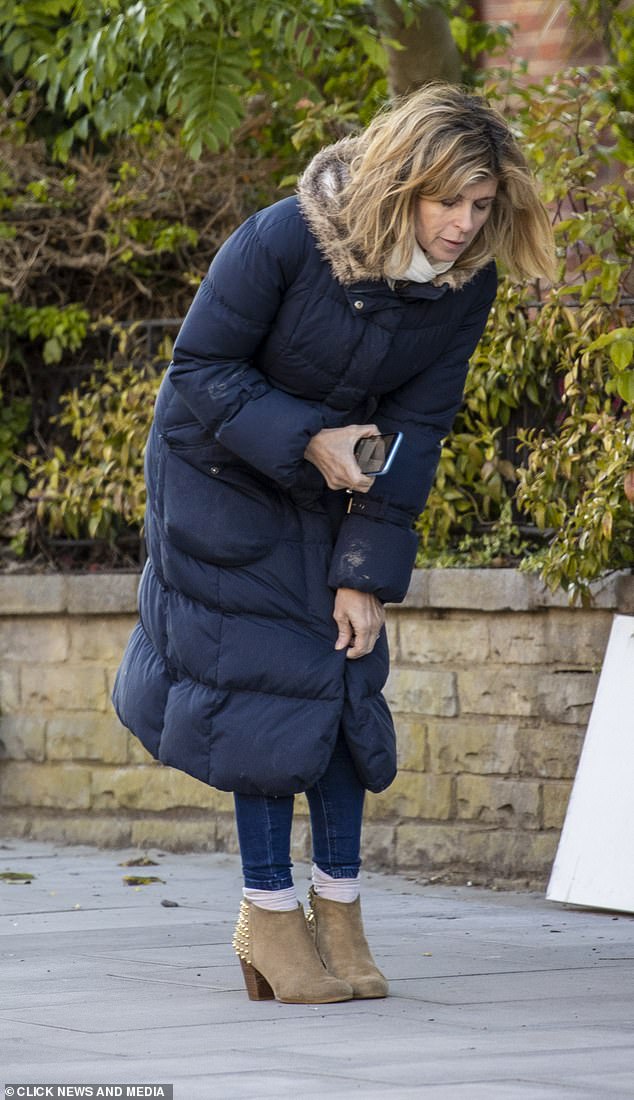 Worries: The former I’m A Celebrity star is said to be calling Derek every day, but has ‘no idea if he’s responding but it certainly gives her a sense of comfort’

‘She has no idea if he’s responding but it certainly gives her a sense of comfort and there is the hope that it is.’

Last Thursday, Kate updated her supporters to reveal Derek was ‘still with us’ and ‘fighting so hard’ to beat coronavirus.

And the following day, Kate was given hope while her husband battles on in hospital, by fans sharing their stories of recovery from COVID-19 after weeks in ICU.

The GMB presenter thanked a fan for telling her about her own husband’s survival of the virus, following a seven-week stint in intensive care. 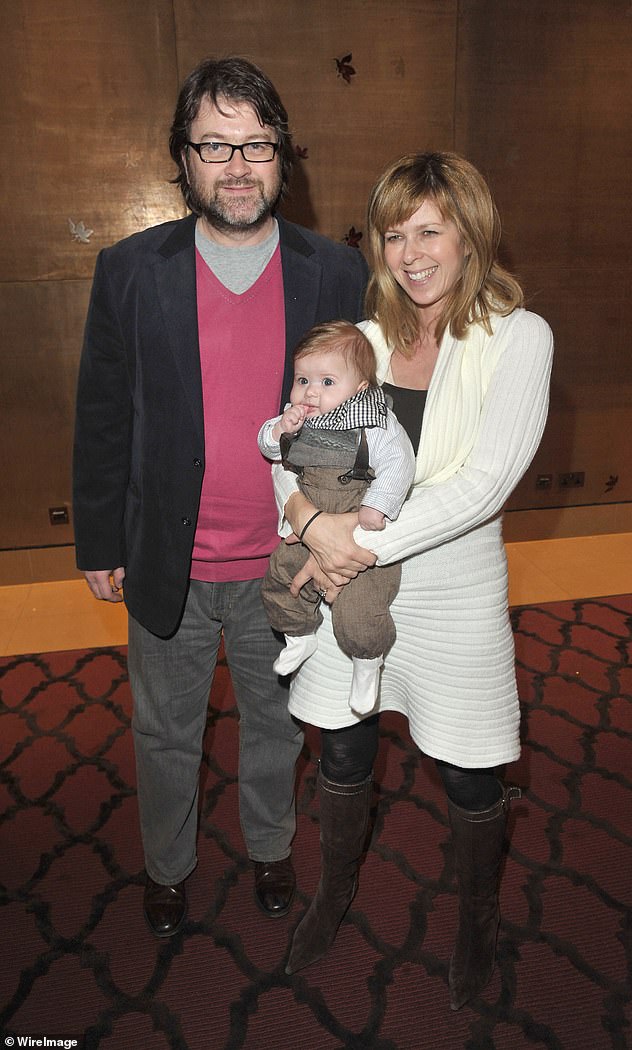 Challenges: Kate and Derek have been married for 14 years (pictured in 2010 with their son Billy)

Derek is best-known for his career as a former lobbyist. During his time as a political adviser he was embroiled in two political scandals – 1998’s Lobbygate and in 2009 a scandal surrounding LabourList, the website he edited.

He went on to write two books – Blair’s 100 Days and Life Support – before retraining as a psychotherapist.

Kate and Derek have been married for 14 years, with the former lobbyist cheering his wife on for the duration of her stint on I’m A Celebrity last year, he flew out to Australia with their two children to meet her.

The couple, who wed in September 2005, have previously discussed their union, with Derek admitting that he feared she was ‘a high-maintenance TV bimbo’.

Following her stint on I’m A Celebrity, the couple were planning to renew their vows in the coming months. 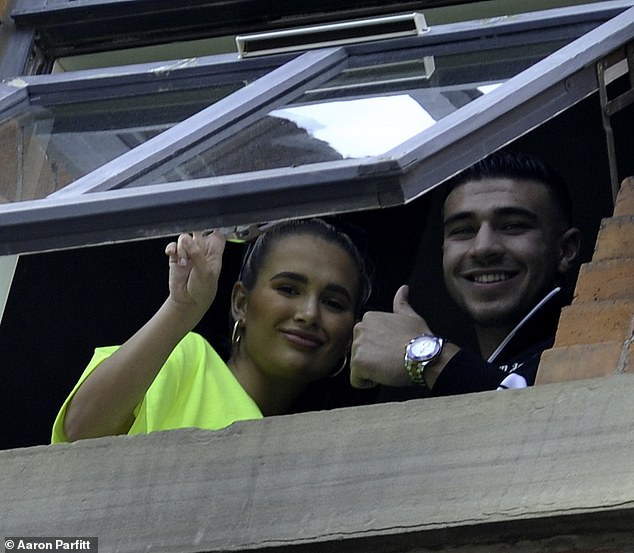