She recently opened up about shaking up her workout routine after giving birth to her daughter Rani Rose.

And Kate Hudson showed off some of her stellar results on Saturday with a scintillating photo posted to Instagram.

She paired the top with a matching beige skirt with a high cutout to reveal her fit legs.

The 5ft6in actress rocked a modest yet elegant made-up face with a lovely soft smile, and she let her long blond lock rest across her shoulders in delicate waves.

She had a vodka martini clasped in her hand as she showed off her dark nail polish.

‘Hosting my first underboob martini party and I’m into it!’ she caption her photo while adding a martini emoji.

Letting loose: Kate Hudson, 42, celebrated her first ‘underboob martini party’ on Saturday while unwinding with a drink in a striking crop top and a skirt that highlighted her toned tummy

Although she didn’t label it as such, Kate appeared to be advertising her King St. Vodka, as she left a bottle of it just out of focus on the counter.

She launched the California-based spirit company in 2019.

It appeared to be a two-drink day for the actress, as she posted a photo of a modest Bloody Mary later in the afternoon.

‘Officially on break,’ she captioned it, adding a rainbow emoji that read, ‘Happy.’

Kate was relaxing with some drinks after a busy week featuring multiple red carpet events. 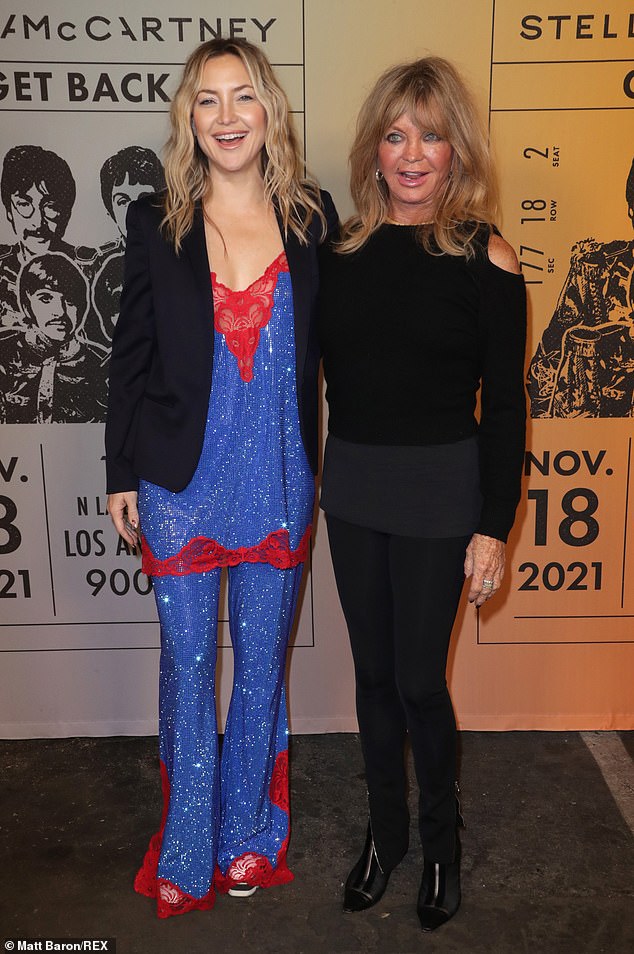 Staying busy: She was relaxing with some drinks after several red carpet appearances. She joined her mother Goldie Hawn, 76, on Thursday at Stella McCartney’s Get Back collection launch 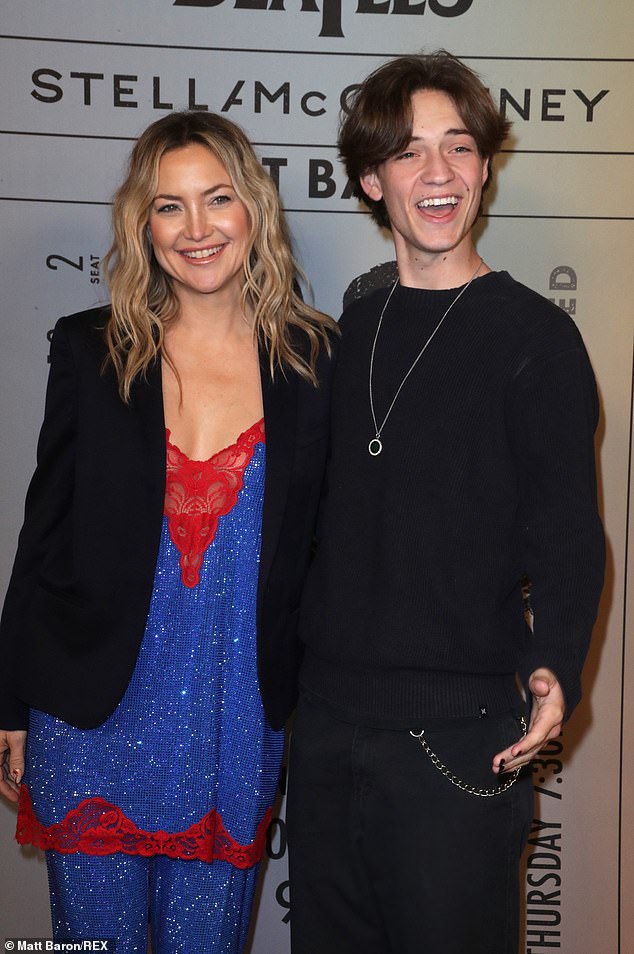 Family affair: There were three generations of family present, as she also came with her son Ryder Robinson, 17, whom she shares with her ex-husband Chris Robinson

On Thursday, she made a striking appearance at the launch of Stella McCartney’s new Get Back collection.

The designer — and daughter of Paul McCartney — had crafted a Beatles-inspired collection with plenty of eye-catching ensembles inspired by 1960s fashions.

Kate had all eyes on her in an outfit that leaned more toward the 1970s with is sparkling blue sequins and contrasted red lace trim.

The event featured three generations of her family, as she also brought along her mother Goldie Hawn, 76, and her son Ryder Robinson, 17, whom she shares with her ex Chris Robinson of the Black Crowes.

Kate also shares her son Bingham, 10, with her ex Matthew Bellamy from the rock band Muse, and her daughter Rani Rose, three, whom she shares with fiancé Danny Fujikawa. 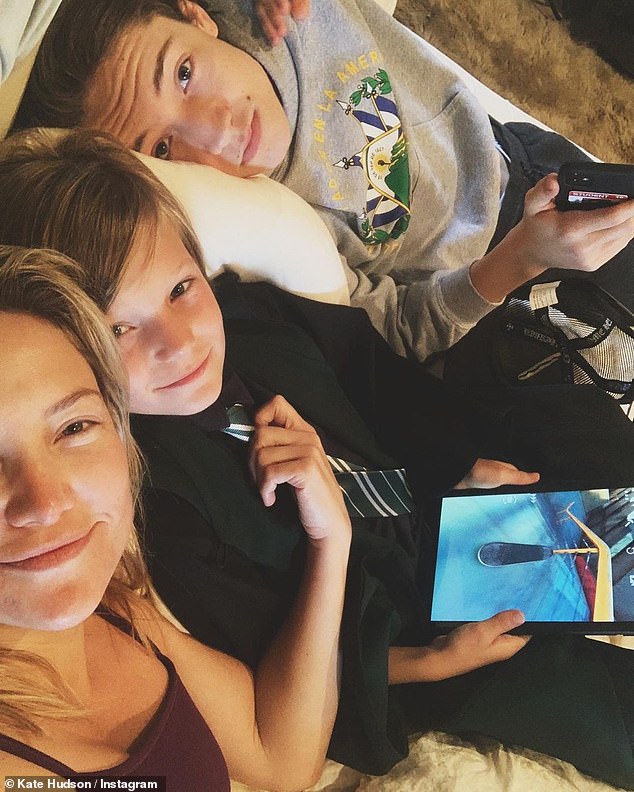 Large family: Kate also shares her son Bingham, 10, with her ex Matthew Bellamy from the rock band Muse; pictured in the center 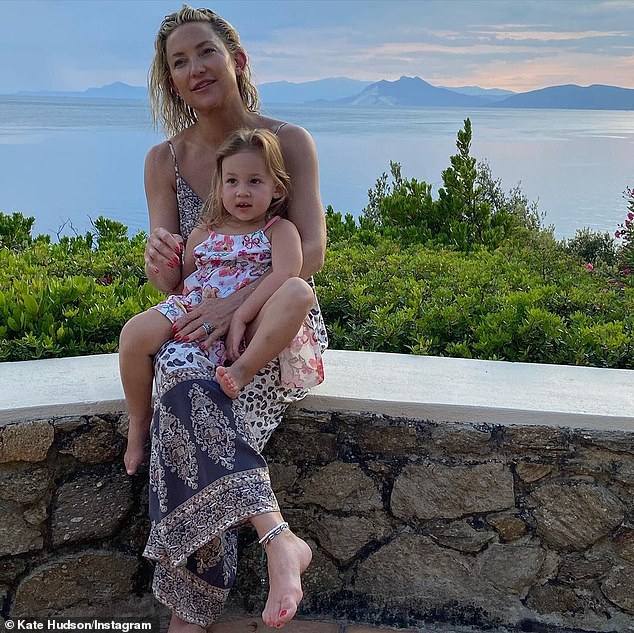 New love: She and her fiancé Danny Fujikawa welcomed their daughter Rani Rose in 2018

On Friday, Kate delved into how she keeps her phenomenal figure in shape while speaking with People.

She admitted that she wasn’t able to lose her pregnancy weight after giving birth to Rani Rose in 2018 with her previously exercise regimen, so she opted for something new.

‘I’m definitely challenging myself in new ways, which I need,’ she said. ‘I like to be able to set new goals to see what I can accomplish, and I love how flexible and strong I feel after a good workout, especially doing Pilates, which never gets easier.’

She clarified that she doesn’t deprive herself of food and drink, but has managed to simple increase the intensity of her workout.

It also helps to find some time for physical activity ever day, even if it’s something modest.

‘I need to be moving to feel good,’ she explained. ‘Even just making time for a little movement everyday — going for a walk, doing a few minutes on the treadmill, some Pilates, or if I have more time for it, I love hot yoga.’ 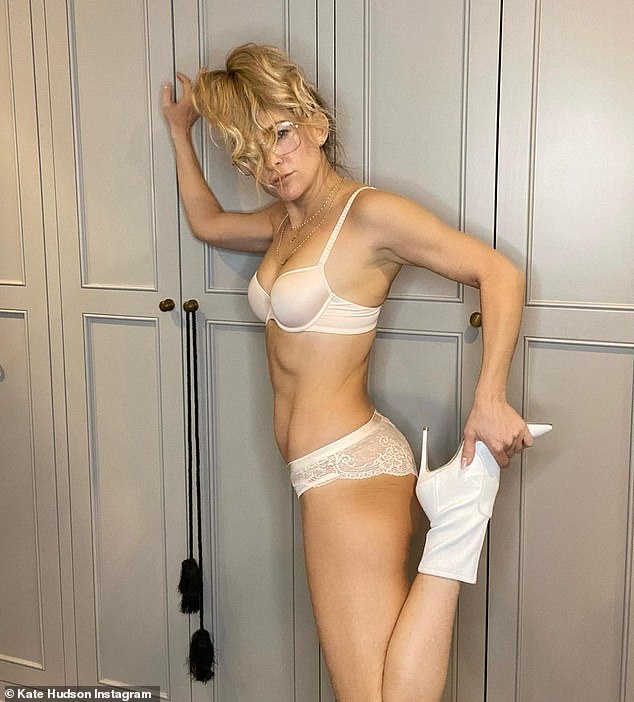 Staying fit: On Friday, Kate opened up to People about increasing the intensity of her workouts after she had trouble bouncing back to her old shape after giving birth to Rani Rose