Pregnant Kate Lawler, 40, displays her baby bump at week 25 as she details the highs and ’embarrassing’ lows of expecting her first child

Kate Lawler gave followers another insight into her pregnancy on Monday morning as she took to Instagram with a picture of her growing baby bump.

The former Big Brother contestant is expecting her first child with fiancé Martin, with the baby expected in February 2021.

And Kate, 40, detailed the highs and lows of pregnancy – among them cellulite, flatulence and an inevitable lack of sleep – while posing for a side shot of her bump in a grey bra and matching underwear.

She’s expecting: Kate Lawler gave followers another insight into her pregnancy on Monday morning as she took to Instagram with a picture of her growing baby bump

Captioning the selfie, in which she affectionately cups her stomach with a free hand, she wrote:  ’25 weeks today. Question. When do you consider the third trimester to start? I’ve read 26 weeks, 27 and 28 weeks!

‘Because I’m having a c-section, I won’t go over 39 weeks so if you divide 39 into 3, that’s 13 weeks per trimester, meaning I’ve just entered the penultimate week of my second trimester. ⁣

‘Our baby is now considered ‘viable’ which means the poop nugget could survive if born right now and given the right support. Obviously an early arrival isn’t what I want, but it’s good to know that our baby would be in with a fighting chance.⁣’ 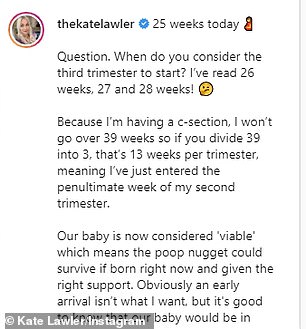 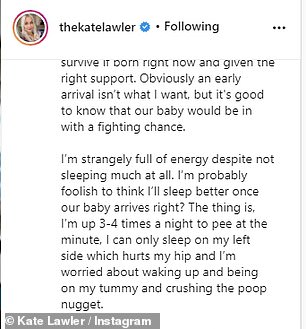 Candid: Kate detailed the highs and lows of pregnancy in a lengthy post shared with her fans 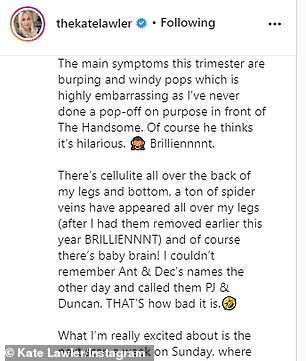 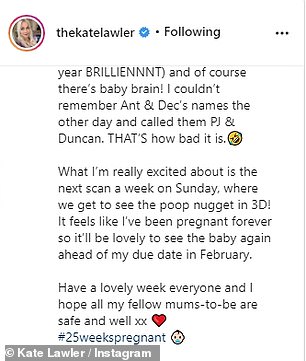 Awkward: Kate also revealed she was suffering from unfortunate flatulence, much to her fiancé Martin’s amusement

Documenting her pregnancy symptoms, she added: ‘I’m strangely full of energy despite not sleeping much at all. I’m probably foolish to think I’ll sleep better once our baby arrives right?

‘The thing is, I’m up 3-4 times a night to pee at the minute, I can only sleep on my left side which hurts my hip and I’m worried about waking up and being on my tummy and crushing the poop nugget. ⁣

‘The main symptoms this trimester are burping and windy pops which is highly embarrassing as I’ve never done a pop-off on purpose in front of The Handsome. Of course he thinks it’s hilarious. Brilliennnnt. ⁣ 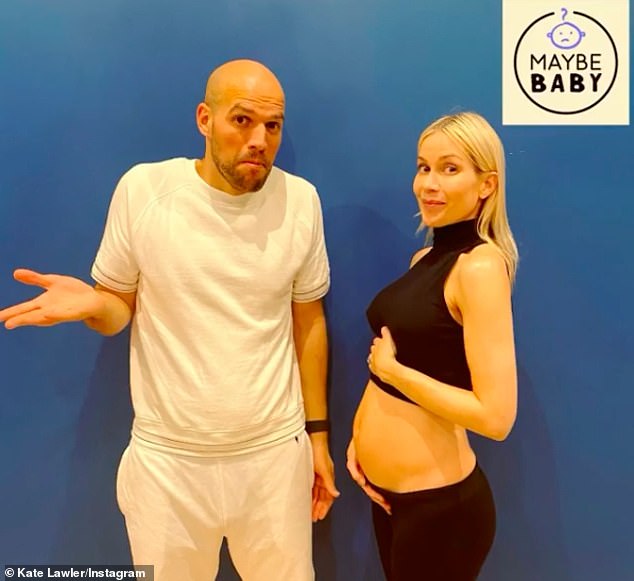 ‘There’s cellulite all over the back of my legs and bottom, a ton of spider veins have appeared all over my legs (after I had them removed earlier this year BRILLIENNNT) and of course there’s baby brain! I couldn’t remember Ant & Dec’s names the other day and called them PJ & Duncan. THAT’S how bad it is.’

Despite the inevitable changes to her body, Kate admitted she was looking forward to her next ultrasound.

She wrote: ‘What I’m really excited about is the next scan a week on Sunday, where we get to see the poop nugget in 3D! It feels like I’ve been pregnant forever so it’ll be lovely to see the baby again ahead of my due date in February. ‘