The parents of Tory activist Kate Maltby have praised her for speaking out against Damian Green as the deputy prime minister was made to resign last night.

Ms Maltby, 31, last month accused the MP of inappropriate advances in a London pub, forcing a sleaze inquiry that would eventually lead to his downfall.

Days after Ms Maltby’s claims were published, it was reported that police had found ‘extreme pornography’ on Mr Green’s office computer during a 2008 raid.

The inquiry, carried out by the Cabinet Office and published yesterday, ruled Mr Green had lied about the raid in public statements and also found Miss Maltby’s claims to be ‘plausible’. 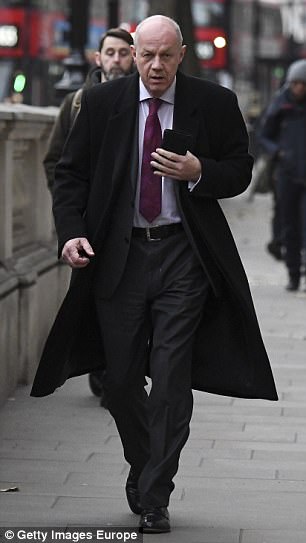 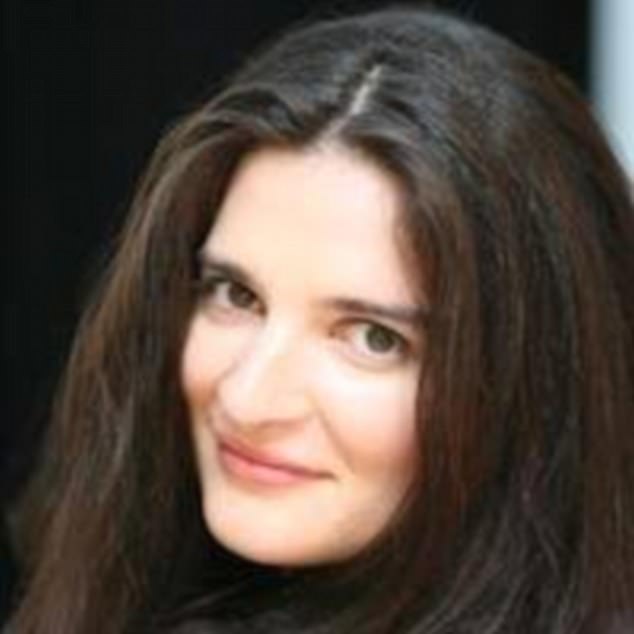 Ms Maltby (pictured) last month accused the MP of inappropriate advances in a London pub, forcing a sleaze inquiry that would eventually lead to his downfal

She last night declined to comment, but her parents, Colin and Victoria Maltby, issued a statement to say they were ‘proud of her’.

They added: ‘We are pleased that the Cabinet Office has concluded its enquiry into the conduct of Damian Green.

‘We are not surprised to find that the inquiry found Mr Green to have been untruthful as a minister, nor to that they found our daughter to be a plausible witness.

‘We have received many supportive messages from people near and far who appreciate Kate’s courage and the importance of speaking out about the abuse of authority.

‘We join with them in admiring her fortitude and serenity throughout the length of the investigation and despite the attempted campaign in certain sections of the media to denigrate and intimidate her and other witnesses. We are proud of her.

‘We have ourselves known of these incidents since they first occurred and have fully supported Kate in the responsible manner in which she has reported them.’ 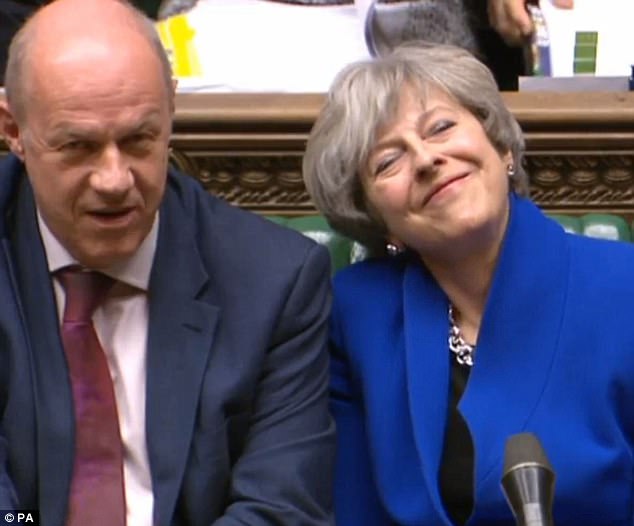 Mr Green, a close ally of Theresa May (pictured), resigned last night after he failed to tell the truth about pornography found on his computer

In his resignation letter last night, Mr Green said he did not recognise Miss Maltby’s account of their meeting in a London pub in 2015, when she claims he touched her knee and made suggestive comments.

But he added: ‘I clearly made her feel uncomfortable and for this I apologise.’ Mrs May said Mr Green was right to concede this point.

Last month, Miss Maltby said he told her ‘his wife was very understanding’ and put a ‘fleeting hand against my knee – so brief, it was almost deniable’.

Writing in the Times, she said the encounter with Mr Green left her feeling ‘angry’.

Then following the publication of a photograph of her wearing a corset, Mr Green, who was not a minister at the time, text her.

The message read: ‘Long time no see. But having admired you in a corset in my favourite tabloid I feel impelled to ask if you are free for a drink anytime?’

At the time, Mr Green said it was ‘absolutely and completely untrue that I’ve ever made any sexual advances on Ms Maltby’. 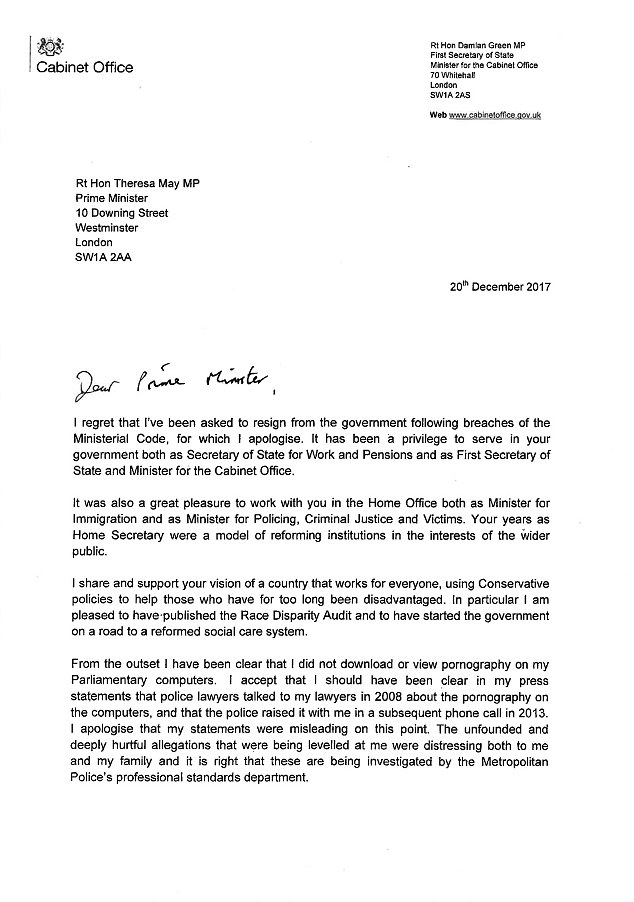 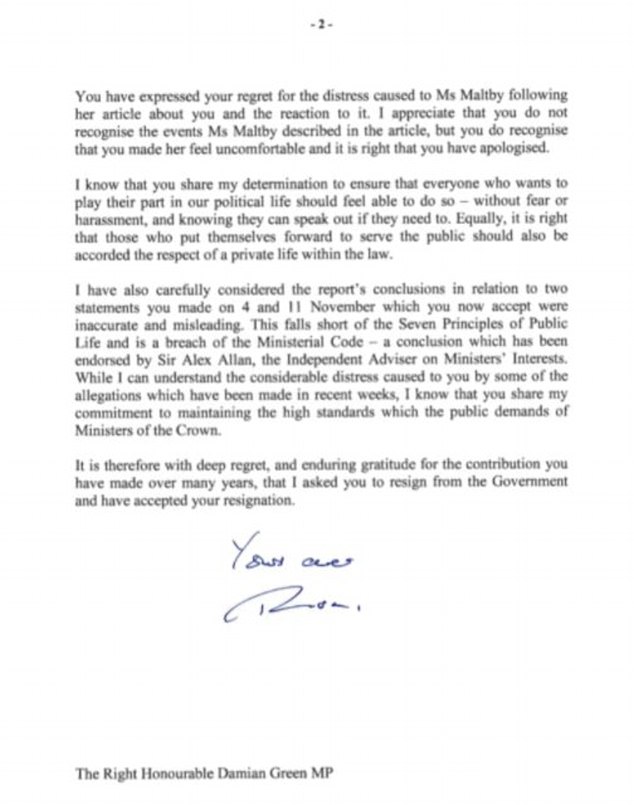 Mrs May accepted his resignation and wrote: ‘I’m extremely sad to be writing this letter, we have been friends and colleagues throughout our whole political lives 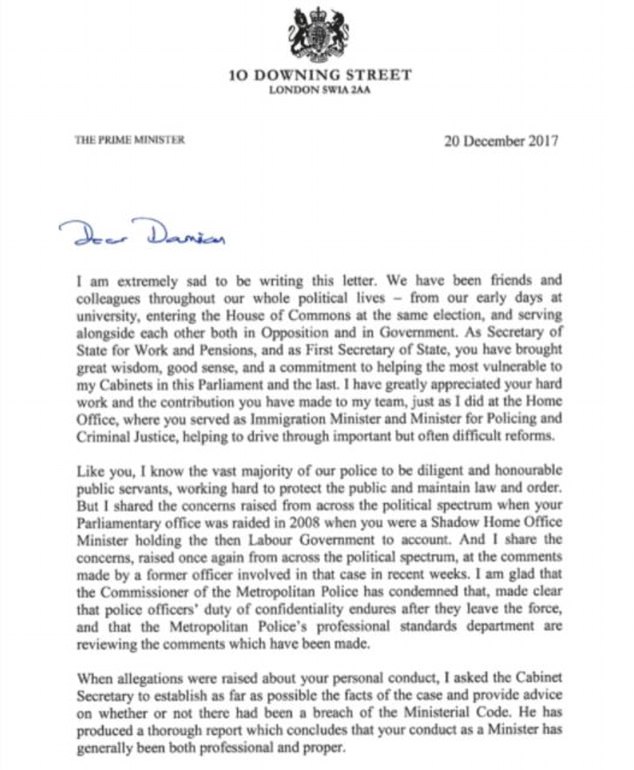 Theresa May’s response to the resignation letter from Mr Green, her closest friend in politics 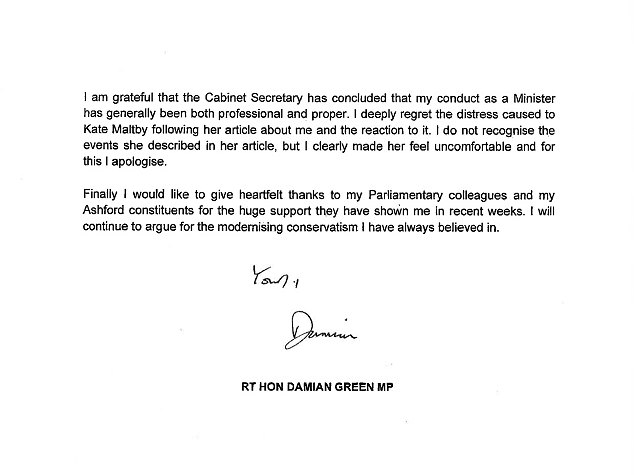 Mr Green is the third cabinet minister to be forced to quit in just six weeks after their careers have been hit by scandal. Sir Michael Fallon and Priti Patel resigned as defence secretary and international development secretary respectively

Mr Green, a close ally of Theresa May, resigned last night after he failed to tell the truth about pornography found on his computer.

The Cabinet Office investigation said he had issued two ‘inaccurate and misleading’ statements, denying he knew about the discovery made in a botched police raid on his Commons office in 2008.

Sir Alex Allen, Theresa May’s adviser on ministerial interests, said the lack of candour amounted to two breaches of the ministerial code. This left the PM with no choice but to ask her friend of 30 years and deputy to resign.

A friend of Mr Green said the police had ‘got their man after a nine-year vendetta’.

His departure is a bitter blow to the PM, who relied heavily on her old university friend. In a letter to him last night, she said she was ‘extremely sad’ about his 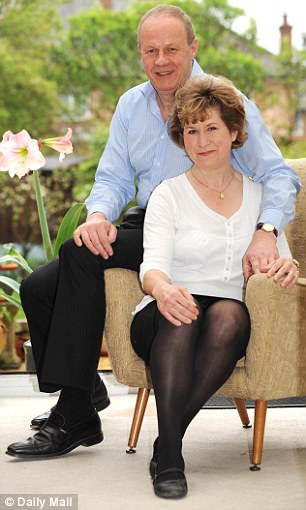 Damian Green, pictured with his wife Alicia, said the allegations against him have been deeply hurtful to him and his family

Police raid Damian Green’s parliamentary office as part of a probe into leaks of embarrassing material from the Home Office. The probe is led by Bob Quick, then Assistant Commissioner at Scotland Yard. The raid sparks a huge political backlash and allegations the police have been politicised.

Quick apologises after claiming the Tory Party was behind an embarrassing story about the wedding chauffeur business run by his wife from their home. It follows a war of words in which he accused the Conservatives of behaving in a ‘wholly corrupt way’ by attacking his inquiry.

Quick resigns after walking down Downing Street inadvertently exposing details of a secret briefing note, which are captured by photographers. It forces a major undercover terror operation involving several arrests to be brought forward.

Green is cleared of any criminal activity relating to the leaks by the CPS who conclude the documents leaked were not secret and not a threat to national security.

Reports emerge of a list of ‘sex pest’ MPs drawn up by female staff in Westminster said to include the names of several ministers.

In an article for The Times, Tory activist Kate Maltby, a family friend of Green’s, accuses him of sexual harassment.

She says he ‘fleetingly’ touched her knee in 2015 and sent a ‘suggestive’ text message after she was pictured wearing a corset in the newspaper. Miss Maltby said he mentioned that his wife was ‘very understanding’ and she then ‘felt a fleeting hand against my knee – so brief it was almost deniable’.

‘He was a university contemporary of my mother. He offered me career advice and in the same breath made it clear he was sexually interested. 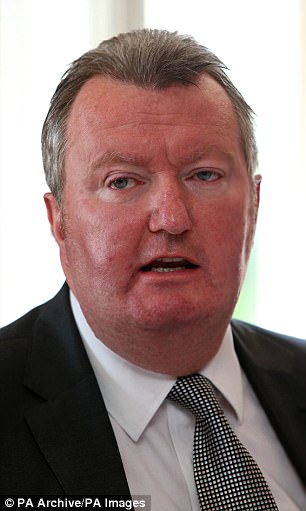 ‘It was not acceptable to me at the time and it should not be acceptable behaviour in Westminster in the future.’ He flatly denies making sexual advances, calling the claim ‘untrue and deeply hurtful’.

A Cabinet Office probe is launched. On the same day, Sir Michael Fallon resigns as Defence Secretary over claims about his conduct with women.

He calls Quick a ‘tainted and untrustworthy source’ and the allegations ‘false disreputable political smears’. Quick denied he approached the paper and says they approached him about the story.

It emerges that Sue Gray, the director-general of propriety and ethics at the Cabinet Office, has asked officials if there is evidence of attempts to access pornography from computers used by Mr Green since he became a minister in 2010.

Former Scotland Yard detective Neil Lewis, who was involved in the original leaks probe, tells the BBC he was ‘shocked’ by the amount of pornography found on Green’s computer. His interview sparks a furious backlash from Tory MPs who accuse officers of releasing private information to undermine a Cabinet minister. Brexit Secretary David Davis weighs in behind Green.

Mr Green is forced to quit after the Cabinet Office probe finds he breached the ministerial code with his misleading statements about the pornography found on his computer.