The Duchess of Cambridge called father-in-law Prince Charles ‘grandpa’ when she greeted him at a G7 reception, a lipreader has revealed.

Kate Middleton, 39, used the family nickname while speaking to Charles, 72, at a reception at the Eden Project, in Cornwall, on Friday night.

The Duchess of Cambridge was caught on camera saying: ‘Hello Grandpa! How are you?’ as Prince Charles turned to speak to her on arrival.

Kate Middleton, 39, reportedly used the nickname while greeting Charles, 72, at a reception at the Eden Project on Friday night. Pictured, the moment when Kate called Charles ‘grandpa’

The Queen, Prince Charles, the Duchess of Cornwall and the Duke and Duchess of Cambridge arrived at the Eden Project together, with Kate and William following behind the more senior members of the royal family.

As they came to a stop at the entrance, Charles turned back to smile at his son and daughter-in-law, at which point Kate gave him the enthusiastic greeting.

Speaking to Cornwall Live, the lipreader, who was not named, also picked up on an exchange between the Duchess of Cornwall and the Queen about a shawl.

The Queen replied, ‘you have it’, to which Camilla responded: ‘Are you sure?’ Prince Charles tried to put an end to the conversation by saying: ‘She doesn’t want it.’

Britain sought to dazzle the world’s most powerful with a royal charm offensive at a no-holds-barred reception at the Eden Project in Cornwall on Friday night. 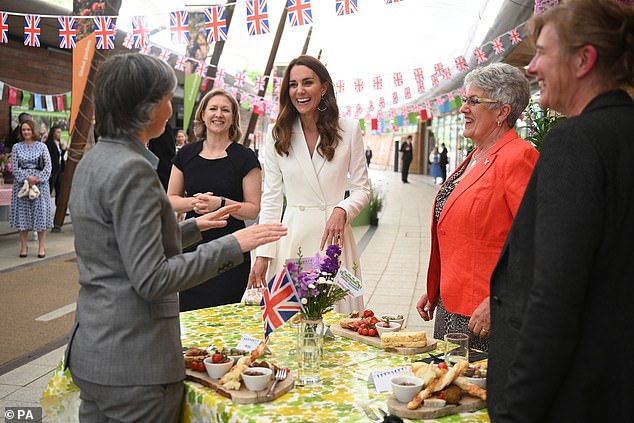 The Duchess of Cambridge joined senior royals for events around the G7 summit. Pictured, at an event at the Eden Project in celebration of The Big Lunch initiative on Friday

Kate cut an elegant figure in a mid-length cream Alexander McQueen gown – thought to have cost £3,000 – while Camilla opted for a long sleeve black and white dress.

The Queen fit the horticultural theme of the venue in a dress patterned with flowers.

The Royals were at the centre of Britain’s diplomatic mission to woo the US as Mr Johnson pushes for a quick free trade deal with President Biden as well as a quarantine-free travel corridor this summer.

The Queen hosted the President and First Lady at Windsor Castle yesterday.

President Biden met the Queen at the dais in the quadrangle, and a Guard of Honour, consisting of the Queen’s Company First Battalion Grenadier Guards, performed a Royal Salute.

The Officer Commanding the Guard of Honour, Maj James Taylor, accompanied Mr Biden, along with Maj Gen Christopher Ghika, in an inspection of the Honour Guard. 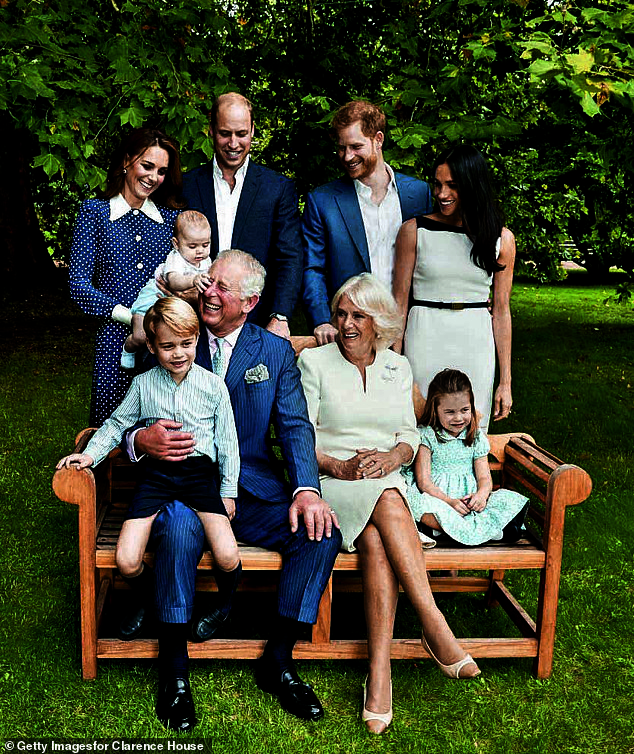 The President then entered the castle through the Sovereign’s Entrance at 5.18pm to enjoy tea with the Queen.

Mr Biden spoke to the press before he took off for Brussels, telling reporters the monarch was ‘very gracious’, adding: ‘She reminded me of my mother.’

Mr Biden said of the Queen: ‘I don’t think she’d be insulted but she reminded me of my mother, the look of her and just the generosity.’

‘We had a long talk,’ Biden said, ‘and she was very generous.’

The President revealed that the Queen asked him about the leaders of Russia and China, Vladimir Putin and Xi Jinping. He said she also asked what life in the White House was like.

‘I said, this is… we could fit the White House in the courtyard’, Mr Biden added, referring to the Windsor Castle.

Asked if he had invited the Queen to the White House, he said ‘yes’.