When the Duke and Duchess of Cambridge announced that they were naming their new-born son Prince Louis Arthur Charles commentators highlighted the historical links to the Royal family.

While the name Louis is widely believed to be a tribute to Prince Philip’s uncle Lord Mountbatten, who was killed by the IRA in 1979, the name Charles was considered to be a nod to William’s father.

But, the Mail Online can reveal that the Duchess of Cambridge also has strong connections to the names Arthur and Charles in both her maternal and paternal family trees.

Not only is her father Michael distantly related to the children’s author Arthur Ransome, who wrote Swallows and Amazons, but her maternal great-grandfather – Carole’s grandfather – was called Charlie Goldsmith.

Michael Middleton’s associations to the names Arthur and Charles come from his great-great grandfather Frank Lupton, a mill owner, who created the family fortune.

They lived in Beechwood, a sprawling Victorian mansion in the village of Roundhay, seven miles north of Leeds, which they bought from Sir George Goodman, who had served as the city’s mayor. And they were wealthy enough to employ six servants, socialise with the great and good of Leeds, and involve themselves in the politics of the day. 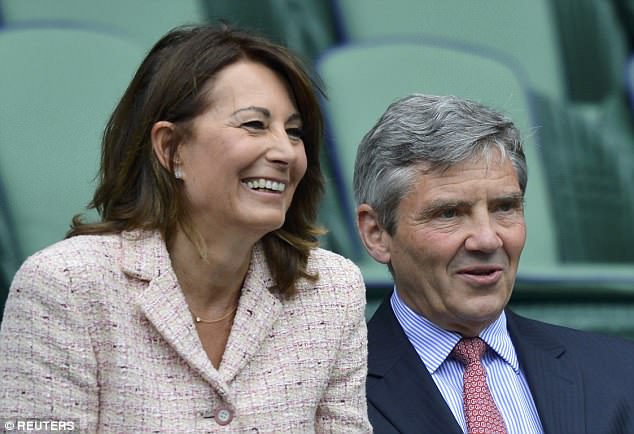 The parents of Catherine, Duchess of Cambridge, Carole and Michael Middleton, have a history of people being named Arthur and Charles in their family trees 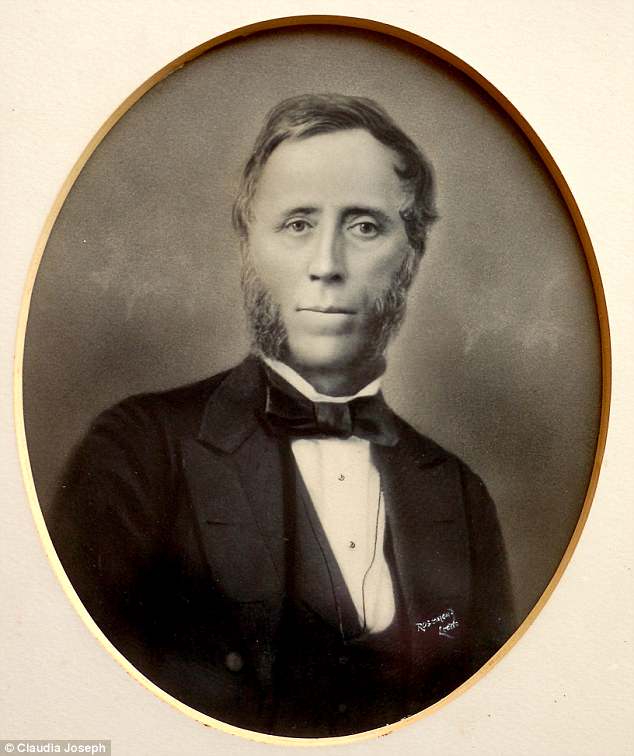 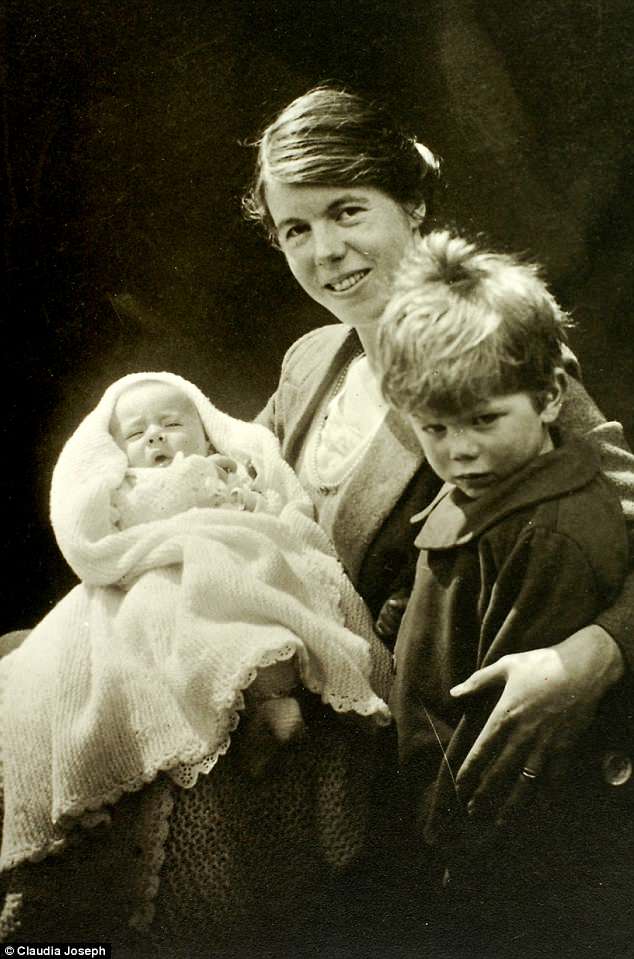 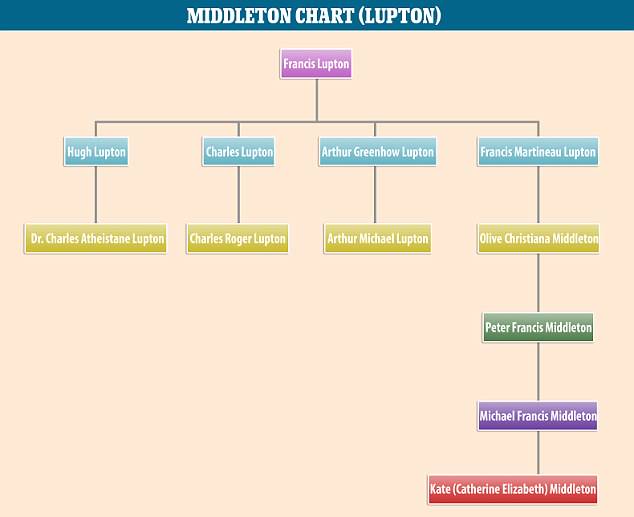 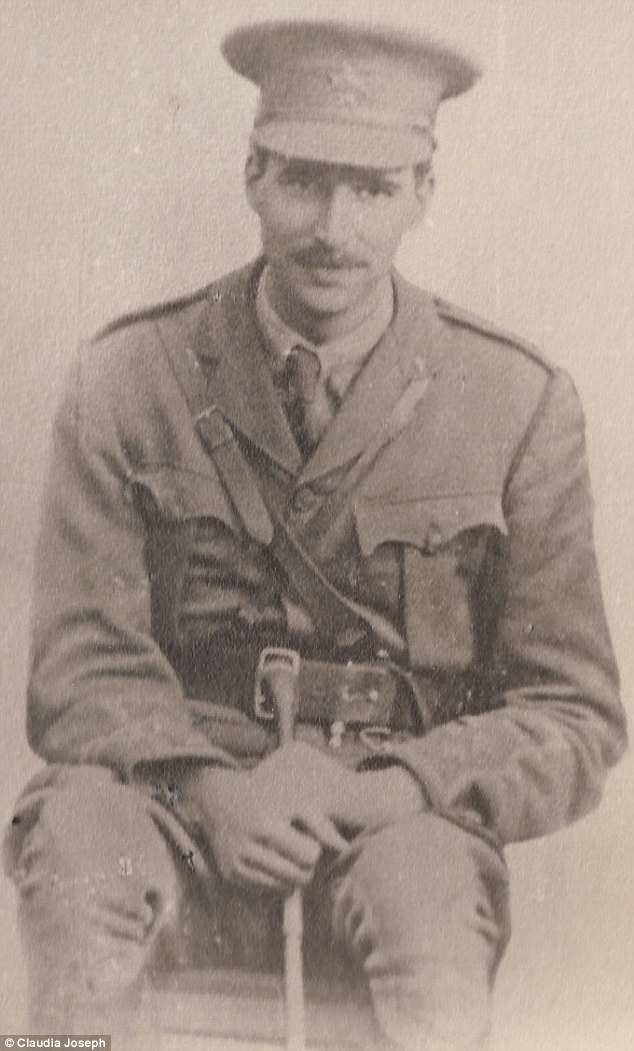 Francis Lupton was killed during the First World War and is an ancestor of the Duchess of Cambridge, who announced her baby’s name today 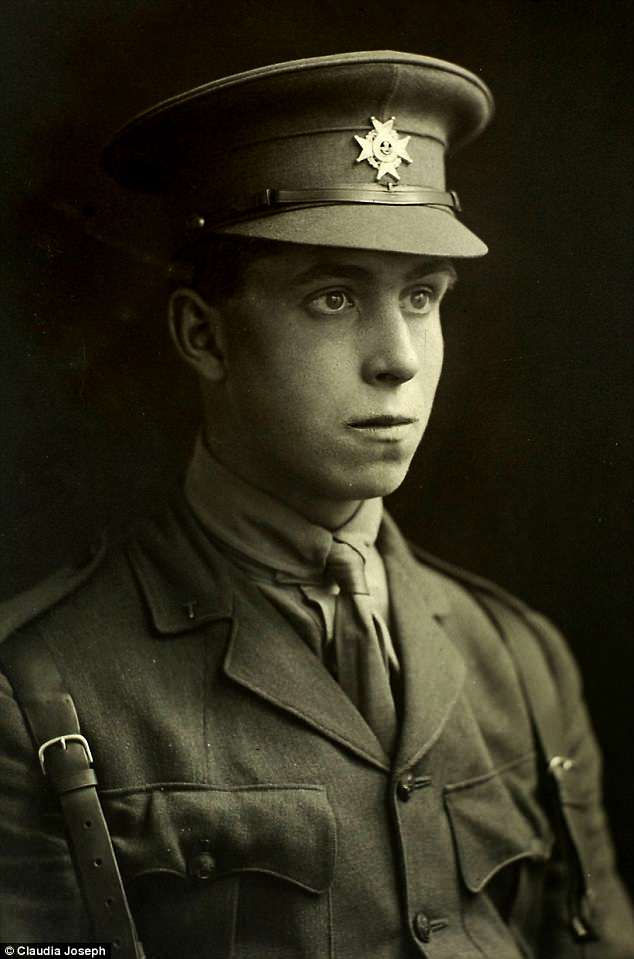 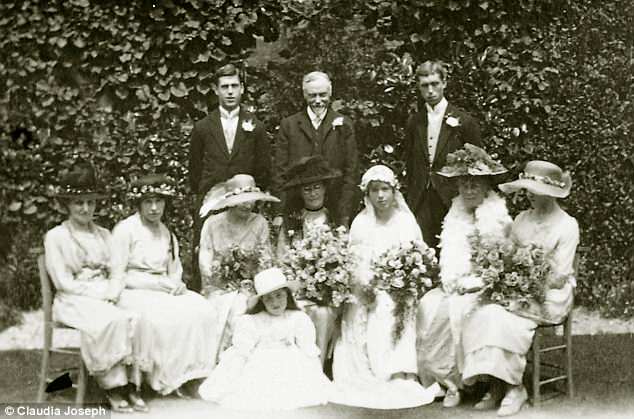 Their son Charles was the first Lupton to go to public school, setting a tradition that would carry right through the family to Kate.

All four brothers became prominent figures in Leeds public life: Francis and Arthur ran the family firm; Charles headed legal firm Dibb Lupton and Hugh was chairman of Hathorn Davey & Co, a hydraulic engineering company. Together, the tentacles of their influence reached across the city.

But the family was also struck by tragedy.

Arthur’s wife Harriot, who was a cousin of Beatrix Potter’s mother Helen, died in childbirth in 1888, at the age of 35, before her famous cousin published her first children’s book The Tale of Peter Rabbit, leaving her husband a widower with three children Arthur, two, Elinor, one, and baby Elizabeth. 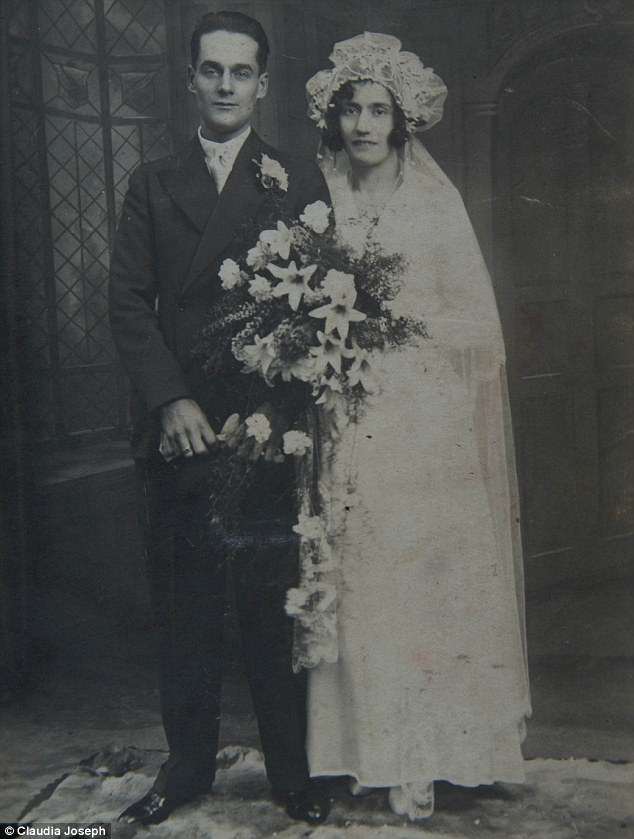 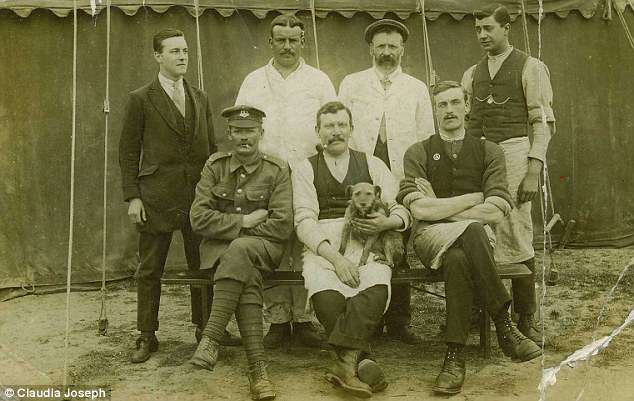 Four decades later, catastrophe struck again – and Arthur, who was pro-vice-chancellor of Leeds University, was again left bereft – when his oldest son Arthur, was involved in a horrific riding accident.

On 14 December 1928, while riding with the Bramham Hunt, his horse failed to take a fence, throwing him to the ground, rolling on top of him and fracturing his pelvis. Within 11 months he was dead. A year later his father Arthur succumbed to grief.

It was Hugo Lupton, son of Arthur’s younger brother Hugh and cousin of Kate’s great-grandmother Olive, who was responsible for linking the Luptons to Arthur Ransome.

An old Wellingtonian and Trinity College alumnus, who won a Military Cross for his service in France, he married the author’s sister Joyce in 1920 and had four children Francis, in 1921, Arthur, in 1924, Cecily, in 1927, and Geoffrey, in 1930, ensuring the name Arthur went down through the generations. 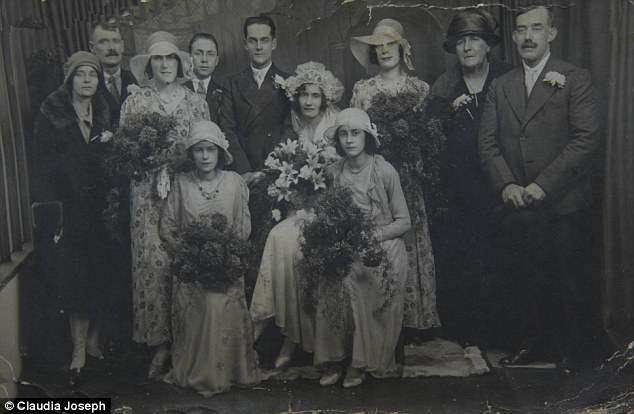 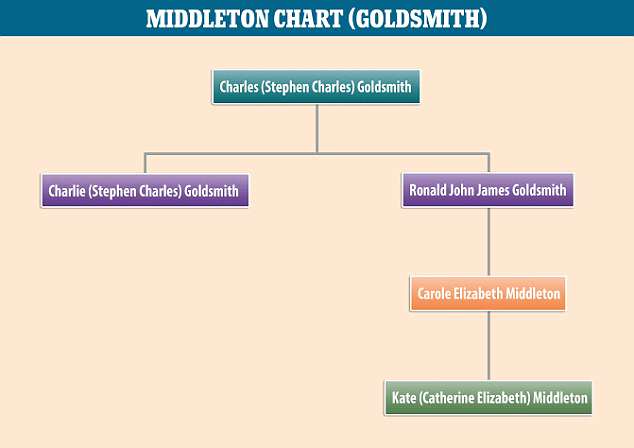 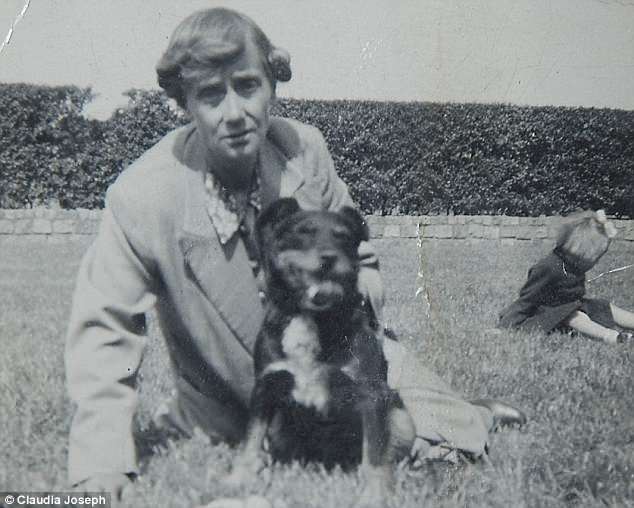 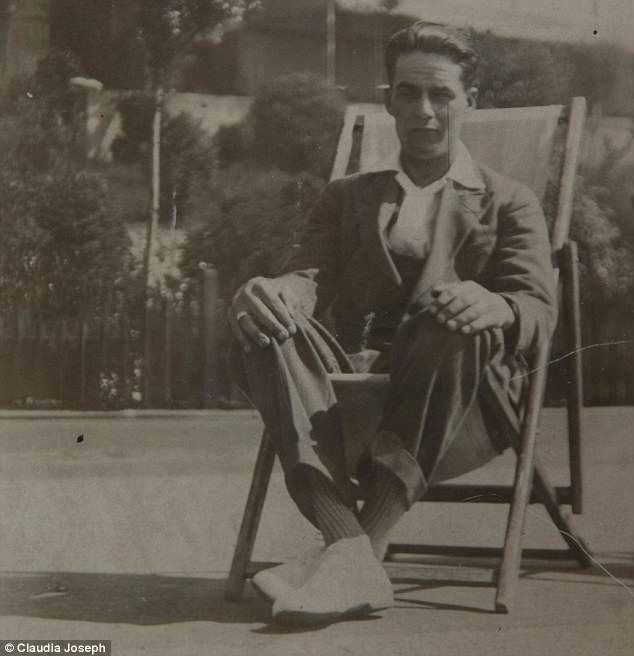 On Carole’s side of the family, it is the name Charles that is significant. Her paternal grandfather and uncle were both known as Charlie, although they were both christened Stephen Charles.

The elder Charlie Goldsmith – Kate’s great-grandfather – was born at home in Acton, Middlesex, in 1886, and brought up in Southall. When he left home he lived in Uxbridge, where he worked as a mechanic and met his future wife Edith.

A tiny woman, under 5 ft tall and weighing 7 stone, she was disfigured by a huge scar on her torso, which she had got during a narrow escape from death when she was a toddler.

‘Grandad used to light his cigar in his big oil stove in the hall of the big house where they lived,’ his daughter Alice Tomlinson, the only one of his children still alive at 106 told me.

‘He would roll a piece of paper up and put it in the stove and light his cigar. of course, when he went out, my mum copied. She had a go doing the same thing and nearly burned herself to death.’

Charlie and Edith got married at Uxbridge Register office in 1909. She was four months pregnant with their eldest child, whom they named after his father.

When Charlie Jnr was five years old, his father signed up, serving in France with the Royal Fusiliers, initially in the trenches and afterwards in the cookhouse. He was one of Kitchener’s ‘shilling men’.

Luckily, he survived the war but returned home with emphysema. The father-of-six died in 1938, when his oldest son Charlie was 28 years old, and his youngest son, Kate’s grandfather Ronald was just six years old. His widow Edith was forced to move into a condemned flat and go to work at the local factory.

Less than a century later, their great-granddaughter is living in Kensington Palace.