They played siblings in the beloved 2006 romantic-comedy The Holiday.

But the as the actress received The Dilys Powell Award for Excellence in Film, she addressed the sexual abuse scandal that has been sweeping Hollywood, getting emotional and chocked up as she expressed her deep regret at having worked with certain filmmakers. 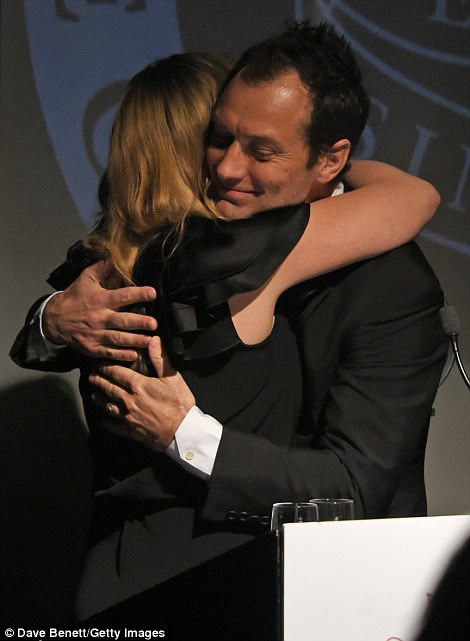 Proud moment: Kate Winslet was presented with The Dilys Powell Award for Excellence in Film from an old friend on Sunday night, as Jude Law joined the actress at the London Film Critics’ Circle Awards 2018

While not naming any names, she said: ‘There are directors, producers and men of power who have for decades been awarded and applauded for their highly regarded work by both this industry and moviegoers alike.

‘Indeed, many actors have had flourishing careers, due in part to roles played in their films. The message we received for years was that it was the highest compliment to be offered roles by these men.

‘As women around the world and from all walks of life, marched last weekend, once again joining together to speak out against harassment, exploitation and abuse, I realised that I wouldn’t be able to stand here this evening and keep to myself some bitter regrets that I have about poor decisions to work with individuals with whom I wish I had not.’

Glamorous: Kate looked gorgeous in a black jumpsuit, which was offset by a striking red lipstick

At this point, the actress got chocked up and had to turn away from the audience to briefly compose herself, before continuing: ‘It has become clear to me that by not saying anything, I might be adding to the anguish of many courageous women and men. Sexual abuse is a crime.

‘While it rests with the rule of law to pass judgement, it lies with all of us to listen to the smallest of voices and to never stop listening. Those who do have a voice are becoming afraid to say anything, because of intense scrutiny and criticism.

‘Nobody should be exempt of having a right to speak in support of vulnerable people. There are those who can speak so powerfully for those who are not able to do so themselves, and let us please not make this about which people express public regret.’ 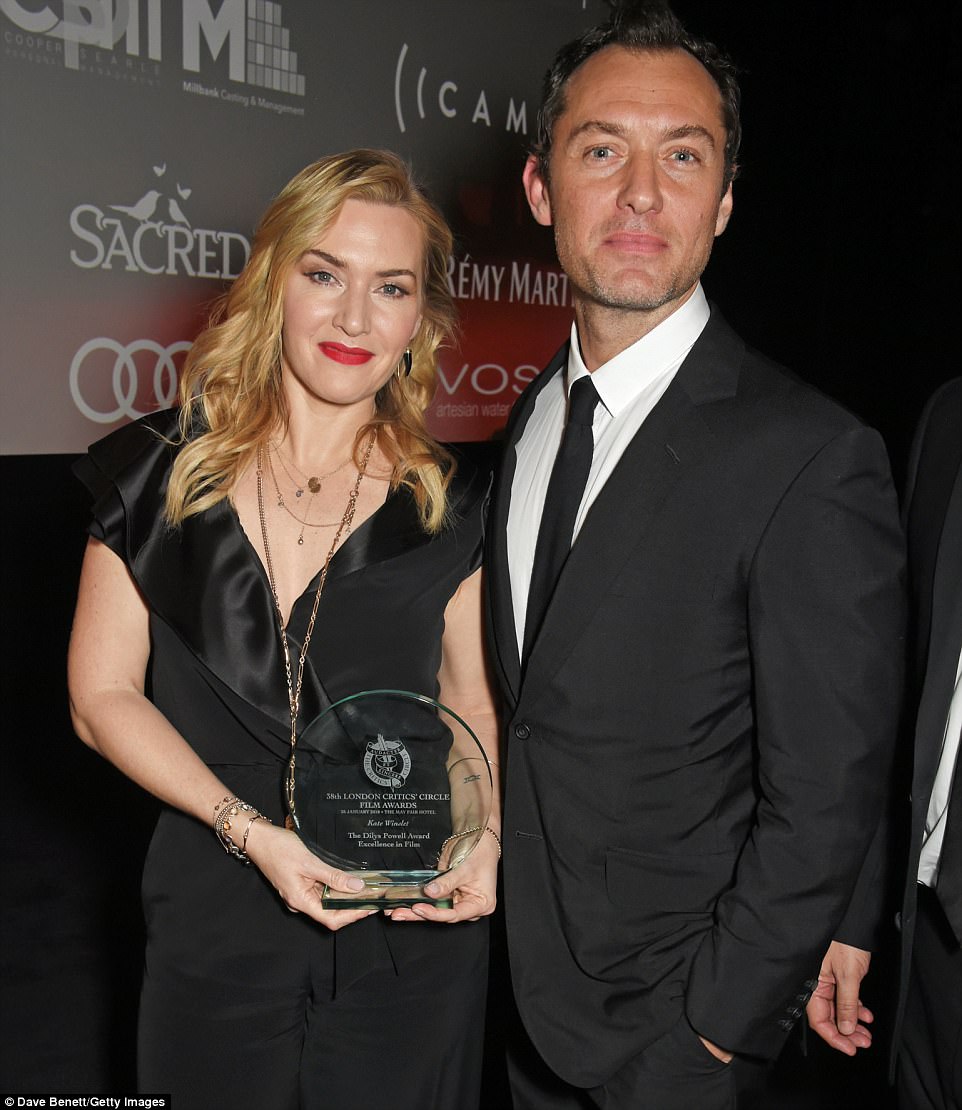 Old acting pals: Kate looked delighted with her award, and Jude looked proud to present it 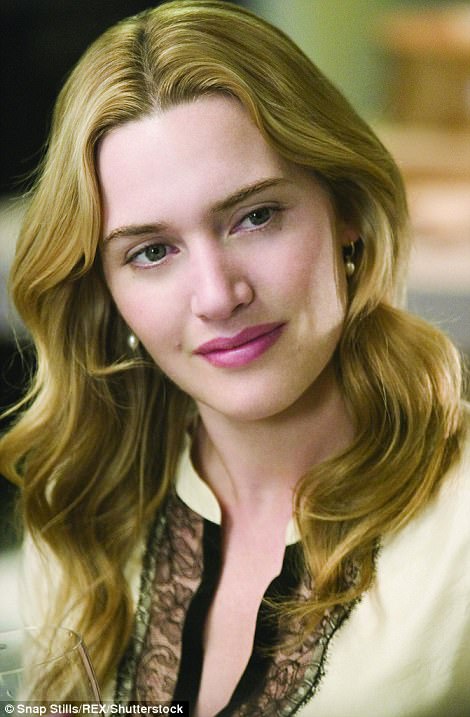 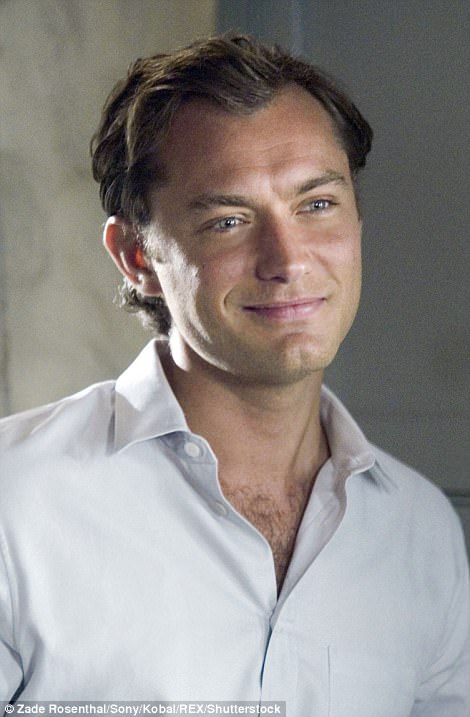 Before making her speech, Kate – who has worked with scandal-plagued Woody Allen and Harvey Weinstein in the past – shared an embrace with Jude at the podium.

In 2006’s The Holiday, in which they were co-stars, Kate played British journalist Iris who traded homes with transatlantic beauty Amanda, played by Cameron Diaz. 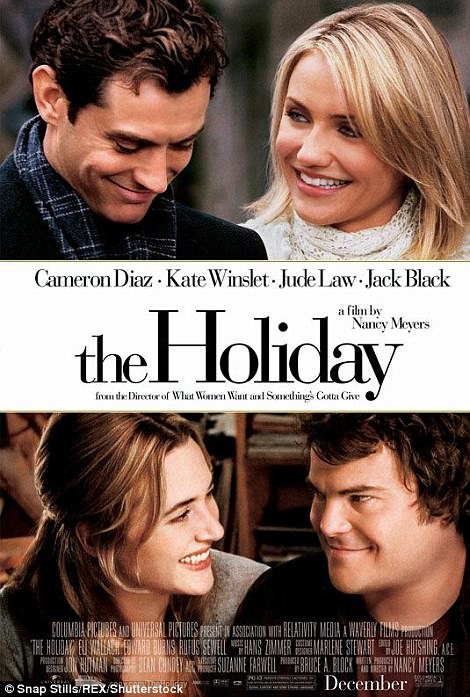 Love story: The love story captured the hearts of the nation

On the night, Kate looked thrilled with the acting accolade, on a night which also recognised Hugh Grant in a Supporting Actor role and rising star Daniel Kaluuya.

Kate looked classic in an all-black jumpsuit, offset by a striking red lipstick that added extra glamour to her evening ensemble.

Looking like she hadn’t aged a day, she maintained the same honey-coloured hair-do, which was coiffed around her shoulders in glossy waves.

And Jude looked similarly slick to his heartthrob character, this time dressed in a sharp black suit and skinny tie combo.

Fellow British actor Hugh was distinctly cheerful display on the red carpet, as he was accompanied by girlfriend Anna Eberstein at the star-studded event.

The dapper actor, 57, beamed as he posed with the former TV producer, 37, with whom he’s believed to be expecting his fifth child.

Putting on a suave display, Hugh slipped into crisp white shirt and a well-cut grey suit, completing his ensemble with a grey tie.

He grinned as he placed his arm lovingly around girlfriend Anna, who cut a chic figure in a black lace LBD, teaming it with tights and ankle boots.

Completing her look with a blazer and tousled blonde locks, the Swedish mother-of-two smiled happily at cameras as the posed ahead of the event. 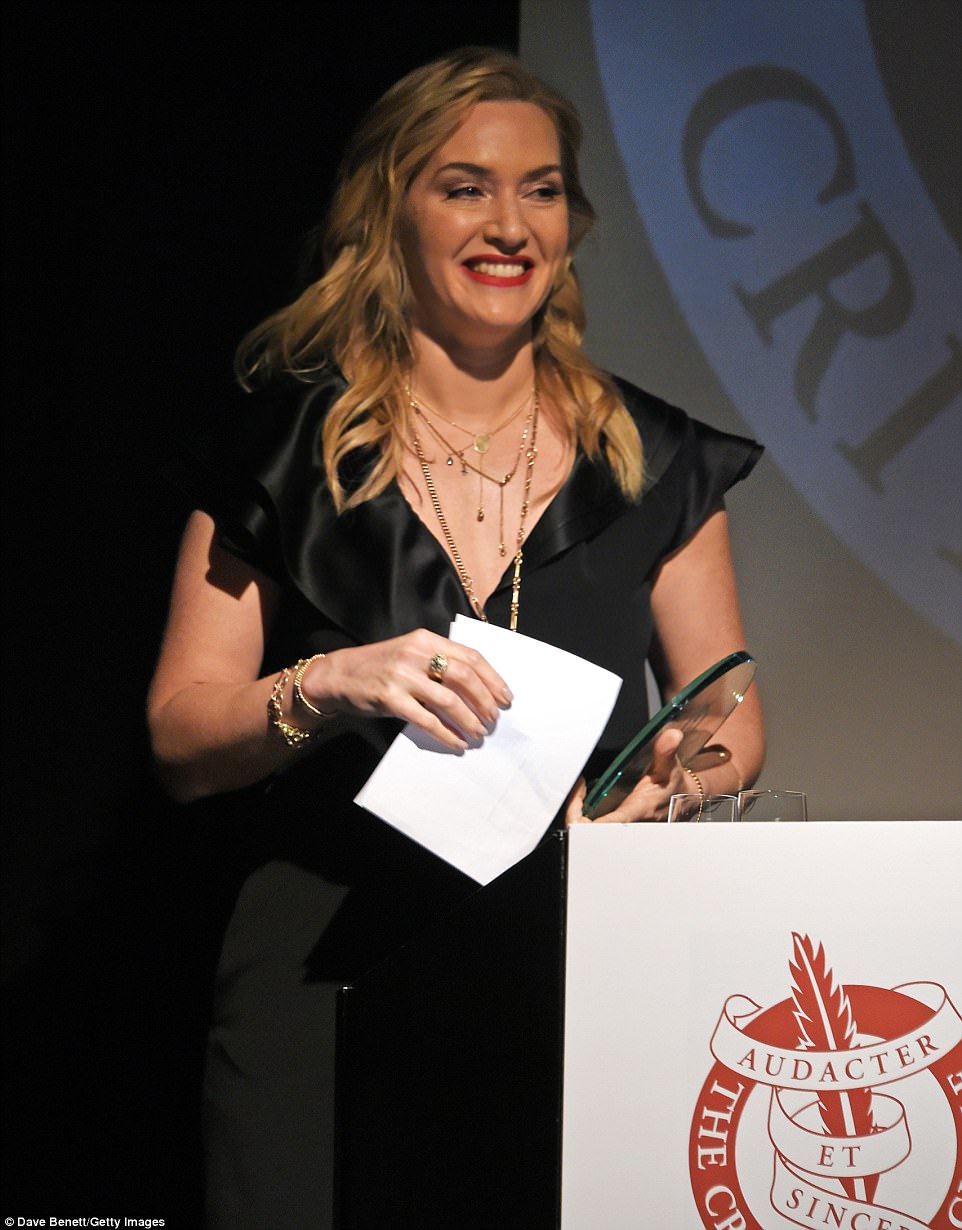 Thrilled: Kate had a small speech prepared when she took herself up to accept the award 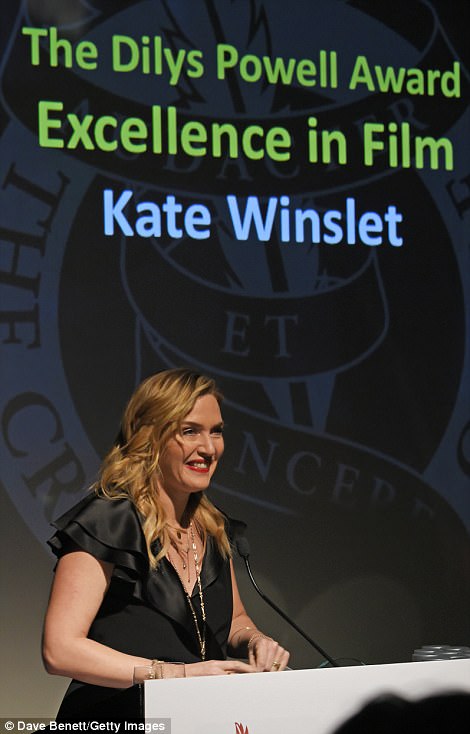 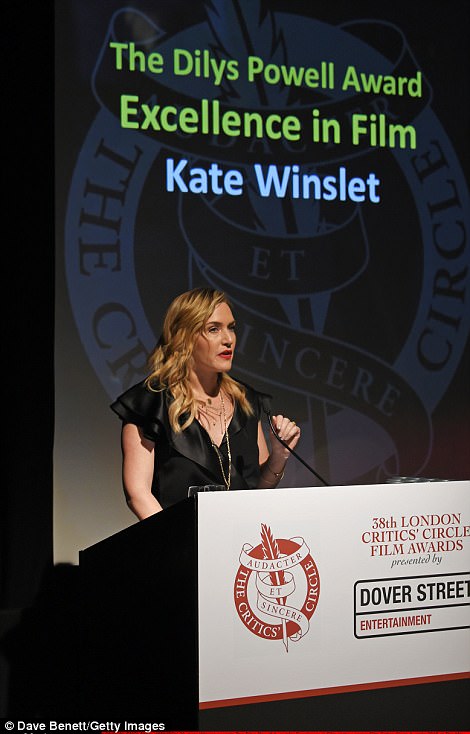 Making a speech: The actress took the stage at the 38th annual London Critcs’ Circle Awards 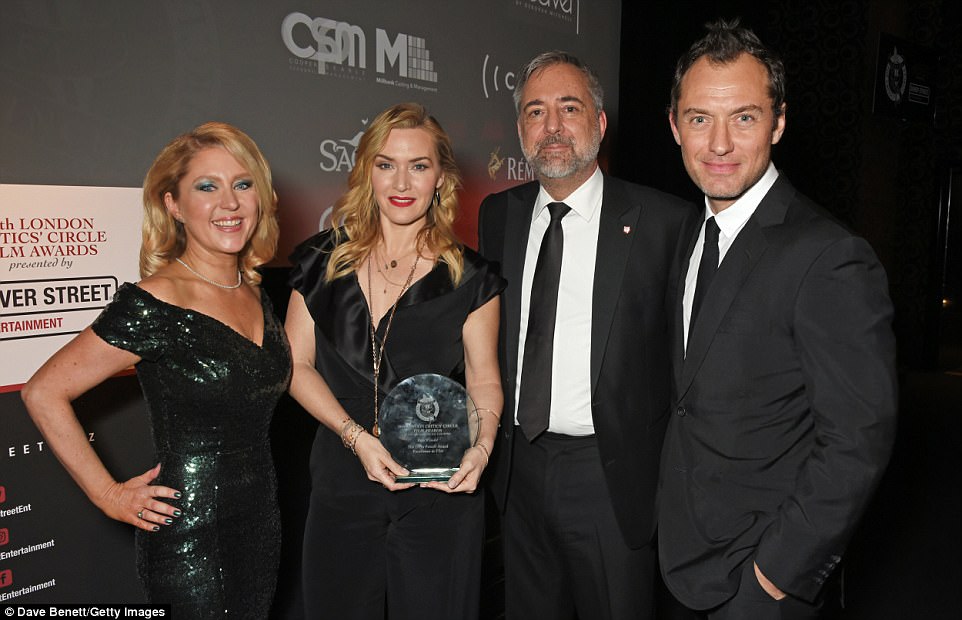 Despite keeping mum about any pregnancy news, Anna’s mother reportedly confirmed the news to a Swedish news outlet Aftonbladet when she said: ‘I’m very happy to be getting another grandchild. She’s due rather soon.’

Hugh and Anna have two young children together – a son John, six, and a second child born in December 2017, aged two.

He also has two other children – a daughter Tabitha, six, and son Felix, four, with Chinese beauty Tinglan Hong, 36, who he was initially thought to be dating before he met Anna.

The Four Weddings and a Funeral recently opened up about being dad to his four children during a Jess Cagle Interview. 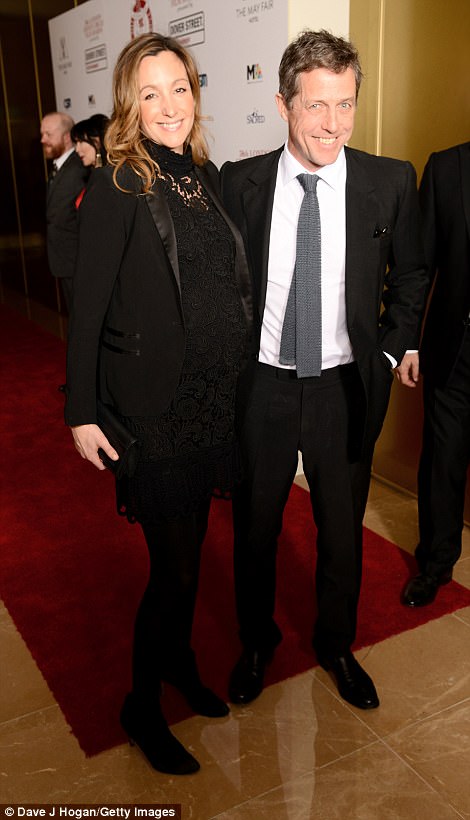 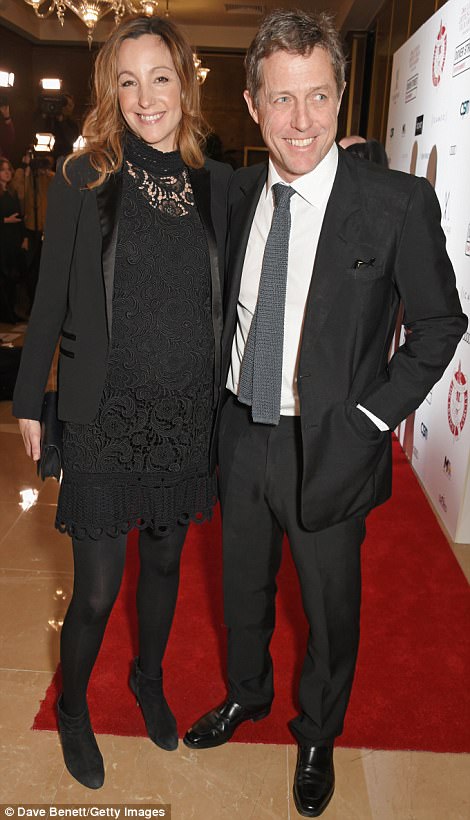 Proud father-to-be? Hugh Grant certainly put on a cheerful display as he cosied up to girlfriend Anna Eberstein at the star-studded London Film Critics’ Circle Awards 2018 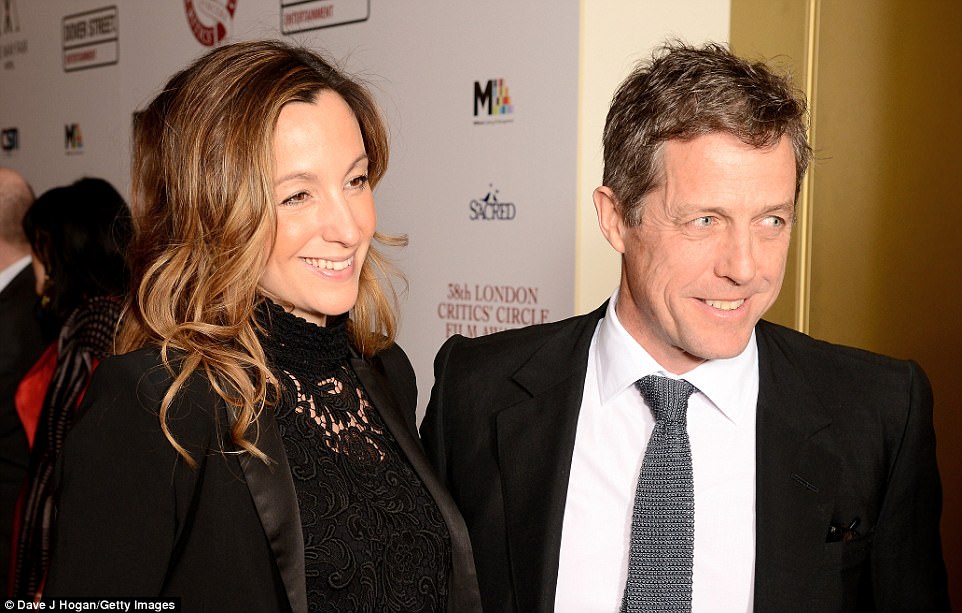 Star-studded: The dapper actor, 57, beamed as he posed with the former TV producer, 37, at the glitzy event at the Mayfair hotel, where they were joined by an array of stars 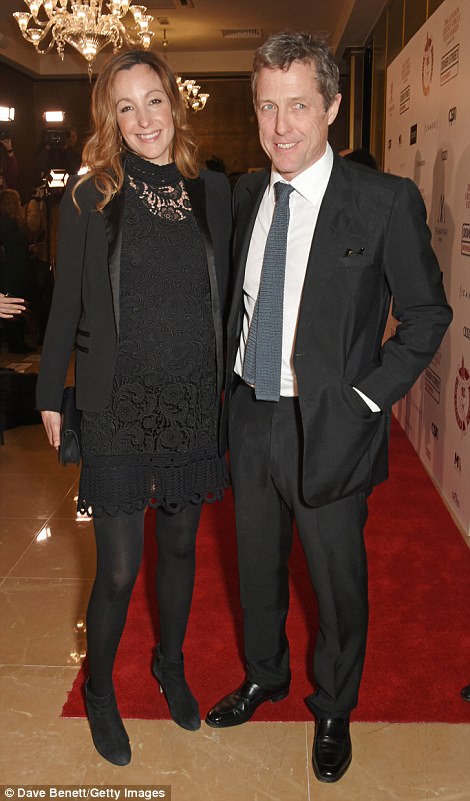 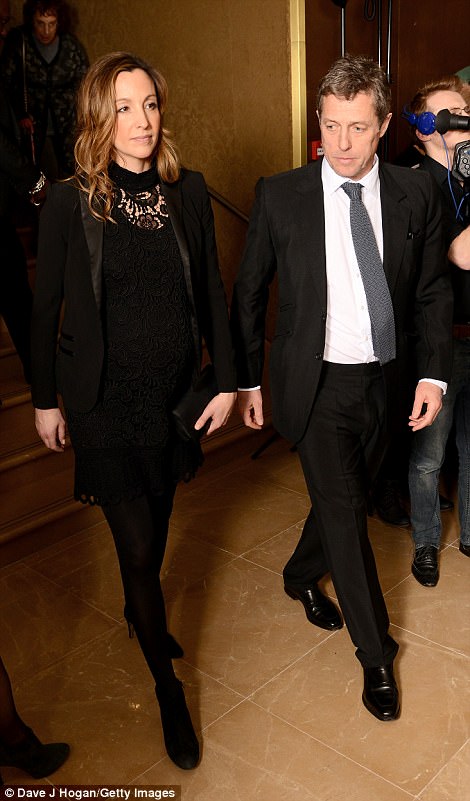 Father-of-five? He is already a proud father to four children by two women, and is now at the centre of rumours that his girlfriend is expecting their third child 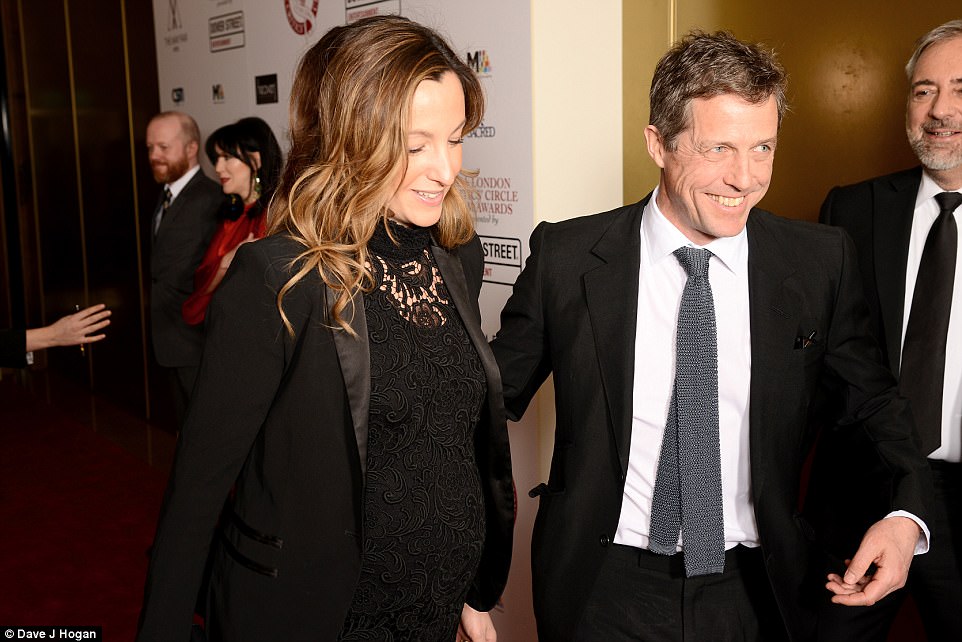 Sizzling: He grinned as he placed his arm lovingly around girlfriend Anna, who cut a chic figure in a black lace LBD, teaming it with tights and ankle boots

Turning up the glamour! Florence Pugh (left) cut a stylish figure in a Gothic-inspired floor-length gown as she joined the party, while Emma Willis (right) slipped into a feathered strappy dress 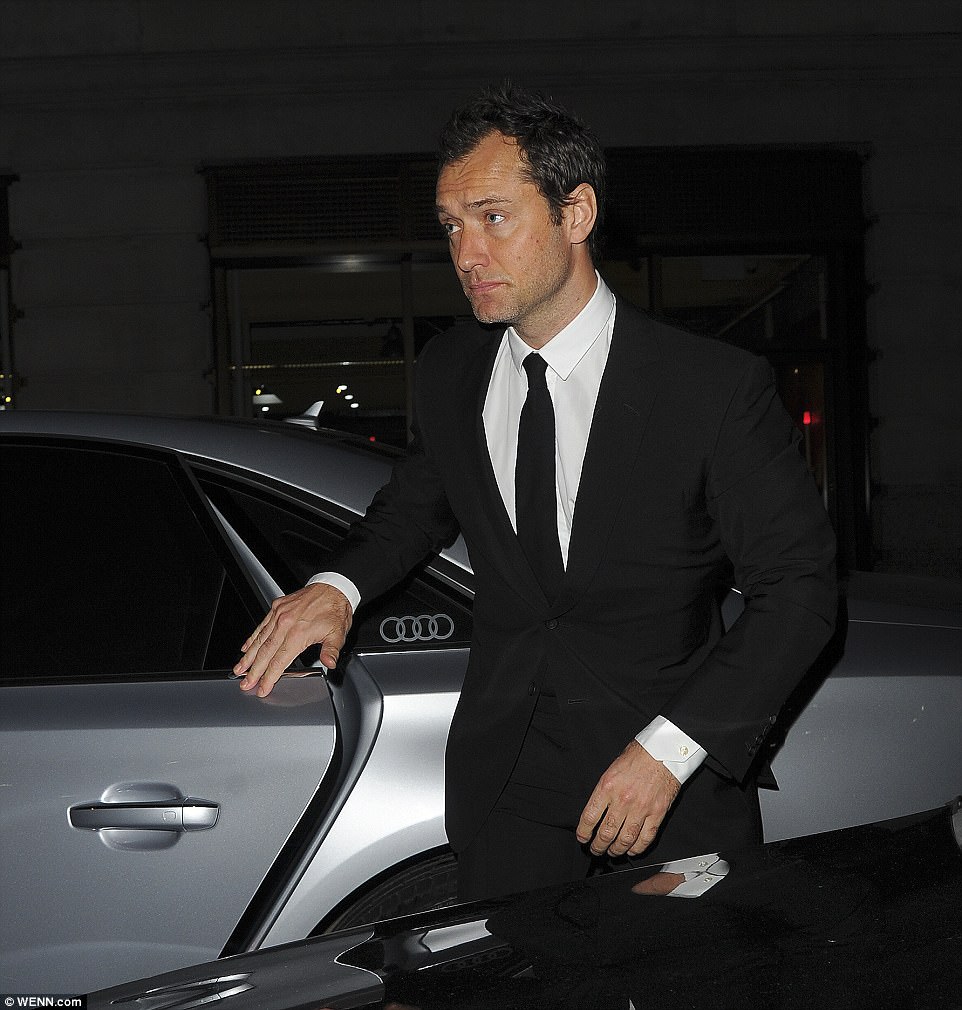 Dapper: Back at the event Hugh Grant was joined by handsome actor Jude Law, who put on a suave appearance in a crisp white shirt and well-cut suit 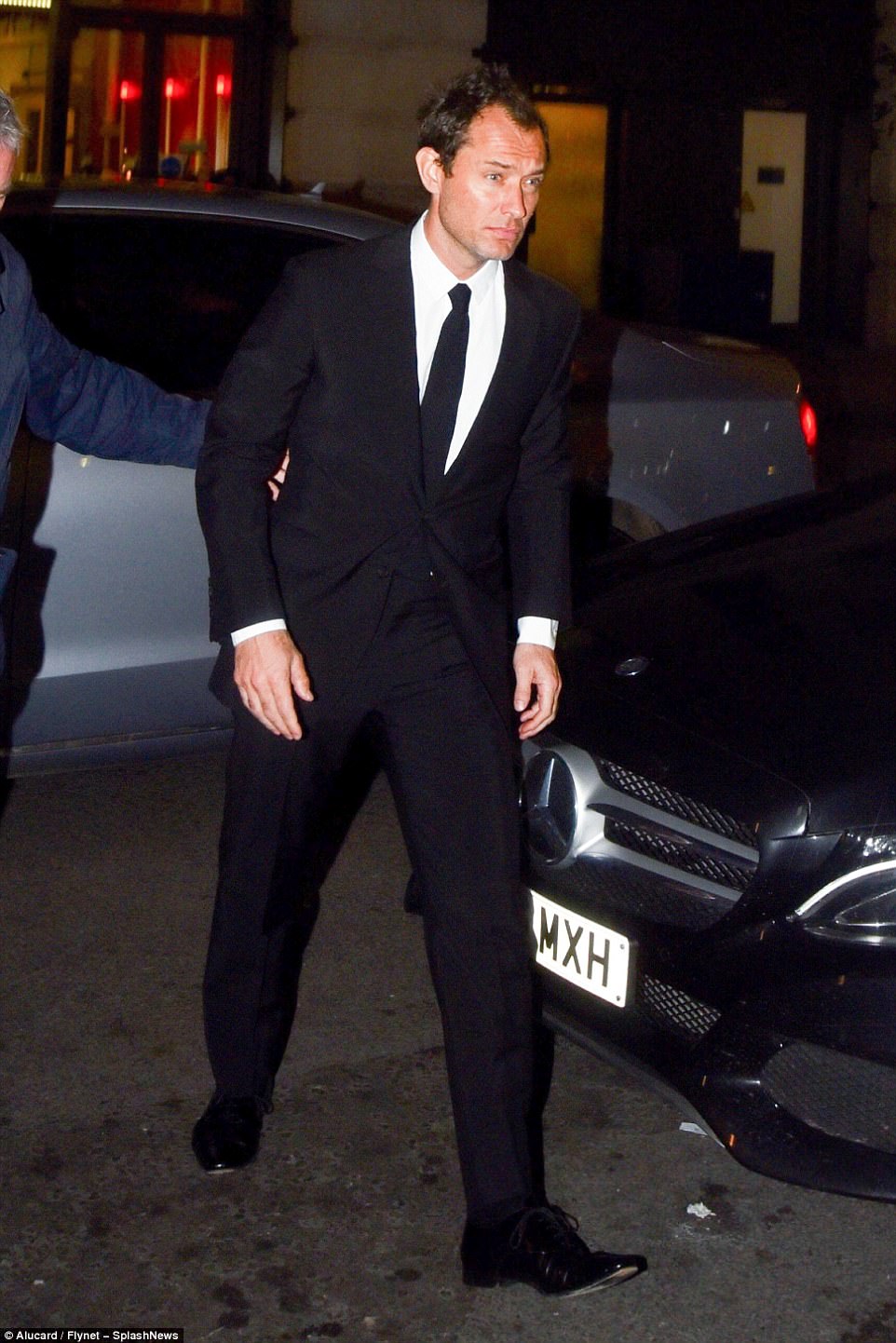 Stylishly late: Jude completed his look with a black tie and shiny shoes as he made his way into the event

The Love Actually star said his favourite trick to entertain his four children is to put his underpants on his head and flash his ‘a**e’ to them.

Giving a rare insight into his family life, he added that John performs his entire nativity play to him naked every morning.

Talking about the birth of Tabitha, he admitted: ‘We were all surprised. It’s the nicest thing that’s ever happened to me, it sounds cliched but it happens to be true.’

He said: ‘You cant help it. It’s lovely to have all that love around. Suddenly you love someone more than yourself – it’s unheard of in my case – and they love you. It’s enchanting.’ 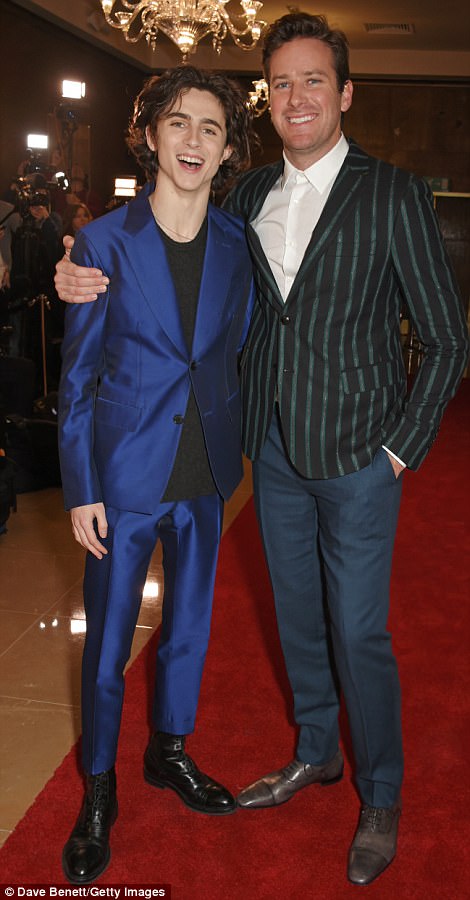 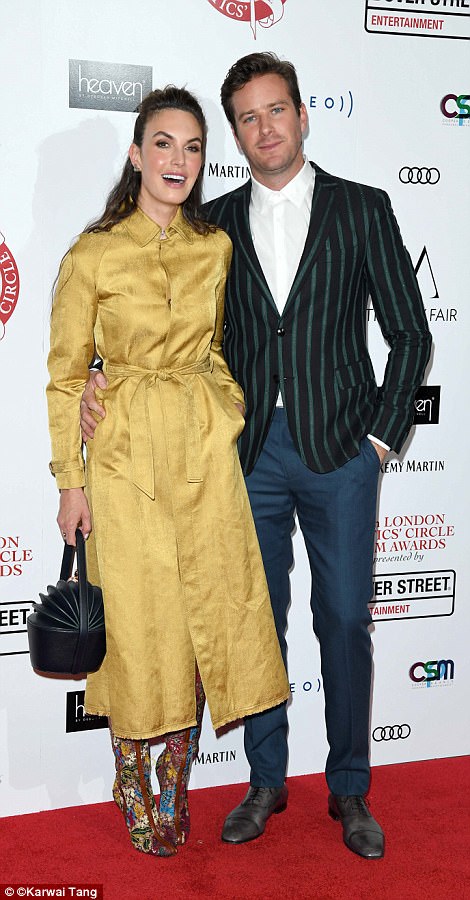 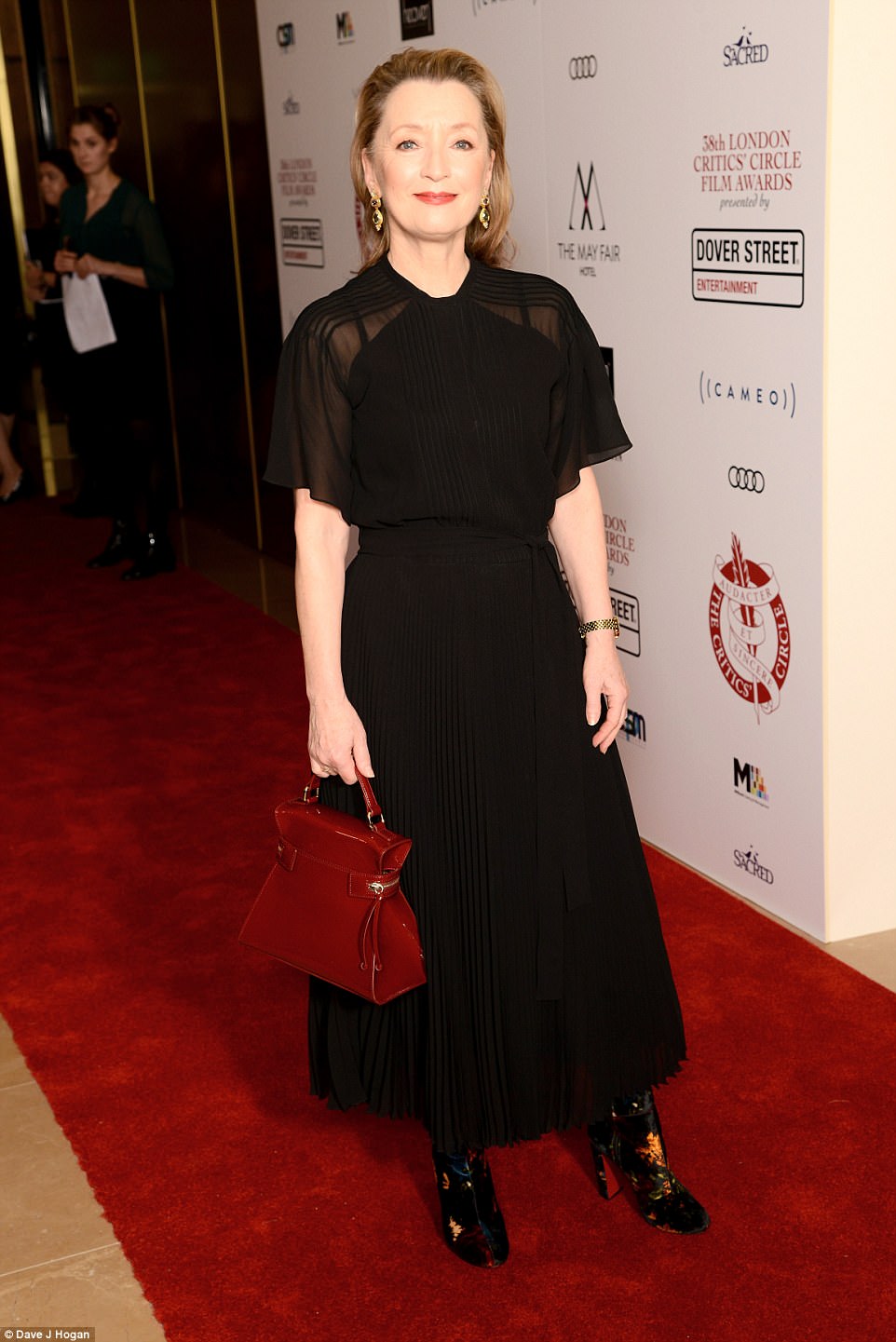 Asked about his relationship with the mothers of his children, he remained tight-lipped, replying simply: ‘Good. It’s all nice.’

The two women were pregnant at the same time for five months in 2014, and at the time even both lived within walking distance of the actor’s Fulham townhouse.

Meanwhile back at the event Hugh Grant was joined by handsome actor Jude Law, who put on a suave appearance in a crisp white shirt and well-cut suit.

Also joining the pool of talent was Lady Macbeth actress Florence Pugh, who cut a stylish figure in a Gothic-inspired floor-length gown.

The semi-transparent frock teased a glimpse of her strappy camisole dress underneath, and she completed the look with a velvet belt and clutch, accentuating her fiery hair with a bold red lip.

All that glitters! Joining the flame-haired ladies was Emily Beecham, who stood out in a plunging gold suit ensemble embellished with an orange bow 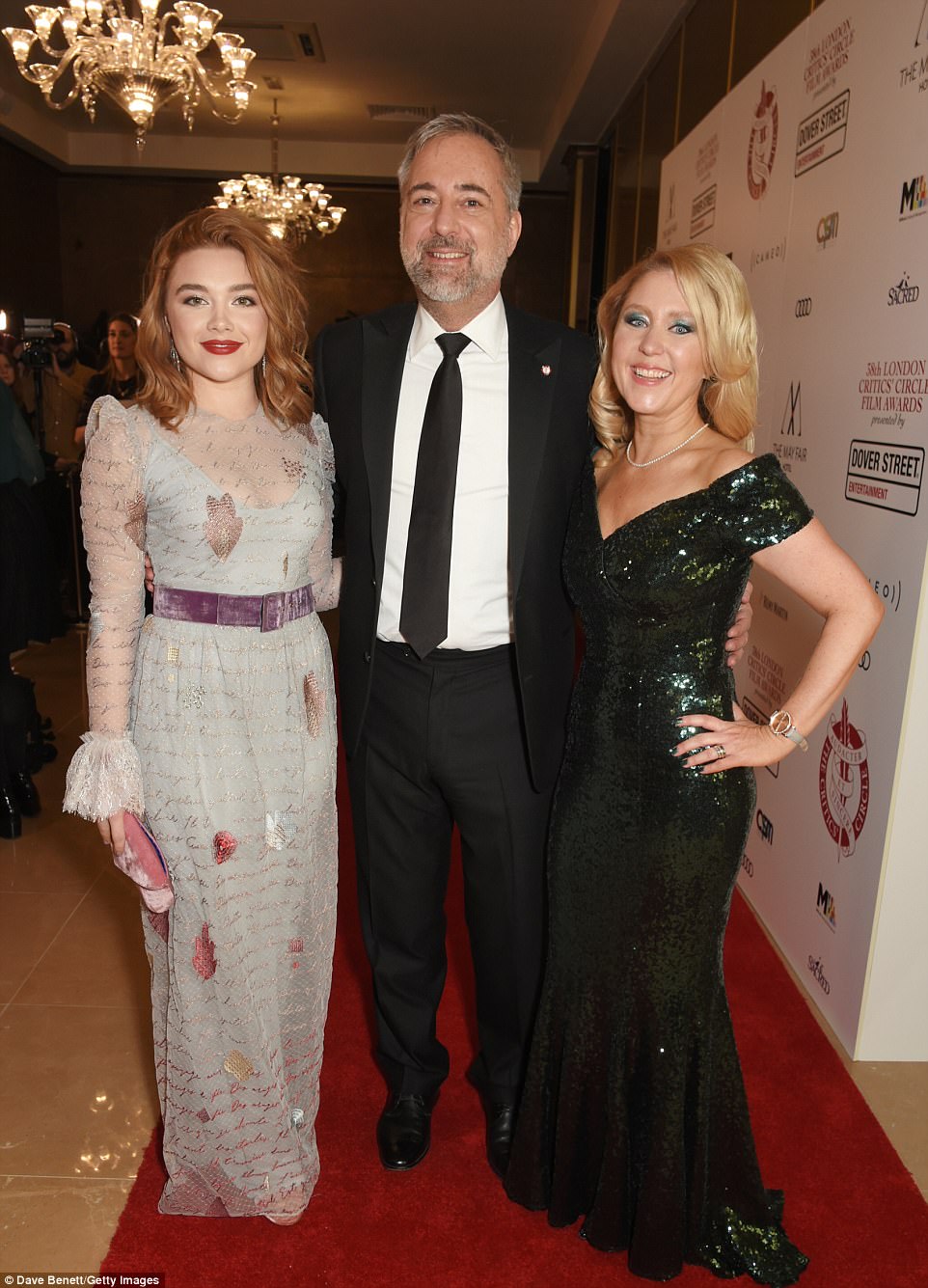 At the beginning of the month the 22-year-old, who stars in the British crime series Marcella and appeared in 2016’s Lady Macbeth, was nominated for the 2018 EE Bafta Rising Star award.

Reflecting on her nomination, Florence revealed: ‘The journey to get to this rewarding moment has been exhilarating, and so to feel recognition for doing something I love and the hard work many have put in feels very touching.’

Joining the flame-haired ladies was Emily Beecham, who stood out in a plunging gold suit ensemble embellished with an orange bow.

Accessorising with a pair of strappy sandals, the English-American Hail! Caesar actress posed up a storm for cameras.

They were joined by a whole host of stars at the coveted awards ceremony. 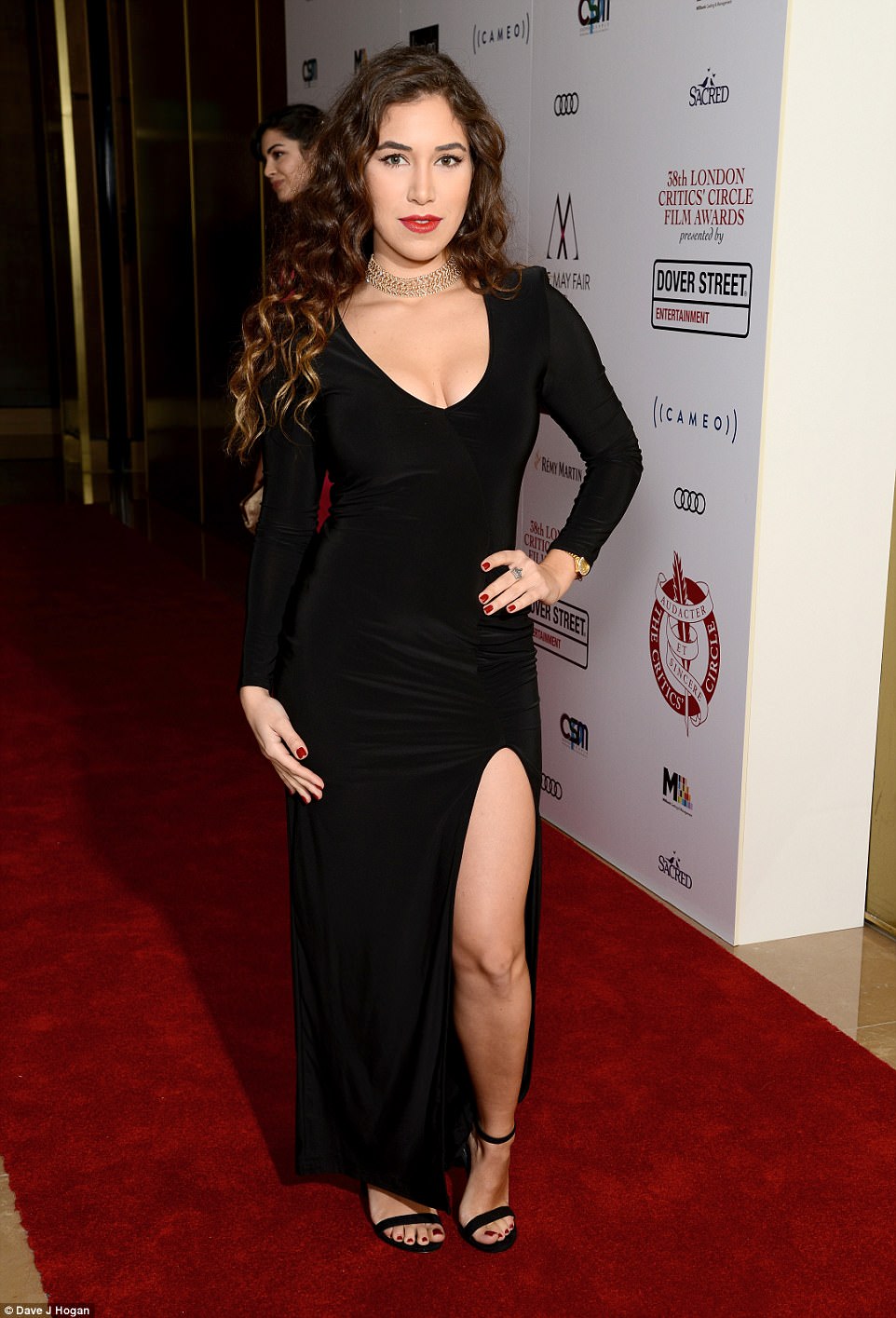 Leggy lady! Yasmine Alice put on a sizzling display in a plunging black dress slashed high on the thigh 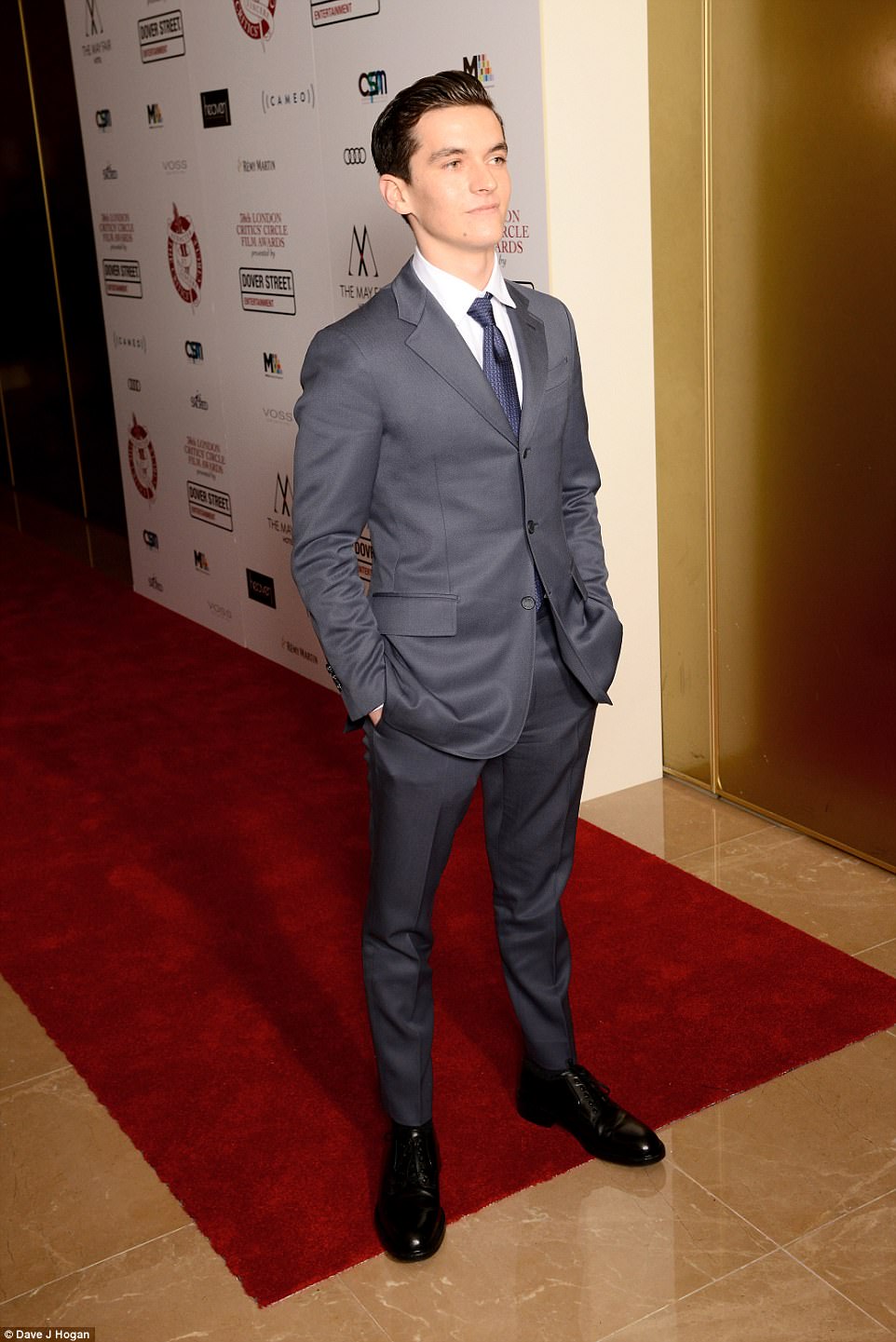 SCREENWRITER OF THE YEAR

ACTRESS OF THE YEAR

ACTOR OF THE YEAR

Timothée Chalamet – Call Me By Your Name

SUPPORTING ACTRESS OF THE YEAR

SUPPORTING ACTOR OF THE YEAR

BRITISH/IRISH ACTRESS OF THE YEAR

Sally Hawkins – The Shape of Water/Maudie/Paddington 2

BRITISH/IRISH ACTOR OF THE YEAR

Daniel Kaluuya – Get Out

YOUNG BRITISH/IRISH PERFORMER OF THE YEAR

FILM OF THE YEAR

FOREIGN-LANGUAGE FILM OF THE YEAR

DOCUMENTARY OF THE YEAR

I Am Not Your Negro

BRITISH/IRISH FILM OF THE YEAR: The Attenborough Award

DIRECTOR OF THE YEAR

BRITISH/IRISH SHORT FILM OF THE YEAR