She was appearing on a festive edition of Live With Kelly And Ryan, to take part in their Christmas sweater competition.

And Kate Winslet was the clear-cut winner on Thursday, as she made her arrival in an elaborate number, putting hosts Kelly Ripa and Ryan Seacrest’s efforts to shame.

The 42-year-old actress joined the festive fun, entering the New York City-based studio with her arms raised in the victory sign.

‘THAT’S why she’s an Academy Award winner!’ Kate Winslet puts Kelly Ripa and Ryan Seacrest to shame as she appears on their show in a VERY festive Christmas sweater

‘I win, I win, I win,’ she said while delivering high-fives to a gauntlet of audience members.

The Oscar-winning actress hugged hosts Kelly, 46, and Ryan, 42, in her unique sweater that featured tinsel, snowmen, ribbons, baubles and stockings.

‘It is about the commitment, I feel. I like to consider myself as a committed woman, in all things, including Christmas sweaters,’ said Kate who bought the sweater on Etsy. 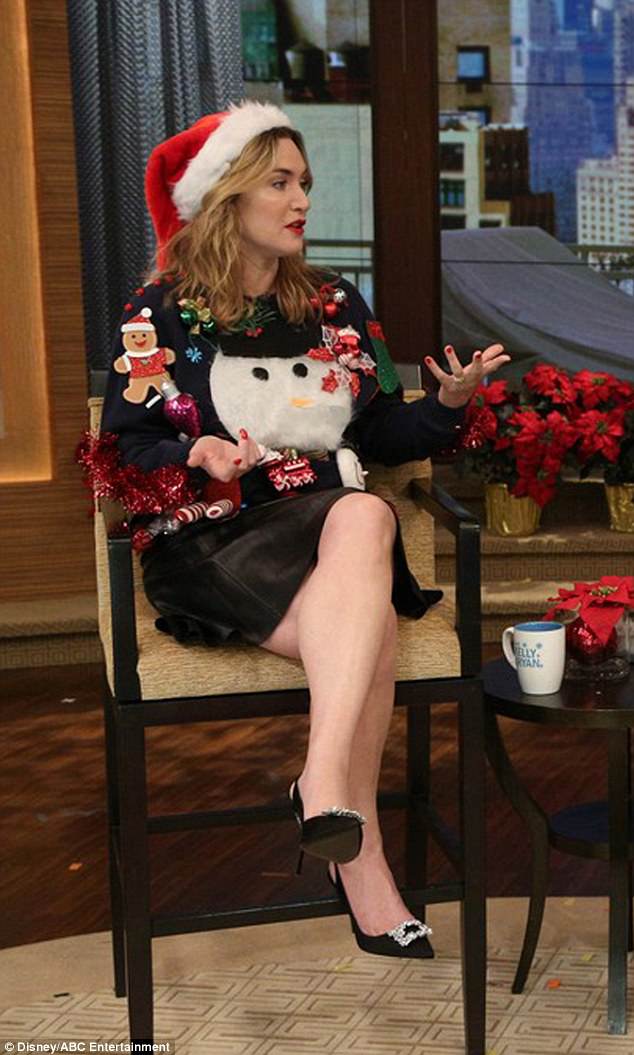 Winning look: Kate Winslet was the clear-cut winner on Thursday, as she made her arrival in an elaborate number, putting hosts Kelly Ripa and Ryan Seacrest’s efforts to shame 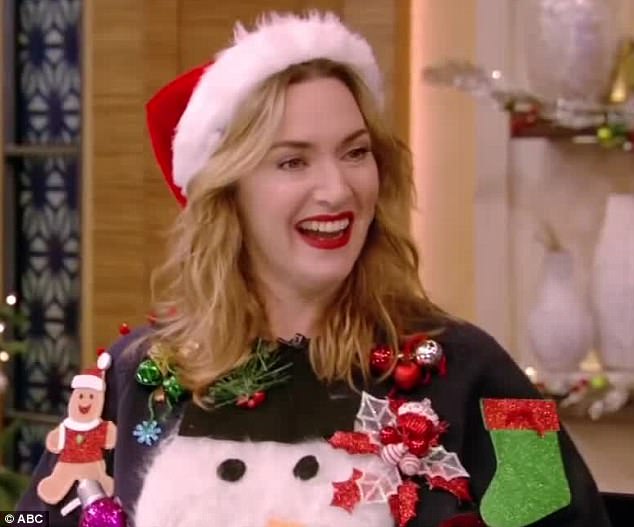 Sweater party: Kate Winslet took part in the holiday sweater party on Thursday during her appearance on Live With Kelly And Ryan 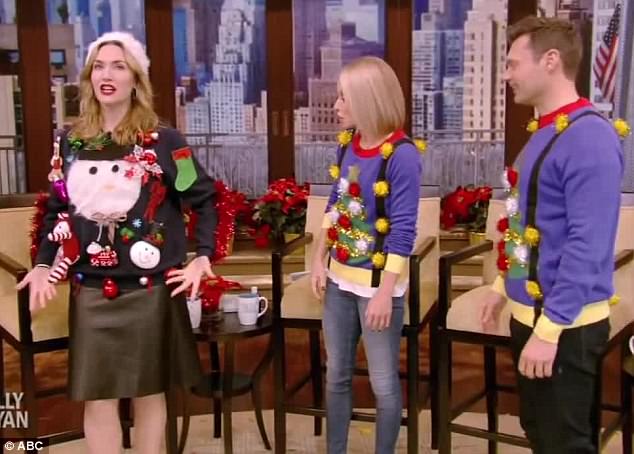 Kelly admitted that Kate had stolen the show by a mile.

‘We were so proud of ourselves and then you walked out and it was like ”That’s why she’s an Academy Award winner”,’ Kelly said.

She completed the look with a Santa Claus hat and bright red lipstick. 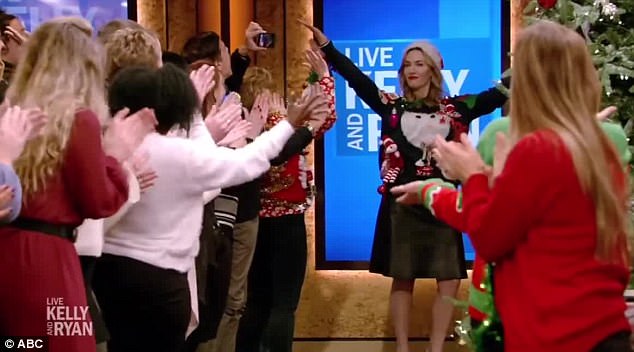 Arms raised: Kate stepped out with her arms raised and declaring victory 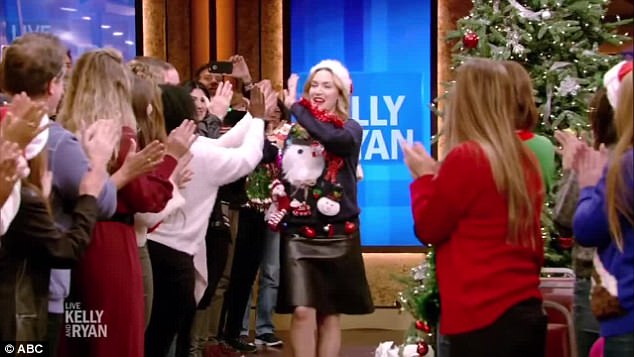 High fives: The actress gave high-fives while walking a gauntlet of audience members 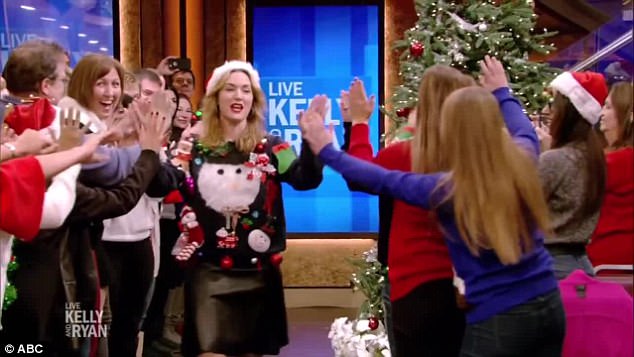 Feeling confident: Kate kept saying that she won as she made her way to the hosts 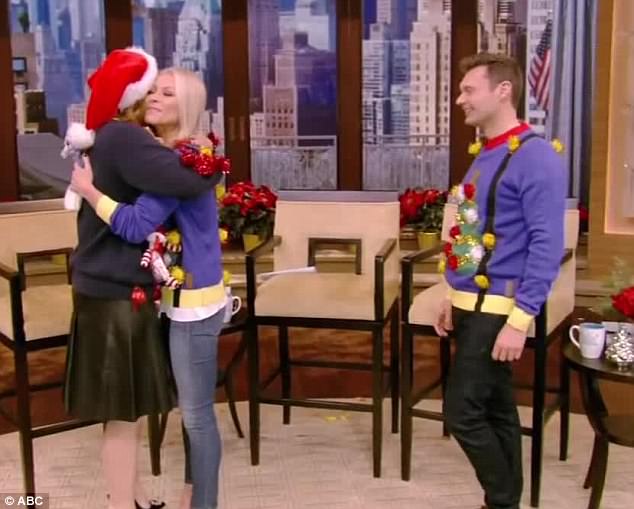 Kelly and Ryan sported matching blue and yellow tops, with Christmas trees on the front.

Kate also revealed that she and her sisters recently made a Christmas pudding.

The Titanic star said the family tradition includes letting all the children stir the pudding while making a wish.

The actress can be seen in the new Woody Allen movie Wonder Wheel – released earlier this month. 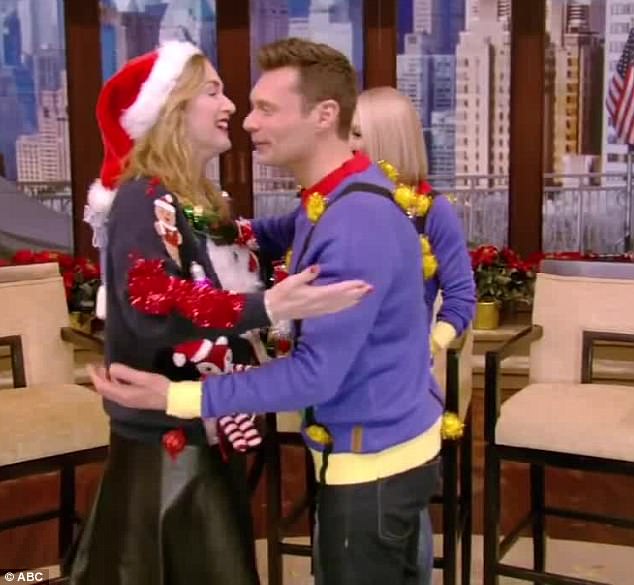 Holiday fun: Ryan also got a hug from Kate 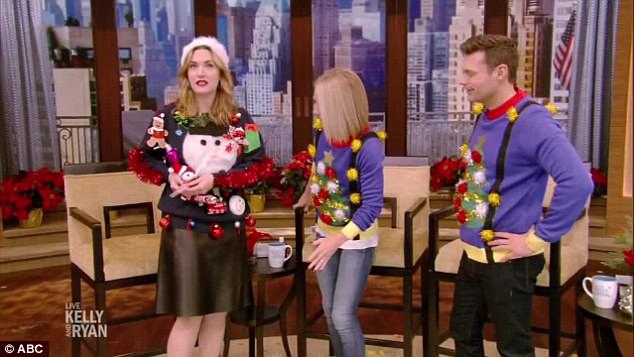 Online find: Kate revealed that she  bought the sweater on Etsy 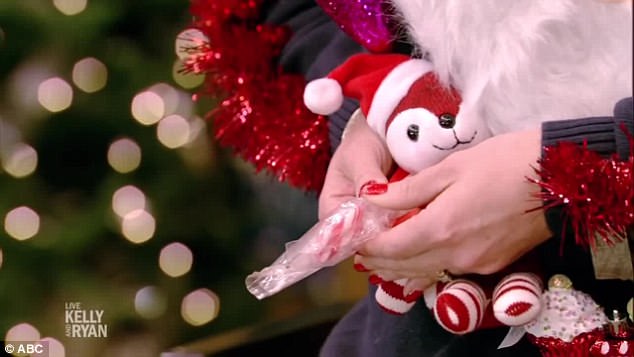 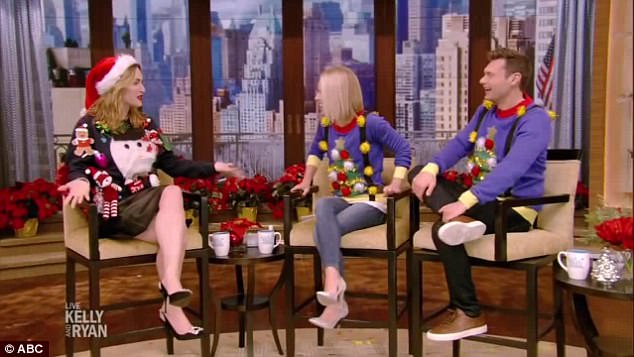