Kate Wright defends herself and Rio Ferdinand from online troll

Kate Wright has fired back at an online troll who insinuated that the couple have a lavish lifestyle.

The former TOWIE star, 27, is currently on a family vacation in the Maldives with fiancé Rio Ferdinand, 40, and his three children.

The couple have been sharing photos of their holiday on Instagram and one user brought up the couple’s wealth in a now deleted comment, with Kate quickly hitting back.

Furious: Kate Wright, 27, and Rio Ferdinand, 40, have been sharing photos of their holiday on Instagram and one user brought up the couple’s wealth in a now deleted comment, with Kate quickly firing back

She wrote: ‘Money doesn’t make looking after 3 children that have lost their mum easier.

‘Yes we can have nice holidays but money can’t bring back loved ones and heal grief.

‘Looking after children and caring for them comes from the heart not the bank.’

Kate started dating Rio in early 2017, two years after he tragically lost his wife and the mother of his children, Rebecca Ellison, 34, following a short battle with cancer. 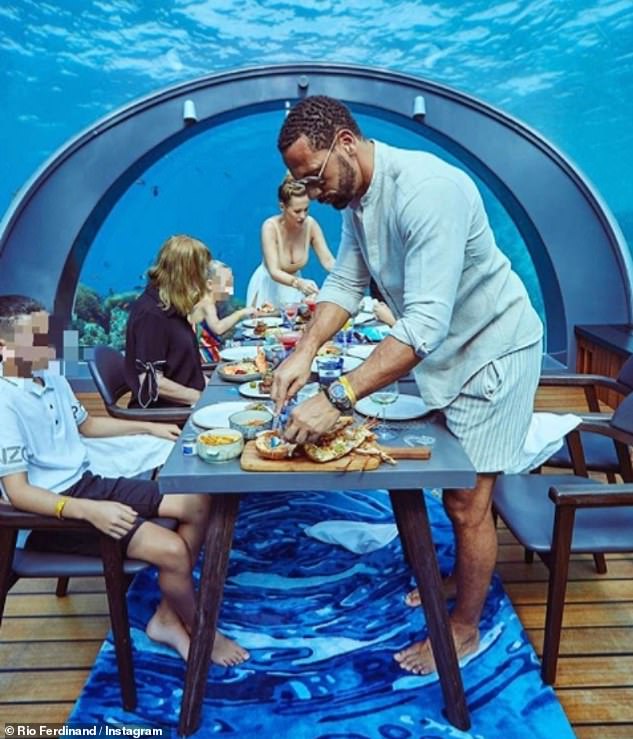 Snap: Kate responded to a troll in a now deleted comment on this photo of the family dining out in lavish underwater restaurant

Defending their trip: She wrote, ‘Money doesn’t make looking after 3 children that have lost their mum easier’

The photo in question that drew the ire of the troll was one Rio shared to his Instagram account of the family dining out at an undersea restaurant with glass walls and ceilings.

Others also jumped to Kate’s defense, with one user responding to her comment by saying: ‘Well said.

‘You have made those kids happy. Be proud of what you both achieved…such hard time for anyone who has lost their mum or dad.’

Rio revealed last year that Rebecca had encouraged him to find love again once she passed, in a conversation with her friend Lisa. 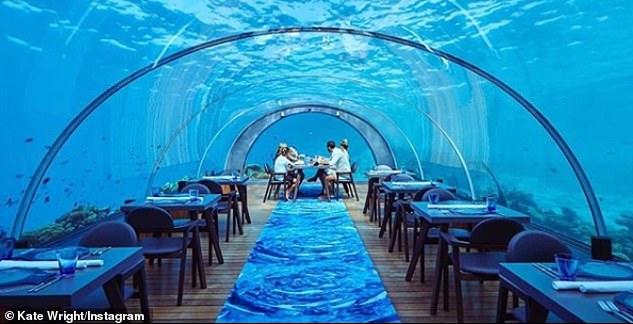 Loss: Kate started dating Rio in early 2017, two years after he tragically lost his wife and the mother of his children, Rebecca Ellison, 34, following a short battle with cancer 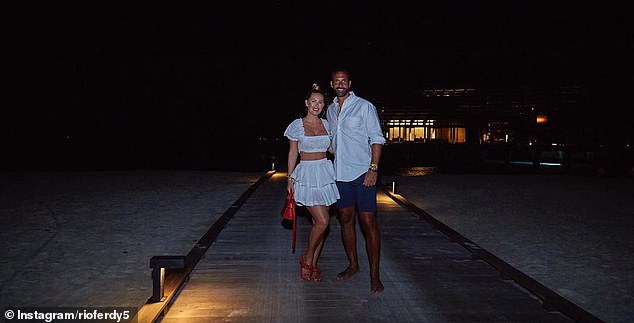 Relationship: Rio has previously admitted that he and Kate spoke about marriage regularly, but insisted they were in no rush to tie the knot. He said: ‘We do talk about it, but I’m not going to sit here and give you a date’ 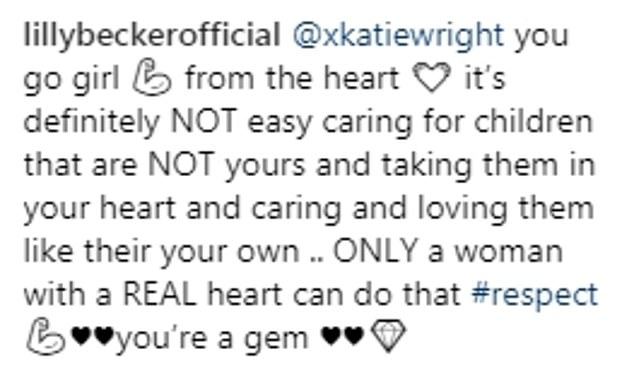 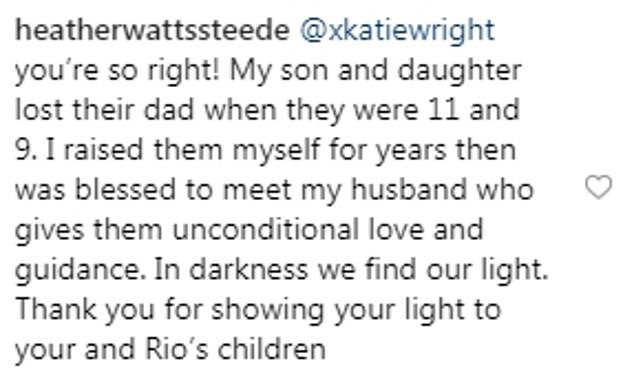 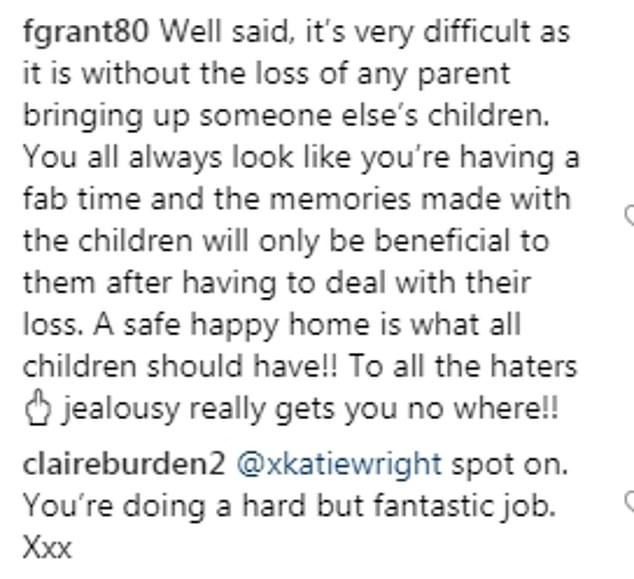 Support: Other users also jumped to Kate’s defense and commended her response to the troll

He told The Sun: ‘Rebecca told Lisa something in the final weeks of her life. Months later Lisa told me what it was… “It kills me to think of Rio with a new partner, Lisa, you know it does. Of course it does.

‘But you know what kills me even more? Thinking of him alone and lonely. If I don’t make it, Lisa, I don’t want Rio to be miserable. I want him to be happy.'”

Rio has previously admitted that he and Kate spoke about marriage regularly, but insisted they were in no rush to tie the knot. He said: ‘We do talk about it, but I’m not going to sit here and give you a date.’

The football pundit also spoke about the positive impact Kate has had on his children since the tragic passing of their mother.

Rio explained: ‘My relationship with Kate has helped in that they have got a female in the house now.’ 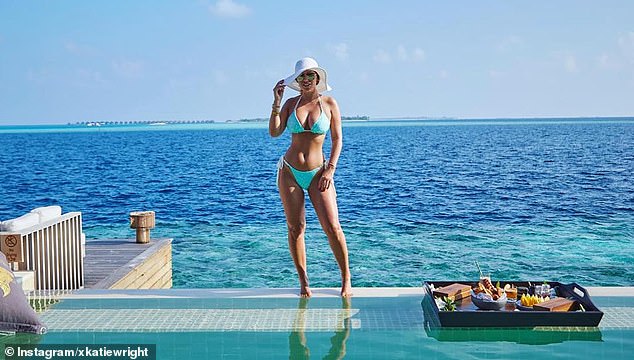 Family: Speaking of his children, Rio said, ‘My relationship with Kate has helped in that they have got a female in the house now’

Rio proposed to Kate in front of his three children in November in a romantic gesture while the family where on holiday to Abu Dhabi.

Taking to her Instagram account at the time to share the happy news with her followers on Thursday morning, Kate wrote: ‘The perfect end to our holiday … How could the answer not be yes.’

The former England star proudly revealed he had included his kids in his proposal plans, and praised them for keeping the secret for so long. 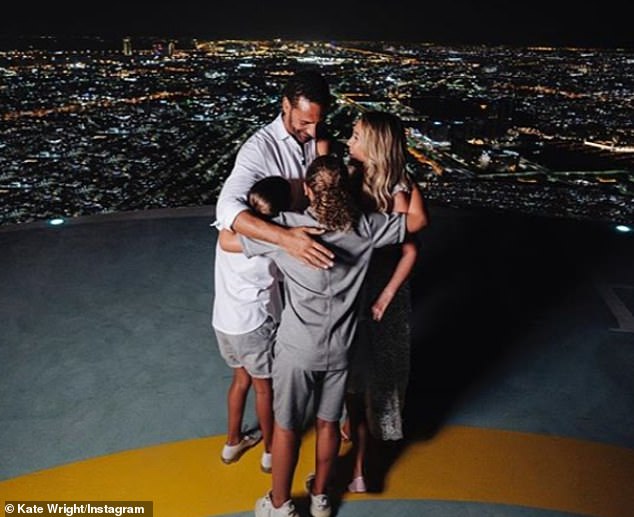 Surprise! Kate Wright and Rio Ferdinand are engaged after almost two years of dating, sharing the happy news with their fans on Thursday 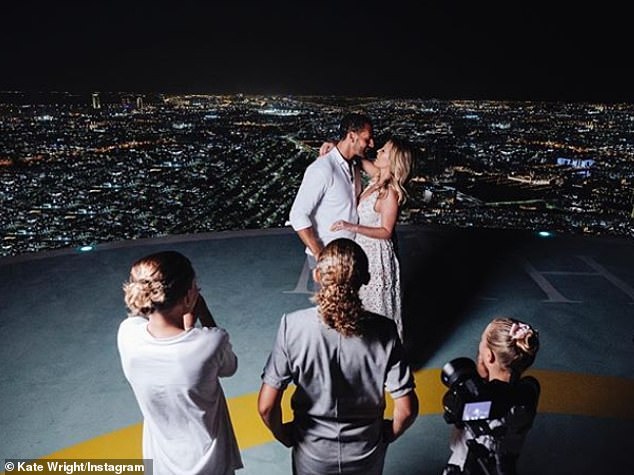 Romantic: The former TOWIE star accepted a proposal from the sports legend during a family holiday to Abu Dhabi – in front of his children Lorenz, 12, Tate, 10, and Tia, seven

Posting a sweet snap of the trio watching the special moment, he wrote: ‘She said yes. How these 3 kids kept it a secret I’ll never know.’

The former TOWIE star has spoken out about her close relationship with the children, revealing they are keen for her to have a baby so they have another sibling to play with.

Speaking in an interview with the Daily Mail’s YOU magazine earlier this year, Kate said: ‘The kids would like a little brother or sister; they say, ‘I dreamt that you were pregnant’. But right now we’re just happy with our little unit.’ 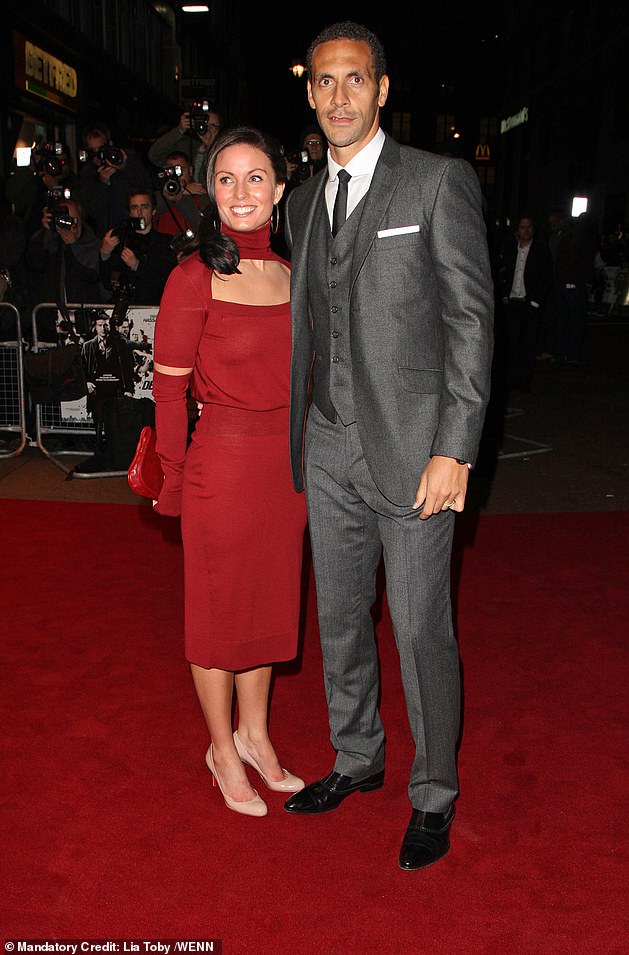 Kate also explained that she saw the ex footballer and his brood as a package and ‘fell in love with them’ as soon as she met the trio.

‘I knew it would be a challenge, but if you love someone you go with it and deal with the difficult stuff.’

Despite of her close relationship with Rio’s children, Kate has said their late mother is ‘irreplaceable’ and she works hard to keep Rebecca’s memory alive.

Speaking during an appearance on This Morning in May, she said: ‘You only have one mum, their mum is irreplaceable.

‘There’s a special room in the house, for their [late] mum and their nan – they might do homework there for example.

‘We always celebrate Rebecca’s birthday, we all go to cemetery together. We do talk about their mum, I know a lot more about her than they think.’ 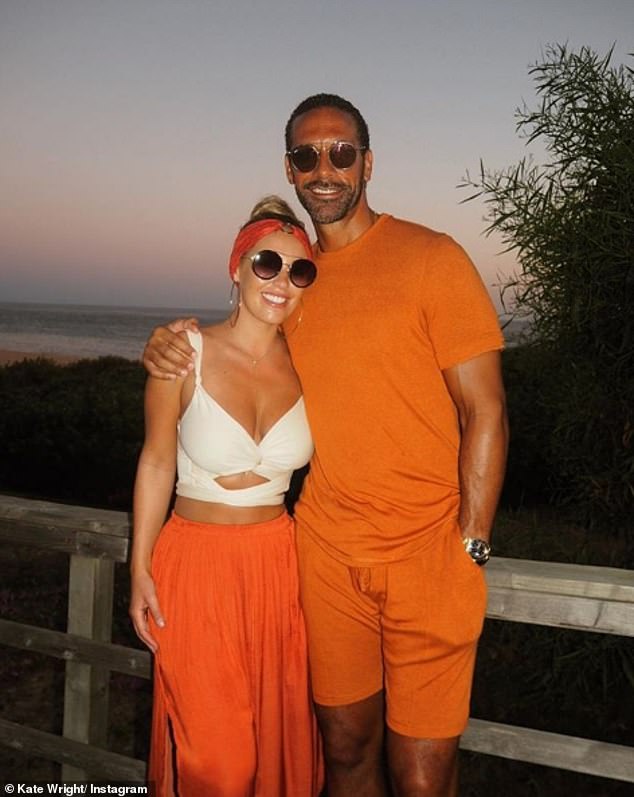 Wedding bells: Rio has previously admitted the couple speak about marriage regularly, but insisted they were in no rush to tie the knot

The star quit The Only Way Is Essex in April 2017 in a bid to focus on her life with Rio and his children, but although people might not understand her decision, she says it was a no-brainer.

Kate explained: ‘Everyone thinks I’m crazy, even my mum was like, ‘You’re mad!’ But I had two choices. I was in this world of drama and in the public eye.

‘Then I met Rio, he had children who lost their mum, they didn’t have a woman in their lives. Someone needs to be at home and give them love.’

The former reality star confessed the hardest thing has been learning how to discipline three young children and gain their respect and trust. 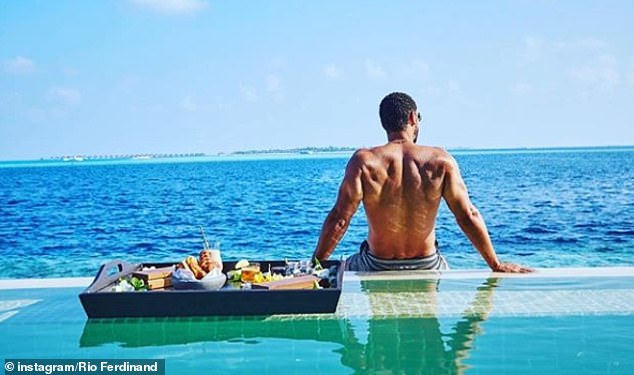 Hunky: Rio, 40, showed off his muscular shoulders as he stared out to sea, with a lavish breakfast tray behind him during their trip to the Maldives

Rio has been candid about the difficulty of becoming a single parent following the tragic death of his wife Rebecca Ellison.

Rio met Rebecca, a former fitness trainer and accountant, while he was at West Ham United in the late 1990s. The pair married in the Caribbean in 2009. 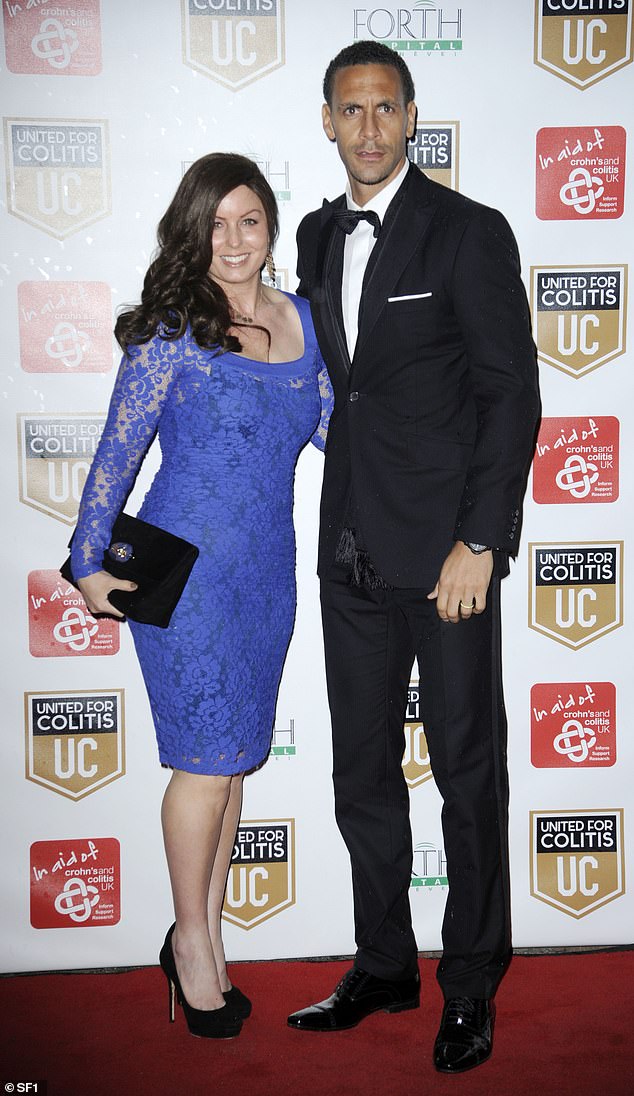 Difficult time: He opened up about his loss in a BBC documentary – Rio Ferdinand: Being Mum and Dad, in which he explored ways of managing grief following Rebecca’s sad death

But a scan earlier in 2015 revealed it had returned and spread to her bones and she died just five weeks later on May 1.

The BT Sport pundit opened up about his loss in a BBC documentary – Rio Ferdinand: Being Mum and Dad, in which he explored ways of managing grief.

The programme won the Single Documentary Award at the TV BAFTAs 2018.

He broke down in tears as he picked up the award last year, saying: ‘I didn’t do this for any other reason other than my three kids. The worst thing to come out of this is that I get quite emotional now.

‘I’m not quite used to it. This documentary has given something to my three kids. 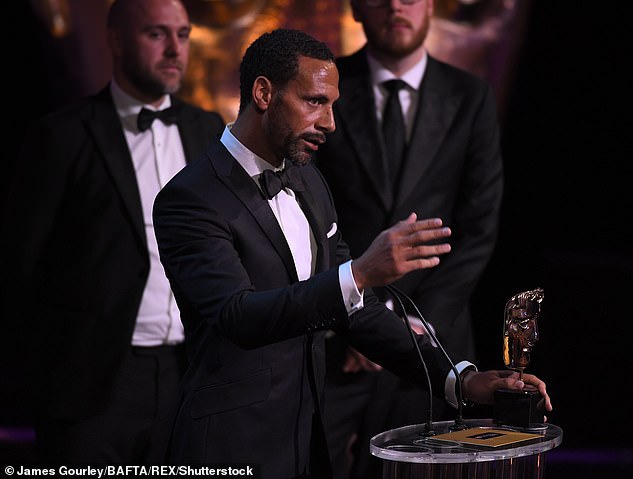 Moving: The programme won the Single Documentary Award at the TV BAFTAs 2018 and Rio broke down in tears as he picked up the trophy

‘This documentary has propelled me forward into a period of happiness where my kids are happy I’ve got a beautiful girlfriend. Thank you, BBC, thank you very much.’

He earned the respect of the nation with his frank discussion of life as a widower in the documentary.

‘This is one of the only things in life that we’re going to go through together, where I haven’t got the answers for them, and that’s quite a worrying, daunting thing’, he said in the programme.

‘When they don’t speak, it’s difficult sometimes, you’re just sitting there going like ‘what are they thinking? Where are they? Are they worried, are they happy, are they sad?”

Rio added that while he is ‘desperate to know’ what his children are thinking, he doesn’t ‘want to scare them.’

Ferdinand was still playing professional football for Queens Park Rangers when Rebecca lost her battle with breast cancer, but retired the same month without playing a further match.

‘I don’t think I’ve grieved properly,’ the star said in the documentary. ‘I’ve not given myself that time to sit down and really flush everything out and go through it. 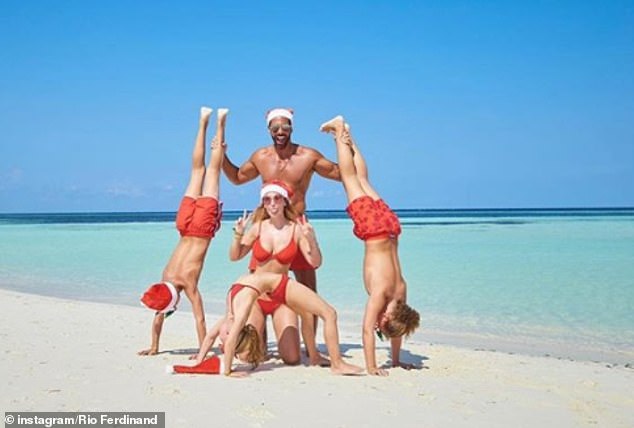 Cute: Rio and his fiancée Kate have headed overseas with his three children to spend Christmas in the Maldives

‘As footballers, we often talk about missing important games through injury as if it was the end of the world.

‘Believe me, it isn’t when compared to your wife and mother of your children dying of cancer at the age of 34.’

In a previous interview with The Sun, he admitted his wife’s battle was a private one, as she opted to stay out of the limelight for the sake of her family.

‘Rebecca was an incredibly brave woman and a very private person who didn’t want anything about her illness to appear in the media while she was fighting for her life,’ Rio noted. ‘Only a close-knit group of family and friends knew. 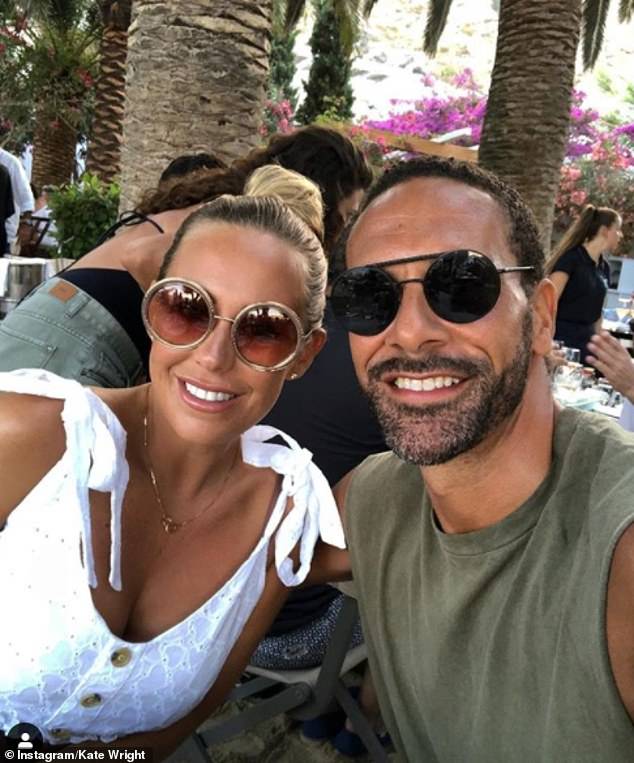 Touching: Rio revealed last year that Rebecca had encouraged him to find love again once she passed in a conversation with her friend