Kate’s appearance on the steps of St Mary’s Hospital as she and William proudly showed off Prince Louis of Cambridge to the world has already been the subject of much debate.

But now the conversation has taken an unlikely turn from the Duchess’ ultra-coiffed appearance hours after giving birth, to how much her red maternity smock resembles the dress worn by Mia Farrow in the 1968 horror film Rosemary’s Baby.

Comparison photos began circulating on Twitter after eagle-eyed royal watchers pointed out that the similarities between the two dresses, which are the same colour and feature the same white lacy Peter Pan collar.

But while Kate’s Jenny Packham frock was chosen for the happy occasion of bringing home her third bundle of joy, Mia’s had far less pleasant associations for her character, Rosemary Woodhouse, a young housewife who learns her own baby is the son of the devil.

The comparison prompted one Twitter user to joke: ‘Not too sure about this Rosemary’s Baby remake tbh.’ 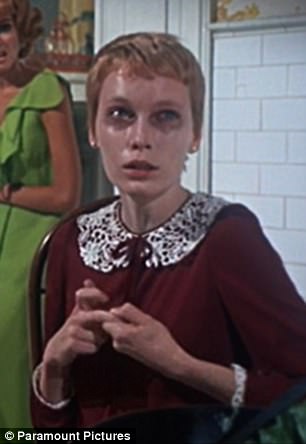 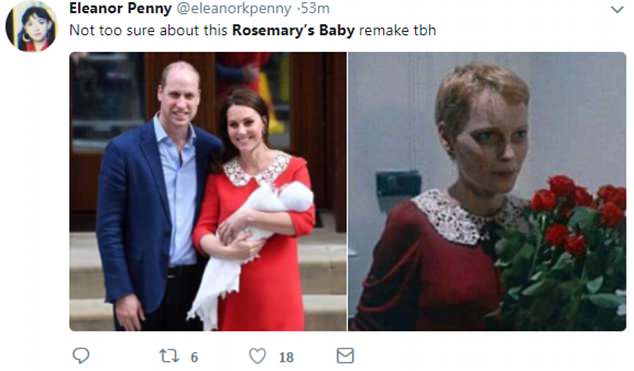 Not convinced: Mia Farrow starred in the creepy 1968 horror film, in which a young woman comes to believe that her baby is possessed

When Chris Wilson, posting under the handle @crismoviecorner, shared the side by side photos online he said: ‘Kate Middleton rocking the same dress as Rosemary from Rosemary’s Baby is definitely not discomforting at all.’

And his tweet has been liked and shared hundreds of times by people equally startled by the similarities between the two frocks.

The ensemble Kate was wearing as she emerged from the Lindo Wing on Monday had already sparked a furious debate, as fellow mothers began sharing their own – markedly different – post-partum snaps online.

Everyone from former Blue Peter presenter Katy Hill to Kirstie Allsopp weighed in on the question of whether the sight of the Duchess in her signature nude tights and heels – not to mention a full face of make-up and a glossy blow dry – placed additional pressure on new mums. 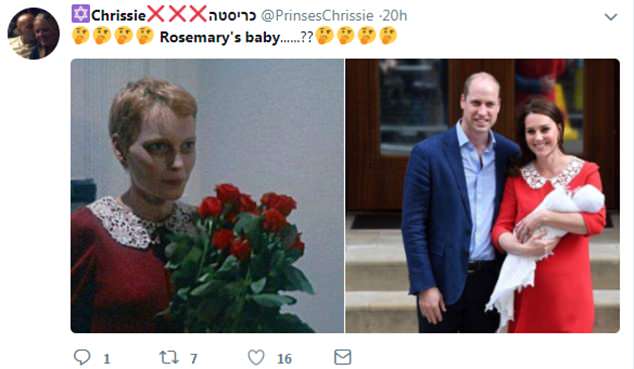 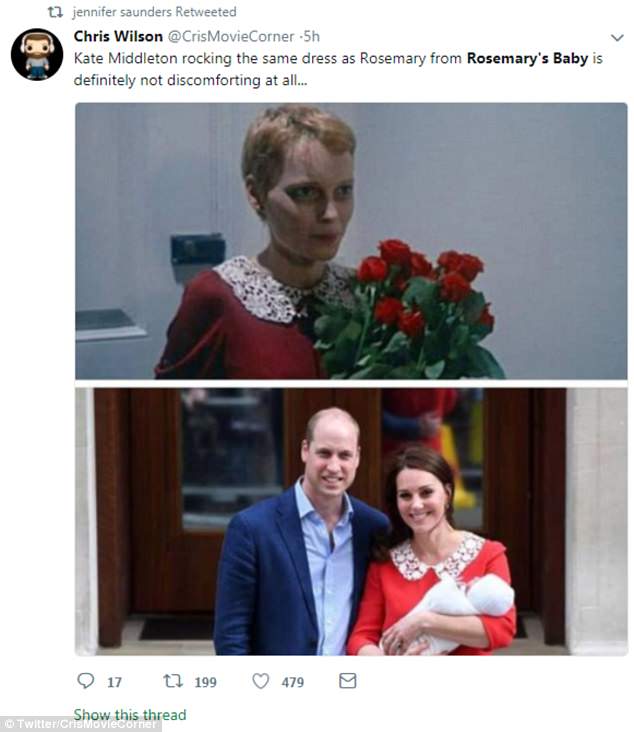 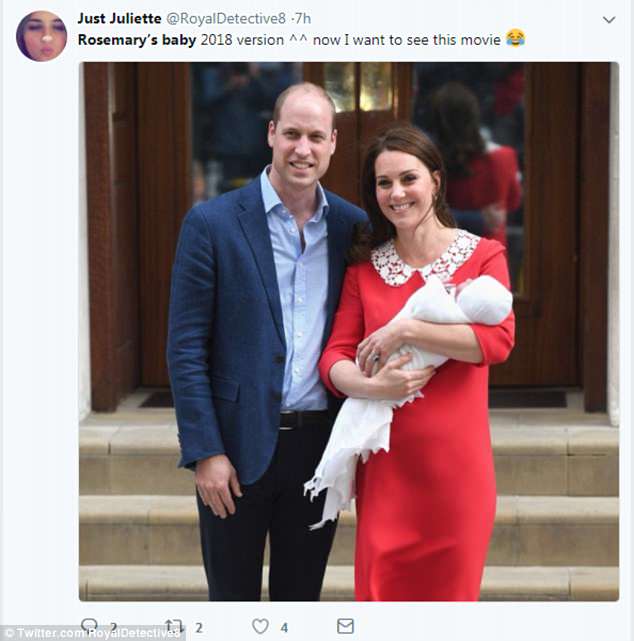 ‘Now I want to see this movie’: The Roman Polanski flick may win over a new generation of fans after the comparison started circulating on social media 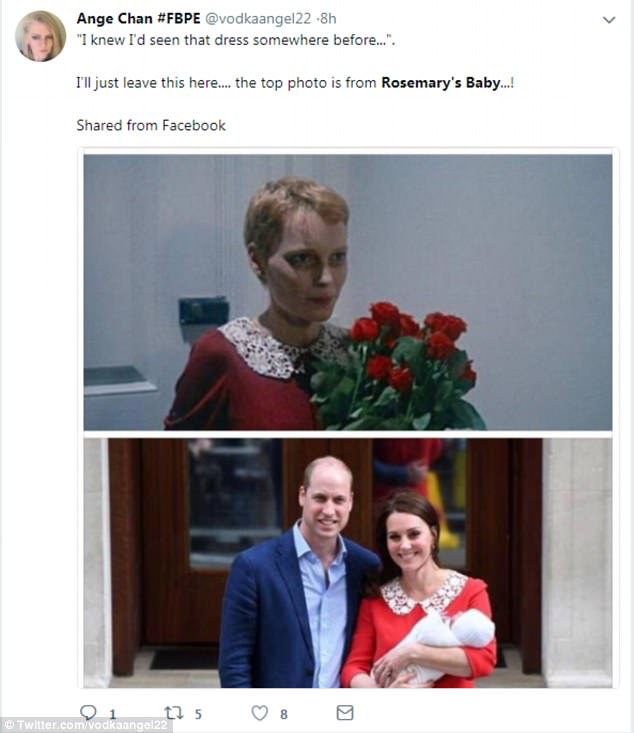 Kate has chosen to wear Jenny Packham each time she presented her three babies to the world.

When Prince George was born in July 2013 the Duchess brought him home wearing a blue and white polka dot frock by the designer – a favourite of her late mother-in-law, Princess Diana.

And in May 2015, when she and William walked out of St Mary’s with Princess Charlotte, Kate was wearing a loose yellow floral Jenny Packham dress. 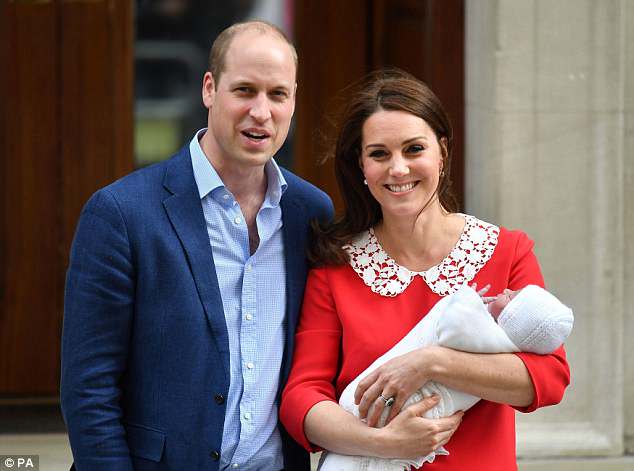 On Friday William and Kate finally announced the name of their newborn son; Prince Louis Arthur Charles of Cambridge

Kate and Wills kept the nation on tenterhooks following the birth on St George’s Day, letting four days go by before finally confirming the name of the new arrival – and fifth in line to the throne – on Friday.

The name serves as a poignant tribute to Prince Charles’ beloved great-uncle, mentor and ‘honorary grandfather’, Lord Mountbatten, who was killed in 1979 when the IRA placed a bomb in his fishing boat.

More than 100,000 bets were placed across the UK betting industry on the baby name, with both Albert and Arthur leading the way as the bookmakers’ favourite.

But William and Kate have plumped for a moniker used for centuries across the Channel by the French, who have had 18 kings called Louis.

Bookies are now quids-in after William and Kate chose the name which had odds of 20/1.