Kathy Griffin says friendship with Anderson Cooper is over

Disgraced comedienne Kathy Griffin has revealed that her friendship with CNN anchor Anderson Cooper is ‘over’ after he publicly condemned her over a controversial photo shoot in which showed a beheaded Donald Trump.

Speaking New York Magazine, Griffin said ‘Our friendship is over,’ as she spoke about Cooper.

Signs that their friendship was on the rocks came after Cooper tweeted his disdain for Griffin’s actions at the time:  ‘For the record, I am appalled by the photo shoot Kathy Griffin took part in. It is clearly disgusting and completely inappropriate,’ he wrote in tweet.

Anderson Cooper said that he wished nothing but good things for former co-host Kathy Griffin but as far as she is concerned, their friendship is now ‘over’ 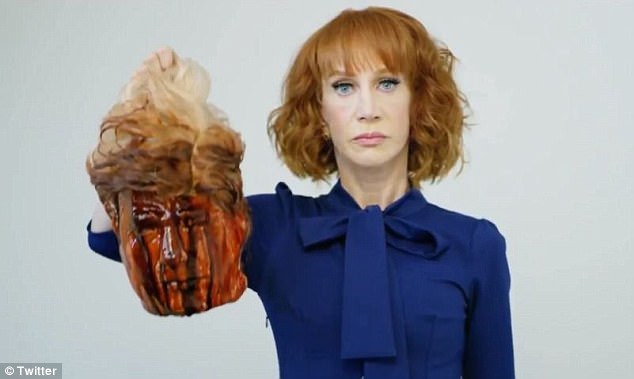 Griffin came under fire after a controversial photo shoot in which she held a severed head designed to resemble President Donald Trump (pictured). The gag backfired on the comedian, who had 15 appearances across the country canceled

Cooper sent out a Tweet saying he was appalled at Griffin’s actions (above), with some fans accusing Cooper of throwing her under the bus

Those words surprised many fans because of the duo’s longtime friendship, with some accusing Cooper of throwing her under the bus.

‘People were assuming I was somehow responsible for this and I just felt I should point out that I actually think this is pretty important as somebody who works overseas and, you know, journalists get beheaded and this is not a joke,’ Cooper said.

According to Griffin, in the following days, four of Cooper’s CNN colleagues reached out repeatedly to offer private support. Cooper, however, didn’t contact Griffin until August 10 .

When Cooper finally reached out to Griffin via text message months later, she told him that their friendship of 17 year was well and truly over after such a betrayal.

New York Magazine reveals that Cooper was ‘shocked and upset by the photo, and while he was not ready to talk to her personally about it, he still considered her to be a friend, and was publicly supportive when asked about the controversy.’ 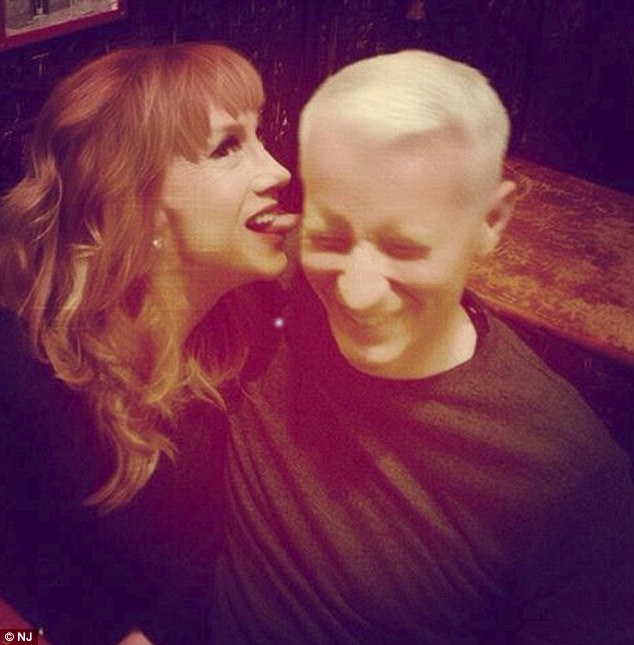 The pair had been friends for more than 17 years, but Griffin says their friendship is ‘over’ 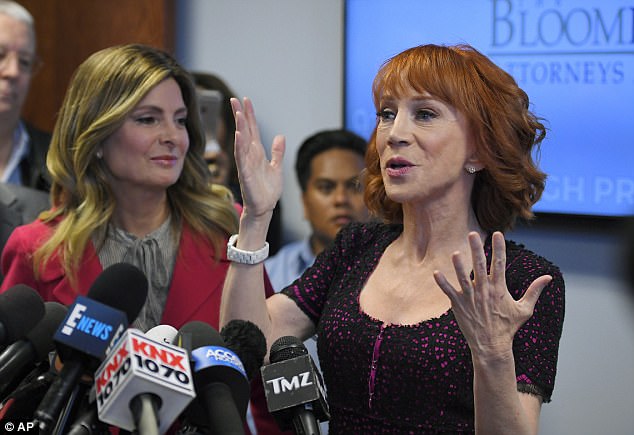 While discussing Cooper at a press conference in June, Griffin teared up, saying that they had not spoken since the photo scandal and that she was hurt by the tweet he had sent out 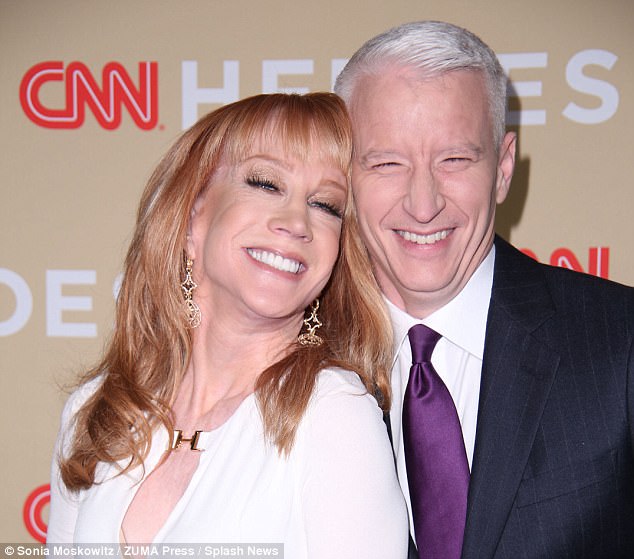 The fact that Cooper was telling people publicly they were friends, while not checking in with her, hurt Griffin deeply, she revealed

Soon after the stunt backfired back in May, Cooper sent well-wishes to his former colleague saying that he wished nothing but good things for his ‘friend’.

But the comments did nothing to repair the damage that Cooper wreaked after his tweet.

‘I had nothing to do with it, but I certainly understand why CNN made that decision. And look, I wish her well and I hope she bounces back and keeps doing what she does best, which is make people laugh,’ Cooper said.

Ultimately, the gag also backfired on Griffin, who lost spots in ads and had 15 live appearances across the country canceled from venues who were afraid to be affiliated with her after the stunt, which she estimates cost her more than a million dollars.

Griffin apologized for the shocking display in the immediate hours following the release of the shoot. 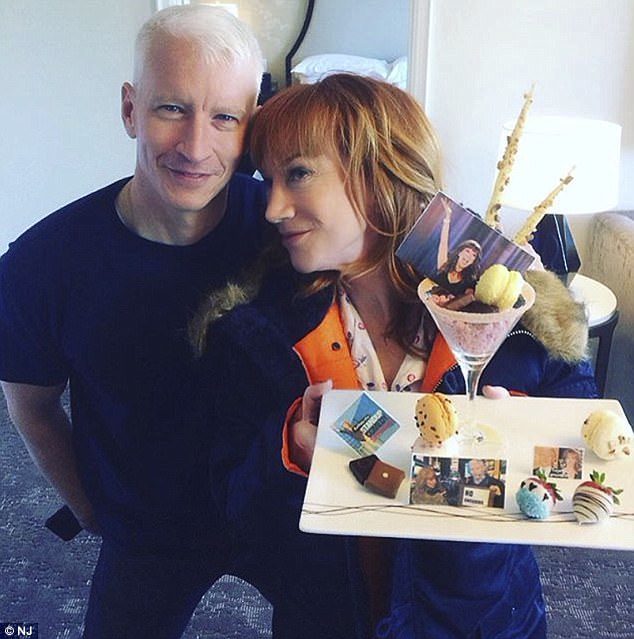 Cooper, 50, publicly denounced Griffin following the release of the photo. ‘For the record, I am appalled by the photo shoot Kathy Griffin took part in,’ he tweeted at the time 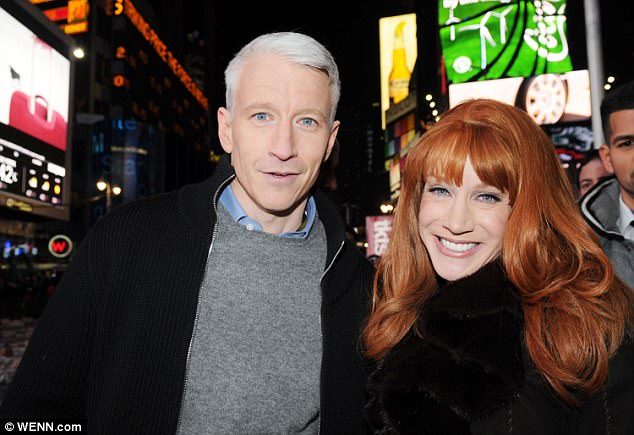 According to Griffin, in the following days, four of Cooper’s CNN colleagues reached out repeatedly to offer private support. Cooper, however, didn’t contact Griffin until August 10

‘I am sorry. I went too far. I was wrong,’ Griffin said about the shoot.

‘I’m just now seeing the reaction to these images. I’m a comic. I cross the line. I move the line then I cross it. I went way too far,’ she said. ‘The image is too disturbing. I understand how it offends people. It wasn’t funny. I get it. I’ve made a lot of mistakes in my career, I will continue. I ask your forgiveness.’

The Secret Service opened an investigation and CNN also fired her from her regular hosting gig on New Year’s Eve Live that she shared with Cooper.

In this most recent interview with New York Magazine, Griffin appears to have found some backbone.

‘Why are people still expecting me to apologize and grovel to a man that tweets like this?’ Griffin vented. ‘I’m a comedian; he’s our f***** president.’

‘President Trump just pardoned Joe Arpaio, who was essentially running a concentration camp in the Arizona desert,’ she said. ‘He said there are some good Nazis, and he’s kicking out young adults who were brought here as kids by their parents, and I’m the one who has to continue to apologize?’

Griffin held a June news conference where she broke down crying and claimed that Trump and his followers, as a result of their outcry against her photo shoot, ‘broke’ her.

During her conference, Griffin said, ‘What’s happening to me has never happened — ever — in the history of this great country, which is that a sitting president of the United States and his grown children, and the first lady, are personally — I feel — personally trying to ruin my life forever. Forever.’

During the conference, on the subject of Cooper, the comedienne teared up, saying that they had not spoken since the photo scandal.

When asked if CNN pressured Cooper into sending the tweet, she replied: ‘That hurt, that’s all.’