Katie Miller, the spokesperson for Vice President Mike Pence who tested positive for the coronavirus, announced she has returned to work after three negative results and that she is expecting a child with husband Stephen Miller, an adviser to President Donald Trump.

‘Back at work today after three NEGATIVE COVID tests. Thank you to all my amazing doctors and everyone who reached out with support. I couldn’t have done it without my amazing husband who took great care of his pregnant wife. #TransitionToGreatness,’ Miller tweeted Tuesday morning.

Miller, who serves as spokesperson for the White House Coronavirus Task Force, tested positive for the coronaviruson May 8th and Thursday marks her first day back at the White House complex.

She married Stephen Miller, a senior adviser to President Trump known for his hard line views on immigration, on February 16, 2020 at the Trump International Hotel in Washington D.C. President Trump, Vice President Pence and may members of the administration attended.

Katie Miller, the spokesperson for Vice President Mike Pence who tested positive for the coronavirus, announced she has returned to work 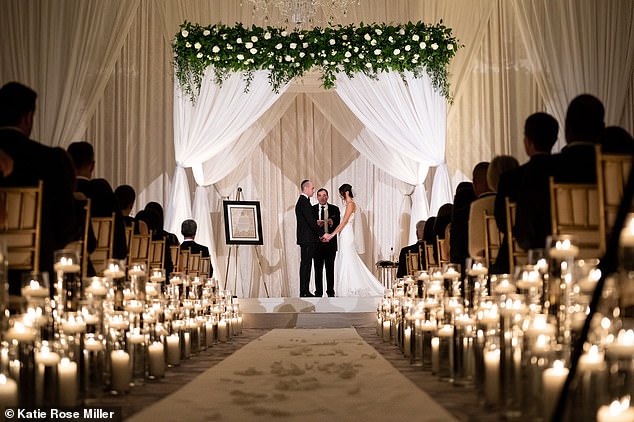 Katie Miller also announced she and husband Stephen Miller are expecting their first child; the couple married on February 16, 2020 at the Trump International Hotel in Washington D.C.

Miller’s positive result for the coronavirus test sent shock waves through the Trump administration. Her result came shortly after a Navy valet who served meals to the president tested positive for the disease.

While the valet was close to the president, Miller was a prominent figure with senior staff and a regular feature in the hallways of the West Wing. She would often walk around to talk to people, including stopping in the White House press room to check in with reporters.

She had regular contact with Trump, Pence, and senior members of the administration.

After her and the valet tested positive, the White House instituted new protocols for preventing the virus from reaching the president. Staff, Secret Service agents and members of the military were seen wearing masks. Additionally, senior staff began to get tested for the disease on a daily basis.

Trump also began a two week regimen of the anti-malaria hydroxychloroquine as a counter measure to possible exposure. The president claims the drug can help fight off the coronavirus but the FDA has issued a warning that only patients in the hospital with the virus should take the drug.

Pence tested negative despite his spokesperson diagnosis. He was seen wearing a mask around the White House in the aftermath. Additionally he and President Trump stayed apart for several days to ensure Pence wasn’t infected.

Trump admitted two weeks he was missing his vice president.

‘I haven’t seen Mike Pence and I miss him,’ Trump said. ‘We said for a little while we’ll stay apart because you don’t know what happens with this very crazy and horrible disease.’

Miller also was a constant presence in the White House press room when President Trump, the vice president and members of the coronavirus task force – including Dr. Anthony Fauci and Deborah Birx – briefed the media on the administration’s work combating the disease.

Fauci and Birx began wearing masks on a regular basis to White House briefings but both said they would not isolate at home as they were essential employees. 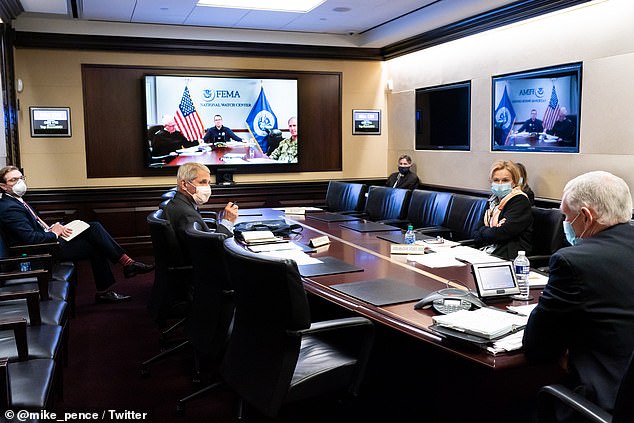 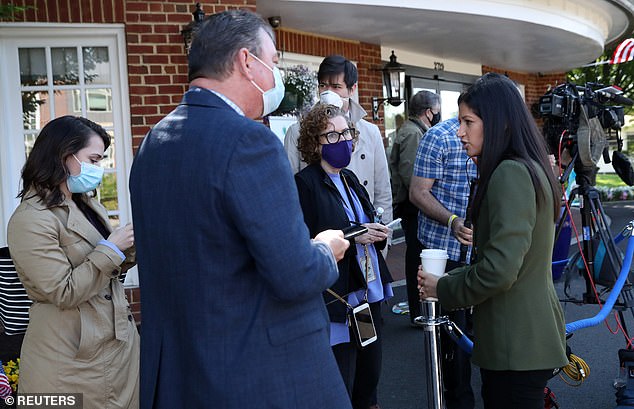 Katie Miller speaks with reporters as Vice President Mike Pence delivered supplies to a nursing home in Northern Virginia on Thursday, the day before her positive coronavirus test 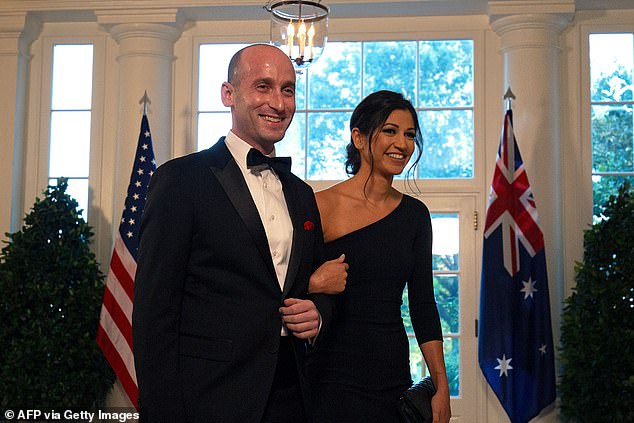 Katie Miller is married to White House senior adviser Stephen Miller; the two are seen at the September 2019 state dinner for the Australian prime minister 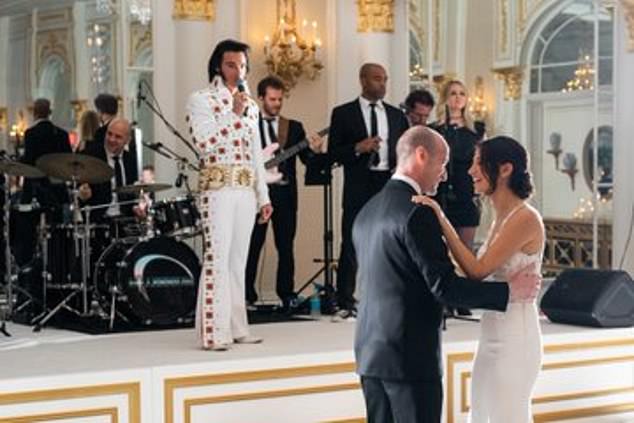 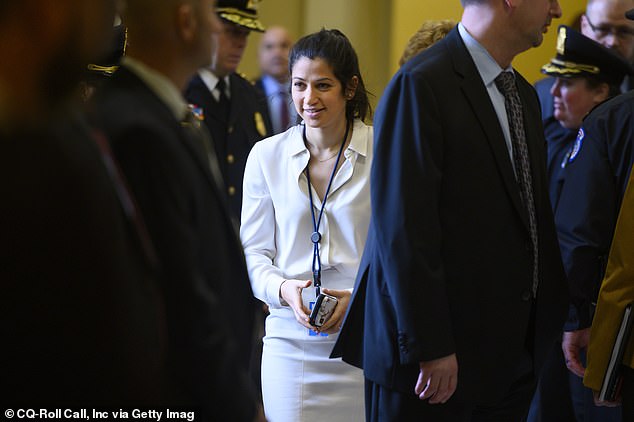 Katie Miller, then going by her maiden name of Katie Waldman, joined Pence’s office in September of 2019 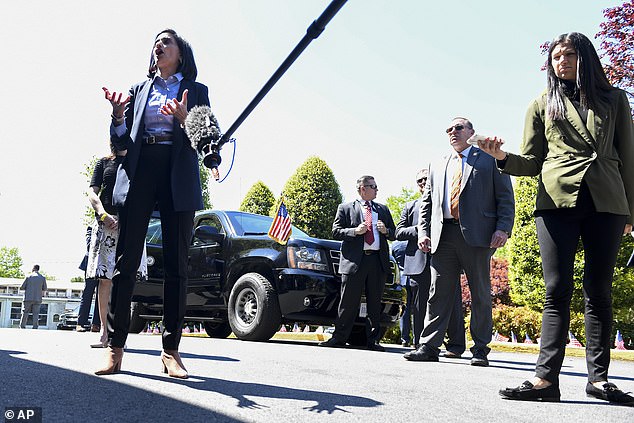 Trump said, at the time, he wasn’t worried about the risk of infection despite the virus moving closer to the Oval Office.

White House Chief of Staff Mark Meadows called the White House the ‘safest place that you can come to.’

He said additional safety protocols have been put place over the last 48 hours but declined to detail them.

‘I don’t want to get into all the procedures that we’ve embarked on but I can tell you that this – it’s probably the safest place that you can come to,’ he said.

‘The President’s physician and White House Operations continue to work closely to ensure every precaution is taken to keep the President, First Family and the entire White House Complex safe and healthy at all times. In addition to social distancing, daily temperature checks and symptom histories, hand sanitizer, and regular deep cleaning of all work spaces, every staff member in close proximity to the president and vice president is being tested daily for COVID-19 as well as any guests,’ Deere said in a statement to DailyMail.com.

The day Miller’s test result was revealed, Pence was not at the White House but in Iowa.  His flight to Des Moines was delayed nearly an hour that morning. Reporters traveling with the vice president reported several staffers exited the plane before it ultimately took off.

Miller was not on the vice president’s flight but had possibly been in contact with six people scheduled to fly. They were removed from the plane.

A senior administration official said the six were tested later Friday and the results were negative.

The official declined to say Miller’s level of contact with Pence but said Trump had not been in contact with her recently.

‘I’m not going to get into the level of contact the vice president had. The president has not had contact with this person recently,’ the official said. 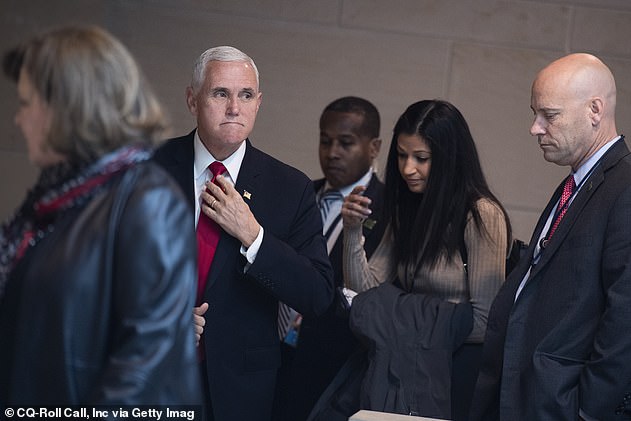 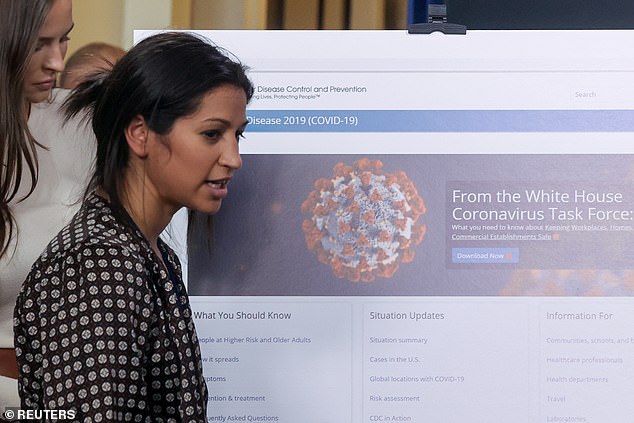 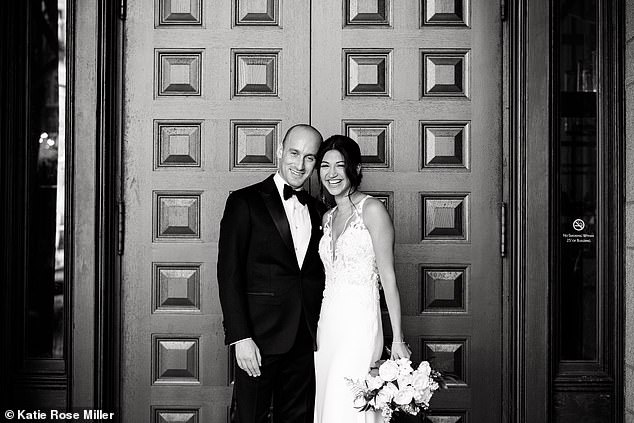 Stephen and Katie Miller at their February wedding at the Trump International Hotel in Washington D.C. It was attended by President Trump and Vice President Pence

‘This morning we had someone on the vice president’s staff test positive and so out of abundance of caution we went back and looked into all the person’s contacts most recently,’ a senior administration official said.

‘That’s why we asked some of our staff to deplane. Nobody else was exhibiting any symptoms or having any feeling of sickness. We asked them to go get tested and to go home out of an abundance of caution,’ the official added.

Only 10 members of Pence’s staff are tested daily and not every single person out of the hundreds who work in the Old Executive Office building, across the street from the White House complex.

Miller is the second person inside the White House complex to test positive in a week. In March another Pence staffer tested positive but that person did not have regular contact with the vice president.

The positive tests raised questions about the White House’s policy on trying to mitigate the spread of the coronavirus inside the complex, which includes the West Wing offices where the president works, the Old Executive Office building where many aides are located, the East Wing offices of the first lady, and the Executive Mansion where the first family lives.

Questions were raised about the safety of the nation’s leadership and the first family after a presidential valet tested positive.

The valet was part of the White House Military Office, an elite group of officers and enlisted men who are assigned to 1600 Pennsylvania Avenue.

The valet is not being identified but his duties included serving the president his meals – Trump likes hamburgers and steak – and accompanying the president on trips. In other words the valet was believed to have regular contact with Trump.

‘There is no one closer to the president physically, outside of his family, than the valets,’ Kate Andersen Brower author of ‘The Residence’ – a book about the White House staff – told DailyMail.com.

First Lady Melania Trump has been much more strict with the areas of the White House she oversees, including the residence and the East Wing, and requires staff to wear masks.

Melania Trump, who is tested regularly for the coronavirus, has advocated for people to wear face masks, shooting a video urging people to don one and was pictured wearing one herself.

When it comes to coronavirus testing, the White House uses the Abbott Labs test to detect the coronavirus, which provides results in about 15 minutes. It involves swabbing a person’s nostrils and waiting on the result.