Katie Price has revealed her shock after she was illegally advised to give her puppy Rolo cannabis oil before suffocated to death in an armchair.

The former glamour model, 42, could reportedly face a probe for giving the dog CBD oil after she was gifted the substance in a ‘puppy hamper’ from the dog’s breeders.

The late French bulldog, which was bought as a present for her daughter Princess’ 13th birthday, fell asleep under an electric chair after having the non-psychoactive cannabis derivative and later suffocated after the family’s nanny sat on the chair.

Horror: Katie Price has revealed her shock after she was illegally advised to give her puppy Rolo cannabis oil before suffocated to death in an armchair

Katie told the Mirror that she was unaware that it is illegal to give dogs the substance without a veterinary prescription, in accordance with the The Veterinary Medicines Regulations 2013.

The publication reported that offenders can face a fine or maximum jail term of two years.

Katie has since revealed that a vet told her giving the puppy CBD oil may have encouraged him to seek out a cosy place to sleep, such as the chair. 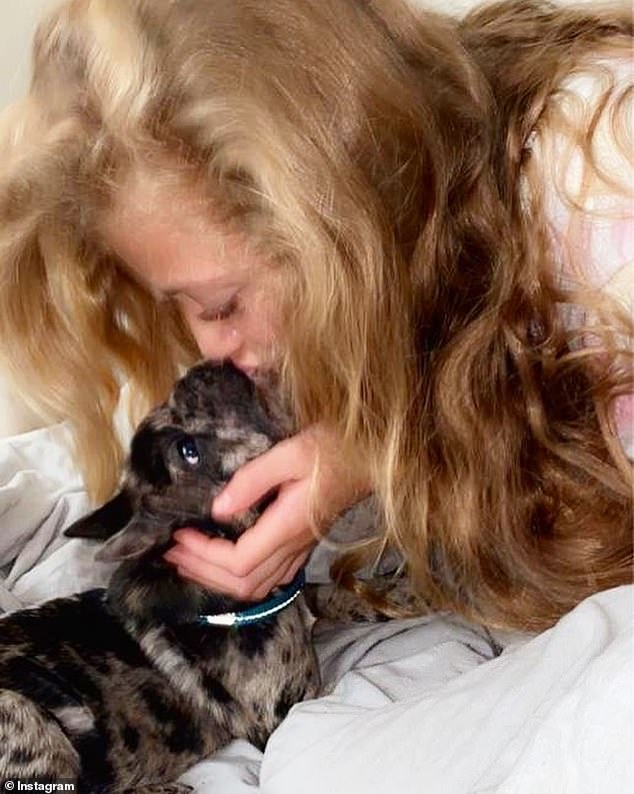 Sad: The late French bulldog, which was bought as a present for her daughter Princess’ 13th birthday, fell asleep under an electric chair after having the cannabis oil and later suffocated after the family’s nanny sat on him

A spokeswoman for Katie said: ‘Katie was told the oil was for dogs and safe. It was endorsed by the breeder. Katie will join forces with Peta and any other groups that need her to speak out.’

A source close to her added: ‘As awful as it sounds, this will bring some comfort to Katie in understanding why Rolo crawled into the space.

‘She feels let down too by a system that allows CBD oil to be marketed for pets despite it being illegal. Katie had backlash, hate mail, death threats and trolling over Rolo’s tragic passing. As a family, they continue to mourn.’ 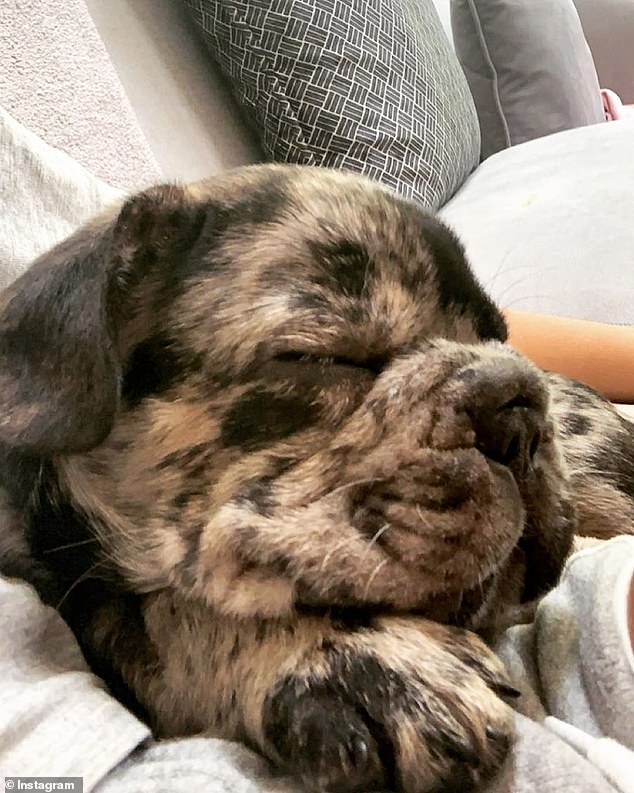 Penalty: The former glamour model, 42, could reportedly face a probe for giving the dog CBD oil after she was gifted the substance in a ‘puppy hamper’ from the dog’s breeders

The dog breeders who sold Katie the pup told the news outlet that they had no idea it was breaking the law and claimed that dogs can’t get sleepy from it due to the lack of THC.

They added that they also advised she give the puppy a small amount and suggested they didn’t know how much Katie had given Rolo.

MailOnline have contacted Katie’s representatives and the dog breeder for comment.

The French bulldog died after getting stuck in an electric armchair while the reality star was packing some bags in another room, reported The Mirror.

Rolo was given to Princess as a birthday present and is the third dog of the family’s to die in tragic circumstances. 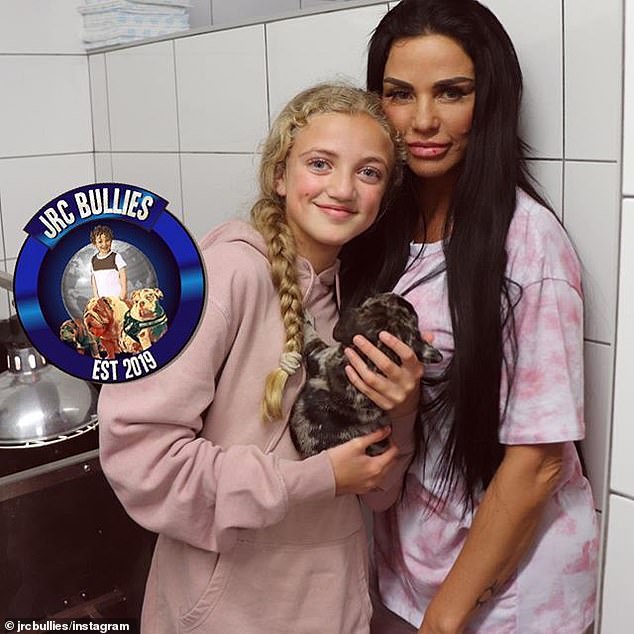 Tragic: Katie was slammed by animal rights activists after her daughter Princess’ puppy Rolo ‘suffocated when he got caught in an electric armchair’

Animal rights activists have slammed Katie online since news of her latest dogs tragic passing broke, with many even contacting the breeders.

Elisa Allen, director of animal rights group PETA, told the Mirror: ‘Katie must not be allowed to acquire any more animals.

‘At least three dogs and one horse have died on her watch in the last few years alone… her attitude is costing wonderful animals their lives.’

However the RSPCA said they couldn’t comment on whether they had received complaints about the reality star’s animals for legal reasons. 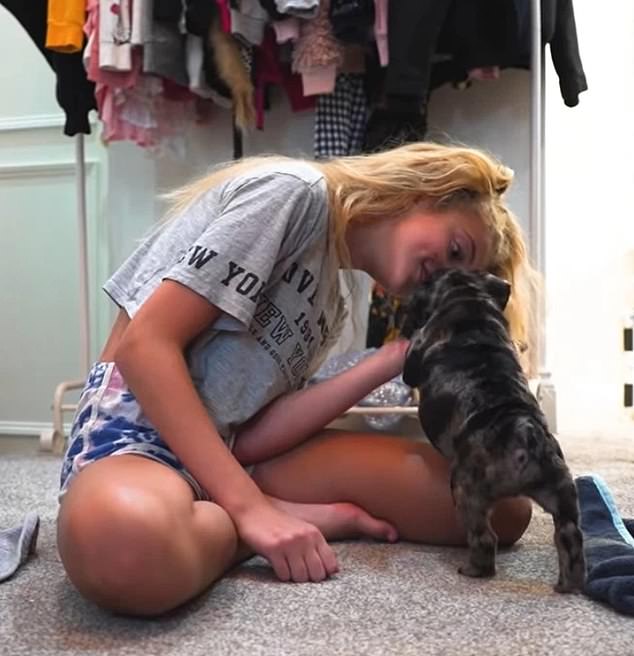 Devastated: Rolo was given to Princess (pictured together) as a gift for her 13th birthday

Dog breeders JRC Bullies took to their Instagram page after animal lovers started questioning them about why Princess was given a dog.

They asked that people stopped sending ‘vile hatred messages’ and said they would post a video explaining why the pup had been gifted to the family on Friday.

They wrote: ‘The outcome of our decision has understandably upset a lot of animal lovers, and I apologise from the bottom of my heart that you have had to read of this tragedy, but we can 100 % assure you all we did everything we could for Rolo moving in with his new family. 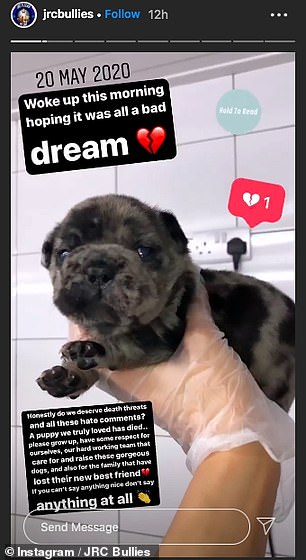 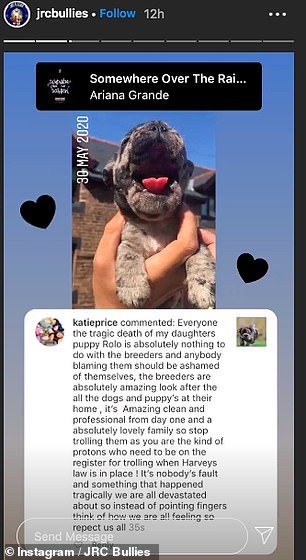 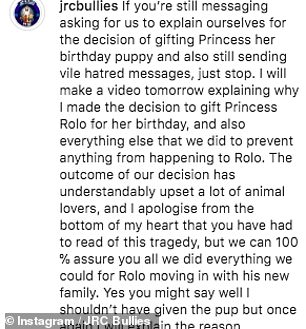 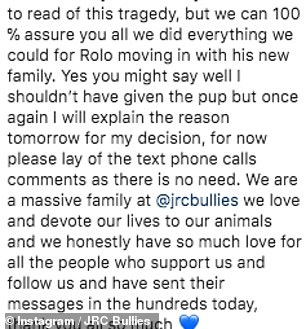 Speaking out: The breeders also said they would be explaining why Princess was given a dog in a video planned for Friday as well as thanking their followers for support

‘Yes you might say well I shouldn’t have given the pup but once again I will explain the reason tomorrow for my decision, for now please lay of the text phone calls comments as there is no need.

‘We are a massive family at @JRCbullies we love and devote our lives to our animals and we honestly have so much love for all the people who support us and follow us and have sent their messages in the hundreds today, thank you all so much.’

JRC Bullies also told the Mirror that they were ‘heartbroken’ and had told Katie not to leave the puppy on its own.

It is thought that she rang the company to tell them about Rolo’s death, explaining that she was packing in another room at the time. It was also reported that her five-year-old daughter Bunny found the pup. 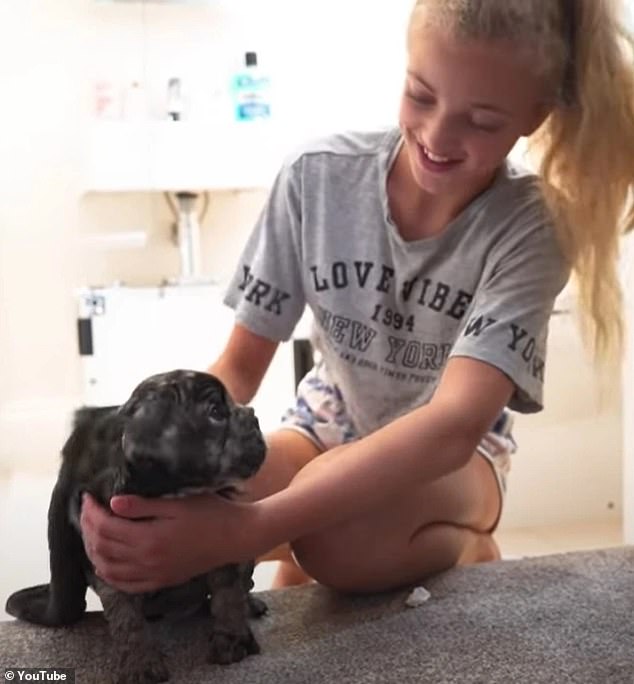 Tragedy: The reality TV star and her daughter were said to be distraught after their dog’s death