Boyson, 31, parked his black Audi R8 supercar worth £125,000 outside of Medway Magistrates’ Court on Thursday morning, following a difficult week in which he split from the former glamour model and mother of five.

Personal trainer Boyson pleaded not guilty to one charge of using threatening, abusive, insulting words or behaviour with intent to cause fear of or provoke unlawful violence. 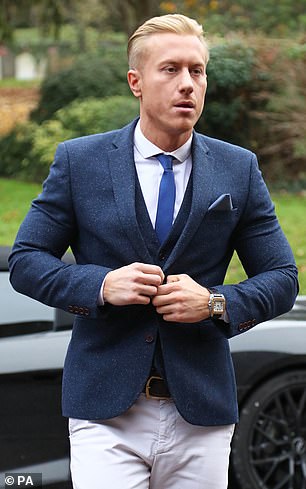 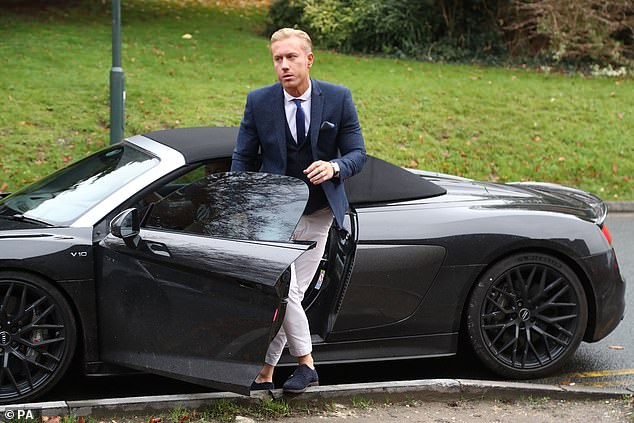 Boyson, 31, parked his black Audi R8 supercar worth £125,000 outside of Medway Magistrates’ Court on Thursday morning, following a difficult week in which he split from the former glamour model and mother of five

The alleged incident took place a day after his on again off again girlfriend Price, 41, was arrested by police after being found her slumped in a drunken state in the back of her pink Range Rover.

After a delay to opening proceedings, Mr Restell said: ‘At about 7am members of the paparazzi arrived at to take pictures of his then girlfriend Katie Price.’

He told the court Boyson had asked the photographers to delete their pictures and was even handed their memory cards to delete pictures himself.

The crown allege that Katie Price used a grey Range Rover to block the photographers from leaving the close. 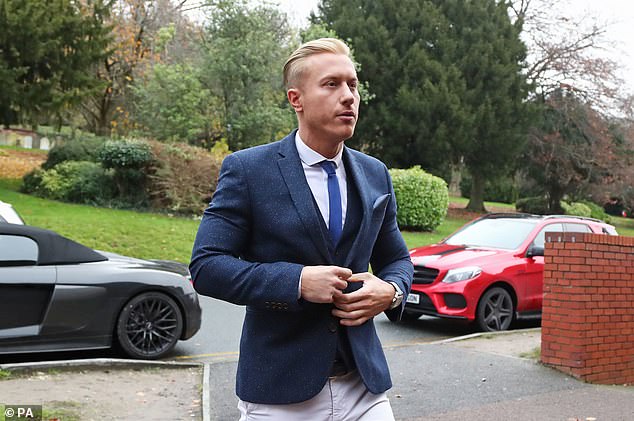 The alleged offence took place near Boyson’s home in Gravesend on October 11, 2018

One snapper called the police over Boyson’s ‘aggressive and threatening’ behaviour as he did not believe all the pictures had been deleted.

Photographers had been sent to Boyson’s home to get an ‘up to date’ image of Katie Price the day after she was arrested.

The court was told Boyson approached the photographers and demanded they delete the pictures they had of Katie – who he was in the relationship at the time.

Giving evidence, photographer Matthew Sprake, who called 999, said: ‘He was agitated. He was obviously not happy we had pictures of Katie. I felt quite concerned.

‘It was a case of ‘give me the pictures or I am going to smash the cameras over your head’.

‘It was very clear we weren’t going to leave the close with the pictures.’

Mr Sprake said he did hand over two memory cards to an ‘agitated’ Boyson but admitted they did not have pictures of Katie Price on them.

In dashcam footage played to the court, Boyson can be heard telling photographers: ‘It ain’t fair what you are doing.’

The court was told that when two plain clothes police officers arrived in the same street soon after – for a completely unrelated matter – Boyson mistook one of the PC’s as a paparazzi and became aggressive.

Despite being shown a warrant card, the court heard Boyson ‘did not believe he was real’.

Mr Restell told the court: ‘PC Blundell exited his vehicle and at that point a male later identified as Boyson shouted ‘grab that phone off him’.

‘He shouted at him for taking photographs.

‘PC Blundell backed away and pulled out his pepper spray and again showed his warrant cared.

‘Boyson photograph his warrant card as he said he was a fake police officer.

‘PC Blundell showed him his mobile phone picture gallery to appease him and prove no pictures had been taken.

‘PC Blundell was then threatened by Boyson who said he was going to break his jaw before stepping towards the PC.’

Magistrates were told Boyson’s father had to intervene and hold his son back from moving towards the PC.

‘Boyson got close enough to PC Blundell to cause him to raise his palm to push him back’, Mr Restell said.

‘The fact he tried to slip his father’s grip was further evidence he wanted to cause PC Blundell harm.’