I can. I try to walk my dog, a shih tzu called Happy, twice a day. He stars in both my recent TV shows [BBC’s Love, Lies & Records and ITV’s Girlfriends].

Yes. My husband, Anthony, is brilliant at cooking. I did all the cooking until I became an established writer. Then he took over to make sure I was fed.

While doing research for my TV series Fat Friends, I joined a slimming group to find out about the industry. I didn’t think I had a weight issue so, for the weigh-in, I put on my heaviest shoes with heavy stuff in my pockets. I was shocked when the girl said: ‘You are 2 st overweight.’ She said at 5ft 5in, I should be 9 st 1 lb. I was in my 40s — the last time I’d been 9 st was in my late teens. I lost 1 ½ st during my research. Now, I weigh about 11 ½ st. I am quite happy.

Chocolate and sweets. If I had a few glasses of wine, it would add up to a lot of sugar, so I don’t feel guilty about a bar of chocolate.

I’d never say never. I have seen it done really well, so who knows?

NO. My dad died at 61 from bilharzia, an infection caused by a parasitic worm that lives in tropical regions and harms the liver. He caught it in the swamps in the war. My mum died naturally at 82.

I’m alarming if I’m in pain. I take tablets and need a hot compress. 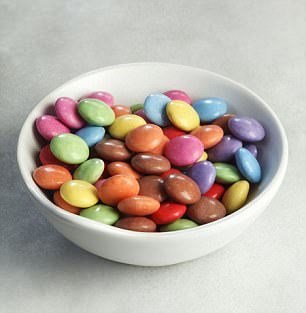 In 2000, I collapsed through overwork. My film Fanny And Elvis won a prize at the Dinard Film Festival in France. I was surrounded by press taking photos of me and I collapsed. I recall being in an ambulance, thinking I’d had a heart attack or stroke. Then a doctor came in and said: ‘You are suffering from extreme mental exhaustion.’ I got the next plane home and went to bed for a month. I pace myself now: I do yoga and have a massage once a week.

I see a homeopath and go to a nutritionist four times a year — not for any specific ailments, just for balance. It makes a difference to me, and that’s all that matters.

YES, after my mother died ten years ago. It was like losing everything. She was both mother and father to me, as my parents split when I was three. My doctor gave me some antidepressants. I think my girlfriends helped more than the pills just by letting me talk.

WHAT KEEPS YOU UP AT NIGHT?

Lots of things. Ideas for plots, or I fret about my daughters Gaynor [actress Gaynor Faye] and Yvonne and my grandchildren. If it isn’t them, it’s the dog. In the morning, I wake up and think: ‘How ridiculous was that?’

Girlfriends continues on ITV on Wednesdays at 9pm.