Kelly Clarkson jokes about the hilarious secrets to her weight loss

Kelly Clarkson has been looking a lot slimmer lately which she hilariously revealed she owes to Harry Potter and Spanx.

The 36-year-old is having the best year of her life as she managed to lose a ton of weight, become a judge on The Voice and host her first-ever solo gig at the 2018 Billboard Music Awards.

While promoting the season finale of The Voice, the mother-of-two revealed to Entertainment Tonight that her weight loss is all thanks to her glam squad who referred to as Harry Potter because they’re magicians that have helped her maintain a thinner figure.

Weight loss: Kelly Clarkson has been looking a lot slimmer lately which she hilariously revealed she owes to Harry Potter and Spanx (pictured last night at The Voice season finale) 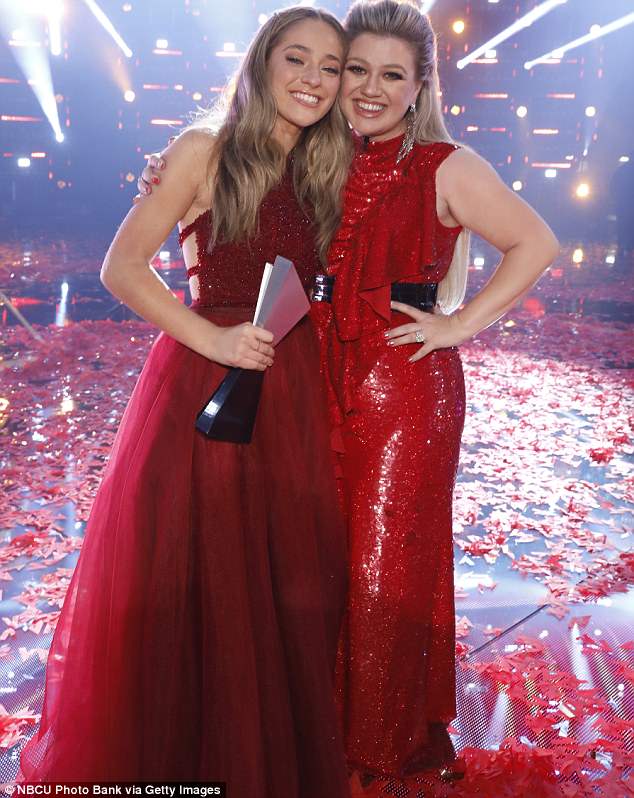 Skinny: The 36-year-old managed to lose a ton of weight and became a judge on The Voice where a singer from her team Brynn Cartelli (left) won last night 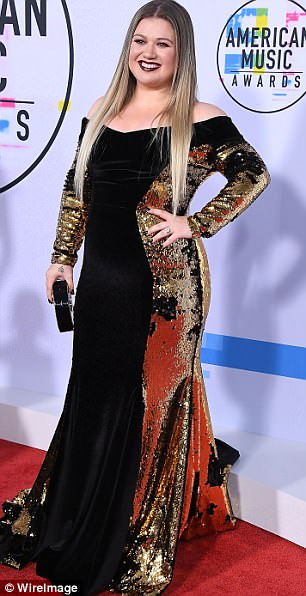 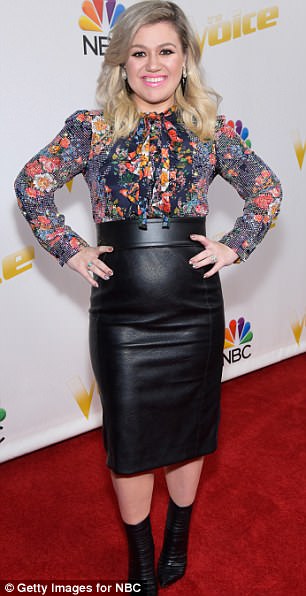 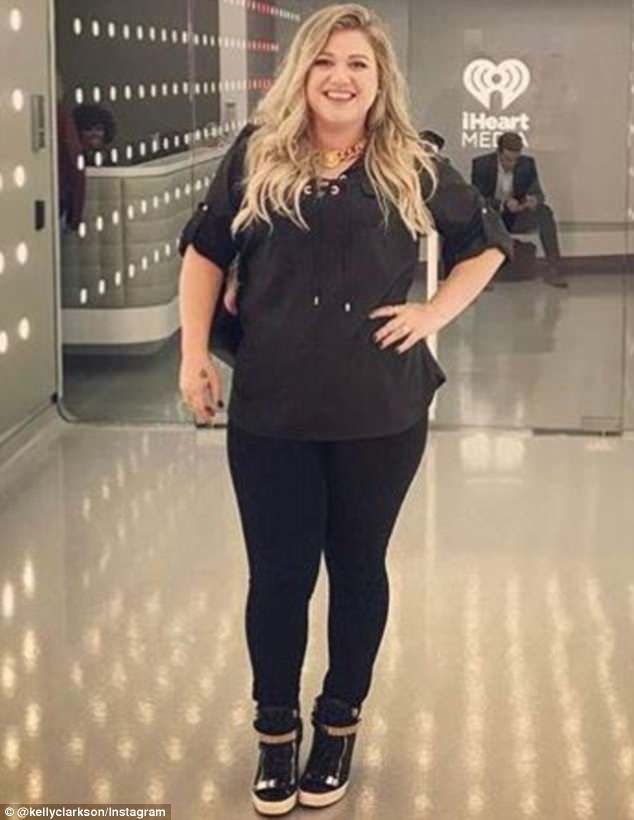 Weight issues: She has battled with weight issues for years and her single Whole Lotta Woman addresses the backlash she’s received about her size in the past (pictured September 2017)

‘I have to shout out my whole glam squad,’ Kelly gushed before joking, ‘I literally hired Harry Potter and Spanx, it’s all like a sausage.’

Kelly’s confession comes on the heels of Brynn Cartelli, a singer on her team winning this past season of The Voice last night and Kelly flaunting her taut frame in a black Christian Siriano gown on the red carpet as the host of the Billboard Music Awards on Sunday.

Although Kelly joked that she has Harry Potter and Spanx to thank, the singer has actually battled with weight issues for years and in fact, her single Whole Lotta Woman addresses all of the backlash she’s received about her size in the past.

Back in October Kelly introduced Whole Lotta Woman which refers to all of the, ‘fat jokes over the years and the criticism leveled at women being too skinny, too fat, too blonde. This is who I am and I’m happy,’ she declared. ‘Happy looks different on everyone.’

Hostess with the mostess: Kelly was the host of the 2018 Billboard Music Award on May 21 (pictured) and she looked super slim in this black Christian Siriano gown 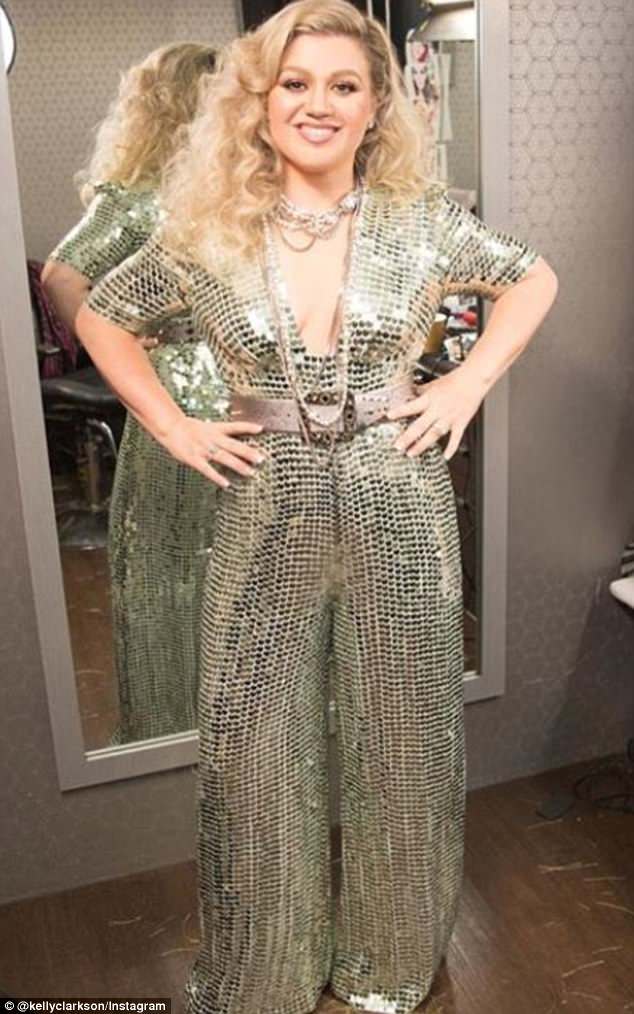 Transformation: The mother-of-two revealed that her weight loss is all thanks to her glam squad who have helped her maintain a thinner figure (pictured May 2018)

At the Rainbow Room showcase debuting the new song, Kelly spoke with DailyMail.com admitting, ‘The media has always been obsessed with my size and I have felt conflicted over the years. Do you address it? Do you talk about it? Because then you just add to the noise.

‘But people like me to talk about it, so I don’t really mind carrying that flag. I love that people come up to me and say: “Because you are comfortable in your skin, you have made me more comfortable in mine.” That’s the best compliment ever,’ she confessed.

Aside from the season finale of The Voice and the Billboard Music Awards, Kelly looked amazing in her newly trimmed figure at a promotional event in Los Angeles last week when she opted to wear a black leather skirt for the red carpet.

Critics: Kelly has battled critics about her fluctuating weight; (pictured left in December; right in May)

The songstress looked sensational in the black and white blouse that was tucked into her tiny waist and her legs were covered in a pair of black sheer tights as she stomped around in polka dot heels to match her top.

She highlighted her face with a slight smokey eye and a bright berry lipstick .

The Texas native – who rose to fame as the first American Idol winner – has collected three Grammy’s in her illustrious career over the last 12 years and during that time, she has battled critics over her fluctuating weight.

‘People think, Oh, there’s something wrong with her. She’s putting on weight. I’m like, ‘Oh, no! I’m sorry, but that represents happiness in my emotional world”, she told Redbook in 2017. 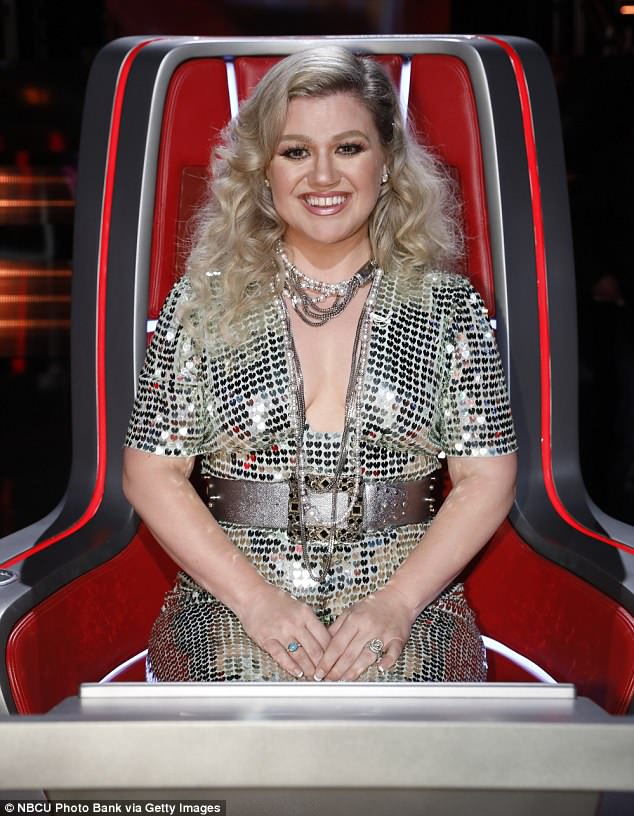 Jack-of-all-trades: Not only did The Voice judge win her first ever year on the show, she also hosted the Billboard Awards in her first-ever hosting gig

‘If you gauge your life on what other people think, you’re going to be in a constant state of panic trying to please everyone,’ she added.

And when someone tried to troll her last summer by tweeting ‘You’re fat,’ Kelly tweeted back ‘and still f***ing awesome.’

Meanwhile, the Voice judge was onstage at the Billboard Awards in her first-ever hosting gig which she did completely solo.

‘That was a DEFCON, red-alert, total run-for-the-hills moment,’ she told USA Today. ‘But then we figured out something fun and cool to do that’s totally in my wheelhouse. Now I’m not really nervous.

‘And I’m not afraid to look like an idiot, so we’ll start with that,’ she added. ‘Hands down, I will trip, there will be some kind of wardrobe thing, something will happen with Spanx,’ she said.

But she’s not concerned as she admitted, ‘I do not get embarrassed, honestly. If I trip, I’ll get back up and be like, ‘That’s funny!”’