George Conway blasted Trump on Twitter for refusing to acknowledge saying ‘Tim Apple’ instead of ‘Tim Cook’ in an interview, then misquoting the judge who sentenced Paul Manafort on Wednesday.

‘Have we ever seen this degree of brazen, pathological mendacity in American public life?,’ Conway fumed. ‘It’s beyond politics. It’s nuts. It’s a disorder.’

Donald Trump is a ‘pathological’ liar who has a ‘disorder’ that makes him tell untruths, according to Kellyanne Conway’s husband 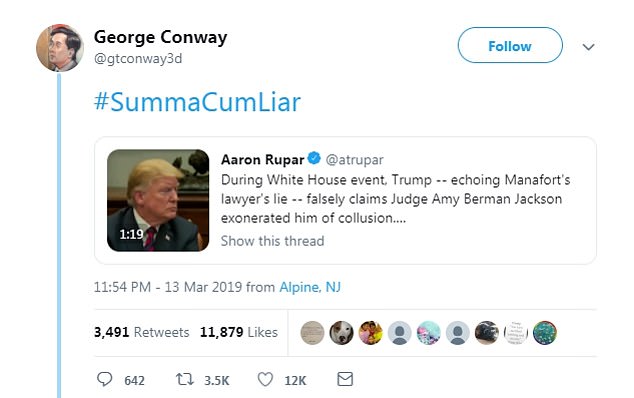 Conway also took issue with Trump denying that he said ‘Tim Apple’ in an interview instead of ‘Tim Cook’, who is the boss of Apple

Conway began by tweeting a video of Trump in a media briefing when he was asked about Manafort being sentenced to an additional three and a half years in jail over loans he received on a Manhattan apartment.

Trump claimed that the judge had agreed that there was ‘no collusion’ with Russia in the case, when in fact she said nothing of the sort.

In fact, District Judge Amy Berman Jackson actually attacked Manafort’s defense team for bringing the subject of collusion up in court, saying it was not relevant.

She said the defense team’s focus on collusion showed a lack of remorse for the charges in front of them, and factored into her decision to issue a harsh sentence. 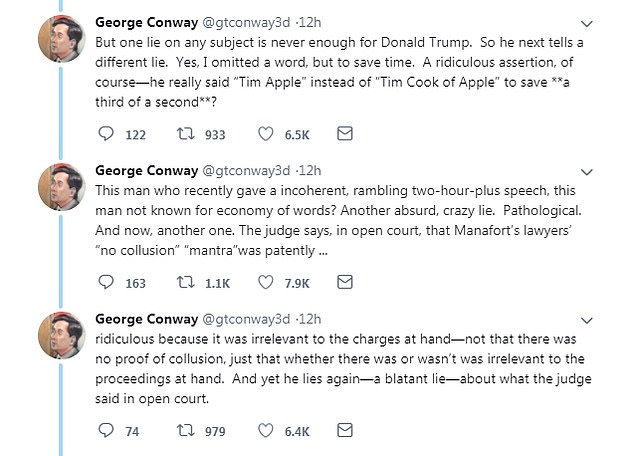 Conway pointed out that Manafort’s judge hadn’t cleared him of collusion, but had in fact refused to rule on the collusion count because it wasn’t relevant to this specific case 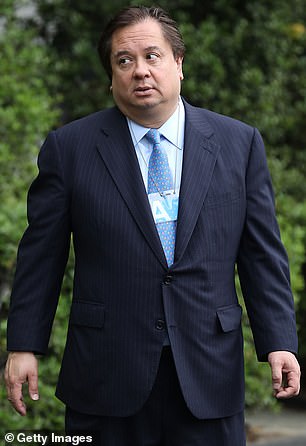 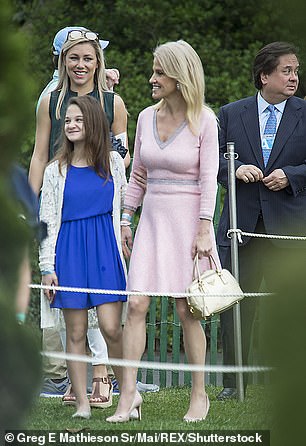 George Conway has been an outspoken critic of Trump during his administration, despite wife Kellyanne (right) being one of the President’s biggest cheerleaders

‘[It’s] pathological. It’s not rational, because it’s a lie that no reasonable person would believe. It undermines his credibility. It’s self-defeating,’ Conway said.

He also took issue with a press conference last week during which Trump accidentally said ‘Tim Apple’ while referring to Tim Cook, the boss of Apple.

At first, Trump denied making the mistake, despite it being caught on camera.

The President then issued a tweet several days later to say he was saving time by saying ‘Tim Apple’ instead of ‘Tim Cook of Apple’.

Conway added: ‘A ridiculous assertion, of course—he really said “Tim Apple” instead of “Tim Cook of Apple” to save **a third of a second**?

‘This man who recently gave a incoherent, rambling two-hour-plus speech, this man not known for economy of words? Another absurd, crazy lie. Pathological.’

He continued: ‘These are just two of … how many examples? Hundreds? Thousands? Is it possible to count?

‘At any level of government in this country, in any party, have we ever seen anything like this?

‘Whether or not impeachment is in order, a serious inquiry needs to be made about this man’s condition of mind.’