Ken Starr: Trump’s articles of impeachment ‘are being drawn up’

President Clinton’s impeachment investigator Ken Starr said Wednesday that Gordon Sondland’s testimony ‘confirmed’ that ‘articles of impeachment are being drawn up’ against President Trump, calling it one of those ‘bombshell days.’

‘What we heard from the chairman just now is “it’s over,” we now know – this is his position – we now know that the president, in fact, committed the crime of bribery, to something of value. That’s litigable,’ Starr explained during a hit on Fox News Channel. ‘But I think the Articles of Impeachment are being drawn up, if they haven’t already been drawn up. And so it depends, will it be bipartisan and so forth.’

Ken Starr, the former special prosecutor whose report led to President Clinton’s impeachment, said Wednesday that Gordon Sondland’s testimony ‘confirmed’ that articles of impeachment against President Trump would be drawn up 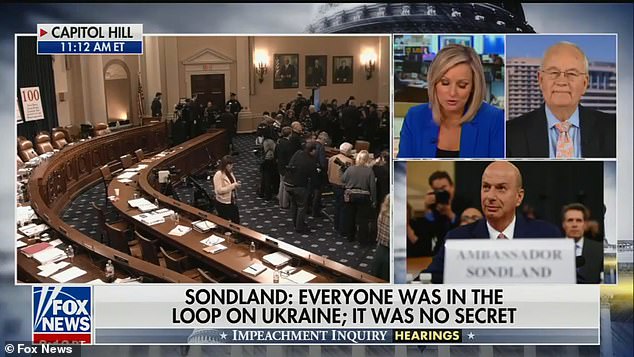 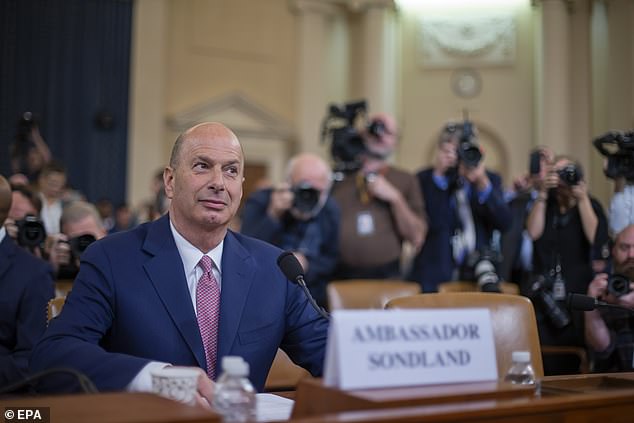 U.S. Ambassador to the European Union Gordon Sondland testified Wednesday and implicated President Trump and others in a pressure campaign in Ukraine. He also complained that his testimony was hampered by the Trump administration not giving him access to documents 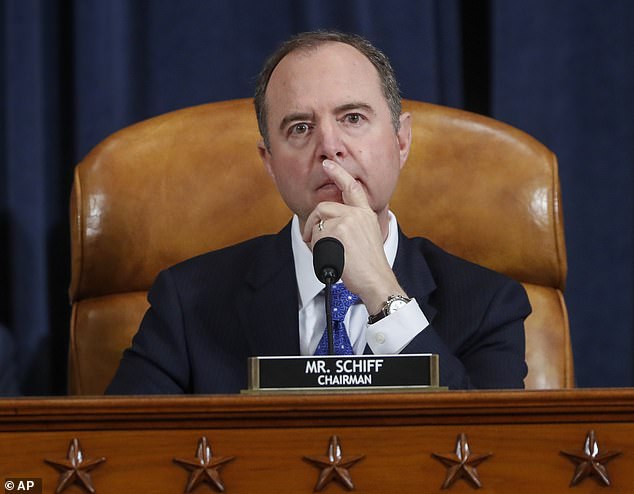 House Intelligence Committee Chair Adam Schiff told reporters during a break that Sondland’s testimony proved that the president engaged in ‘bribery.’ Questions from the Democratic counsel also indicated that the Democrats could draft a contempt of Congress article

‘I think today’s testimony is among the most significant evidence to date,’ Schiff told reporters outside the hearing room. ‘It goes right to the heart of the issue of bribery as well as other potential high crimes or misdemeanors.’

‘We can now see the veneer has been torn away,’ the California Democrat added.

Schiff said that Sondland, the U.S. ambassador to the European Union, confirmed why Secretary of State Mike Pompeo and Trump didn’t want any documents provided to Congress.

‘Because apparently they show – as Ambassador Sondland has testified – that the knowledge of this scheme to condition official acts, a White House meeting and $400 million in security assistance to an ally at war with Russia – was conditioned on political favors the president wanted for his re-election,’ Schiff said.

The House Intelligence Committee chair added that it was a ‘very important moment in the history of this inquiry.’

On Fox, Starr floated that Trump may have ‘covered himself’ by saying on the phone with Sondland that there was ‘no quid pro quo.’

‘The record is muddled,’ Starr explained, saying that Wednesday’s testimony only amounted to Sondland’s ‘understanding.’

That being said, ‘It doesn’t look good for the president substantively,’ Starr added.

Starr said that Sondland also provided fodder for another potential Article of Impeachment.

The former Clinton-era independent counsel noted that Schiff had been looking at the articles of impeachment approved by the House Judiciary Committee in President Richard Nixon’s case. The third was contempt of Congress. ‘Contempt in the sense that you’ve stood in the way of this investigation,’ Starr explained.

‘Ambassador Sondland spoke vehemently and bitterly about his lack of records to help him,’ Starr said, pointing to comments the ambassador made throughout his testimony Wednesday, in which he said the State Department refused to provide him with any relevant documents.

Starr noticed that the first question asked by Daniel Goldman, the Democrats’ counsel, was about obstruction, with Goldman saying to Sondland, ‘you have not had the ability to refresh you recollection, you’re not a note-taker and so-forth.’

‘We already have one article of impeachment,’ Starr said. ‘That got drawn up today, thanks to Ambassador Sondland’s say – it’s not a complaint now by the House chairman or anyone on this committee it is from a witness.’

Starr described Sondland as sounding ‘quite bitter, almost impassioned’ that the Trump administration was holding up his notes.

‘So now we have a process crime, Contempt of Congress,’ Starr said.

Looking again at the Nixon example, Starr also wondered if Republican senators – who were the ones to tell Nixon it was time to go before he was impeached – would do the same to Trump.

‘The real issue is if senators are watching,’ Starr said. ‘Are senators going to now say in light of what we hear today … we need to make a trip down to the White House.’

Nixon is the only U.S. president to ever resign.