A father who sent a smiling Snapchat picture of his son to the boy’s mother before fatally beating him in a brutal assault that left him with 39 separate injuries has been jailed for at least 24 years.

The two-year-old had also been given cocaine in the hours before he died, Northampton Crown Court heard.

The toddler was screaming in agony for an hour or more before Kennedy called for an ambulance. That delay also contributed to the death of his son, who he had only known for 10 weeks.

A post mortem examination revealed at least 13 rib fractures from at least three separate attacks, indicating that Dylan had been previously abused. He had been struck with a rod or electric cable at least three time.

When the police searched 31-year-old Kennedy’s flat in Arthur Street, Northampton, it was found to be untidy, cluttered and dirty with numerous ‘hazards’ for the toddler including drugs, ash trays in easy reach and dirty nappies.

Sentencing him to life, the judge told him: ‘In the morning of the Friday 15 December 2017 you woke late by reference to Dylan’s normal routine, at 10am. By this time, Dylan would have been awake for a few hours, left to his own devices to roam in a flat which contained Class A drugs and your drugs paraphernalia.’

The judge went on: ‘Whatever triggered the assault, you lost your temper with him and inflicted a savage and sustained attack on him. 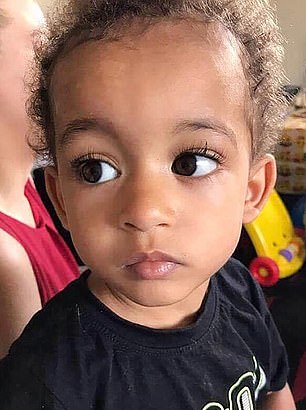 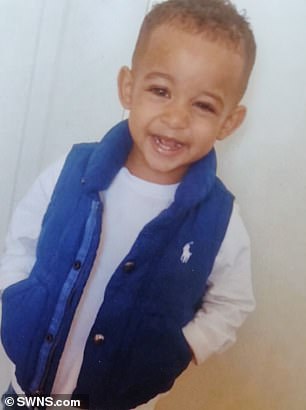 The two-year-old had also been given cocaine in the hours before he died, Northampton crown court heard

‘You undoubtedly beat Dylan in a fit of anger and/or stress so hard as to fracture his ribs and tear his liver. You used some sort of object to beat his arms.

‘The expert evidence confirmed that injuries could have been inflicted in a short period of time, but they were multiple and all over his body, including his face and arms.

‘Dylan would have been in agony, bewildered and terrified. Slowly his condition would have deteriorated before your eyes, going from screaming and crying to curling up and trying to avoid movement.’

The judge said Dylan would have been ‘traumatised, afraid and bewildered, as well as being in excruciating pain.’

She said his failure to call for medical assistance until he was effectively dead, deprived him of any hope of survival.

At the start of the trial prosecutor Jonas Hankin QC told the jury: ‘On December 15, 2017, while in the sole care of his father, Mr Raphael Kennedy, two-year-old Dylan Tiffin-Brown collapsed into cardio-respiratory failure. His heart had stopped and so had his breathing.

‘An ambulance was called at just after half past twelve in the afternoon. He was rushed to hospital, but could not be revived and he was declared dead at five past one.

‘The post mortem examination revealed multiple lacerations to his liver as well as substantial bleeding into the abdominal cavity.

‘The cause of his death was ultimately declared to be blunt force abdominal injury.’

Pathological evidence suggested Dylan’s fatal injuries were inflicted at least two hours before his death, at around 11am.

‘It is very likely that the delay in presentation for medical treatment – between around 11am and just after half past 12 – contributed to death in this case,’ said the prosecutor. 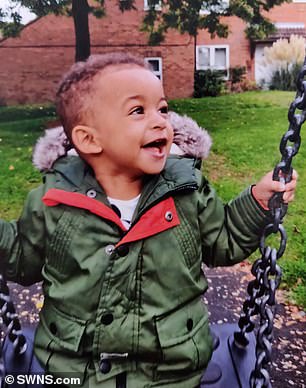 The court heard Dylan had been ‘punched, kicked and whipped’ by his father, sustaining 39 separate injuries

He added: ‘During that period of time Dylan would have appeared extremely distressed. The injuries to the abdomen would have caused severe pain and would have made it difficult for Dylan to breathe without pain.

‘The combination of injuries would have made it extremely difficult for Dylan to move, and it is most likely he would have been lying down.’

On the injuries, Mr Hankin said: ‘They included distinctive tram-track bruising to both arms, which indicate that Dylan was hit with a thin straight object, such as a rod or electrical cord.

Dylan’s speech was developing normally for a two-year-old and if he was injured or in pain, he could and would say: ‘hurt, hurt.’

The jury heard that Dylan was born to 16-year-old Taylor Tiffin on 25 November 2015. She was in a relationship with another man at the time of his birth, but on 28 September last year it was established that Mr Kennedy was the father.

Following that discovery, it was arranged for Dylan to stay at Raphael Kennedy’s flat for increasingly lengthy periods of time.

The police raided unemployed Kennedy’s flat on 18 October last year to arrest him for failing to attend court as a witness.

During a search, officers found heroin, cocaine and cannabis as well as a phone for drug dealing, scales and packaging – items associated with the sale of drugs.

On the night before Dylan died, Kennedy had texted the boy’s mother to tell her his cold was really bad.

The court heard the boy had kept picking up his hat and coat and told him he wanted to go home to his mother.

‘He said Dylan’s nose was running and that he had had to change Dylan’s nappy ten times in five minutes,’ said the prosecutor. 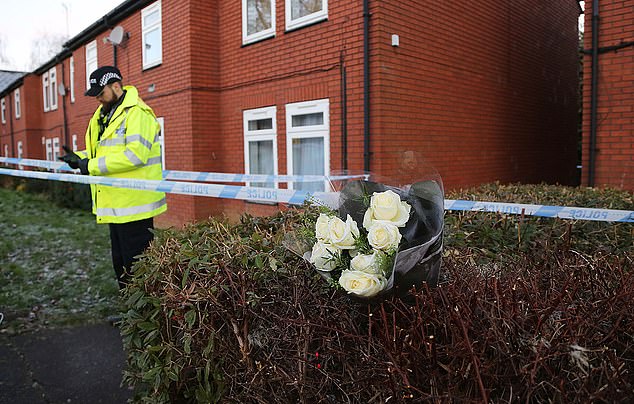 Flowers are pictured at the scene of the murder in Northampton. During a search of the property, officers found heroin, cocaine and cannabis as well as a phone for drug dealing, scales and packaging

At a minute past midday on 15th, Kennedy telephoned Dylan’s mother and told her he had fallen over on the way into town and had banged his chin, but that he ‘seemed fine.’

When Kennedy dialled 999 for East Midlands Ambulance Service at 12.32, he said his son was ‘floppy, not responding and not breathing.’

The prosecutor said: ‘Mr Kennedy reported that Dylan had been responding a minute ago and was drinking juice. He also reported that the child had fallen over earlier and grazed his chin and suggested he might be concussed.’

Mr Hankin told the jury that Kennedy told the first paramedics who arrived at the scene that Dylan had been ‘outside playing and had fallen and hit his head.’

His heart was not beating and he was not breathing. A helicopter was called, but it could not land and he was taken to hospital by ambulance.

Kennedy rode with his son in the ambulance. ‘While resuscitation was being carried out, bruises were noticed around Dylan’s abdomen, which raised suspicions among the rest of the attending team.’

Dylan was declared dead at 1.05pm.

In the witness box, Kennedy admitted his main income came from selling heroin and crack cocaine. He had previously been convicted of causing grievous bodily harm after breaking the jaw of an ex-partner.

He described himself as a ‘fantastic father’ and blamed another man for the killing.

Defending, Michael Mather-Lees QC said: ‘There is no evidence of him administrating the drugs. There is clear evidence of gross negligence. ‘

He said Dylan had been the victim of a ‘short hideous attack.’ 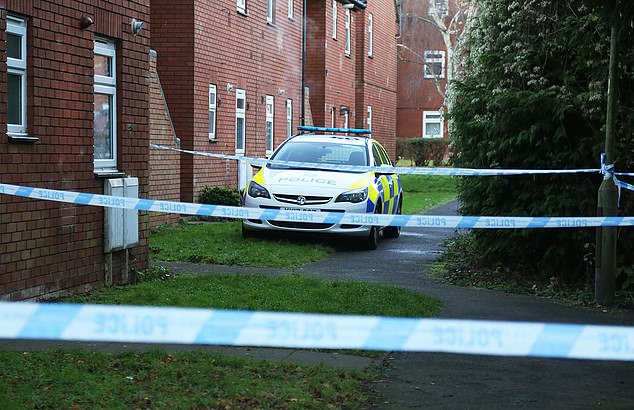 After the hearing, DCI Ally White said: ‘There are no winners in this sad case. On December 15 last year two families lost a grandson, killed at the hands of his father. A person he had known for only 10 weeks.

‘Raphael Kennedy beat his son with such ferocity that he caused multiple rib fractures and devastating internal haemorrhaging of major organs.

‘This caused life-threatening injuries and, despite the unbearable pain and suffering that Dylan would have been in, Kennedy failed to call the emergency services for a significant period of time.

‘It is unimaginable for most of us to believe that a parent could be responsible for killing their child. Sadly, Dylan was brutally beaten to death by his father, just 10 days before Christmas.’

In a statement Dylan’s mother Taylor Tiffin said: ‘Dylan was truly the most perfect little boy you could ever meet. His love was the best feeling in the world.

‘He had a smile as bright as the sun, his eyes were crystals like the stars above and his love was the best feeling in the world.

‘Dylan loved singing and dancing, but now he will be dancing in the sky. He had the ability to always make you smile. His personality made him so special.

‘Knowing I won’t get to hold my baby again leaves a pain like no other.’