An ‘extraordinary’ young head teacher known for his no nonsense approach to discipline was found hanging at his home following a marriage breakdown, an inquest heard today.

Gary Vyse hit headlines in 2016 when he banned false eyelashes, fake tan, heavy foundation and lipstick at the school where he was head.

Since the 37-year-old had a meteoric rise through the ranks and in just three years he became chief executive of six schools across Kent. He was considered one of the most influential educational leaders in the area.

Mr Vyse, a father of two young children, died at home and was found by ‘a friend’.

Gary Vyse, 37, a super-strict headmaster known for banning false eyelashes and fake tan who was found dead at his home had suffered a breakdown of his marriage, MailOnline can reveal

Mr Vyse, who was chief executive of the Williamson Trust and head of the Hundred of Hoo Academy, was found at his £350,000 three-bedroom home in Rochester, Kent, on February 12.

Students from Hoo Academy also paid their respects by bringing flowers to the school as they returned from their half term break.

In 2016, Mr Vyse criticised parents for allowing their children to attend school in heavy makeup saying it wasn’t a ‘fashion parade’.

Weeks later he made headlines again after crashing his £45,000 BMW 428i while twice over the legal limit.

Pleading guilty at Mid Kent Magistrates’ in October 2016, he was banned from driving for 18 months and apologised for the ‘moment’s recklessness’. 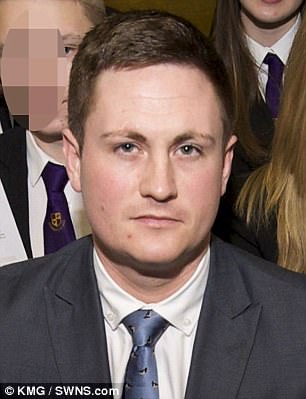 In a statement he said: ‘Many will know of my ‘no excuses’ policy for pupils at my school and that is something that I myself also live by.

‘My actions were wrong and this is something I will always regret. I would like to apologise for what has happened, and reassure you that the moment of recklessness which has caused great embarrassment for me, was incredibly out of character and it’s certainly not something I condone.’

His bosses said they were disappointed by his actions but added they were ‘aware of the extenuating circumstances that surrounded Mr Vyse that preceded the incident.’

After his death tributes were paid to the head by his fellow teachers and local politicians.

Micheal Costello, chair of The Williamson Trust, said: ‘We are all shocked and saddened by the loss of such a strong and influential leader.

‘Gary was an extraordinary individual with a passion for education, and a real drive to do the best for the Trust, its staff and its students.

‘Gary had been part of the Trust since its inception in April 2011. He was always dedicated to achieving the best possible outcomes for the children of the Trust.

‘The Williamson Trust’s board of Directors and Senior Leadership Team will help guide our schools as we come to terms with the loss of Gary.

‘Our thoughts and prayers are with Gary’s family and friends.’

His family did not want to comment on his death, nor did his ex-wife Kathy, 34, a science teacher. When asked about his death at her Gillingham, Kent, home, she replied: ‘I’d rather not say anything.’

Kelly Tolhurst, Conservative MP for Rochester and Strood, said: ‘I am devastated and so very sad to hear the news. I am so very proud of Gary and what he has done for education in Medway.

‘He was one of our best and we were so lucky he was here. My thoughts and prayers are with his family, friends, colleagues and pupils at this horrendous time. A tragic loss.’

Neighbours said they saw police and paramedics at the home following the discovery of his body, but since he moved in 18 months ago they rarely saw him. 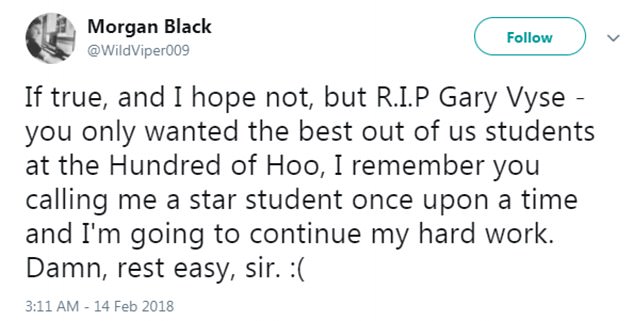 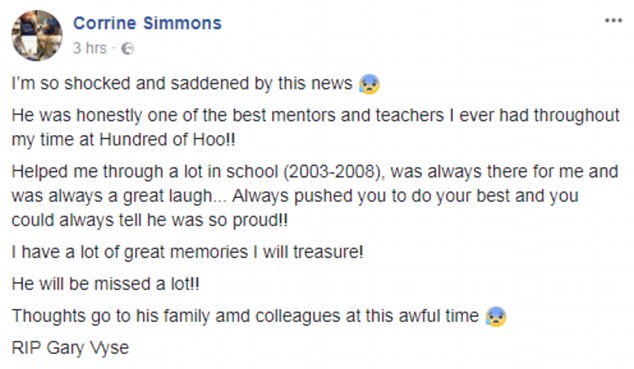 ‘As well as being someone I valued as a professional friend and colleague, Gary had been a leading light in driving real improvement in education in Medway and in shaping the way we educate our young people.

‘His track record, drive and energy in championing education was outstanding and he will leave a lasting legacy for which we are very grateful.

‘Our thoughts at this very sad time are with his family and all the students and staff of The Williamson Trust family who we know will miss him greatly.’

Dominic Herrington, regional schools commissioner for South East and South London, said: ‘I am deeply saddened by this news.

‘We always had the utmost respect for Gary’s dedication to improving the life chances of children at The Williamson Trust. Our thoughts are with his family and those who knew him.’ 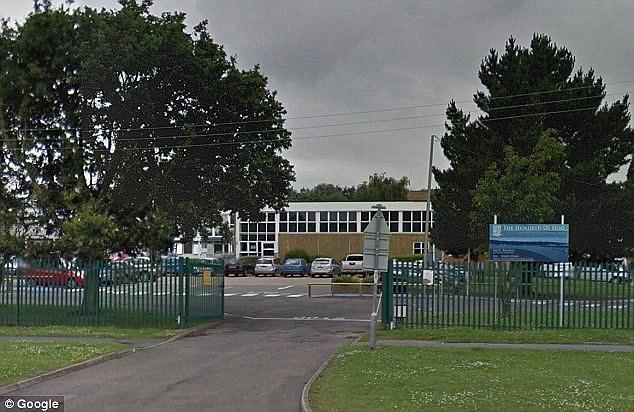 Mr Vyse criticised parents in June 2016 for allowing pupils at Hundred Of Hoo Academy in Rochester, Kent, to wear heavy make-up, telling them: ‘School is not a fashion parade’

Former students and friends took to social media to praise Mr Wyse for his work. Carmen Jane Robinson posted on Facebook: ‘If it’s true about Gary Vyse then it’s very sad news and my thoughts go out to his young family.’

Corrine Simmons posted: ‘I’m so shocked and saddened by this news. He was honestly one of the best mentors and teachers I ever had throughout my time at Hundred of Hoo!

‘Helped me through a lot in school (2003-2008), was always there for me and was always a great laugh. Always pushed you to do your best and you could always tell he was so proud!’

Mr Vyse rose to prominence during a glittering teaching career. He became head teacher of the Hundred of Hoo Academy in September 2011.

The academy had been placed into special measures in April 2009, but by December 2012 Ofsted rated it ‘good’.

Under his guidance, the academy rose to the top 20 per cent of secondary schools in England and Wales for the pupils’ progress.

The full inquest will be held on May 8, police are not treating the death as suspicious.