A 25-stone woman who was desperate to become a mother shed nearly half her body weight within a year to fall pregnant with her ‘miracle baby’.

Toni Osborn, 30, from Birchington in Kent, was a size 28, and had been told by doctors she was unlikely to conceive while morbidly obese.

After four years of failed attempts to get pregnant, Toni underwent a gastric bypass operation on the NHS in March 2015, and swapped her regular diet of pizza, chips, crisps and sausage rolls for healthier options.

Less than a year after the operation Toni – who had shed 10st 10lbs – was thrilled to learn she was pregnant.

Now a doting mother to son Harvey, Toni, who was called ‘fatty’ by bullies as a schoolgirl, weighs 15st and is a dress size 16.

She loves her new figure, but ‘more importantly’, she says, ‘I finally have my miracle baby boy’.

Toni Osborn, 30, pictured in October 2017, was thrilled to learn she was pregnant with her first son less than a year after having a gastric bypass operation 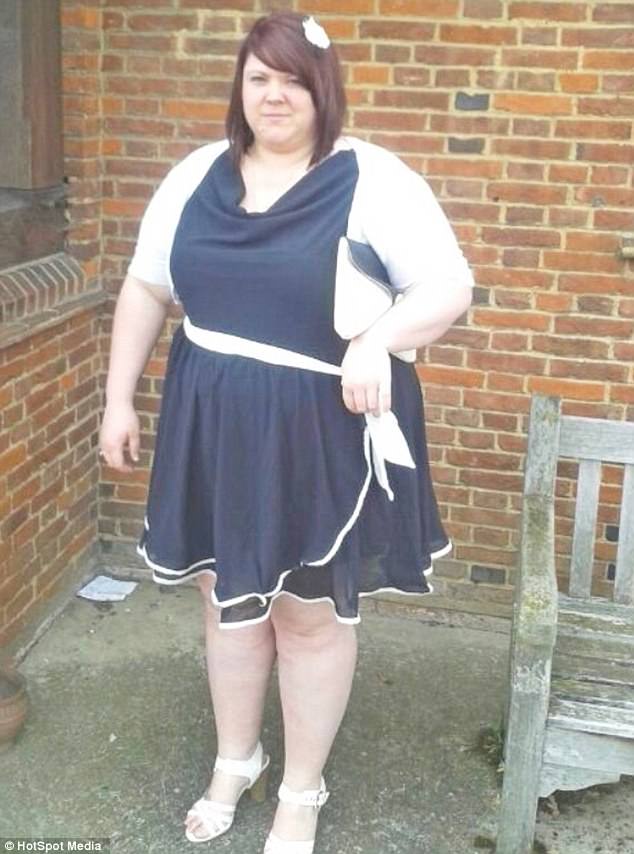 Toni, pictured here in December 2014, was 25 stone at her heaviest and a size 28 before she decided to overhaul her life 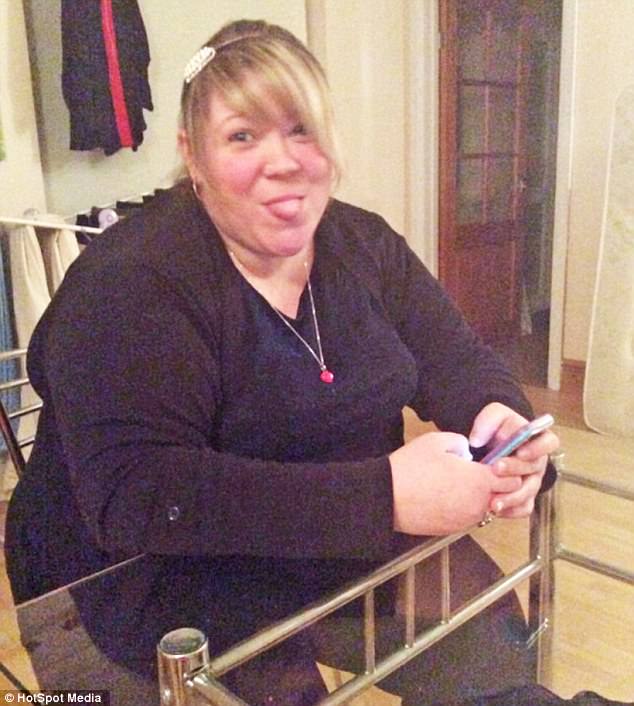 Toni says she began to pile on weight after her grandmother passed away when she was 12-years-old. Left heartbroken by her death, Toni ‘sought comfort in food’.

‘I’d easily polish off six packets of crisps in one sitting,’ she said.

‘My classmates at school were horrible and tormented me about my size, calling me ‘fatty’ every day.

‘I tried to laugh it off and act like the ‘funny fat girl’ but it really hurt my feelings.

‘I sought comfort through food but obviously the more I ate, the bigger I got. It was a vicious cycle.’

By the time she was 25, Toni weighed 25 stone and was gorging on four sausage rolls and five packets of crisps a day, along with greasy takeaways.

Toni had been trying to fall pregnant with her then boyfriend, but admits she had never considered her weight as a possible factor until her GP explained the effect it was having on her fertility.

‘I hated my size but I was stuck in an endless cycle of eating,’ she said.

‘Every week, I’d gorge on three large takeaway pizzas with a side of cheesy chips.

‘I visited my GP who told me that I was struggling to get pregnant because of my weight.

‘He said that I was morbidly obese and needed to lose weight or else I was at serious risk of a heart attack or stroke.’ 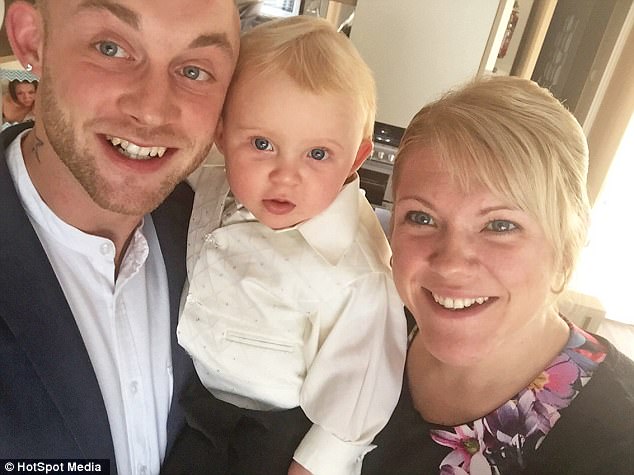 Toni with her son Harvey, who is now one, and her partner Kieron Rushton, 27, who she met on a dating app 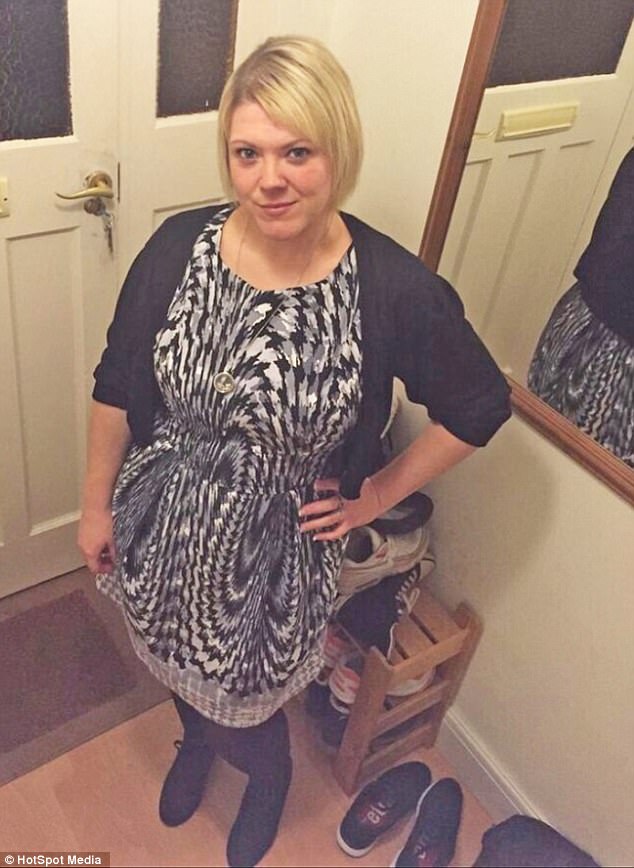 Her GP suggested that Toni have a gastric bypass operation, something which she was initally hesitant about.

‘I knew it was a huge procedure and so needed time to think about it,’ she said.

‘My doctor sent me to see a nutritionist to see if she could help me lose weight.

‘But nothing seemed to work and I continued to scoff on fatty food and get bigger.

‘I was disappointed every month when I didn’t fall pregnant.

‘I started to think that I’d never be a mum, it was awful.’

Toni continued to struggle to get pregnant and by the time she was 27, her 5ft 7in frame had ballooned to 25st 10lbs. 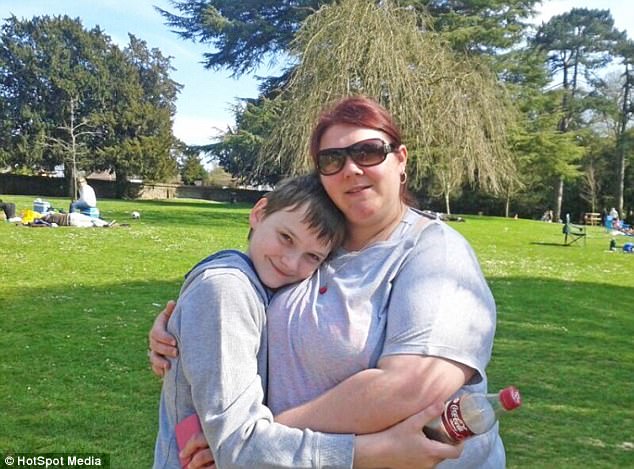 Toni, who was bullied as a child for her weight, used to eat sausage rolls, crisps, pizza and chips

She decided to have the gastric bypass operation which she underwent in March 2015, but split with her partner just a couple of weeks before the operation.

‘The stress of our infertility was draining and we just didn’t make each other happy,’ she said.

Feeling lonely, Toni decided to sign up to a dating app where she met her current partner and the father of her child, Kieron Rushton, 27, a factory operative.

In March 2015, she went in for her NHS-funded operation at Luton and Dunstable hospital.

She says: ‘Recovery was hard but before I knew it, my weight started slipping off.

‘For the first two weeks, I could only eat purified food. It was hard, but I knew it would all be worthwhile. 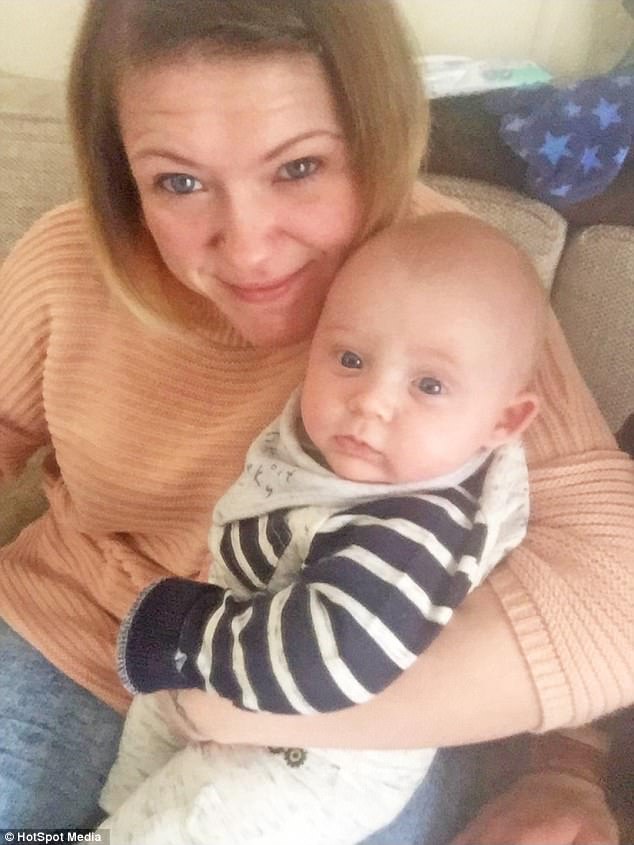 After being classed as morbidly obese at 25st, Toni swapped her diet for healthier options and finally fell pregnant with her ‘miracle baby son’

But by February 2016, Toni said she felt nauseous constantly and became worried that it was a side effect from the major surgery.

‘Suddenly it occurred to me that I might be pregnant.

‘I tried not to get my hopes up as me and Kieron hadn’t even been trying.

‘But I took a test and when I realised that it was positive, I was over the moon!’

She said: ‘Every time I look at him it makes all the hard work worthwhile.

‘I now weigh 15 stone and am a size 16. I love my new figure but more importantly, I finally have my miracle baby boy.’