Five-month-old bloodhound Shakaria gambols through the long savannah grasses of Kenya’s Maasai Mara reserve, her playful mood swiftly turning to keen determination as she is ordered to track a human scent.

Straining at the leash, she pulls her handler along an invisible scent path laid down for her until she finds a ranger hiding in the grass, pretending to be one of the poachers she is training to sniff out.

Shakaria is top of her class of five puppies being trained by American experts to join a tracker dog unit, which has become pivotal in the fight against poaching in the Mara Triangle, part of the vast Maasai Mara ecosystem in southern Kenya that merges into Tanzania’s Serengeti.

It is here that over one million wildebeest, and tens of thousands of other animals cross from Tanzania into Kenya on their annual migration, attracting hordes of tourists, but also poachers seeking an easy target.

Lema Langas, 30, a Maasai from the local community, who is warden of the canine unit, said the main challenge in the park was poaching for the commercial bushmeat trade, with dried meat exported to Uganda, Rwanda and further afield.

‘Thomson’s gazelles, impalas, giraffes, buffalos and during migration season when the wildebeest are here they become an easy target… (poachers) put down wire snares or maybe they can chase them into valleys and use machetes to cut them,’ he told AFP.

Elephants, lions and other members of the famed ‘Big Five’ also get trapped in the snares.

Rangers used to struggle to chase or spot poachers across the flat, seemingly endless grasslands, so the Mara Triangle first introduced two tracker dogs in 2009.

The unit is now comprised of four tracker dogs and two more trained specifically to sniff out ivory and guns at the entrances to the park.

‘They use their noses to see, not like us who use the eyes,’ said Langas.

‘So sometimes you are not able to see the footprint of the poachers… but when you suspect the poacher might have passed here you allow the dog to follow the scent… and you are able to retrieve that poacher at the end of the day.’

The bloodhound puppies are being trained by former police officers Linda Porter and her husband John Lutenberg, who spent decades hunting escaped convicts across the United States.

The couple trained and brought the first two dogs to Kenya in 2009, however one was so terrified by all the unusual smells that it impacted his tracking.

The new crop of puppies were born in Kenya ‘and are progressing very fast,’ Porter told AFP.

HOW ARE SCIENTISTS USING TECHNOLOGY TO THWART POACHERS?

Conservationists in Gabon have begun trying to use GPS tracking collars on elephants; tracking and drugging the animals, before attaching the high-tech gadgets in a bid to stop poachers and ivory trafficking.

Each operation needs around five to seven men, including a vet, scouts and trackers, to guide the group through dense jungle and locate the often shy animals.

Once an elephant is spotted, a vet will move forward and use a compressed air rifle to fire a dart carrying etorphine: a semi-synthetic opioid more than 1,000 times more powerful than morphine.

After the elephant is asleep on the ground, the team carry out a health check and take samples while a giant black GPS collar is fitted.

The whole process takes around 10 minutes and the team then take cover, sometimes climbing up trees, before the animal is woken up with an antidote 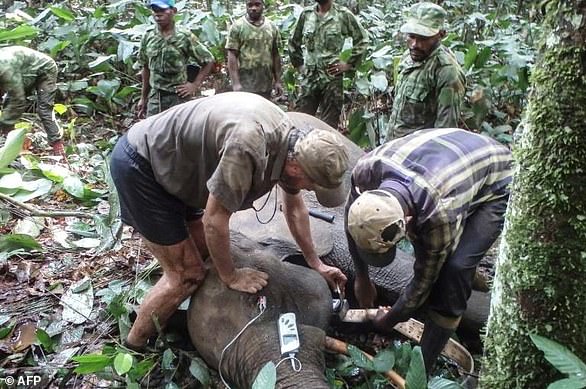 The authorities are waging virtual war on the lucrative ivory trade and the poachers who come from neighbouring Cameroon and Congo, driving deep into Gabon in militarised columns with shooters, trackers and porters

In the late nineties, the Mara Triangle, which makes up a third of the entire reserve, was crippled by rampant poaching and such bad insecurity that one ranger recalls ‘tourists being robbed, stripped and dumped on the side of the road’.

Management of the reserve was then taken over by the Mara Conservancy, a public-private partnership with the local Maasai community.

While the dog unit has greatly reduced daytime poaching, other technology such as the use of a thermal imaging camera, has helped track poachers at night.

Meanwhile, the use of community scouts and ‘private spies’ has strangled local poaching gangs on the Kenyan side of the border, and Langas says the majority of poaching now occurs on the almost invisible border between Kenya and Tanzania.

‘The conservancy is hiring the sons and daughters from this community neighbouring the park… if the community learn there is someone having a bad intention to kill an animal,’ they will come forward, he says.

A joint agreement between Kenya and Tanzania allows the rangers and their dogs to patrol deep into the Serengeti, with any poachers handed over to Tanzanian authorities.

‘We are the first line of defence from Tanzania. We prevent poachers coming into the Mara and the Kenyan side,’ said Asuka Takita, a Swahili-speaking Japanese vet, who helped start the canine unit.

During migration season, in July and August, the rangers find thousands of deadly snares set up in the park, and Langas recalls removing 511 in a single day last year.

Translating poaching arrests into convictions has long been a ‘major struggle’ in Kenya, Takita said. However since Kenya boosted its wildlife law in 2013, this has improved.

‘The fact that you are getting imprisoned for life or fined 20 million shillings ($20,000, 16,000 euros) is a deterrent. A huge amount of people — those small-scale poachers — are all deterred and that is great for us.’

Ivory poaching may garner the most attention, however a 2014 report by a government-appointed taskforce warned that bushmeat poaching was going largely ignored and had hit ‘unprecedented levels’ in Kenya.

‘This practice is unsustainable and could lead to the extermination of many species,’ said the report.