In the early hours of a Tuesday morning, exactly 25 years ago, a teenage Newcastle fan crept into his sitting-room and saw a hand-written note stuck to the television: ‘PRESS PLAY!’

David Paull was 17 years old and had just returned home after watching his team beat Leeds United 1-0 at Elland Road on April 29, 1996.

‘My dad taped the match for me,’ he says. ‘I put the TV on and, for some reason, he had the tape ready at Kevin Keegan’s post-match interview. I thought, “What’s all this about?”. 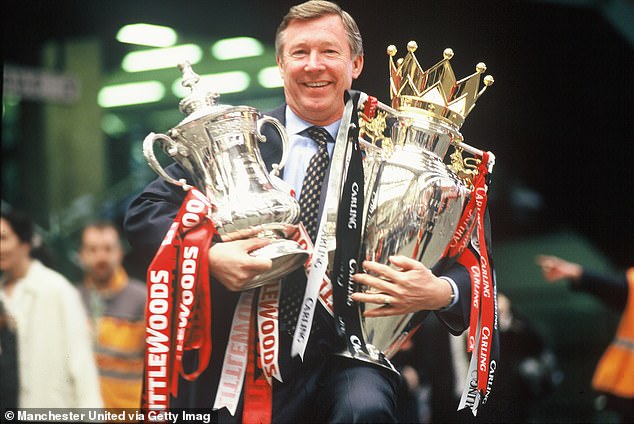 Manchester United manager Ferguson had publicly cast doubt over the application of Leeds and Nottingham Forest, Newcastle’s next opponents in the title race

‘On the bus back from Leeds no one knew anything. I pressed play and Keegan launched into his “I would love it” rant. I was punching the air — I absolutely loved it!’

The Newcastle boss had taken aim at Manchester United’s Sir Alex Ferguson (right) during an explosive outburst live on Sky Sports. Ferguson had publicly cast doubt over the application of Leeds and Nottingham Forest, Newcastle’s next opponents in the title race.

‘I’ve kept really quiet, but I’ll tell you something, he went down in my estimation when he said that,’ declared Keegan, jabbing his finger at the camera.

‘You can tell him now, if you’re watching it, we’re still fighting for this title, and he’s got to go to Middlesbrough and get something. And I’ll tell you, honestly, I will love it if we beat them, love it!’

Keith Gillespie scored the winner that night to move Newcastle within three points of United, although they were six worse off in terms of goal difference. They had a game in hand — at Forest 72 hours later — before the final round of matches on the Sunday. 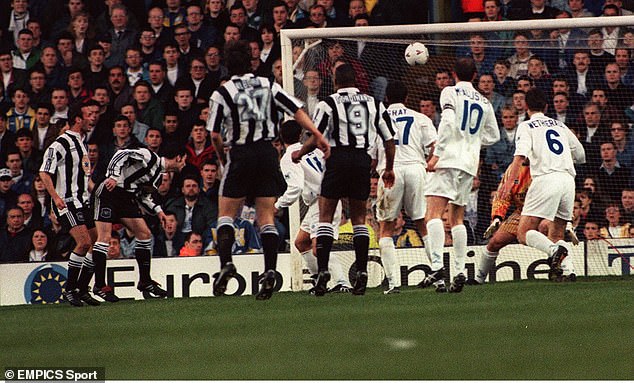 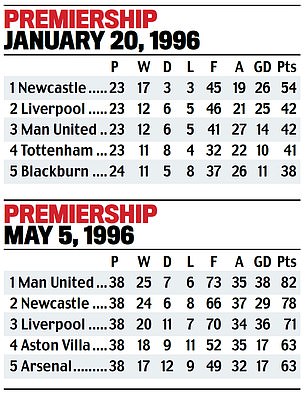 ‘I was sitting on the bus thinking the headlines would be mine,’ says Gillespie, whose first-half header had settled the game. ‘Now, no one even remembers it was me who scored!

‘We had no idea about Kevin’s rant until one of the lads, who had a mobile, spoke to his girlfriend. Word went around the bus that the gaffer had exploded on TV.

‘I only watched it the next day, and I loved his passion. We did not think he was “cracking up” at all, that was nonsense.

‘That was Kevin, he was sticking up for what he believed in. There was a lot to admire about it. People can take the p*** all they want, but it was why we loved him. All of us would have run through a brick wall for him.’

Sky presenter Richard Keys was asking the questions of Keegan from the TV studio. When he ventured: ‘That’s part and parcel of the psychological battle isn’t it, Kevin?’, his words lit a fuse. 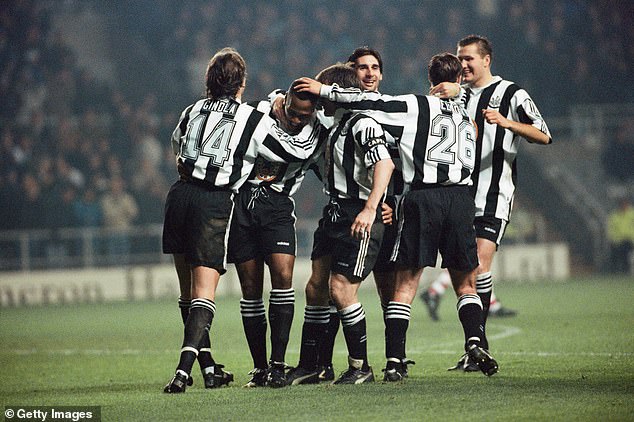 They would not go on to win the title, but the club won friends and were called entertainers

‘But we had a scary producer called Andy Melvin, and I never wanted to upset him. As the interview went on, Andy was in my ear, “Richard, leave him alone, he’s a friend of ours”.

‘Unlike today, we did not go hunting for trouble. We were an embryonic broadcaster, we were careful to protect people. I was torn, because I knew there was something there. I went back again and Kevin went off on one. I was stunned, but it was fantastic for us in the end. I even escaped a ticking off.’

Keys later spoke to Terry McDermott, Keegan’s assistant. ‘Terry Mac said that Kevin came on the bus (before doing the interview) and he was perfectly calm. He then picked up the newspaper the following morning and was like, “F***ing hell!”.

‘When you think of all the things Kevin achieved and we’re still talking about “I would love it”. I’ve apologised since for taking him down that path, but we laugh about it.’ 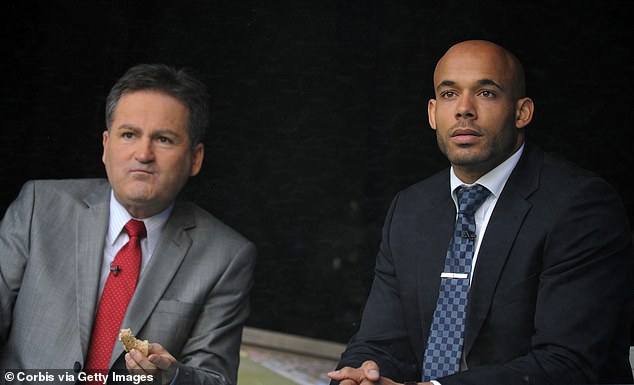 As did Keegan’s players. In the team hotel on the morning of the Forest game, David Batty said to his manager: ‘I would love some bacon, gaffer, love it.’

Newcastle drew 1-1 — as they did on the final day at home to Tottenham — and, when United won 3-0 at Boro, the title was theirs. Keegan’s side had, infamously, led the table by 12 points in January.

‘I’ve heard it said that the turning point was that interview,’ says Gillespie. ‘That’s rubbish, it was the last week of the season. The killer was losing 1-0 at home to Manchester United in March, when we battered them.

‘People say the league table never lies. Well, for me, it did that year. We were as successful as you could be without winning something. Who came second in the Premier League three years ago? I don’t actually know.

‘Twenty-five years on and we’re still the best remembered runners-up in history. That is a point of pride, not embarrassment. We were box office.’ 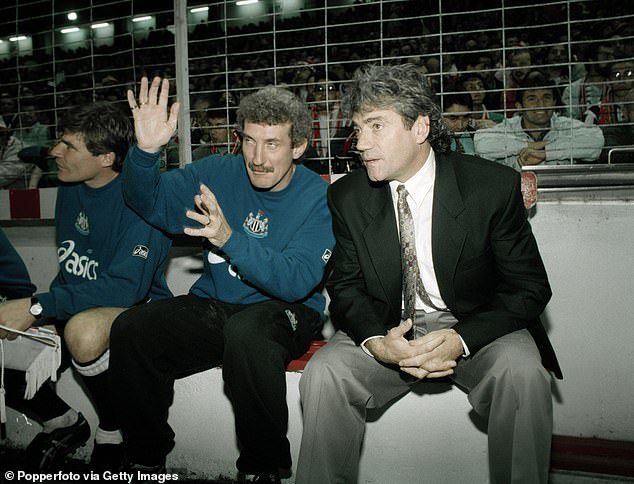 Keys agrees. ‘They were victorious in defeat,’ he says. ‘They won friends. We called them “The Entertainers” and it was a pleasure going there. Their chairman Sir John Hall used to invite us to his Wynyard Hall estate on the Saturday night and Kevin would be there. I remember the big fires burning and champagne glasses everywhere.

‘That was Newcastle — they were class, on and off the pitch. We loved them. My biggest regret from that period is that they did not win a title. They deserved it. But I don’t think Kevin would do anything differently. That gusto and bravado was the reason they were so close in the first place.’

Newcastle’s most iconic match, of course, was their 4-3 defeat at Liverpool earlier that April. Paull was on the supporters’ bus that night, too.

‘You know what, we came home on a high,’ he says. ‘We were proud. We lost but we’d just witnessed the match of a lifetime. We then got beat 2-1 at Blackburn five days later and the bus back was like a morgue, we lost the advantage that night. 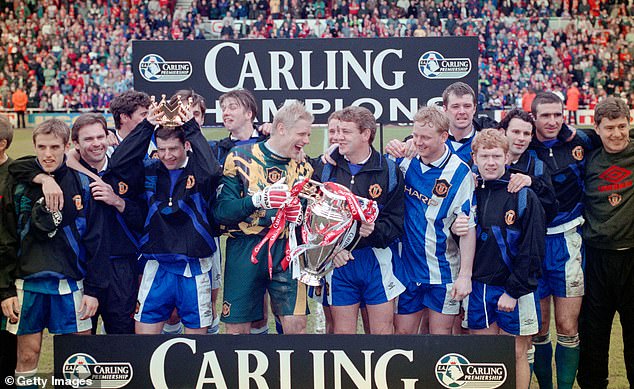 ‘But I look back with joy, not sadness. There isn’t a club in the world whose players did not win a trophy yet sell out speaking events 25 years on.

‘It’s madness. Imagine what it would be like if we’d won the league…’

Keegan, and everyone bar Ferguson, would have no doubt loved it.