Former prime minister Kevin Rudd wants Australia to double its population to 50 million to defend itself against threats from China.

Speaking at Parliament House on Tuesday for the release of journalist Peter Hartcher’s Quarterly Essay on Australia and China, Mr Rudd suggested Australia could not rely on the United States in the long-term.

‘Australia must also look to mid-century when we may increasingly have to stand to our own two feet, with or without the support of a major external ally,’ he said.

‘Trumpist isolationism may only be short term,’ he said.

‘But how these sentiments in the American body politic translate into broader American politics with future Republican and Democrat administrations remains unclear.’

The former Labor leader said the nation must plan for a ‘big and sustainable Australia’, adding it was what he advocated while in office.

‘Only a country with a population of 50 million later this century would begin to have the capacity to fund the military, security and intelligence assets necessary to defend our territorial integrity and political sovereignty long term,’ he said. 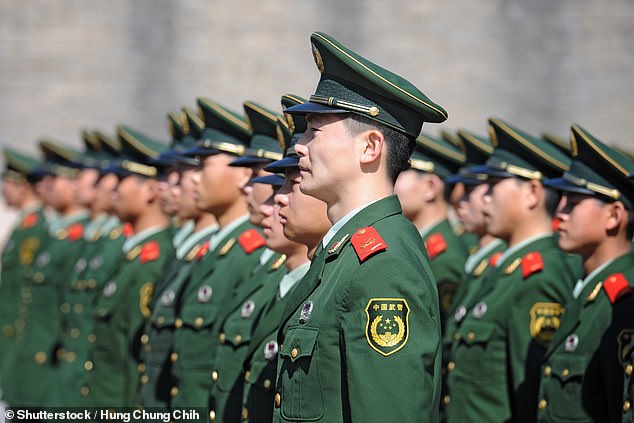 The former Labor leader said the country must plan for a ‘big and sustainable Australia’ to make sure nation can defend itself in the face of threats from China. Pictured: Chinese soldiers in Beijing

‘This is not politically correct. But it’s yet another uncomfortable truth.’

Mr Rudd, who studied Chinese language, history and politics at the Australian National University in Canberra, said he accepted the invitation to speak and share his perspectives amid ‘the current state of the fetid debate on Australia-China’.

During his time as prime minister a decade ago, communist China overtook Japan to become Australia’s biggest trading partner.

Mr Rudd concluded his speech by addressing his fears that Australia will be ‘left behind’.

‘For too long we have been complacent in anticipating and responding to the profound geo-political changes now washing over us with China’s rise,’ he said. 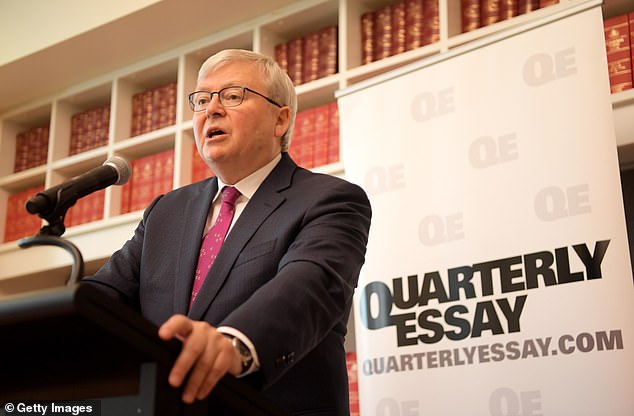 Mr Rudd said only a population of 50 million would begin to have the capacity to fund the military, security and intelligence assets later this century. Australia’s population last year surpassed the 25 million milestone – 24 years earlier than predicted in the government’s 2002 inter-generational report