Kevin Spacey’s legal woes are not over, despite the collapse of the only criminal case brought against the two-time Oscar winner since he became mired in sexual misconduct allegations.

The former House of Cards star is still being investigated in London and Los Angeles over several allegations and faces a federal lawsuit alleging he assaulted a massage therapist, Associated Press reports.

‘Just because this case may have fallen apart, that does not necessarily hamper another investigation or another prosecution,’ said Adam Citron, a former prosecutor who now works as a criminal defense attorney in New York.

Kevin Spacey’s legal woes are not over, despite the collapse of the only criminal case brought against the two-time Oscar winner since he became mired in sexual misconduct allegations 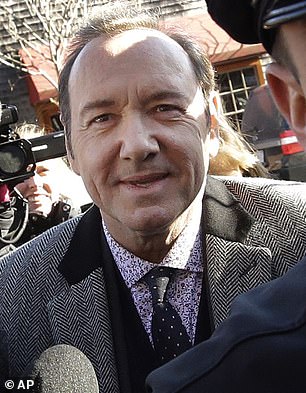 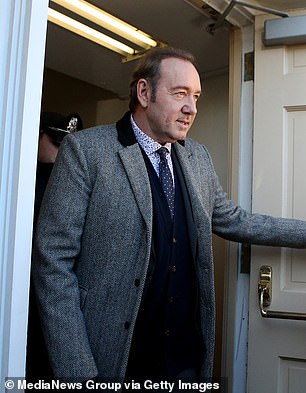 The Cape and Islands District Attorney’s office said it was no longer pursuing charges against Spacey for his alleged assault of a teenage boy. He is pictured above arriving at Nantucket District Court on January 7

Prosecutors in Massachusetts announced Wednesday that they were dropping the indecent assault and battery charge brought last year against Spacey.

The actor was accused of groping an 18-year-old man at a bar on the resort island of Nantucket in 2016.

William Little accused Spacey of reaching his hand down his pants at The Club Car in 2016 when he was 18, a claim he said could be corroborated by text messages he exchanged with an group of friends and his then-girlfriend.

Little, who worked at the establishment where the alleged incident took place, told Spacey he was 23 at the time.

It was revealed however that the texts on the accuser’s phone had been deleted by his mother prior to handing it over to authorities and that the phone itself had been lost at some point in the past year.

The case unraveled after the accuser invoked his Fifth Amendment right not to testify about text messages from the night of the alleged groping that the defense claimed were deleted.

Spacey also denied the allegations, which played a part in his dismissal from the film All the Money in the World and his Netflix series House of Cards.

Cape and Islands District Attorney Michael O’Keefe said they dropped their case against Spacey, 59, ‘due to the unavailability of the complaining witness.’ 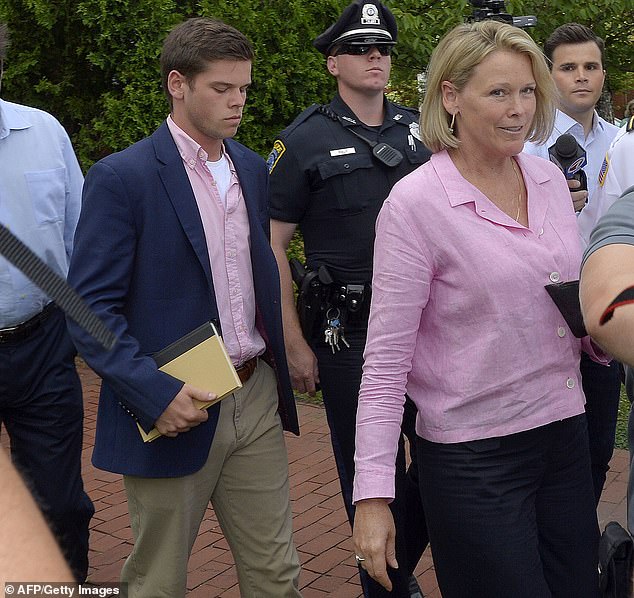 William Little accused Spacey of reaching his hand down his pants at The Club Car in 2016 when he was 18. He is pictured with his mother outside court last week

In Britain, the Metropolitan Police are investigating six claims of sexual assault and assault against Spacey, who ran London’s Old Vic Theatre between 2004 and 2015.

British police traveled to the U.S. in May to interview Spacey about sexual assault allegations, Variety reported.

Without naming Spacey, the London force told The Associated Press this month that ‘a man was voluntarily interviewed under caution in America by officers from the Met’s Complex Case Team. He was not arrested. Inquiries are ongoing.’

‘Under caution’ means the interview was recorded and can be used in future prosecutions. British police don’t identify suspects until they have been charged.

Los Angeles County prosecutors said last year that they were investigating allegations of a 2016 sexual assault by Spacey for possible criminal charges. 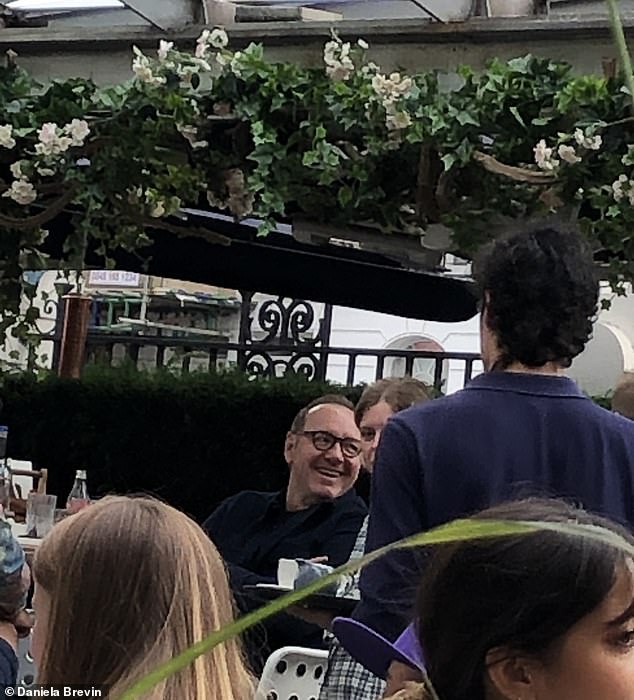 A Los Angeles County District Attorney’s Office spokeswoman confirmed Thursday that it “has a case under review,” but would not say whether it involves the same 2016 incident.

Prosecutors there declined last year to file charges over a 1992 allegation because the statute of limitations had run out.

Spacey is also fighting a federal lawsuit in California filed by a massage therapist, who says Spacey groped him, tried to kiss him and forced him to grab Spacey’s genitals.

In the Nantucket case, Spacey’s lawyers had argued that the two engaged in nothing more than ‘consensual flirtation’ and that the texts would support Spacey’s claims of innocence.

An attorney for the actor didn’t return messages Wednesday and Thursday.

The charge was dropped less than two weeks after Little voluntarily dismissed a lawsuit against Spacey because, the accuser’s lawyer said, he was emotionally overwhelmed and wanted to focus on the criminal case.

The groping allegation was first brought in 2017, days after Spacey’s first accuser, actor Anthony Rapp, said Spacey climbed on top of him on a bed when Rapp was 14 and Spacey 26.

Spacey said he did not remember such an encounter with Rapp but apologized if the allegations were true. Spacey also used the statement to disclose he is gay.

A slew of other accusations followed, leading to Spacey’s firing from House of Cards and his removal from the completed movie All the Money in the World, which was reshot with actor Christopher Plummer.