Brain functions including information absorption and concentration actually improve over the age of 50, a new study claims.

These functions are intrinsically tied to areas of cognition like decision-making, memory, and self-control, and even impact math, language, and reading skills and our sense of navigation.

‘These results are amazing, and have important consequences for how we should view aging,’ study co-author and neuroscientist Michael T. Ullman, director of Georgetown’s Brain and Language Lab, said in a statement.

In a study of 702 participants between the ages of 58 and 98, researchers at Georgetown University Medical School examined alertness, executive inhibition (the ability to block out distractions) and orienting, defined as shifting brainpower ‘to a particular location in space’

The researchers analyzed three separate components of attention and executive function in the participants: The first, ‘alerting,’ is defined as ‘a state of enhanced vigilance and preparedness in order to respond to incoming information,’ according to the release.

‘Orienting’ involved ‘shifting brain resources to a particular location in space’ and ‘executive inhibition’ refers to the ability to block out distracting information to focus on what’s important.

‘We use all three processes constantly,’ the study’s lead author, João Veríssimo, a psycholinguistics expert at the University of Lisbon, said in the statement.

‘When you are driving a car, alerting is your increased preparedness when you approach an intersection.’ 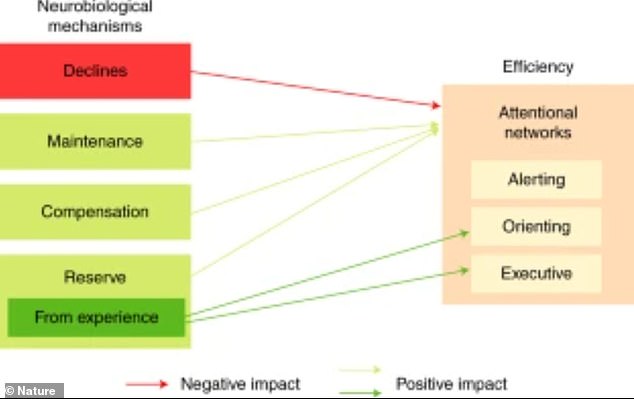 The researchers found that while attention declined, executive inhibition and orienting improved

If we shift our attention to a sudden, unexpected movement, like a pedestrian, that’s orienting, Veríssimo added.

Executive function allows drivers to tune out billboards, birds, and other drivers and keep focused on the road.

The 702 subjects in the study were all between the ages of 58 to 98, when cognition often changes the most.

The researchers found that only alerting abilities declined with age, while both orienting and executive inhibition actually improved.

‘Because of the relatively large number of participants, and because we ruled out numerous alternative explanations, the findings should be reliable and so may apply quite broadly,’ Veríssimo explained. 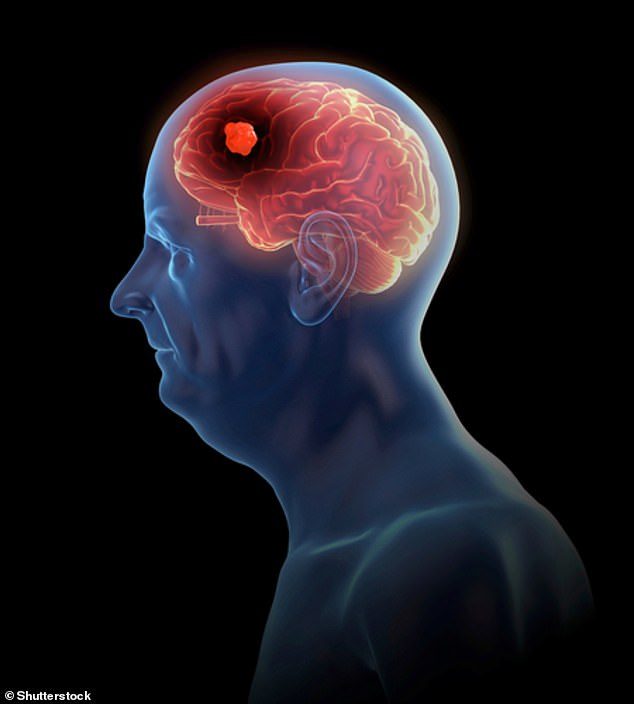 According to the authors, orienting and executive inhibition can be honed with practice, while alertness, which showed steady decline across the participants, can’t

He and Ullman theorize executive function and orienting continue to improve because they involve selective attention and can be honed with practice.

They found the gains from this practice ‘can be large enough to outweigh the underlying neural declines,’ according to the release.

Alerting declines because this ‘basic state of vigilance and preparedness’ can’t cannot improve with practice..

‘People have widely assumed that attention and executive functions decline with age, despite intriguing hints from some smaller-scale studies that raised questions about these assumptions,’ Ullman said in a statement.

‘But the results from our large study indicate that critical elements of these abilities actually improve during aging, likely because we simply practice these skills throughout our life.’

The study is particularly relevant as the world faces an increasing aging population.

The US Census Bureau predicts that, by 2035, there will be 77 million Americans 65 and older, outnumbering the 76.5 million children ages 18 and under. 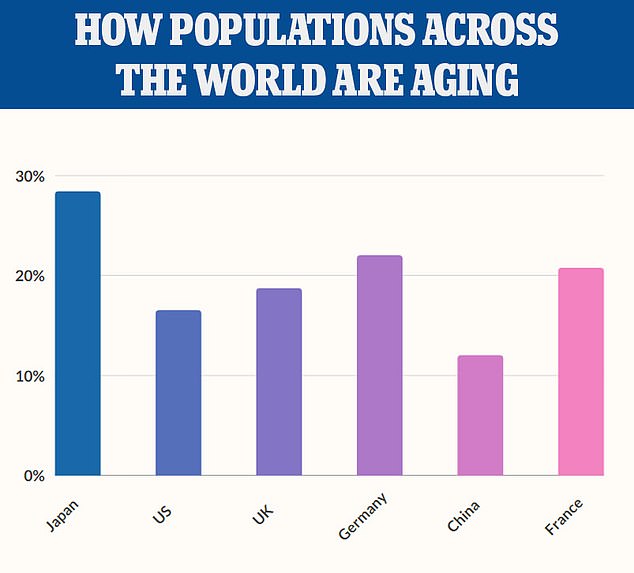 More than one in four people in Japan is over 65, with seniors making up more than 20 percent of the population in France and Germany

Germany, Italy, France, Spain and other European countries already have older populations, while in Japan, considered a super-aged society, more than one in four people are 65 or older.

With more research, Ullman said, specific activities and exercises could be developed to further improve orienting and executive inhibition as a bulwark against dementia and other forms of decline.

‘The findings not only change our view of how aging affects the mind, but may also lead to clinical improvements, including for patients with aging disorders such as Alzheimer’s disease,’ Ullman said.

The study was recently published in the journal Nature Human Behavior.