Introducing the NUG-A-LOT burger: The new $8.95 secret menu item at KFC revealed – and how you can find the hidden snack for yourself

The restaurant unveiled the never-before-seen burger called ‘The Nug-A-Lot’, retailed at $8.95, to the ‘Secret Menu’, available in-stores.

The new $3.95 ‘Kentucky Slider’ comes complete with the Original Tender, coleslaw, cheese, bacon, and barbecue sauce – all wrapped up in a fluffy flatbread tortilla. 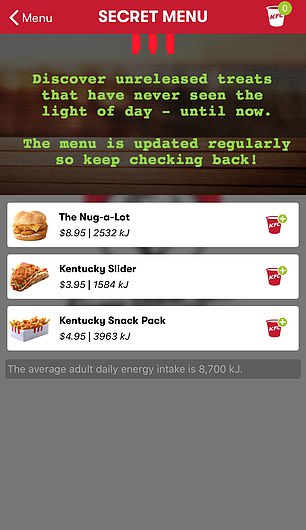 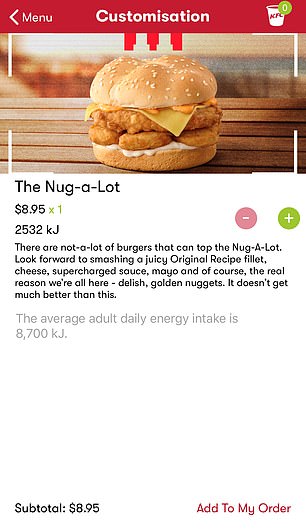 The new $3.95 ‘Kentucky Slider’ comes complete with the Original Tender, coleslaw, cheese, bacon, and barbecue sauce – all wrapped up in a fluffy flatbread tortilla

2. Navigate to the Order screen with the food categories (you will need to select a store first)

3. Scroll down until the Colonel appears

4. Hold for 11 seconds until the Secret Menu pops up

In April, KFC released ‘The Kentucky Snack Pack’, retailed at $4.95, to the ‘Secret Menu’.

The meal includes the famous golden fries, topped with its iconic Popcorn Chicken and drizzled with fiery supercharged sauce to give you a spicy kick.

To make the purchase you need to download the app, select your nearest store, tap ‘order’ and when the menu appears, drag the screen down.

As cartoon Colonel Sanders appears, hold the screen for 11 seconds until the ‘Secret Menu’ pops up.

‘It didn’t take long for fans to discover our Secret Menu, and we’re excited to give the country a sneak peek of the next item, the Kentucky Snack Pack,’ KFC Australia’s chief marketing officer Kristi Woolrych previously  said.

‘Like The Colonel, we want to keep the rest of the items a secret, so you’ll need to keep your eyes peeled with new items are added every month so stay tuned.’

The products on the Secret Menu were designed by the chain’s team members as part of an internal competition.

‘After all, no one knows KFC better than our people! The best ideas were chosen to become part of KFC’s Secret Menu to be rolled out over the next year on the KFC app,’ the chain said.

The product on the menu will change every month – so dedicated diners are encouraged to keep checking back on the app.

‘Discover unreleased treats that have never seen the light of day – until now. I update the menu regularly so keep checking back,’ the menu description reads. 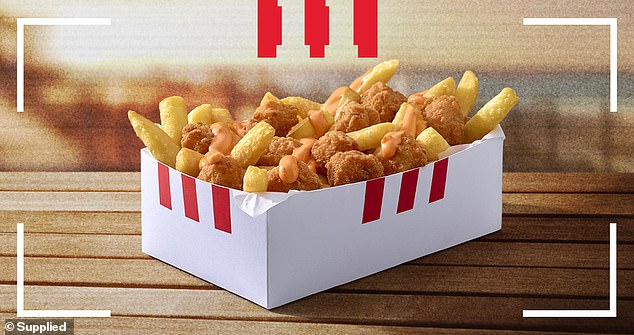 In April, KFC released the $4.95 ‘Kentucky Snack Pack’ to the ‘Secret Menu’

What is on the KFC secret menu? 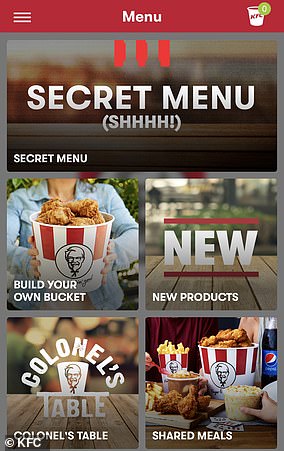 Did you know? KFC has a ‘Secret Menu’ with never-before-seen meals on its app

There are not-a-lot of burgers that can top the Nug-A-Lot. Look forward to smashing a juicy Original Recipe Fillet, cheese, supercharged sauce, mayo and of course, the real reason we’re all here – delish, golden nuggets. It doesn’t get much better than this.

OK just in case the name didn’t give it away, it’s your fave Kentucky… but as a Slider. That’s a juicy Original Tender, coleslaw, cheese, bacon and BBQ sauce all wrapped up in a fluffy flatbread tortilla.

This is the other item added to the Secret Menu. The snack pack includes golden chippies, topped with Popcorn Chicken and drizzled with fiery supercharged sauce.

A KFC spokesperson told Daily Mail Australia earlier this year: ‘As you know, The Colonel is famous for his secrets including his 11 herbs and spices, but yes we can confirm there’s a secret menu within the KFC app.

‘It’s a secret menu for a reason, so we encourage Aussies to download the KFC app and get scouring. There’s a bunch of clues hidden in the website, app and on Facebook which will help uncover these never seen before KFC products.

‘The Colonel has more to reveal in the coming weeks, so keep your eyes peeled.’

The KFC Secret Menu will be available at all participating stores Australia-wide for the remainder of 2019.