Khan challenged on Corbyn and Uber in radio show

Sadiq Khan was left red-faced today after he was confronted by a caller over his part in the failed Labour leadership coup as he conducted a live phone-in with Jeremy Corbyn.

The London Mayor had thrown his support behind Owen Smith in the doomed bid to oust Mr Corbyn from the top job.

During the bitter campaign Mr Khan tore into the leftwinger saying he was ‘unable to organise an effective team’ and failed to show leadership in the referendum campaign.

But he has scrambled to backtrack on his earlier criticism after the coup flopped and Mr Corbyn strengthened his grip on the party following election.

Mr Khan was  hosting a live phone-in show on LBC when he was ambushed over his U-turn by a caller who quoted his words to him and asked if he now think he was ‘wrong’ as he conducted a half-hour segment with Mr Corbyn.

It came after the London Mayor had earlier cut off a caller who accused him of being ‘dishonest’ in his role over Uber.

Sadiq Khan, pictured at LBC today, had a series of awkward encounters as he hosted a live radio phone-in show today

In an awkward encounter, Barry from Orpington confronted the mayor over his uneasy truce with his party leader during the phone-in on LBC.

He said: ‘Mr Mayor, I just wanted to ask you – who was it who said ‘Jeremy has already proved that he is unable to organise an effective team and has failed to win the trust and respect of the British people.

‘Throughout this referendum campaign and the aftermath Jeremy failed to show the leadership we desperately needed, his position on EU membership was never clear and voters didn’t believe him.’

The caller added: ‘Mr Mayor were you wrong to say this? Do you believe Jeremy on his promise to end student debt and renew Trident?’

Mr Khan scrambled to try to play down any suggestion there was still a rift between him and Mr Corbyn, who say just yards away in the radio studio. 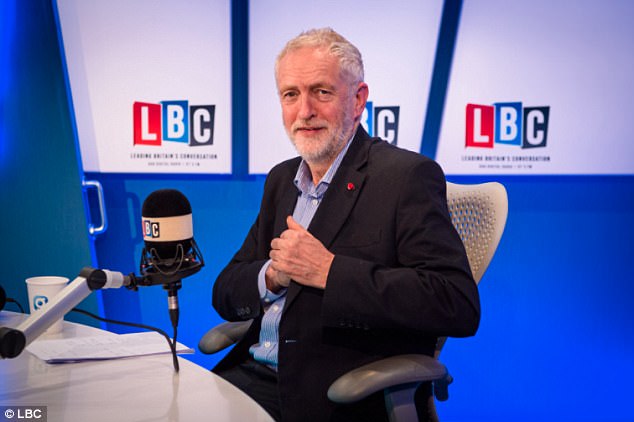 Jeremy Corbyn appeared on the lie phone in show. A caller confronted Mr Khan about his past scathing criticisms of the Labour leader as Mr Corbyn sat across from him

Mr Khan said: ‘I’m going to deal with this directly – we had a leadership contest in our party and Owen Smith stood against Jeremy.

‘And the magnanimity of Jeremy when he defeated Owen was to pugt him I his shadow Cabinet.

‘And Jeremy is not the first Labour leader to give jobs to candidates who stand against him.

‘Nor is he he first labour leader who stands in an election, wins it and brings on board his team.’

He added: ‘If you can’t have a frank discussion during a leadership contest –which is something the Tories didn’t do – then when can you have a discussion about the polices of each candidate?’

Mr Corbyn remained tight-lipped about what he thought about the mayors past comments, but defended his role in the EU referendum campaign.

He said: ‘I led our party during the EU referendum campaign on a policy of remain and reform.

‘I believe the EU needs reforming, needs quite a lot of fundamental change, but I did say we should remain.’

Earlier in the show Mr Khan had also faced a grilling from another caller who challenged him about his views on Uber.

It comes after the car hailing app had its licence in London formally revoked following claims it had not properly reported allegations of sex attacks to police.

But the revocations has not formally kicked in and an appeal is under way.

One caller, Hannad from Tower Hamlets, asked: ‘What I want to ask is why you say that you use Uber when you were campaigning to be Mayor, and then said that you’d never used them when you revoked their licence?

‘I mean, isn’t that dishonest?’

But Mr Khan reprimanded the caller for not staying in the topic of Brexit before cutting him off .

He said: ‘Thank you for that relevant question about the EU, let me answer that question directly – I don’t know what you’re talking about, mate.’