The 34-year-old beauty found out that the NBA player had gotten intimate with Kylie Jenner’s best friend Jordyn Woods at a house party on Sunday, according to a Tuesday report from TMZ.

‘Tristan and Jordyn were all over each other making out,’ a source told the site.

On Tuesday morning Thompson tweeted that the report was ‘fake news.’

Hot stuff: Woods, seen over the weekend, has lost a lot of weight in the past year 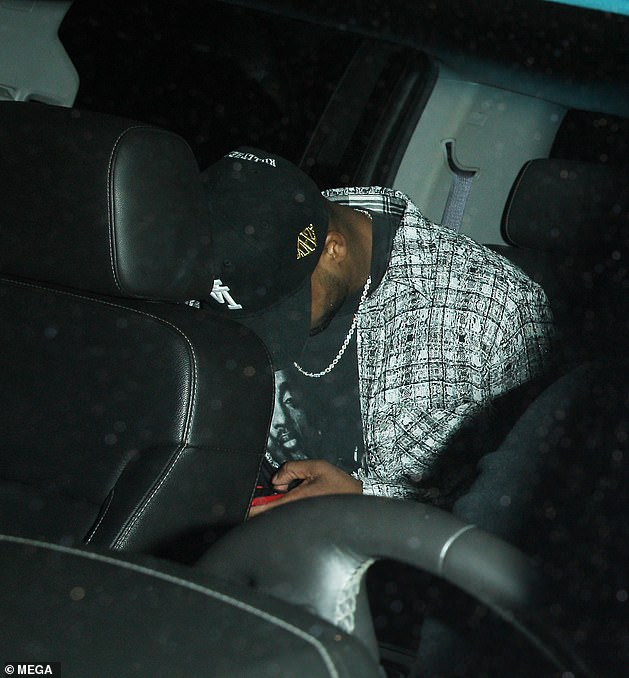 Night out: And in the early hours of Sunday morning, Tristan was snapped hunkering down in the back of a luxury vehicle after reportedly spending several hours with Woods at Delilah

It is not known where the house party was or who else was there at the party.

DailyMail.com has reached out to reps for both Khloe and Jordyn.

Khloe, who has baby True Thompson with Tristan, reportedly found out about the hookup and told the Cleveland Cavaliers player they are done for good. 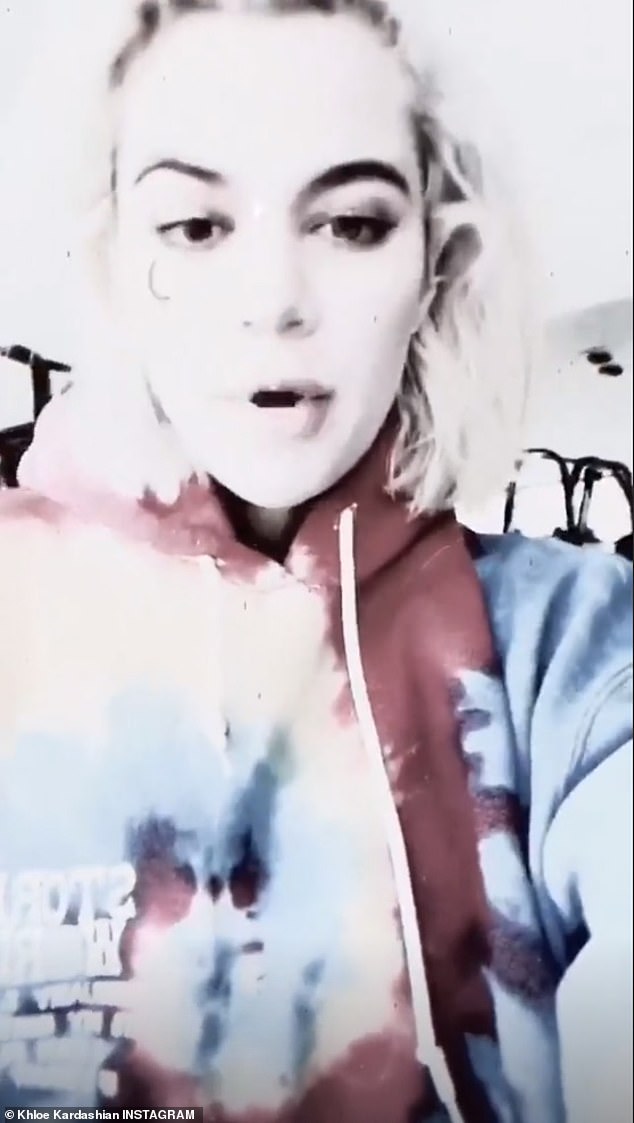 Staying calm: Khloe shared this clip to Instagram Stories on Tuesday morning while at the gym with Kourtney 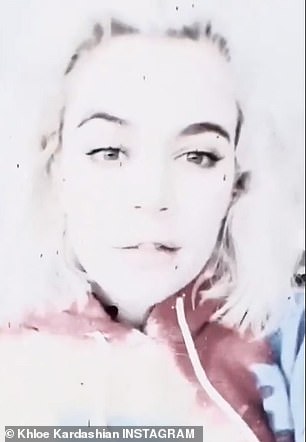 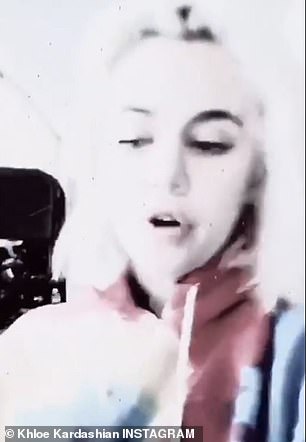 New life: The star stuck to talk about working out and her post baby body. The mogul did not address her split from Thompson during the clip 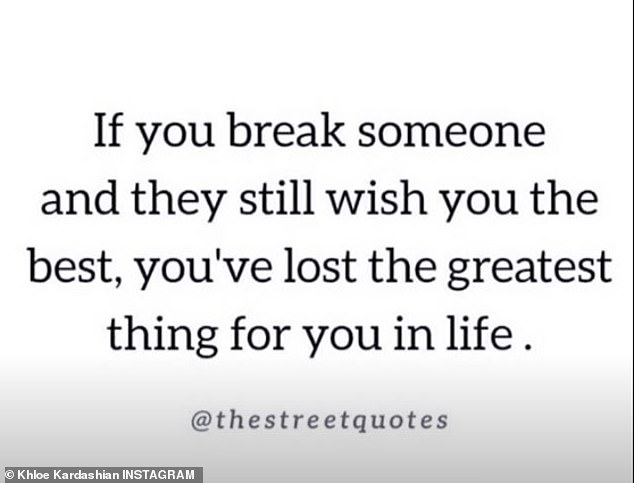 More cryptic quotes: The daughter of Kris Jenner shared this note which read, ‘If you break someone and they still wish you the best, you’ve lost the greatest thing for you in life’ 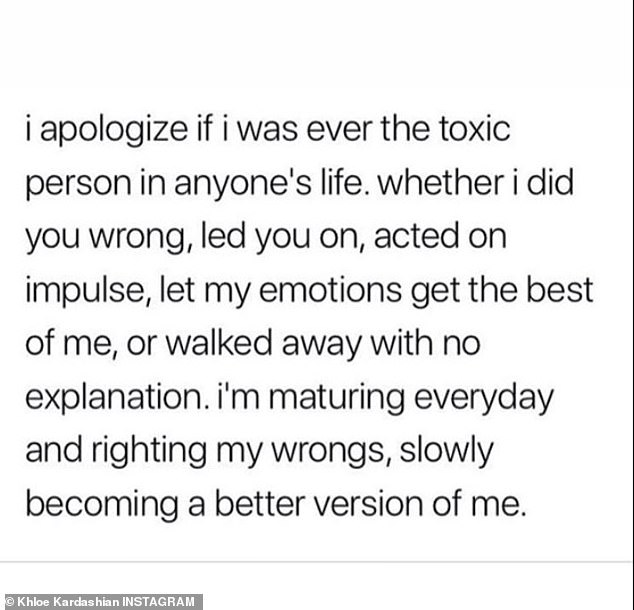 It makes sense but doesn’t make sense: The blonde also said that she was sorry if she was ever toxic or led someone on

And it appears the the entire Kardashian family has unfollowed Woods.

Thompson had flown into town from Ohio to spend Valentine’s Day with Khloe and True.

They were seemingly very much together before the alleged cheating incident.

The TV star shared images of the flowers he had sent her to celebrate their union and she noted how sweet Tristan was for the gifts. 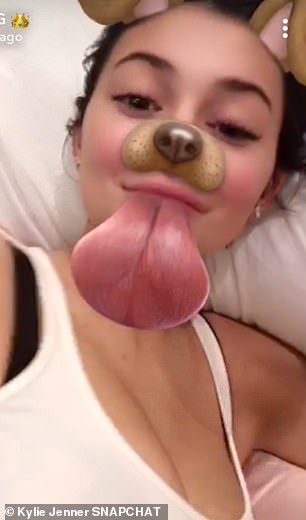 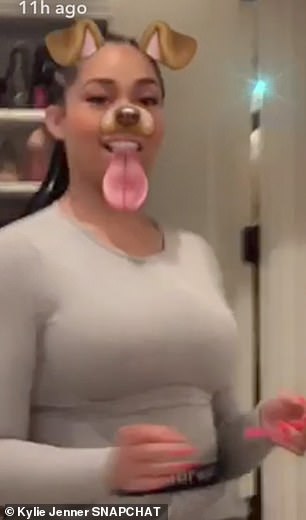 Still pals? Oddly, Kylie and Jordyn were seen together in a video shared to Snapchat on Monday evening

Kylie has been friends with Jordyn since childhood. They co-starred on The Life Of Kylie together and even started a beauty line this year.

Oddly, Kylie and Jordyn were seen together in a video shared to Snapchat on Monday evening.

They seemed to be on great terms as they used filters on their faces and laughed. 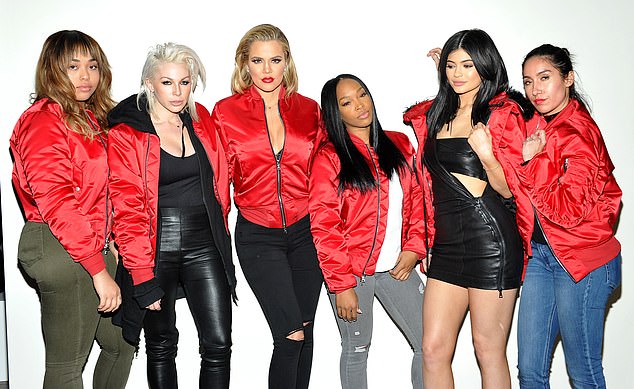 They were pals: Khloe included Jordyn, far right, in her group of pals. Also seen here are Joyce Bonelli, Malika Haqq and Jen Atkin in 2016 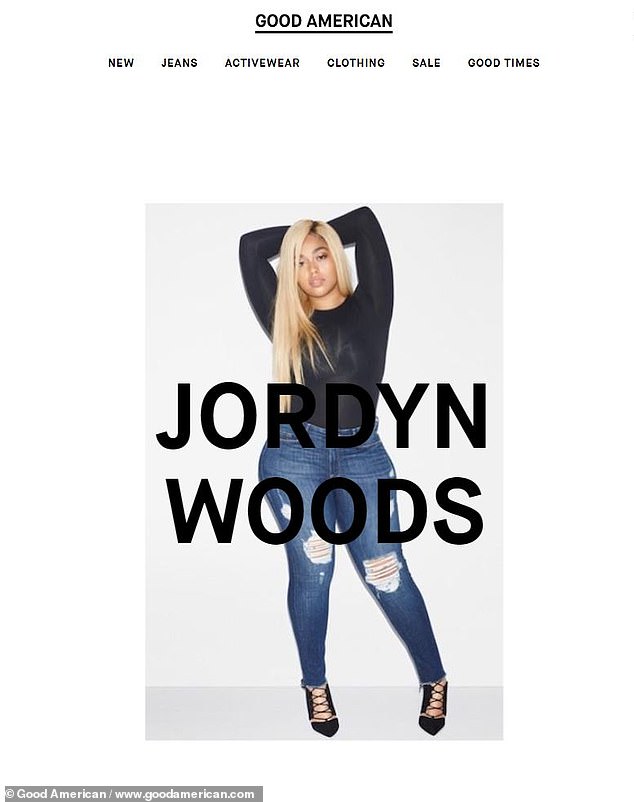 Nice friend: The siren also cast Woods as a model for her Good American jeans 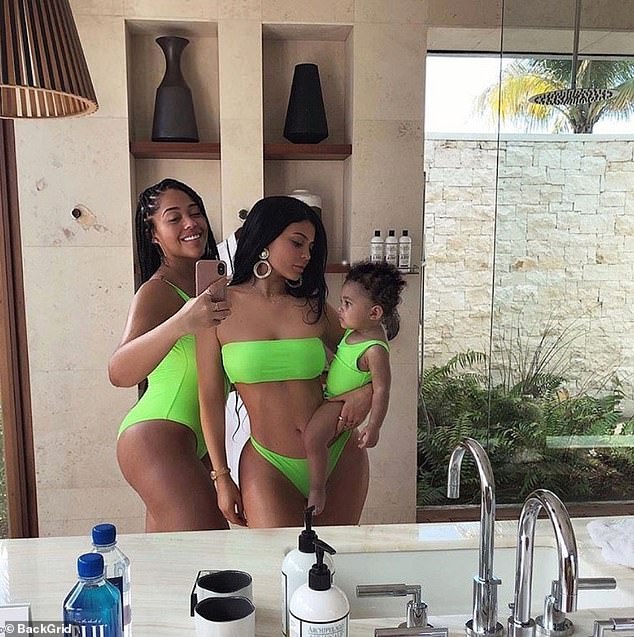 They are very close: Woods goes everywhere with Jenner; here they are seen last month on vacation with Stormi 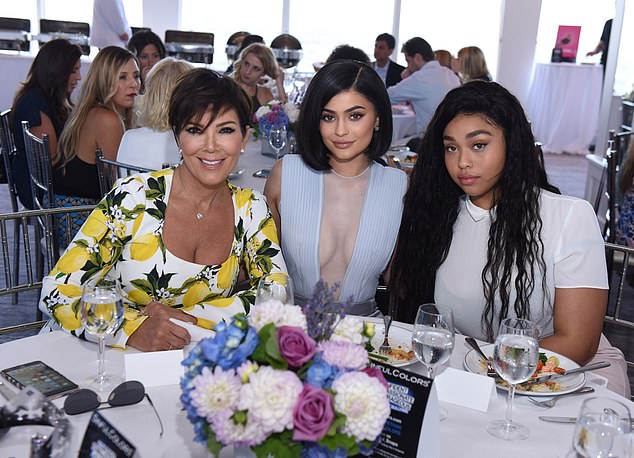 She is deep into the Kardashian/Jenner nest: Woods, far right, with Kylie, center, and mama bear Kris, 63, in 2016

Kylie must have known about Woods’ alleged involvement with Thompson at that point and it seems unusual she would be fine spending time with the friend.

Either that or the video is older and was recycled accidentally.

Khloe has also been a good friend to Jordyn as she cast her as a model in her Good American campaign.

If the claim from TMZ is true, the love triangle will no doubt be used during season 16 of Keeping Up With The Kardashians, which debuts in late March.

On Tuesday morning Khloe was seen at the gym with Kourtney.

The daughter of Kris Jenner shared a note to social media which read, ‘If you break someone and they still wish you the best, you’ve lost the greatest thing for you in life.’

It has been speculated for months that Khloe and Tristan may be over because they do not spend much time together. 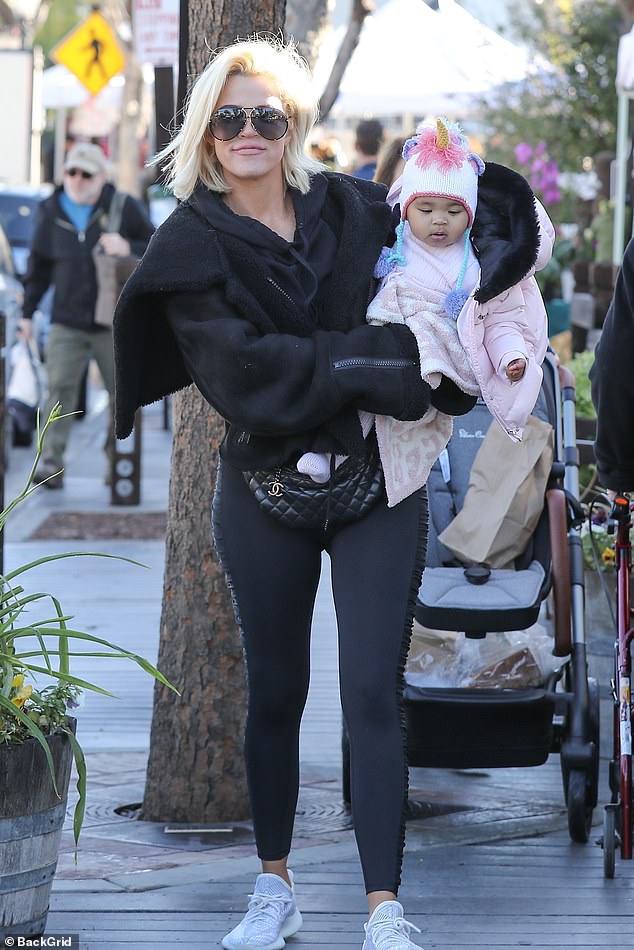 Single mom: The reports come amid rumors his relationship with Kardashian, 34, is over, 10 months after the birth of their daughter True, pictured Saturday in Calabasas

And it seems they never got back to normal after it was reported by DailyMail.com in April that he had cheated on her with a club employee.

This new report does not come as a surprise as in recent weeks there have been reports that he has been checking out other women.

Earlier this week Life & Style claimed that Thompson had strayed by ‘being flirty, hitting up girls’ at the Pineapple Hill Saloon & Grill in the LA suburb of Sherman Oaks on Valentine’s Day.

As far as his straying, the publication also claimed he was seen dining with two male pals at Gyu-Kaku restaurant in the same neighborhood.

‘They probably play basketball too because they were really tall. He was calm and casual,’ the onlooker said.

Before flying to Los Angeles from Ohio, Tristan had been spotted at a bar in Cleveland on February 9, where, according to UsWeekly, ‘he came in the back door and he was snuck quickly through the back by two or three bouncers.

‘They took him immediately upstairs,’ the source reported. ‘There were some girls who went up afterward.’

The latest reports come amid rumors that his relationship with reality star Khloe is over, 10 months after the birth of their daughter. 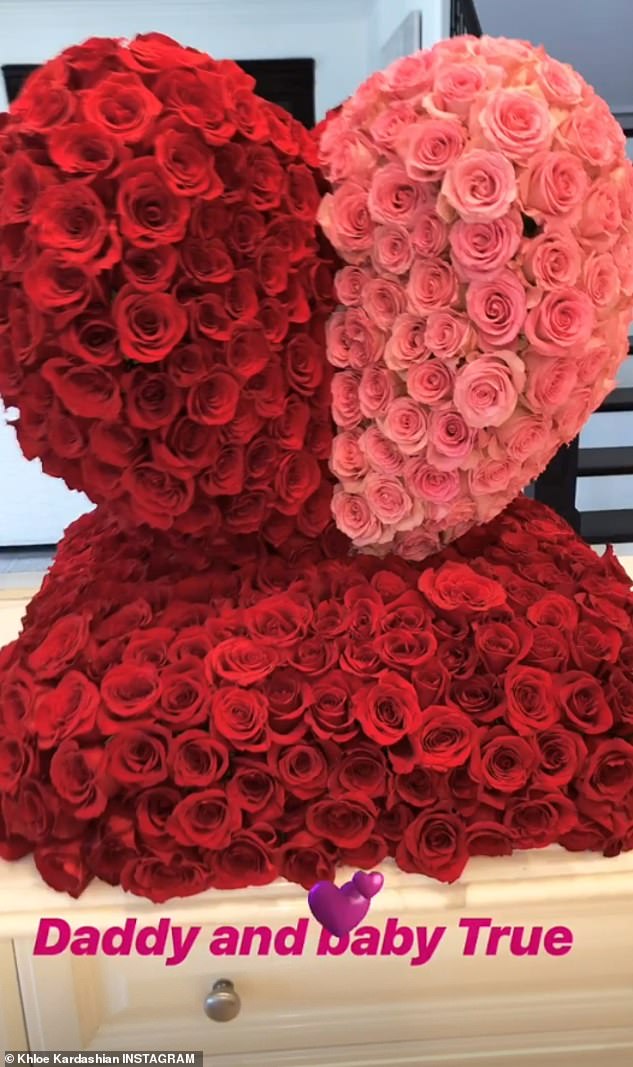 Red roses: On Thursday, Khloe had shown off the huge heart-shaped floral arrangement the NBA pro had sent her and True on Valentine’s Day 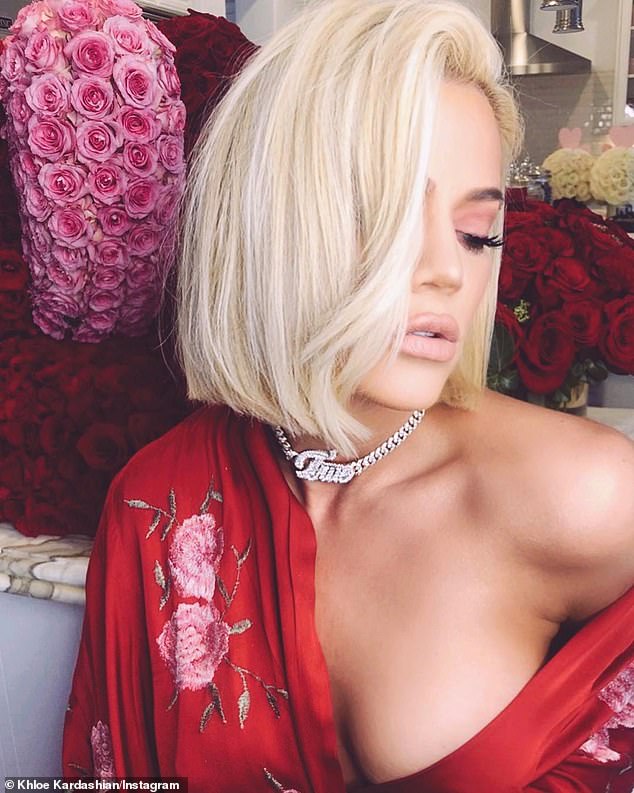 Reality star: But Khloe’s also been posting quotes about heartbreak along with photos of her baby girl as well as debuting a new shorter platinum blonde bob

Tristan and Khloe’s relationship was overshadowed by a cheating scandal in the days before their baby’s birth.

Dailymail.com was the first to report that Tristan had been caught with another woman in April 2018.

In recent days, the reality star has been posting quotes about heartbreak along with doting photos of her baby girl as well as debuting a new shorter platinum blonde bob.

‘Shout out to every woman who is trying to heal from things they can’t talk about,’ she posted February 15. ‘Sometimes God breaks your heart to save your soul.’

Before he hooked up with Khloe, Tristan dated Jordan Craig with whom he shares son Prince who turned two in December. 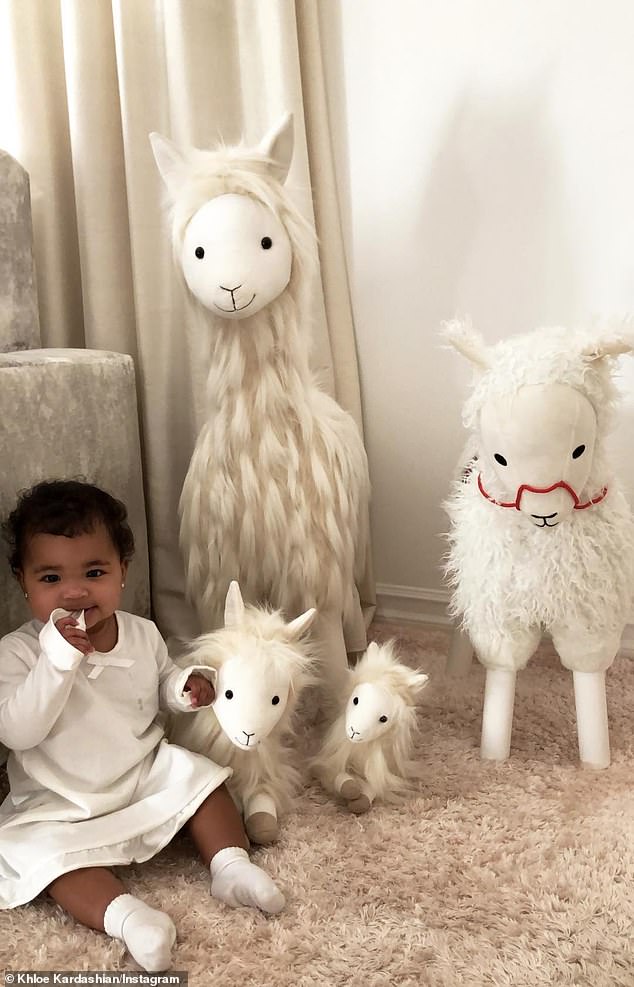 The love of her life: Khloe also recently shared this sweet image of True at home