Kids of couple freed in Pakistan pictured playing at home

Touching new photos show the three young children born in Taliban captivity being cuddled by their grandparents and readjusting to their new lives in Canada after their family’s traumatic ordeal.

The children of Joshua Boyle and his wife, Caitlan Coleman, who returned home to North America after it was claimed they were freed by Pakistani forces following a five-year hostage ordeal in Afghanistan, are seen acclimating to life back in the West.

Joshua Boyle, a Canadian national, and his wife, Coleman, an American citizen, were repatriated back to Canada last week after Pakistani officials claimed their military freed them from the Taliban-affiliated Haqqani network in Pakistan.

Coleman was rushed to hospital earlier this week for an undisclosed medical emergency.

Her husband Joshua Boyle shared a photograph of his wife on Tuesday morning, seven days after their five years of captivity came to an end.

Patrick Boyle holds his granddaughter, Grace, at his home in Smiths Falls, Ontario. Grace was born into Taliban captivity, though it’s unclear if she was born in Afghanistan or Pakistan 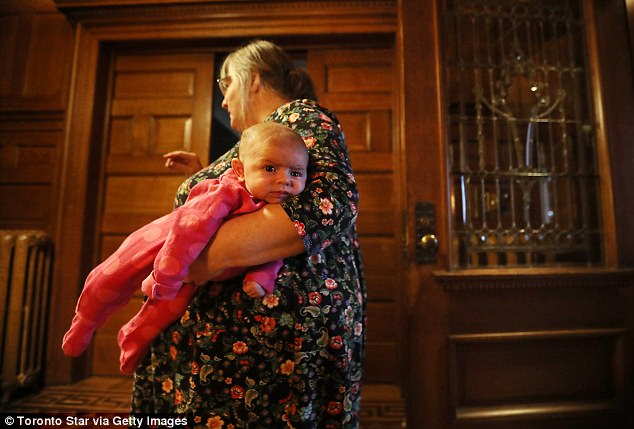 Linda Boyle also got a chance to hold her granddaughter, Grace, after her son, Joshua Boyle, and his American wife, Caitlan Coleman, were freedom after five years in captivity 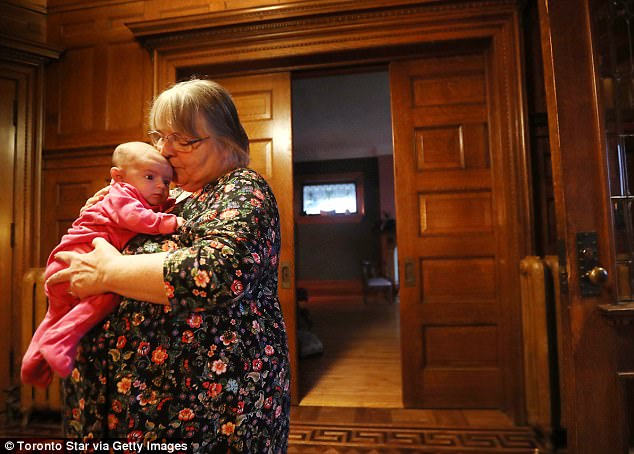 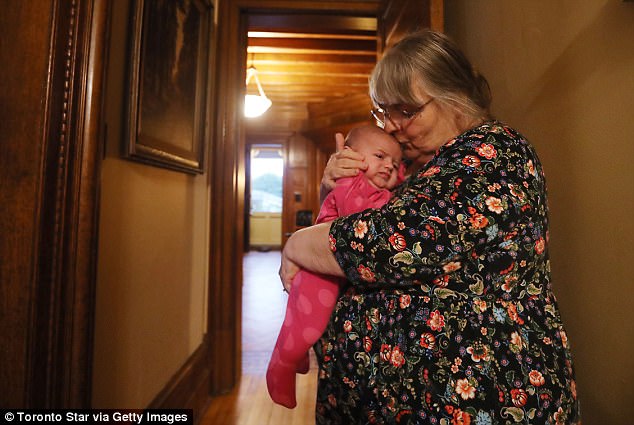 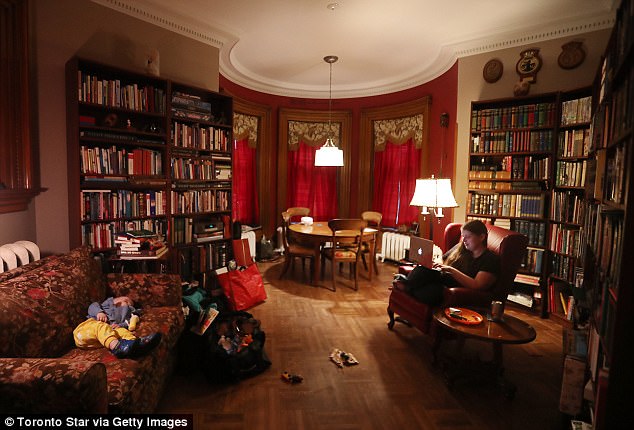 Jonah’s brother, Noah Boyle, takes a nap in the family library as his aunt, Heather Boyle, works on her laptop 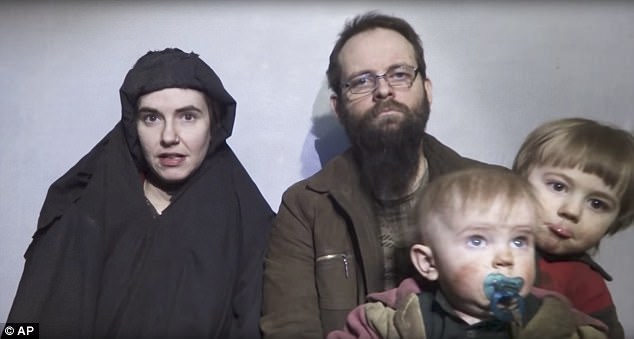 The Toronto Star photos are the first glimpse the public has of Grace. The couple gave birth to all three children while in captivity. They are seen above in a video released by the Taliban in December 2016

The image shows a conscious Coleman in bed with one of her three young children – who were all born while the couple was held by Taliban-linked militants.

‘My wife has been through hell, and she has to be my first priority right now,’ Boyle said in an email to the Associated Press.

In the image Coleman is still wearing a veil while her husband and children have been pictured in Western clothing since their return to Ontario on Saturday.

The couple previously revealed Coleman was raped by a guard during their ordeal and their fourth child – a girl – was killed in a ‘forced abortion’ by the Haqqani militants. 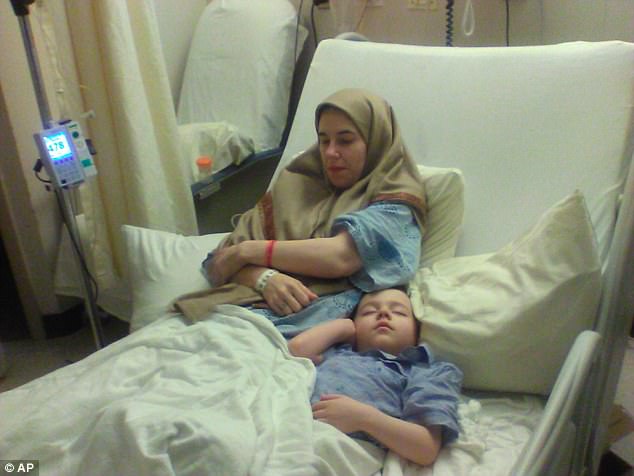 Joshua Boyle’s wife, Caitlan Coleman, sits with their son Najaeshi at a hospital on Wednesday in Ontario. Coleman was rushed to the hospital on Monday night 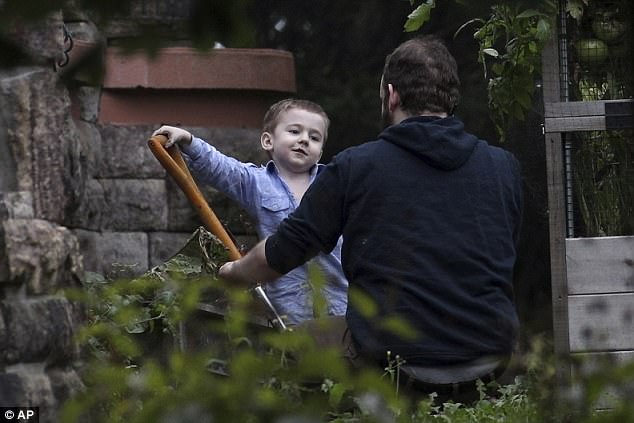 Boyle said his eldest son Najaeshi is ‘exuberant; honestly freedom seems to have cured half his ills instantly, he’s running around examining all the gifts compiled over the years’ 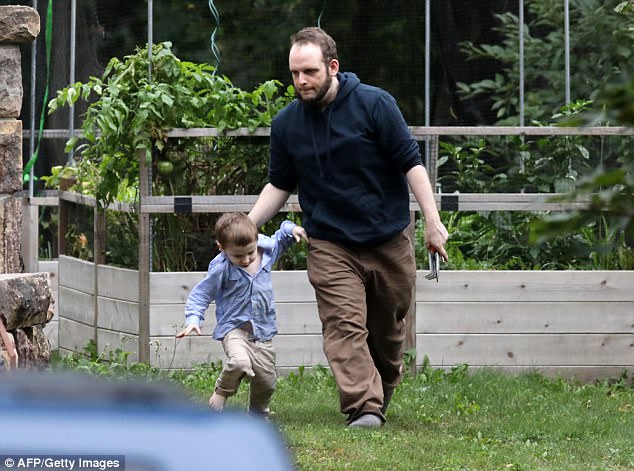 ‘Everything in the house is a wonderland to him,’ Boyle said of the boy born in captivity 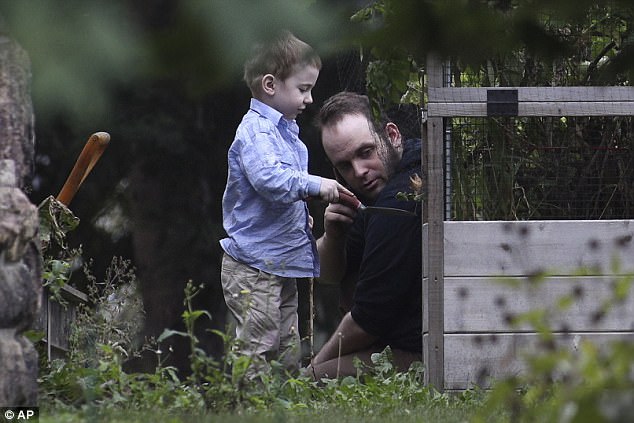 Boyle is seen playing with his son Najaeshi Jonah in the garden of his parents’ home in Smiths Falls, Ontario on Saturday. Boyle, his wife and their three kids were freed on Wednesday

But a Taliban spokesman rejected Boyle’s claim that his wife was raped and one of their children killed by members of the group.

The photos of the children published this week were arranged by The Toronto Star newspaper.

Noah is seen sleeping in the library at his grandparents’ home in Smiths Falls, Ontario, which is about an hour drive from the Canadian capital of Ottawa.

Noah’s sister, Grace, is seen being lovingly held in the arms of her grandfather, Patrick Boyle.

Grace also gets to spend quality time with her grandmother, Linda, who is seen holding the toddler in one arm.

The photos are the first time that the public has gotten a glimpse of Grace.

In another photo, young Jonah Boyle is see peering out from a pocket door as a photographer snaps a photograph of the adorable boy.

The Haqqani group is an Afghan fundamentalist guerrilla organization that is considered a terrorist organization by the US State Department.

It is believed to be active in the largely lawless tribal regions that straddle the border between Afghanistan and Pakistan.

The head of the CIA, Mike Pompeo, expressed the belief among government officials in both the US and Canada that the family was not freed in a daring raid in Afghanistan, but that the release was coordinated and staged in Pakistan.

Pompeo said Thursday that American officials believe the family was held for five years inside Pakistan before their release last week. 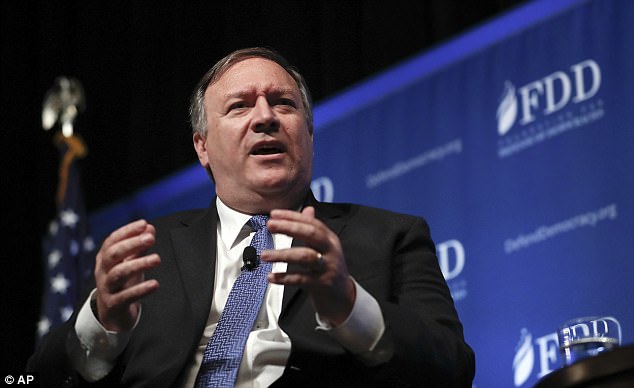 CIA Director Mike Pompeo expressed the belief among government officials in both the US and Canada that the family was not freed in a daring raid in Afghanistan, but that the release was coordinated and staged in Pakistan. Pompeo is seen above in Washington on Thursday

The account is at odds with the Pakistani military’s version of events, which said it rescued the couple and their three children born in custody after a tip-off that the family had been moved into Pakistan’s semi-autonomous tribal areas from across the border in Afghanistan, where they were captured in 2012.

‘We had a great outcome last week, when we were able to get back four US citizens, who had been held for five years inside of Pakistan,’ Pompeo told a Washington policy forum.

The amount of time Coleman and Boyle spent on either side of the lawless Afghan-Pakistan border is significant for US authorities.

Washington suspects Pakistan of collusion with the Haqqani group, a hardline Taliban faction that targets the US-backed government in Kabul and is thought to have held the hostages.

Pakistani officials secured the family’s release last week, just ahead of a key visit next week by Secretary of State Rex Tillerson during which he is expected to pressure Islamabad.

Some US and Canadian officials have cast doubt on whether the family was rescued, hinting in North American media that the recovery was more of a ‘negotiated handover.’ 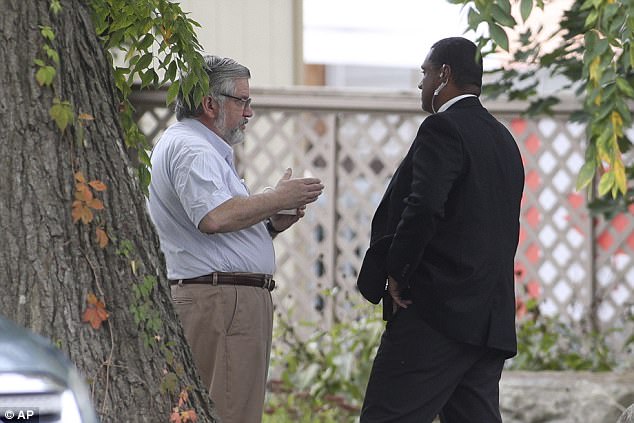 Patrick Boyle, left, the father of Joshua Boyle, speaks with security outside his house in Smiths Falls last week 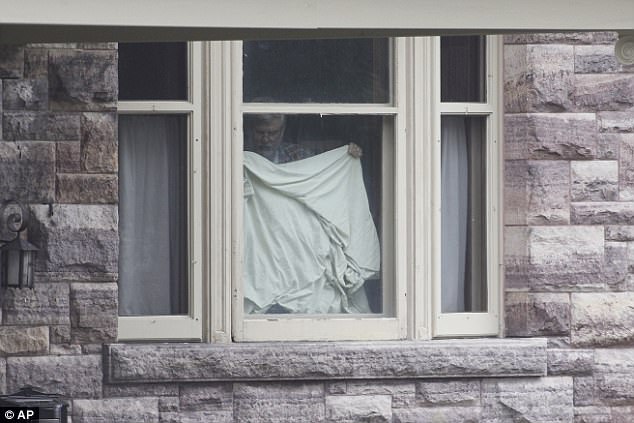 ‘I think history would indicate that expectations for the Pakistanis willingness to help us in the fight against radical Islamic terrorism should be set at a very low level. Our intelligence would indicate the same,’ Pompeo said.

President Donald Trump wants to convince Afghan Taliban rebels that they have no hope of military victory and should try to negotiate a peace deal with Kabul.

But, Pompeo said, there is no chance the Taliban will do this if their fighters continue to enjoy the benefits of a safe haven on the Pakistan side of the border.

On Monday, Boyle said he and his wife decided to have children even while they were held captive because they always planned to have a big family.

‘We’re sitting as hostages with a lot of time on our hands,’ Boyle said. [We decided] ‘Hey, let’s make the best of this and at least go home with a larger start on our dream family.’

‘We always wanted as many as possible, and we didn’t want to waste time. Cait’s in her 30s, the clock is ticking.’

In an interview with Global News, Boyle talked about how it feels to finally be free.

‘A truly bizarre combination of elation at being free and away from those who brutalized us for so long.’ 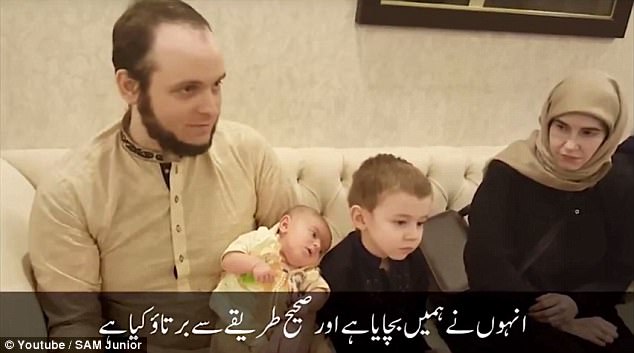 Pompeo’s account is at odds with the Pakistani military’s version of events, which said it rescued the couple and their three children born in custody after a tip-off that the family had been moved into Pakistan’s semi-autonomous tribal areas from across the border in Afghanistan, where they were captured in 2012 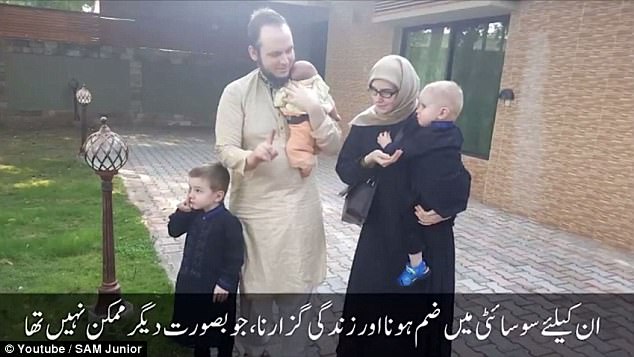 Washington suspects Pakistan of collusion with the Haqqani group, a hardline Taliban faction that targets the US-backed government in Kabul and is thought to have held the hostages

‘[And] depression realizing just how much damage we and our children have suffered in these five years that we hadn’t even realized,’ he said.

The parents of Caitlan Coleman have said they are elated she is free, but also angry at their son-in law for taking their daughter to Afghanistan.

‘Taking your pregnant wife to a very dangerous place, to me, and the kind of person I am, is unconscionable,’ Caitlan’s father, Jim Coleman said, told ABC News.

But Boyle insists that he was only there to help.

The former call center worker, said that he had gone to Afghanistan with his pregnant wife to help villagers ‘who live deep inside Taliban-controlled Afghanistan where no NGO, no aid worker and no government has ever successfully been able to bring the necessary help’.

Boyle has said conditions during the five-year ordeal changed over time as the family was shuffled among at least three prisons.

He has described the first as remarkably barbaric, the second as more comfortable and the third as a place of violence in which he and his wife were frequently separated and beaten.

In an interview with CP24.com, he revealed that the children are slowly coming to terms with their new lives.

‘Dhakwoen Noah was still struggling as much as ever with even just being able to look at his grandparents faces without terror’, he said in the interview on Sunday.

‘But honestly, just this morning he’s made a literally overnight improvement in that he has decided he loves his grandmother – after all a hearty breakfast of pancakes was the clincher, it seems – so obviously he’s still incredibly troubled and stressed over everything, but it’s a major step…she’s the first person he’s accepted. He went on to describe how the children are discovering toys and everyday objects for the first time.

‘For Najaeshi, it’s completely random — he’s just explored the idea of a closet and declared he wants to sleep in it tonight and make a giant “mouse nest” out of the clothes. His quality of life has not just improved, it’s gone up a thousandfold,’ he said.

‘For Dhakwoen, it’s the spinning top – he can’t get it to spin himself yet but he seems to wish it could spin forever. Needless to say, family members fingers are getting sore but we love him enough to keep spinning it!

‘For Ma’idah, it’s the discovery that there are other women in the world; she still can’t be within a meter of any man except her father but if she sees a woman she starts squirming and trying to get over to her, regardless of who it is — to nestle in the love.’ 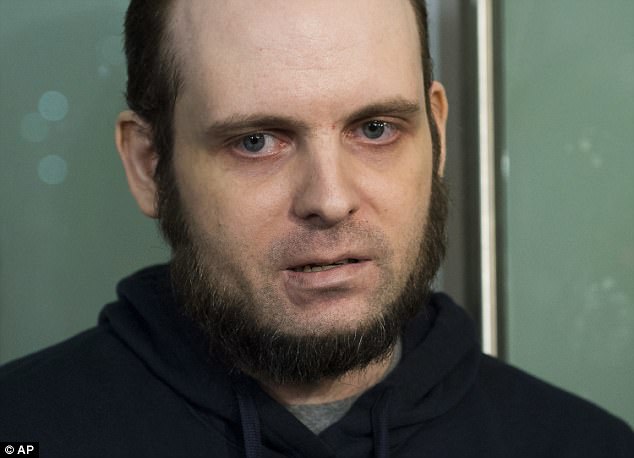 Joshua Boyle speaks to the media after arriving at the Pearson International Airport in Toronto on Friday, October 13 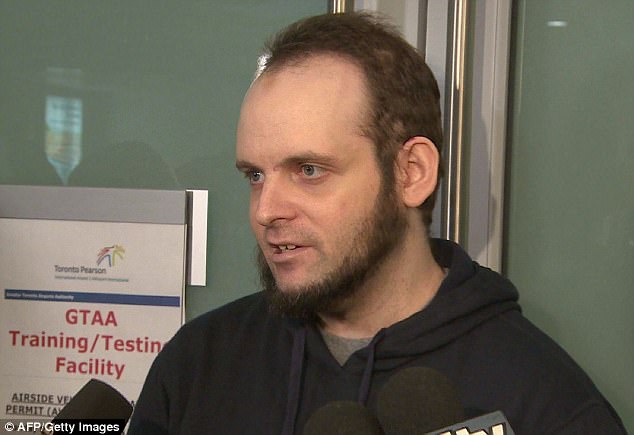 In an interview with the Toronto Star, Boyle also revealed that he thought it was a joke when his captors told him Donald Trump had been elected president of the US

In an interview with the Toronto Star, Boyle also revealed that he thought it was a joke when his captors told him Trump had been elected president of the US.

‘It didn’t enter my mind that he was being serious,’ Boyle said.

On Saturday, Boyle was pictured playing with one of his sons in the garden of his parents’ home.

The boy appeared happy and healthy, digging in the grass as his father showed off the different plants and later spoke on a cellphone.

Coleman, who is from Stewartstown, Pennsylvania, has yet to speak publicly since the rescue.

Boyle was once briefly married to Zaynab Khadr, the older sister of former Guantanamo Bay detainee Omar Khadr and the daughter of a senior Al-Qaeda financier who had contacts with Osama bin Laden.

The Canadian-born Omar Khadr was 15 when he was captured by US troops following a firefight and was taken to the US detention center at Guantanamo Bay.

Officials had discounted any link between that background and Boyle’s capture, with one describing it in 2014 as a ‘horrible coincidence.’