Killer Japanese notweed is back to destroy UK gardens

Homeowners have been warned there is no end to their worst garden nightmare – scientists have proved that the dreaded Japanese Knotweed cannot be killed off.

Experts have spent five years on the world’s biggest field study of knotweed to test different ways of annihilating the invasive plant – but have come up empty handed.

After 19 attempts to kill the plant, scientists failed to find a successful way of managing the species.

The bamboo-like shoots plague gardeners because they grow at an incredibly fast rate and chokes other vegetation.

Scientists have found that the dreaded Japanese Knotweed cannot be killed off. After 21 attempts to kill the plant, they failed to find a successful way of managing the invasive species (stock image)

Researchers from Swansea University conducted the world’s biggest ever study into eradicating the plant at two sites in Taff’s Well, near Cardiff, and in Swansea.

The team tested all 19 of the main methods of controlling the plant, including chemical solutions, physical projects and a mixture of the two.

The weed is incredibly hard to control, as its underground roots grow stronger and faster than the above-ground plant visible to gardeners.

Experts say eradication is not possible and that working with the plant’s biology produces the best results.

‘We began focusing on knotweed at a time when there was a great deal of hysteria surrounding it.

‘At the time, most information for people affected by the plant was largely based on anecdote. This led to the prospect of unscrupulous companies offering expensive and ineffective treatment solutions.

‘It was incredible to us that there was no long-term, large-scale field trial analysis of the treatment methods used to control Japanese knotweed.’ 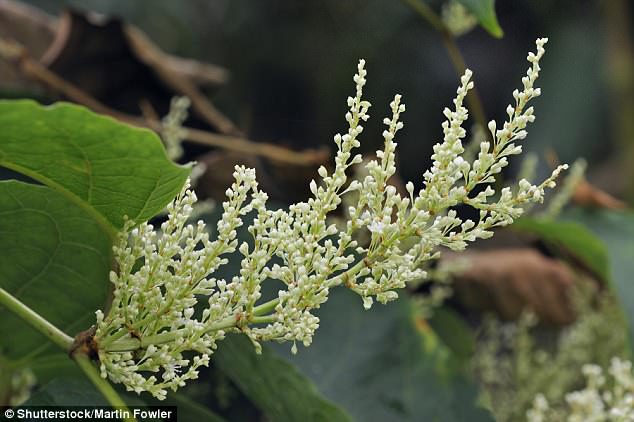 Coauthor Professor Dan Jones said gardening companies who claim to be able to eradicate the plant were not telling the whole story.

He added: ‘Off the back of the first three years of data we’ve found that eradication is not possible. Hopefully over the longer term we may move towards that by using new chemicals we’re looking at.

‘Claims made by companies, stating that they could eradicate Japanese knotweed using herbicides in short spaces of time have now been proven to be false, based on our experiments.

‘Furthermore, we have shown that applying the wrong herbicides at the wrong time of the year leads to greater herbicide use and environmental impacts.’

Dr Jones said the best chemical to control the knotweed was glyphosate – but the herbicide is feared to pose a risk to other wildlife too.

WHAT IS JAPANESE KNOTWEED?

Japanese Knotweed is a species of plant that has bamboo-like stems and small white flowers.

Native to Japan, the plant is considered an invasive species.

It is incredibly durable and fast-growing, and can seriously damage buildings and construction sites if left unchecked.

The notorious plant strangles other plants and can kill entire gardens.

He added: ‘There’s a range of issues in terms of risk and hazard. There’s a political issue around glyphosate as well.

‘What we’ve done is work with the biology of the plant to minimise the amount of herbicide we’re using over a treatment life cycle.

‘Although we’re using quite a contentious herbicide in that respect, we are using far less of that herbicide than you would use for other products that don’t work on Japanese knotweed.’

Househunters looking at homes in areas dense with Japanese knotweed can often struggle to secure mortgages, over fears the roots could cause structural difficulties to buildings.

Chartered surveyor David Gregson, who provides specialist advice on the issue, said: ‘The main problem is mortgage lenders are very reluctant to lend on properties where knotweed is present and obviously that means in turn people can’t sell their properties and it might sometimes be because knotweed is present in the next door garden.

‘A typical situation is a couple wanting to get divorced. They’ve got a lot of knotweed in their garden, they both want to move on with their lives and they’ve got a house they can’t sell.’