Kim Kardashian is marking the one-year anniversary of Skims by enlisted several A-list pals, and a handful of her customers, to show off the brand’s most popular designs in a star-studded campaign.

The 39-year-old marked the milestone occasion by posing up for a striking shoot that sees her showing off her iconic curves in a nude shapewear design, while lounging in a room that is filled with pieces from the brand’s many collections.

Indeed, in an homage to all that the brand has achieved in the last 12 months, each of the individual shoots that make up the complete campaign see Kim’s chosen models posing alongside decorations or items that represent a piece of the label’s history, be it a previous campaign, or an old design.

Milestone: Kim Kardashian has marked the one-year anniversary of her shapewear brand Skims by showing off her famous curves in a stunning new campaign – alongside several celebrity pals, and a handful of customers 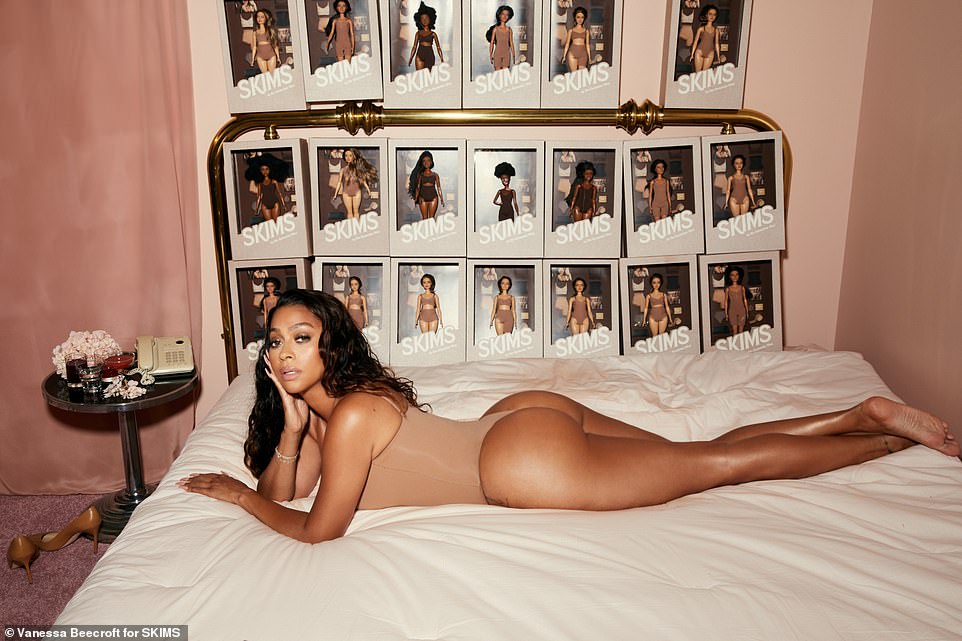 Gal pals: Kim also enlisted longtime friend La La Anthony 39, to model for the campaign, which pays tribute to all that Skims has achieved over the past year, by featuring different campaigns, products, and designs in the shoots – even Skims Barbies 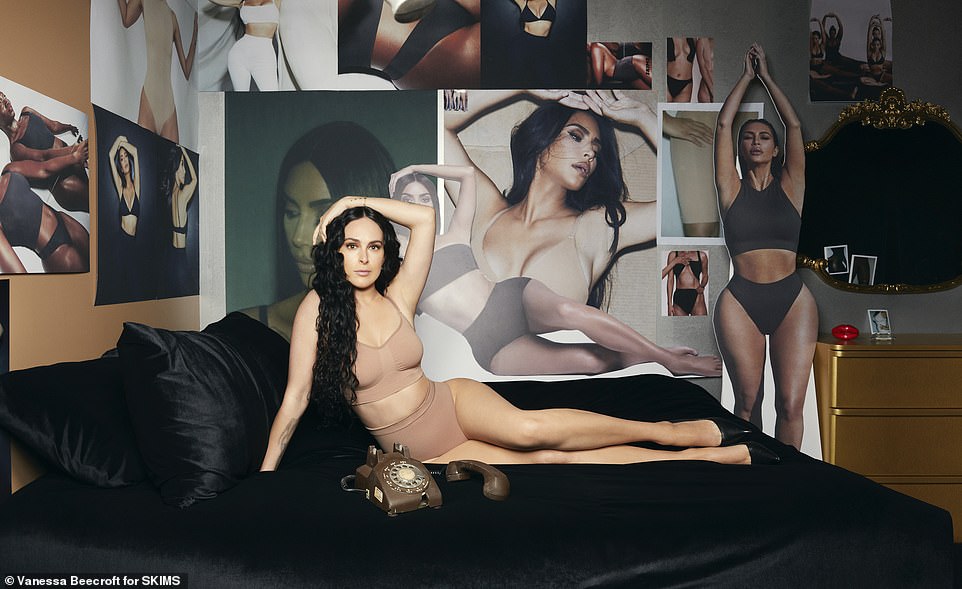 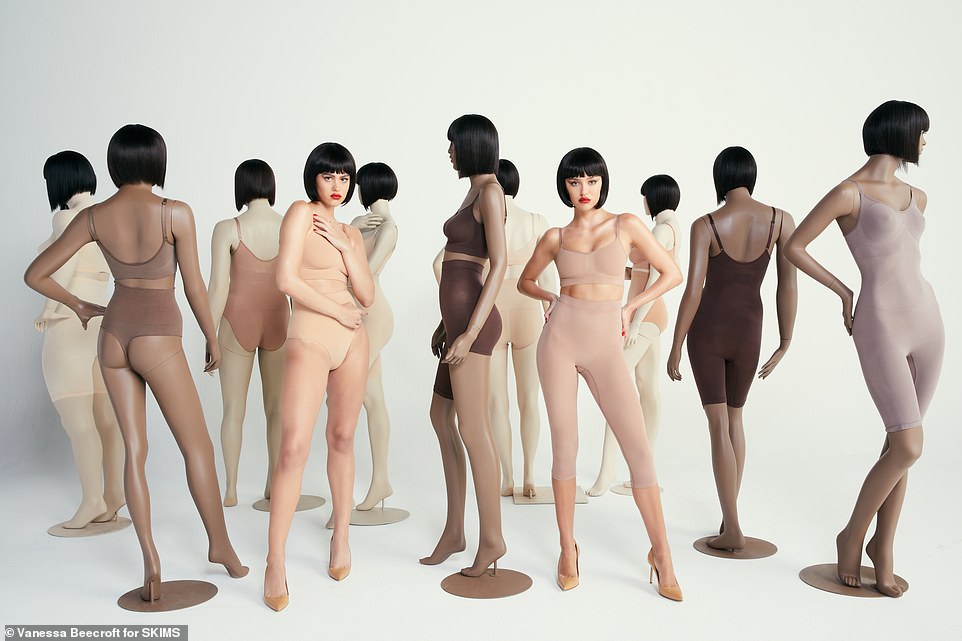 Sister sister: Lisa Rinna’s model daughters Amelia Gray and Delilah Belle Hamlin look like twins in their shoot, which sees them both modeling short black wigs while posing alongside mannequins with the same blunt hairstyle 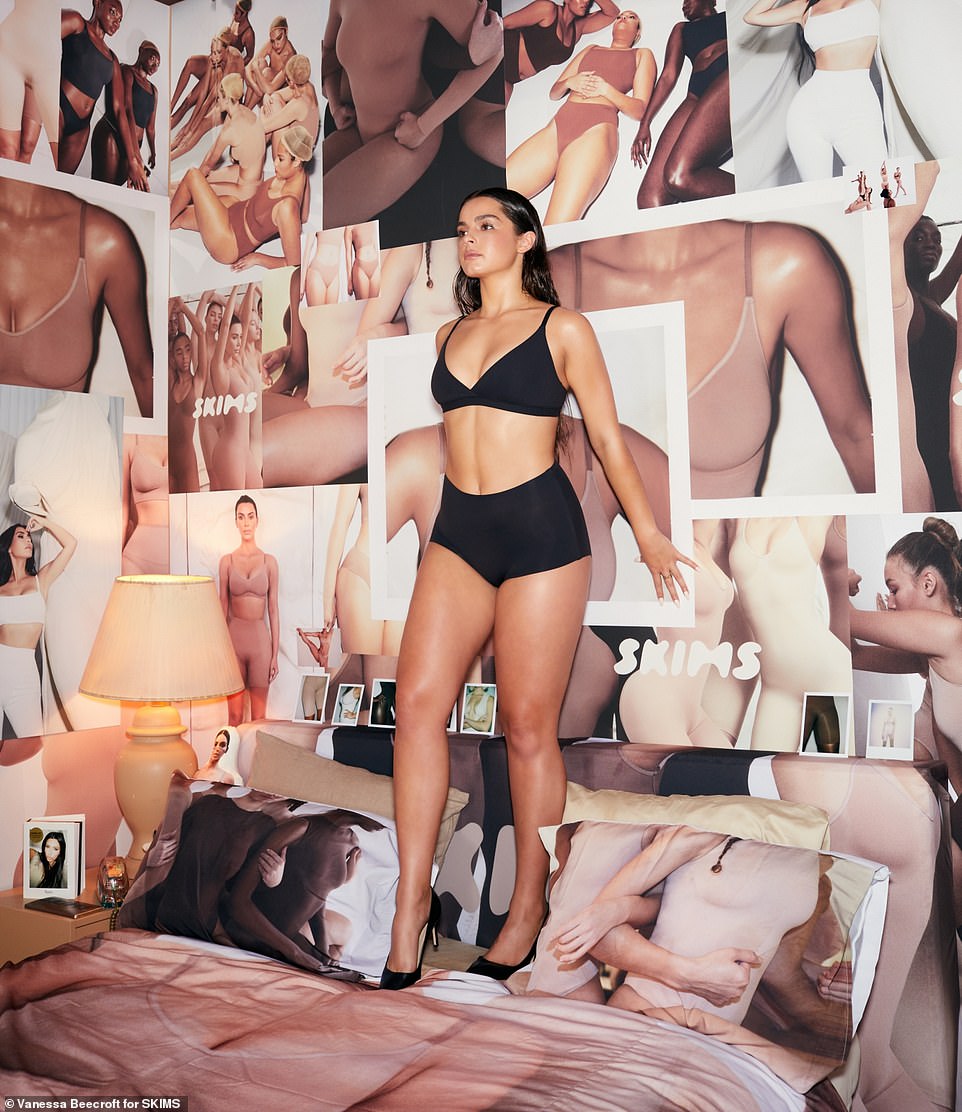 Rising star: Kourtney Kardashian’s TikTok star pal Addison Rae also poses in the campaign, modeling in a room that has been decorated floor to ceiling in Skims images – and also features Kim’s iconic selfie book, an apt addition for the social media star

And in order to best showcase the brand’s ethos – that ‘Skims is for everybody’ – Kim made sure to call upon a diverse group of models to pose in her designs, enlisting both celebrity friends, and consumers, for the special shoot.

However, the campaign also features eight Skims customers, who were invited to step into the spotlight for the groundbreaking shoot – which is the first of its kind for the brand, and was inspired, Kim explained in a statement, by the many fans who have taken to social media to share images of themselves proudly rocking her designs.

Each model was set up in a special set for their shoot – which was masterminded by Italian photographer Vanessa Beecroft – with each person given a unique setting that paid tribute to the brand’s first year in business.

For example, teenage social media sensation Addison, 19 – who has sky-rocketed to fame over the past few months thanks both to her impressive TikTok following and her close friendship with Kim’s sister Kourtney, 41 – is seen modeling a black bra and boybriefs while standing atop a bed that has been covered in sheets printed with Skims imagery.

Photos from the brand’s previous campaigns also cover the walls and the ceiling of the room in tribute to Skims’ beginnings. In a nod to the teen’s online stardom, a copy of Kim’s iconic selfie book can be seen propped up on the bedside table. 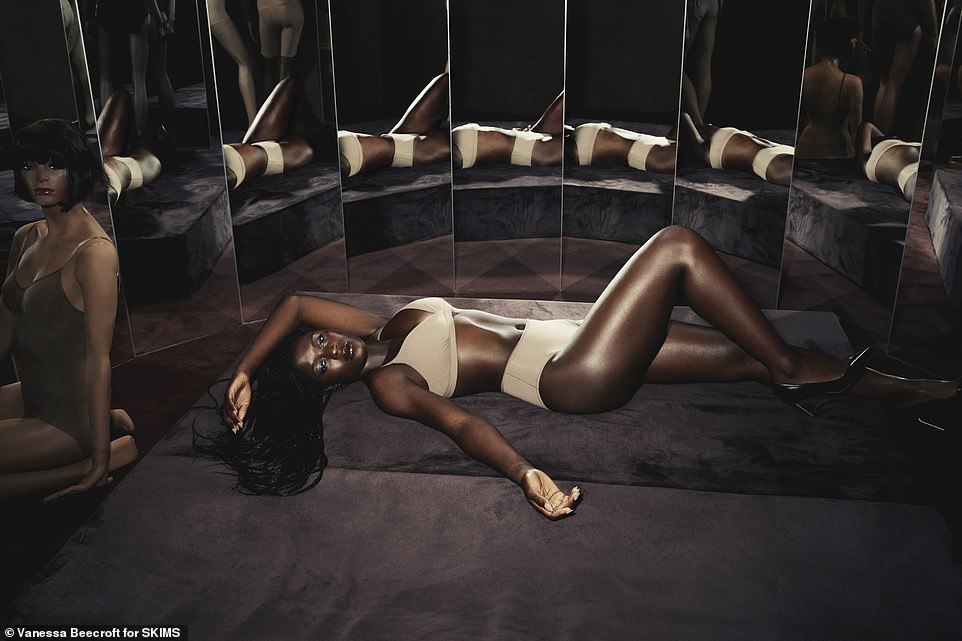 Stunner: Actress Jodie Turner Smith, who gave birth to her first child with Joshua Jackson just four months ago, lay on the floor in a room surrounded by mirrors to showcase her Skims two-piece set 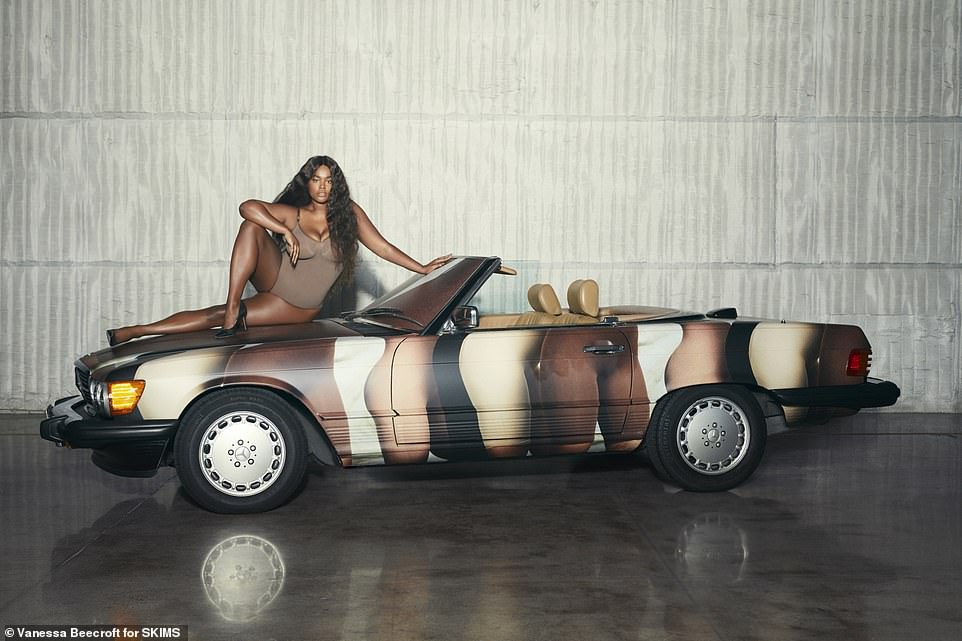 Vroom vroom! Precious Lee – who was the first black plus-size model to appear in the pages of Sports Illustrated Swimsuit, posed atop a convertible that had been covered in Skims imagery for her shoot 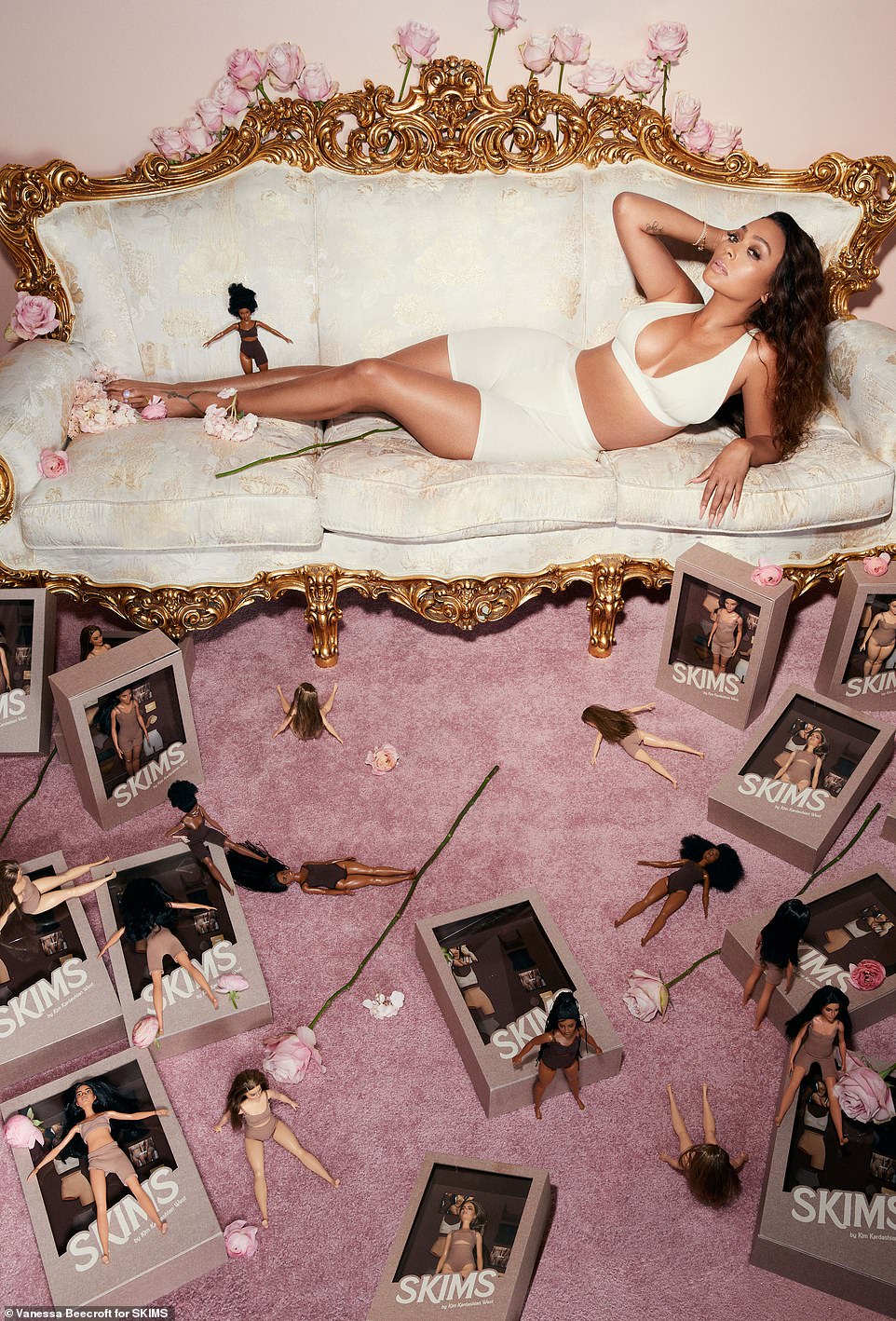 In a Barbie world: La La appears in multiple shots, including one that shows her lying on a sofa while surrounded by specially-made Skims dolls that are all wearing designs from the brand

‘It’s wild to think that it’s already been one year since we launched Skims,’ the mother-of-four said.

‘I’m eternally grateful for the love and support that our customers have shown both me and the brand. I’ve loved seeing everyone’s photos in Skims and reading the comments on social media, and I wanted to use this time, the campaign, and customer gifting to really say thank you.

‘The customers are our inspiration for developing new ideas and collections and there is so much more to come. I can’t wait to share it all and continue to grow our amazing community.’ 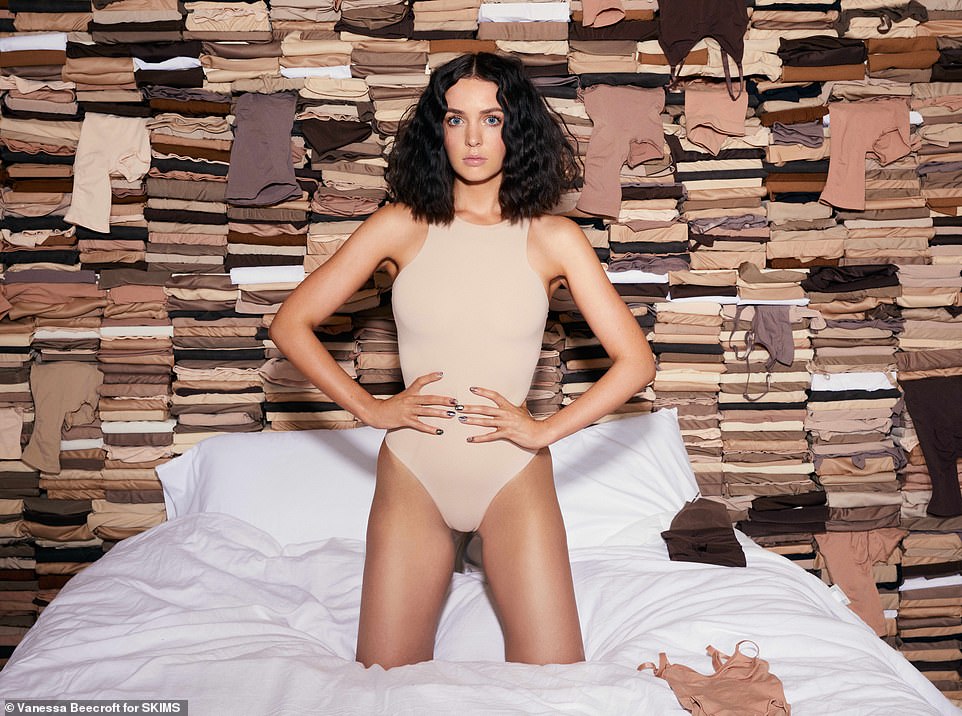 Breaking barriers: Kim also gave several customers the chance to star in her campaign, calling on the likes of LA resident Madison Chertow to make their modeling debut after being inspired by all the fans who shared images of themselves in Skims 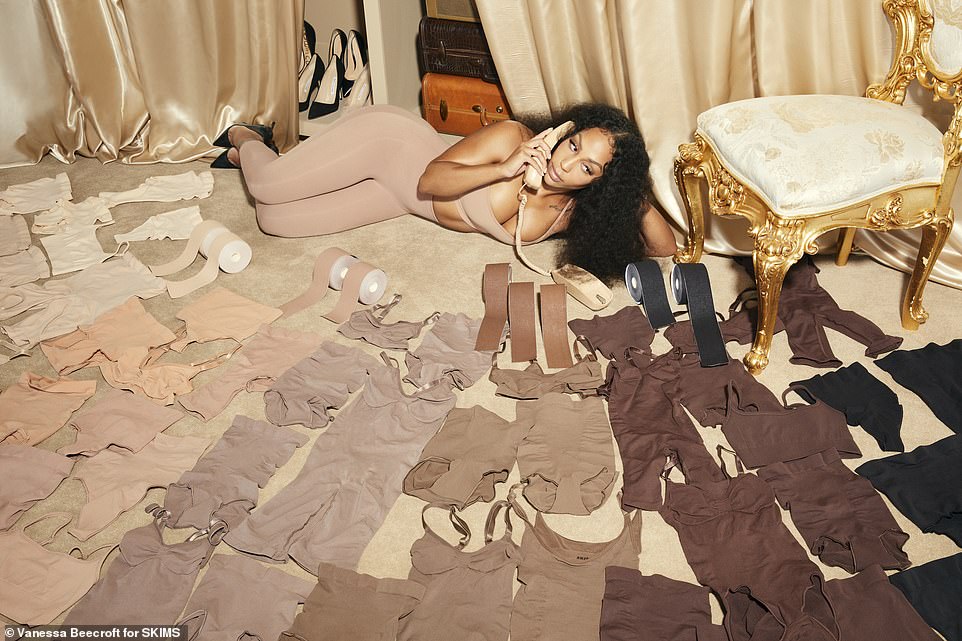 Making moves: Fitness trainer Brandi Yvonne is another Skims fans who got the chance to star in the anniversary campaign, which Kim says is a celebration of just how much her customers have inspired her throughout the year 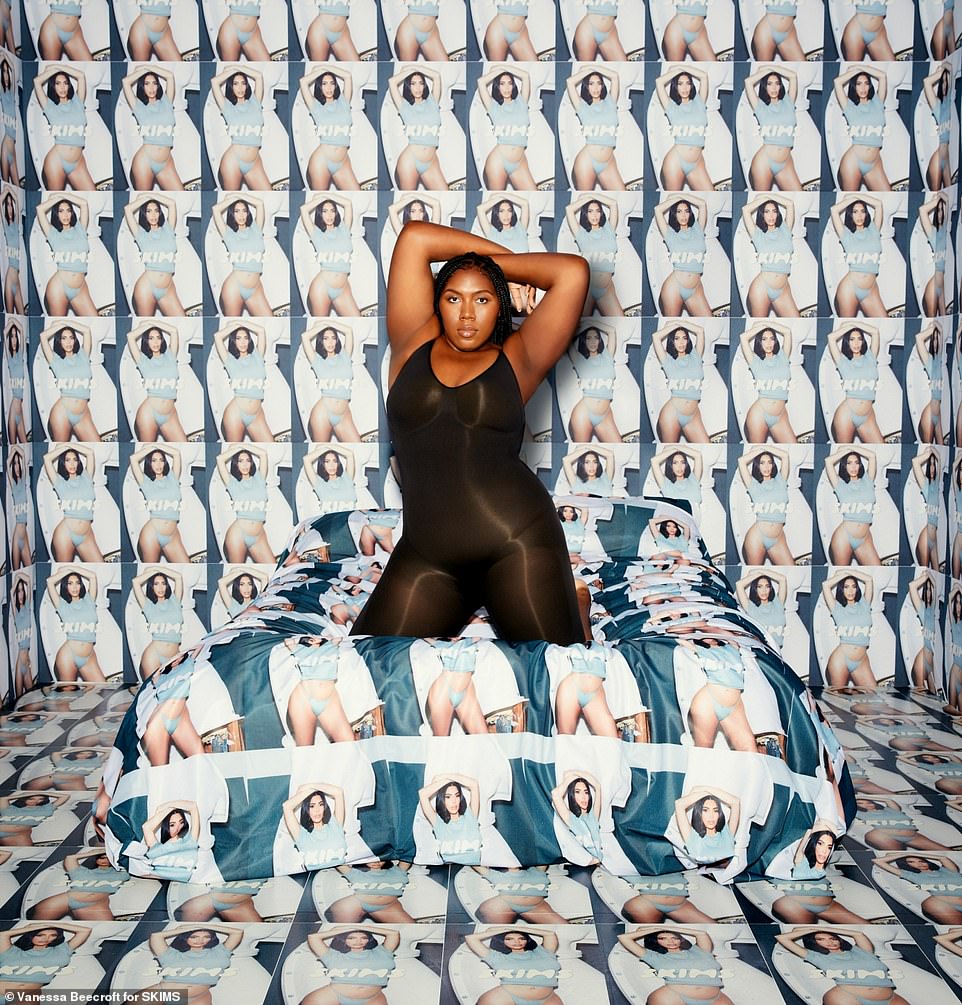 Something for everyone: The reality star enlisted a diverse cast of celebrities and customers – like Myleeza, a long-time Kardashian fan whose shoot has been posted on a billboard over Sunset Boulevard