Kim Kardashian showed off her dazzling Christmas Eve attire in a behind-the-scenes video shared onto her Instagram story, while also revealing her newly dyed brunette hair after recently coloring her locks honey blonde.

The reality star, 42, filmed herself as she took a selfie video to give her 337 million followers a closer look at her sparkling, fitted gown she opted to wear for the evening’s festivities.

Earlier during the day, the TV personality flaunted her fit physique and curves sporting a one-of-a-kind, leopard bodysuit as she posed for a new photo series also shared onto the popular social media platform.

Party time: Kim Kardashian, 42, uploaded a glimpse of her Christmas Eve party dress onto her Instagram story on Saturday 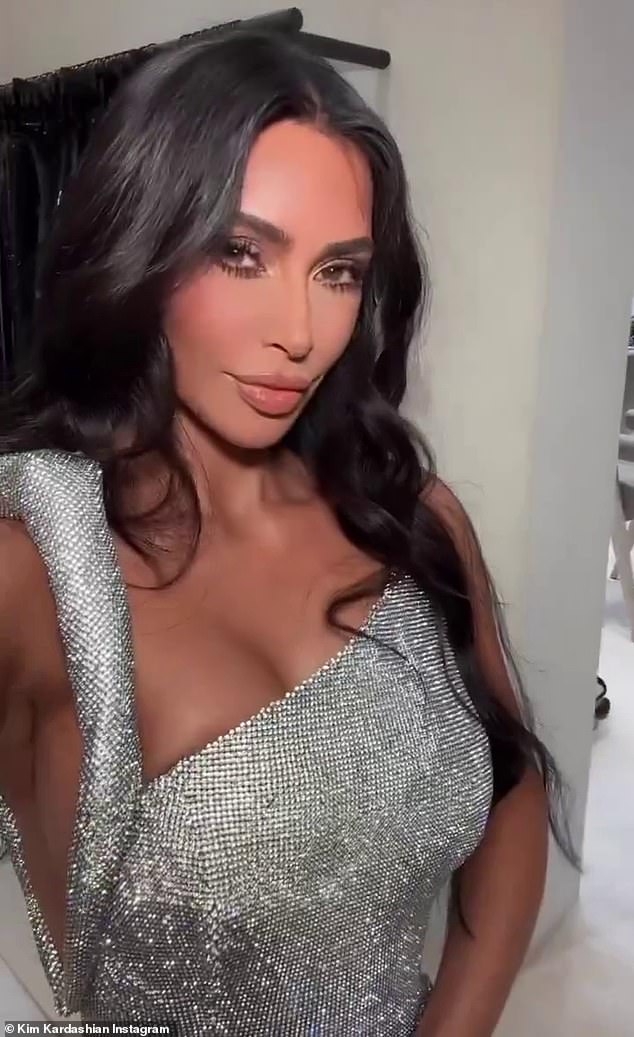 Va va voom: She dropped jaws in her stunning dress

The Kardashians star dressed to impress in a figure-hugging, silver sparkling dress that contained an asymmetrical neckline.

The eye-catching gown, that shimmered under the bright lights in the reel, contained a chunky strap on the right side, while the left comprised of a thin, flat strap.

‘We’re back!’ Kim exclaimed at the start of the first clip shared on her Instagram stories on Saturday. She then blew a kiss towards the camera as the video came to an end.

Celebrity hairstylist, Chris Appleton, was also tagged in the clip, and could be seen behind the star as he adjusted her wavy locks. 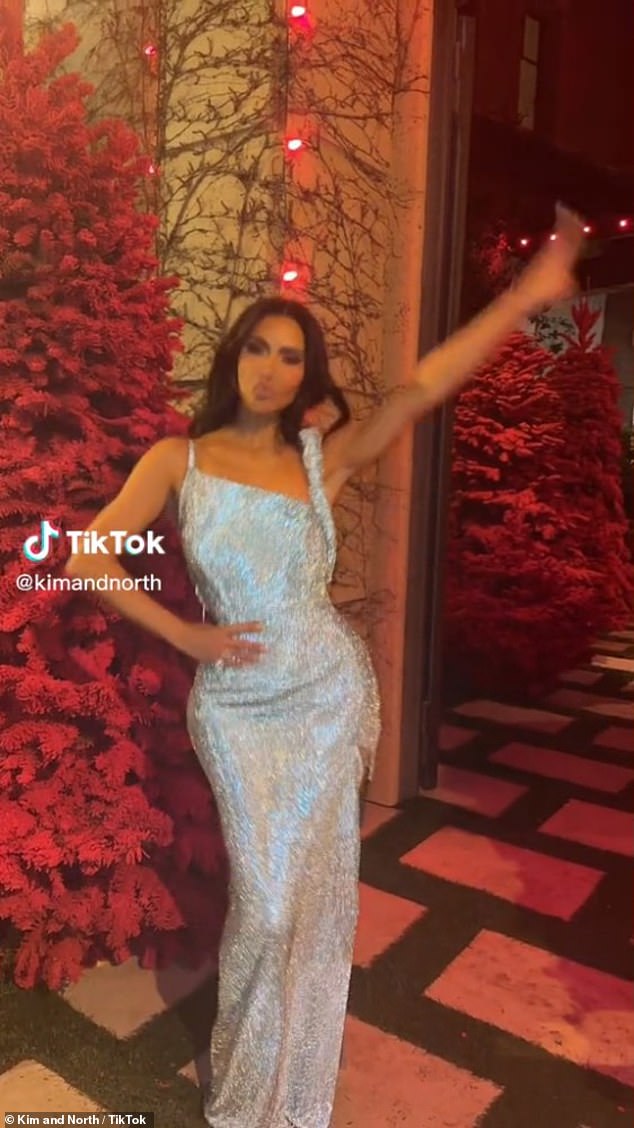 Strike a pose! The star displayed the entirety of her dress in a TikTok video 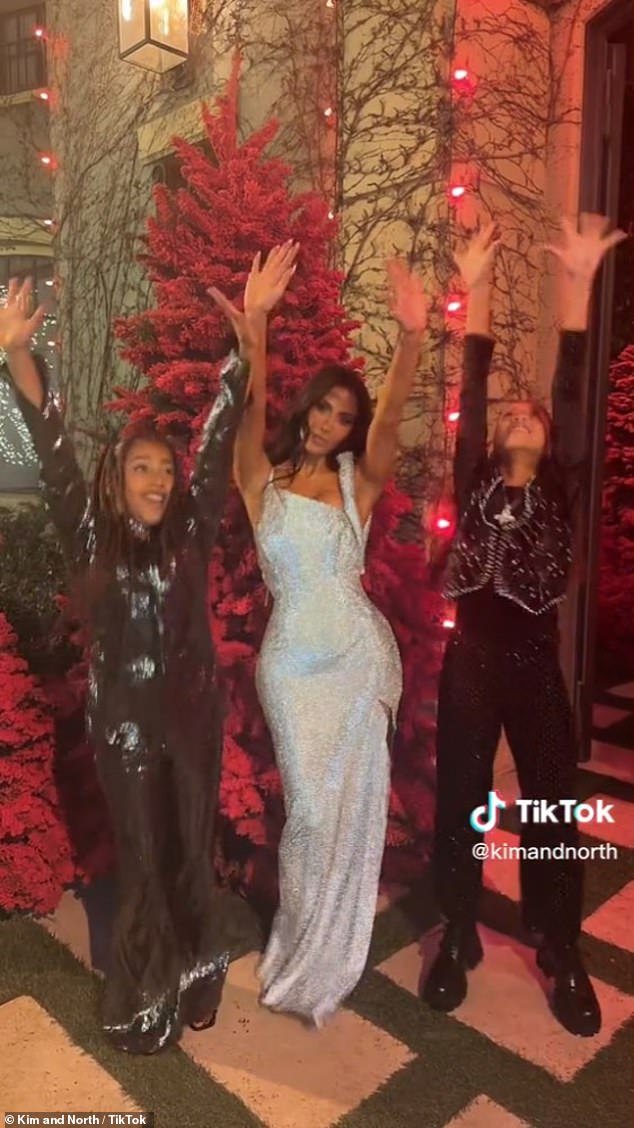 Throw your hands in the air! She had some fun alongside her daughter North 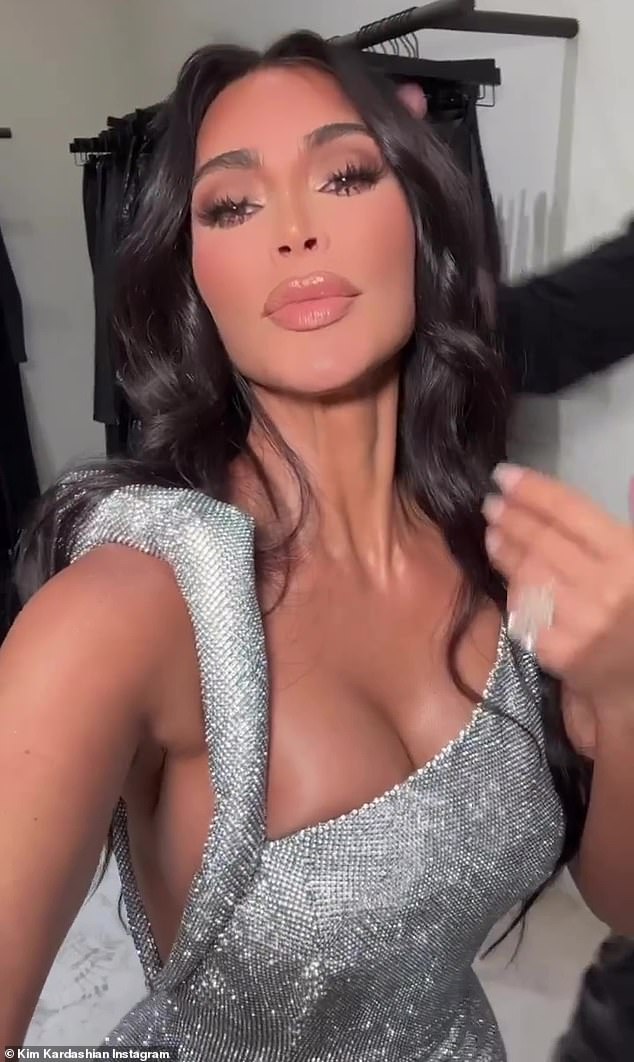 Having fun: The reality star posed in the glittering dress as she filmed a quick selfie video to show off the stunning gown 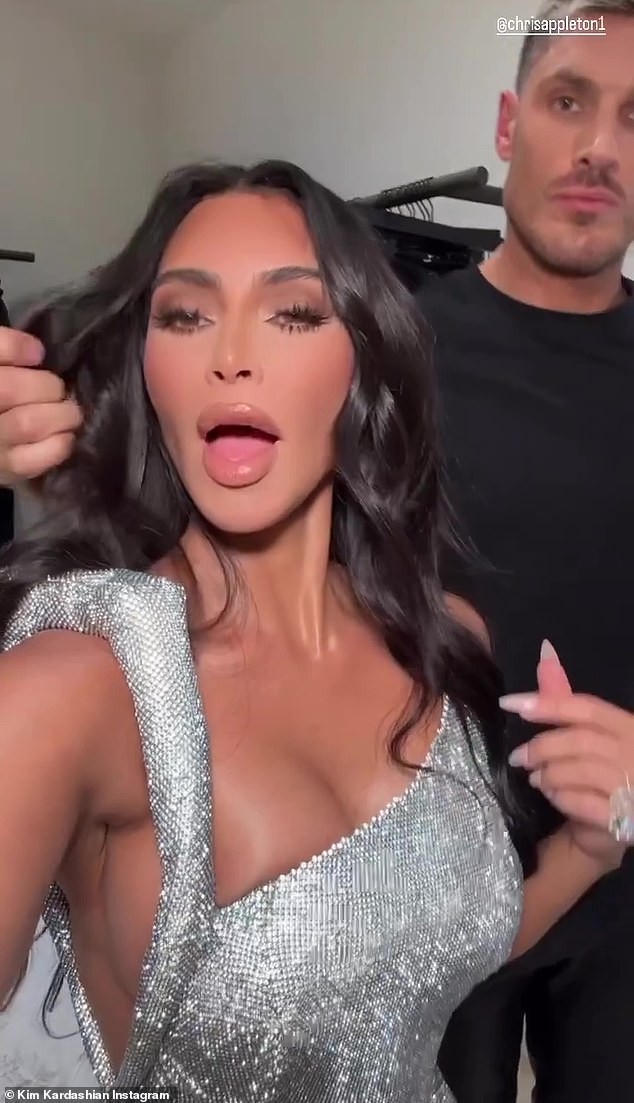 ‘We’re back’: During the first Instagram story, the beauty announced, ‘We’re back!’ which was possibly in reference to her returning to her natural brunette hair color

She also displayed the dress in it’s entirety on her TikTok account, where she posted video of her playing around with her daughter.

Kim recently dyed her hair a honey blonde color after sporting platinum blonde. However, earlier this month, she jumped to Instagram to share a post as she contemplating her next hair color.

‘Thoughts on Honey? Should I dye my hair platinum again or go dark?’ she had penned in the caption to her followers, while also sharing snaps of herself flaunting the honey blonde locks.

In her latest Instagram stories, the mother of four appeared to have made the decision to go back to her natural brunette color.

Her makeup was elegantly done for the Christmas Eve party, comprising of a heavy layer of black mascara on both her bottom and top lashes, and a bronze eyeshadow to make her eyes pop.

She also opted for a warm, pink blush and highlighter to accentuate her cheekbones, and added a nude-colored tint to her lips for a finishing touch. 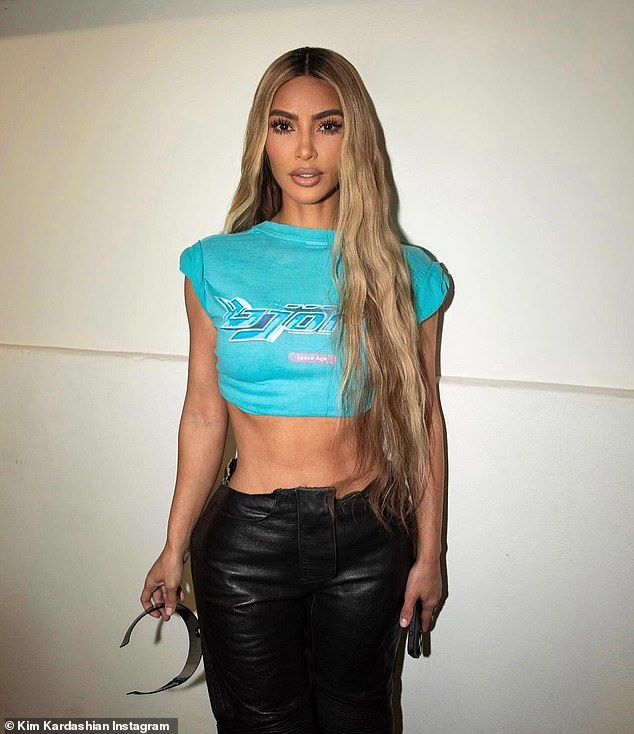 New hair color: Earlier this month, she jumped to Instagram while contemplating her next hair color, penning, ‘Thoughts on Honey? Should I dye my hair platinum again or go dark?’ 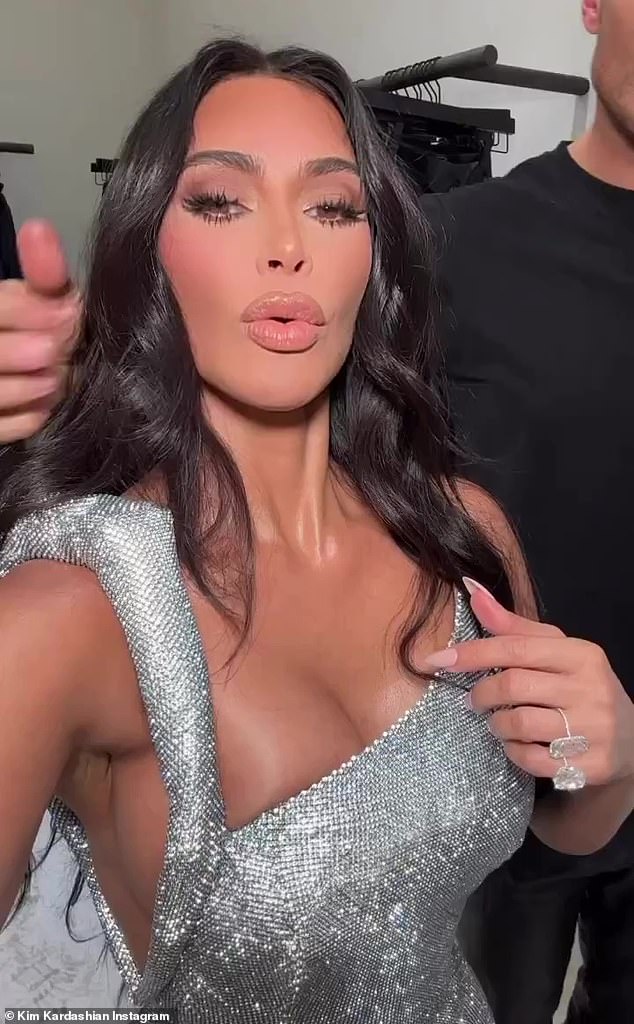 Dazzling: As Kim filmed the selfie video, her silver gown sparkling under the bright lights in the room 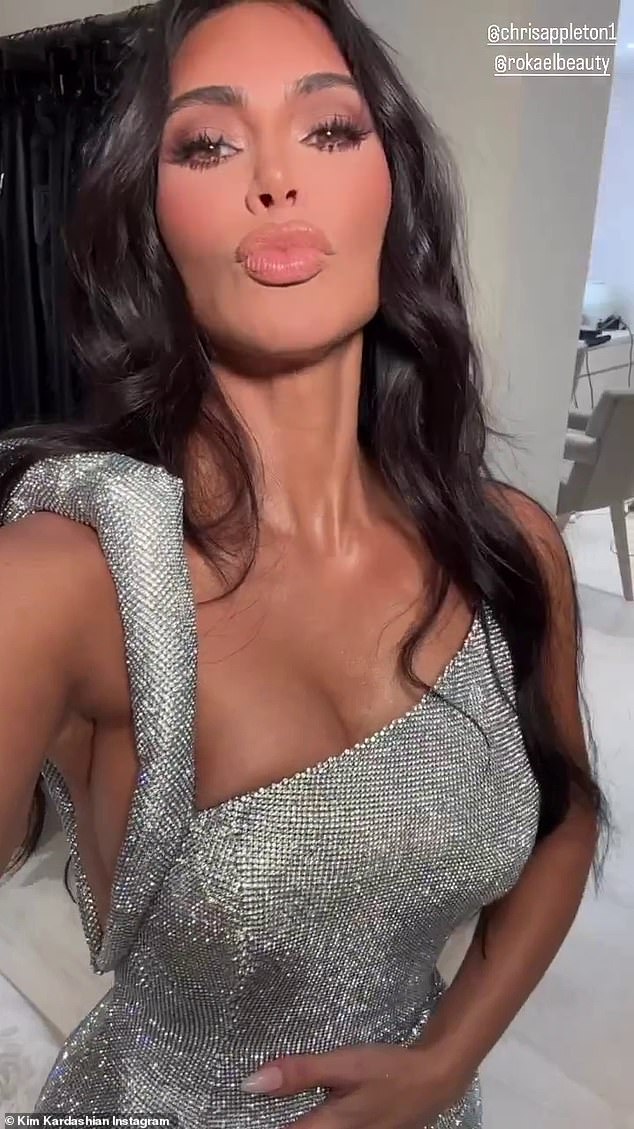 A kiss: As the clip concluded, the Keeping Up With The Kardashians star blew a kiss towards the phone camera

To allow her glittering dress to be the main focal point during the festivities, Kim opted to not wear any flashy necklaces or earrings. Instead, the beauty adorned her hand with a few, sparkling rings.

Along with showing off her ensemble on Instagram, the star additionally embraced the festive season by sharing a short TikTok video alongside her daughter, North West.

In the six second clip, which has currently garnered 1.9 million views, Kim and her nine-year-old mini me mouthed the words from the trending sound, ‘It’s time,’ which then leads into Mariah Carey’s classic hit, All I Want For Christmas Is You.

The SKIMS founder draped her right arm around North, who was also wearing a sparkling, sequin ensemble. Her hairstylist could be seen adding a few finishing touches to her long locks with a curling iron as they clip played out. 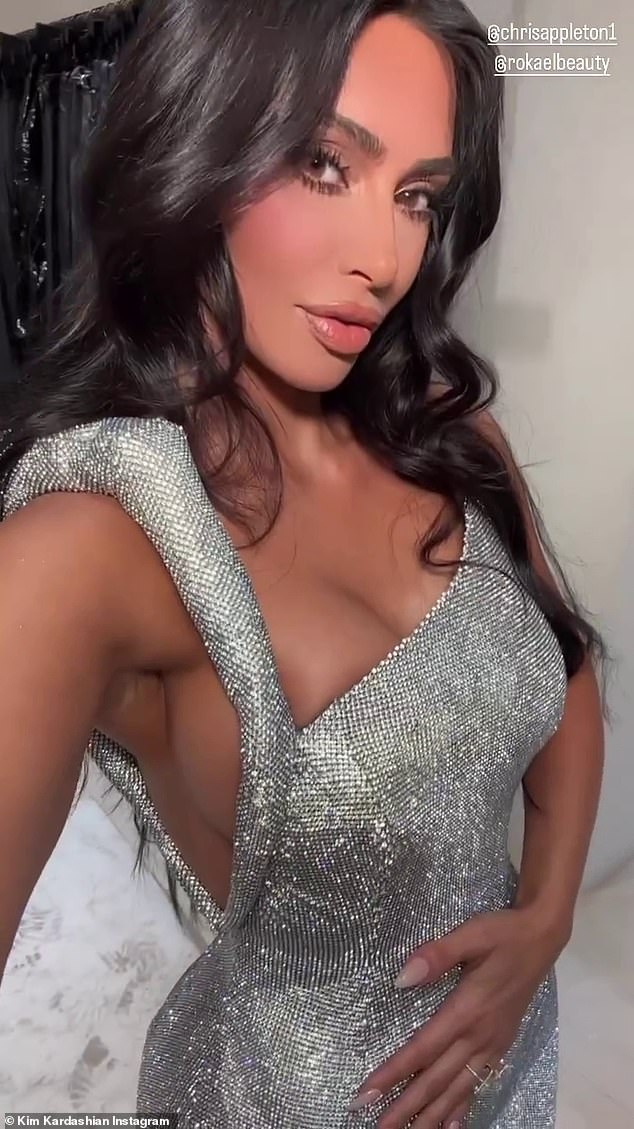 Dressed to impress: In a second Instagram story shared on Christmas Eve, Kim gave her 337 million followers a second close-up look of her gown 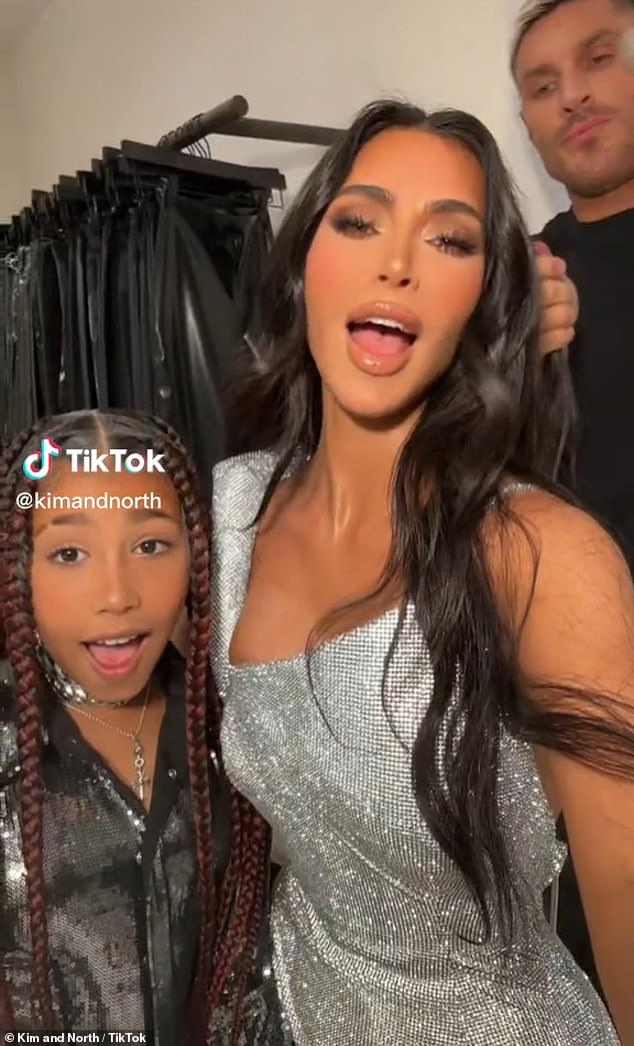 Family time: The star additionally embraced the festive season by sharing a short TikTok video alongside her daughter, North West 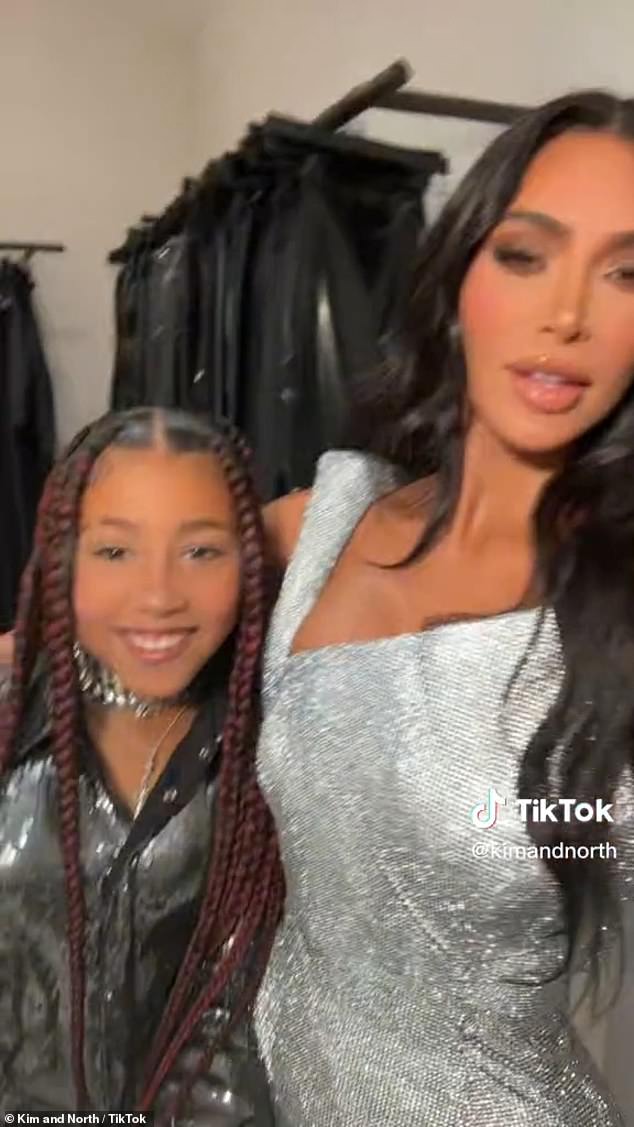 Finished getting ready: Kim and North mouthed the words from the trending sound, ‘It’s time,’ which then leads into Mariah Carey’s classic hit, All I Want For Christmas Is You

Kim wasn’t the only who flaunted her dress for the party, with her daughter, North, also uploading a solo clip of herself on TikTok showing a before and after video of herself getting ready.

The clip began with North wearing casual clothing, and then transitioned to her all decked out in a sparkling, dark gray ensemble along with dazzling necklaces.

During the course of the video, she mouthed the words to another trending sound, ‘Baby girl, I’m the man from the big va.’ The lyrics are from the track, Are you That Somebody, by Aaliyah.

Kim’s sister, Khloe Kardashian, also shared behind-the-scenes content on her own social media platform. She shared a glimpse of her stunning red dress and diamond necklace she had chosen to wear for the night.

She could be seen holding a miniature Santa decoration in a clip, humorously explaining that, ‘I’m the first one here.’

Kylie Jenner also uploaded a mirror selfie on Christmas Eve, as both she and her daughter, Stormi, donned matching gold and black dresses for the festive party. 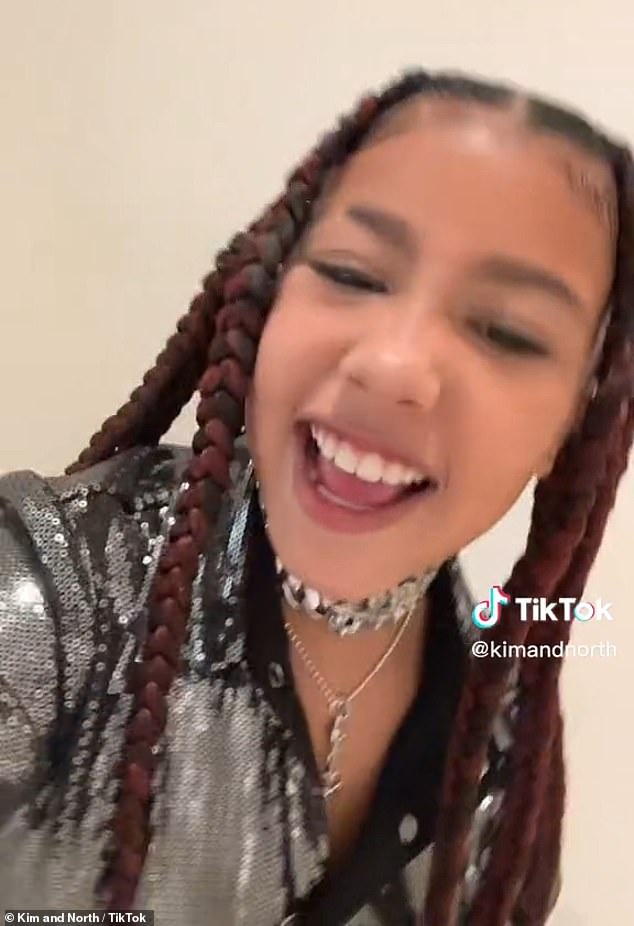 Also dressed for the party: Kim’s daughter, North, also uploaded a solo clip of herself on TikTok showing a before and after video of herself getting ready 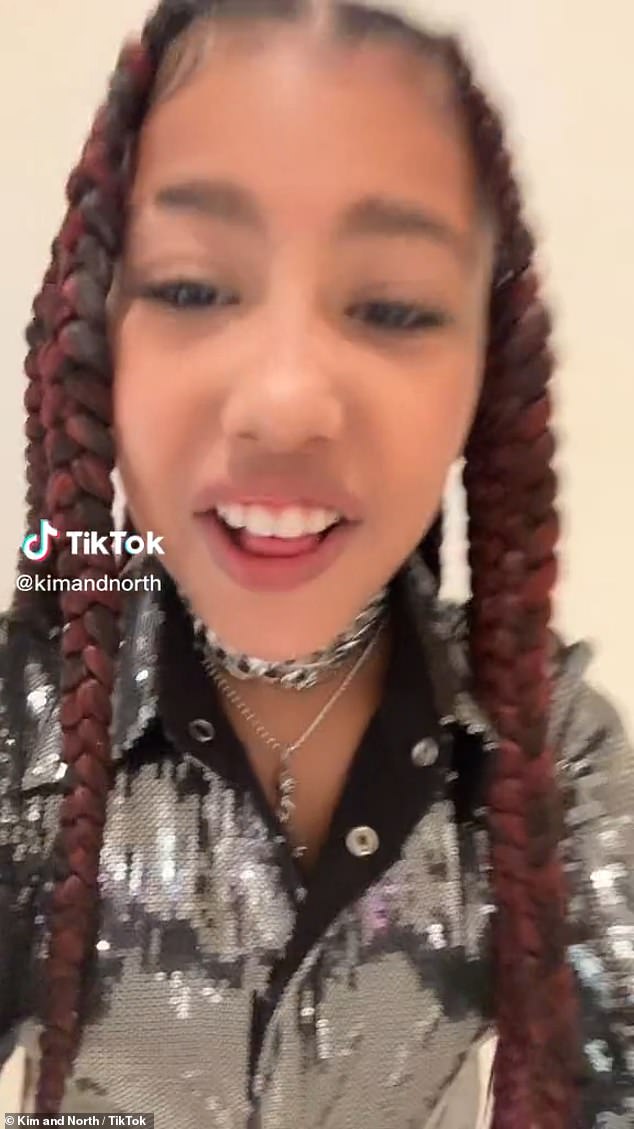 Glittering ensemble: The clip began with North wearing casual clothing, and then transitioning to her all decked out in a sparkling, dark gray ensemble along with dazzling necklaces 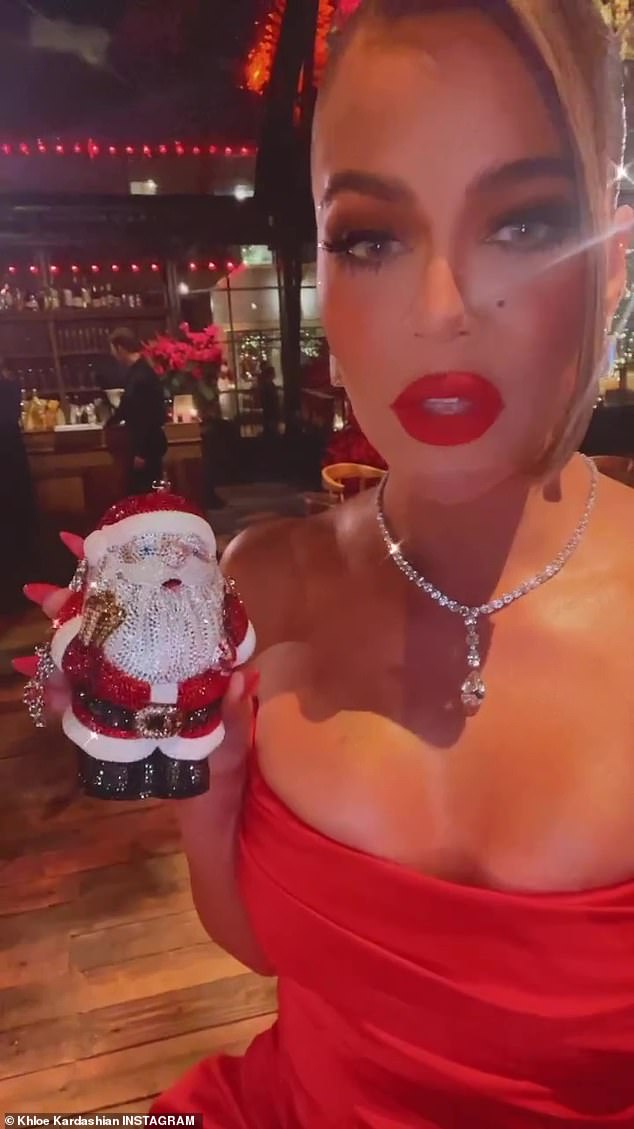 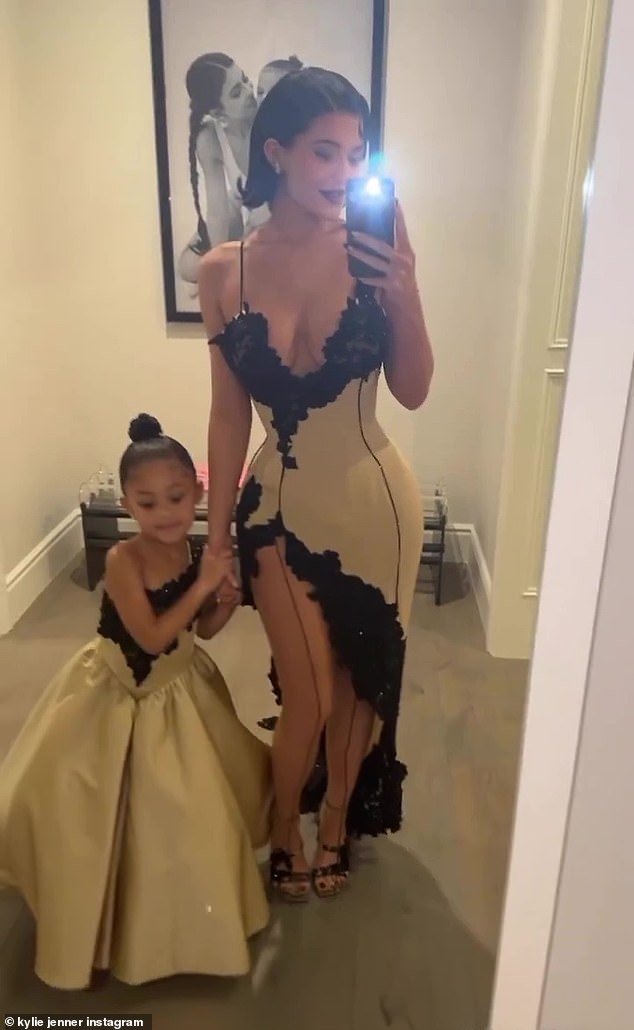 Twinning: Kylie Jenner also uploaded a mirror selfie on Christmas Eve, as both she and her daughter, Stormi, donned matching gold and black dresses for the festive party