The reality star, 42, received a sleek custom minivan – the first of it’s kind to appear in the U.S. – on an episode of the TNT show.

The show aired as controversy raged on around her response to the scandal surrounding her beloved fashion brand Balenciaga.

‘Oh my God!’ Kim Kardashian could hardly contain herself as she laid her eyes on her brand new custom van in an upcoming episode of Million Dollar Wheels

A sneak peek for the TNT series shows the ordinarily calm and collected Kim unable to contain her surprise as she lays her eyes on the van for the first time.

As Kim is presented with the car, she gushes: ‘Oh my God! Oh my God! This is amazing! Can I get in?’

After sliding into the car she continues, ‘Oh my God.’ 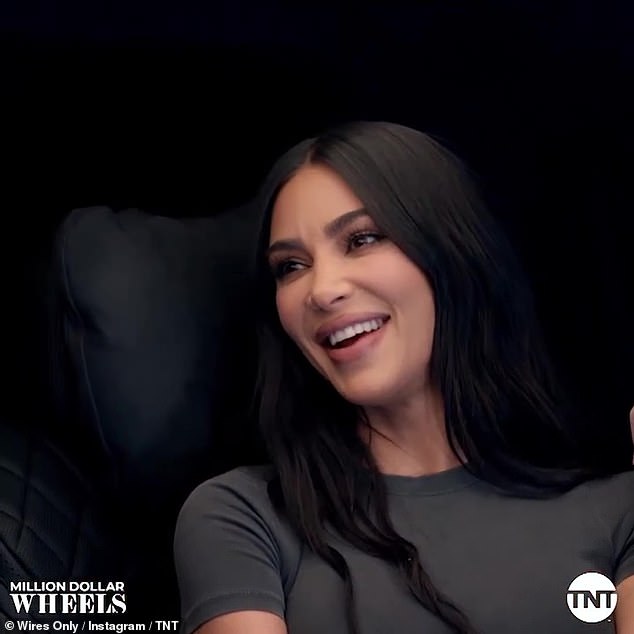 Ride or die! As Kim is presented with the car, she gushes: ‘Oh my God! Oh my God! This is amazing! Can I get in?’ 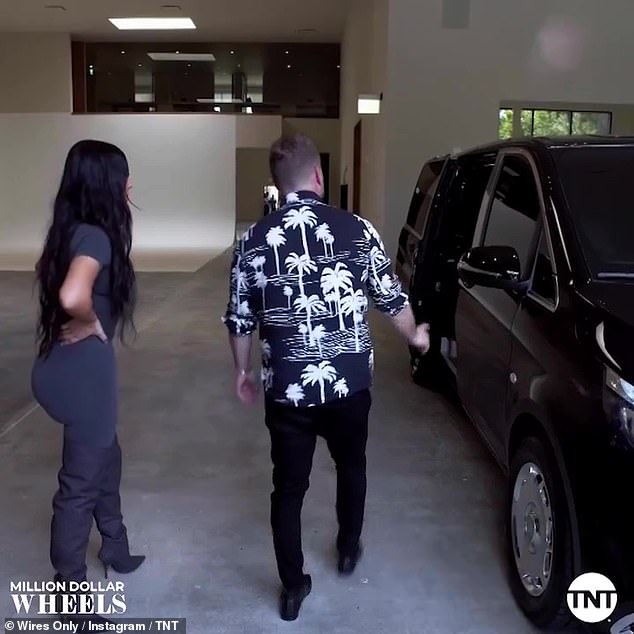 Start your engines! Kim was beside herself as she slid inside the car

‘I know you’re extremely patient. Your assistant called me 79 times,’ he told Kim before she apologized profusely. ‘I know, I know, I’m sorry!’ she said.

RD said the vehicle was the first one to appear in the U.S. in its current form.

‘This is literally the first one in the U.S. in this set up, and it’s coming to you. So we’ve been super excited, working around the clock to make this happen,’ he explained. 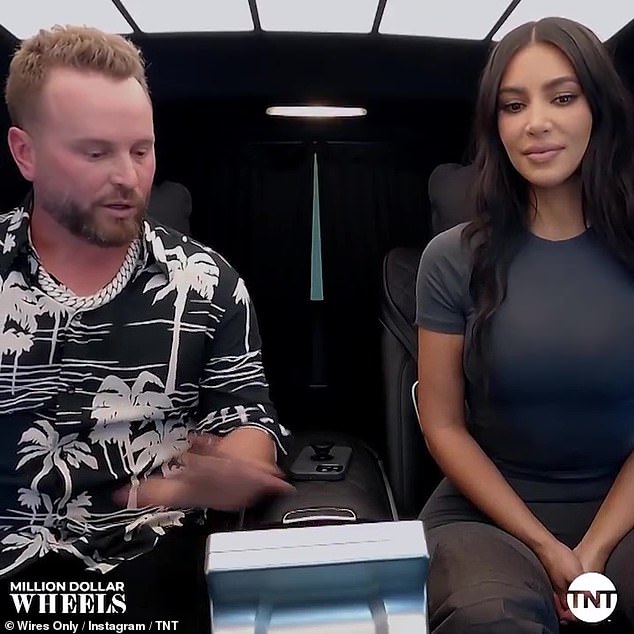 The lavish car will just be the latest vehicle to join Kim’s impressive collection.

‘I’ve always been a car girl,’ she previously told Vogue. ‘I wanted my cars to kind of blend in. My house is gray and I kind of wanted them to match the house.’ 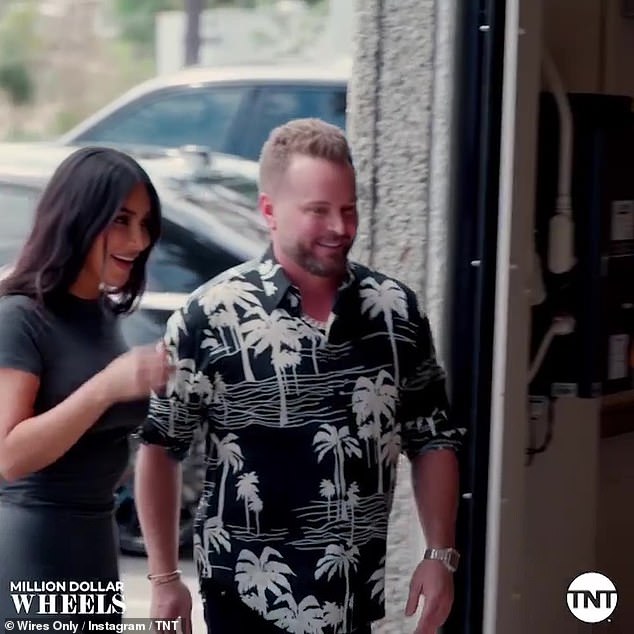 Impressed: A sneak peek for the TNT series shows the ordinarily calm and collected Kim unable to contain her surprise as she lays her eyes on the van for the first time 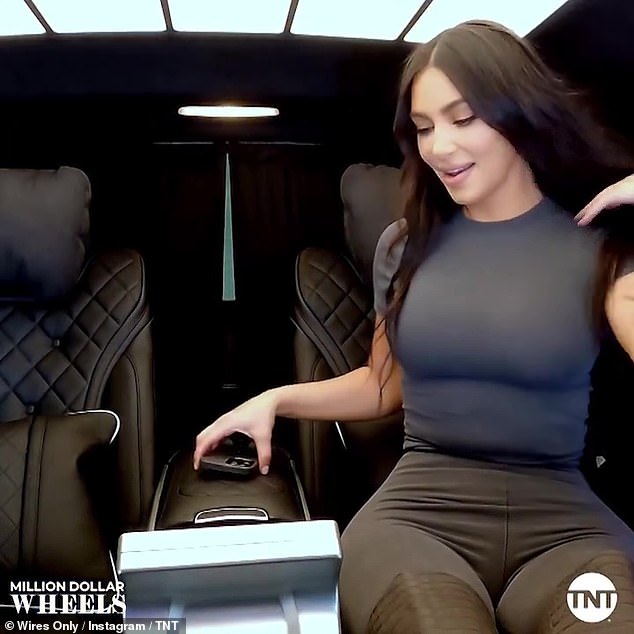 Coming soon: The next episode of Million Dollar Wheels will premiere on TNT Monday 10/9C

The new episode comes amid backlash over Kim’s refusal to cut ties with Balenciaga after the brand included images of children carrying teddy bears in bondage in an ad campaign.

Kardashian, who has been in business with the company for several years, spoke out days after the company had already apologized for the scandal. She is often seen wearing Balenciaga to major events and has featured in several of the brand’s campaigns in the past.

But on social media, users appeared skeptical of Kardashian’s statement which took days to prepare, with many suggesting that it was not sincere and that she was waiting and hoping for things to blow over. Many said that only a complete cutting of ties with the Spanish brand would now be appropriate.

She issued it last night, saying: ‘I have been quiet for the past few days, not because I haven’t been shocked and outraged by the recent Balenciaga campaigns, but because I wanted an opportunity to speak to their team to understand for myself how this could have happened. Kardashian said in a statement on her Instagram page. 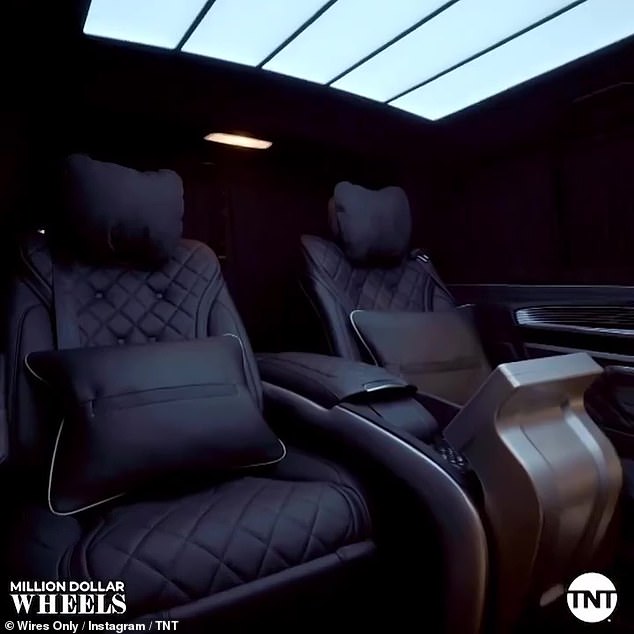 Check it out! Viewers were given a glimpse of Kim’s new ride

Kardashian continued: ‘As a mother of four, I have been shaken by those disturbing images. The safety of children must be held with the highest regard and anything against it should have no place in our society – period.’

She subsequently reissued the statement that saw some of the wording changed using stronger language adding: ‘any attempts to normalize child abuse of any kind should have no place in our society – period.’

However, on balance, Kardashian said that she is comfortable with how the company reacted to the scandal.

‘I appreciate Balenciaga’s removal of the campaigns and apology. In speaking with them, I believe they understand the seriousness of the issue and will take the necessary measures for this to never happen again.’ 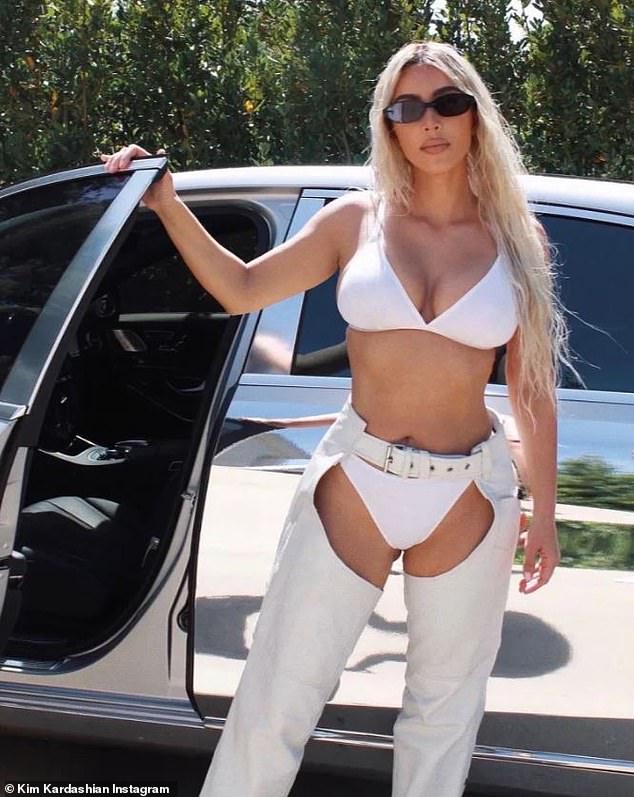 In an additional post, to both Instagram and Twitter, Kardashian said she was reconsidering her relationship with the fashion brand but had not yet many any firm decisions.

‘As for my future with Balenciaga, I am currently re-evaluating my relationship with the brand, basing it off their willingness to accept accountability for something that should have never happened to begin with — & the actions I am expecting to see them take to protect children.’

The sincerity of Kim’s response was further questioned when images emerged of Kardashian staging an impromptu fashion shoot in skimpy hotpants not long before she put out her statement.

‘I don’t believe that you’re being sincere at all. I think you were just hoping that it would blow over. There’s no way that they paid for an ad campaign, didn’t look it over thoroughly before they put it out there. Seems like it’s more about money for you,’ wrote one fan. 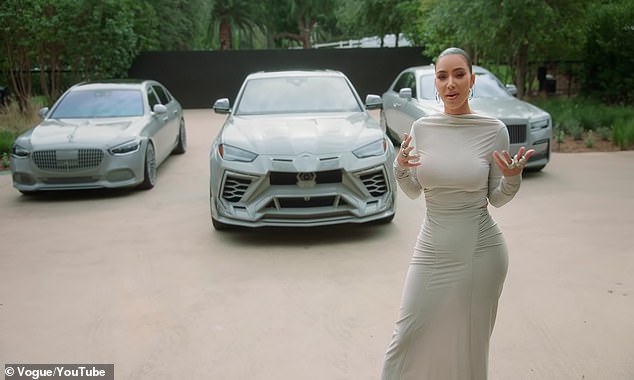 ‘I’ve always been a car girl,’ she previously told Vogue. ‘I wanted my cars to kind of blend in. My house is gray and I kind of wanted them to match the house’

‘You can’t be that outraged if you’re going to continue to model for them I applaud u for speaking up but the fact that this even happened speaks volumes and so publicly at that. Shame on Balenciaga and anyone who still supports them. Things like this don’t deserve a second chance,’ added another.

‘Coming from a fan of you for many years this isn’t good enough. Now maybe you couldn’t of done anything then but you can now cut ties with Balenciaga at least! Ain’t no one forgetting this one there’s no excuse big enough to cover what everyone saw,’ echoed a third.

‘No. They were promoting child sexual abuse. How on EARTH can you say they ‘understand the severity’ and still work with them, especially as a mom?? This shows how sheltered you are. No concept of the impact this has on victims. Disgusting,’ responded one user. 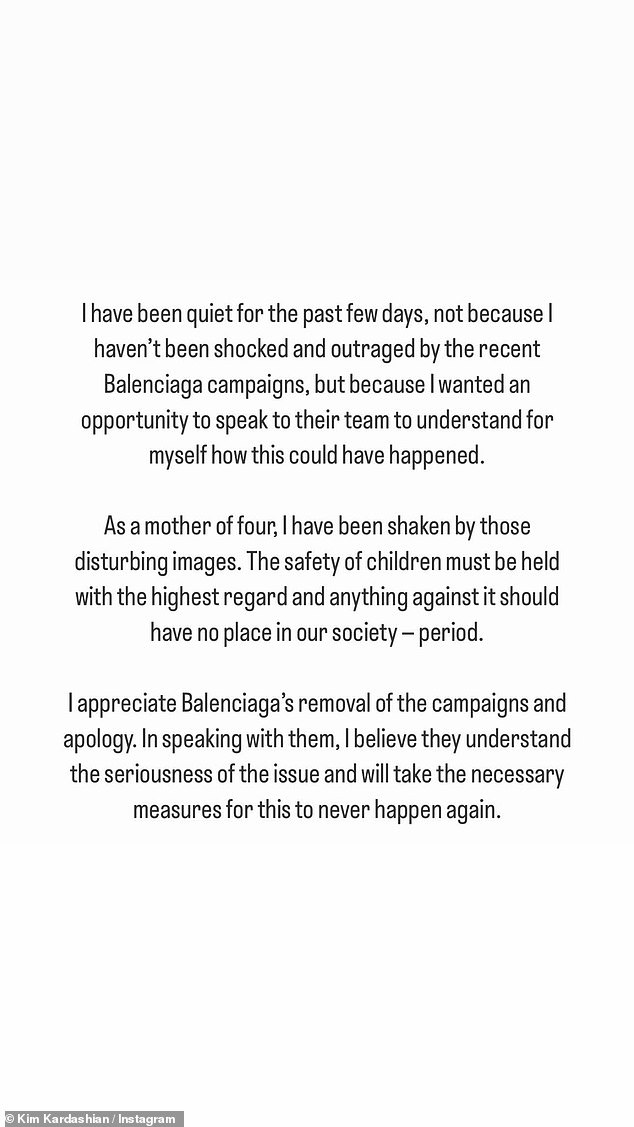 Kardashian’s statement, in which she professed to be ‘shocked’ by what she had witnessed, did not appear to stop her posting for a photo shoot on Saturday night.

Fans appeared to be outraged that Kardashian had not come down firmly against the brand and instead seemed to be taking the temperature from her followers.

Many had sound advice of their own for the multi-billion dollar reality star.

‘I’ve tolerated a lot of s****y & problematic behavior from the Kardashians, but this was the final straw for me. Immediate unfollow & no longer supporting their show, which, let’s face it, is just a giant ad campaign for them and, apparently, their promoting of child sex abuse,’ wrote one Twitter user.

‘Delete this again and come back with the right statement. One that says ‘I am cutting ties with Balenciaga due to the disturbing images in their campaign involving children.’ The only statement that should have been made,’ stated Gina. 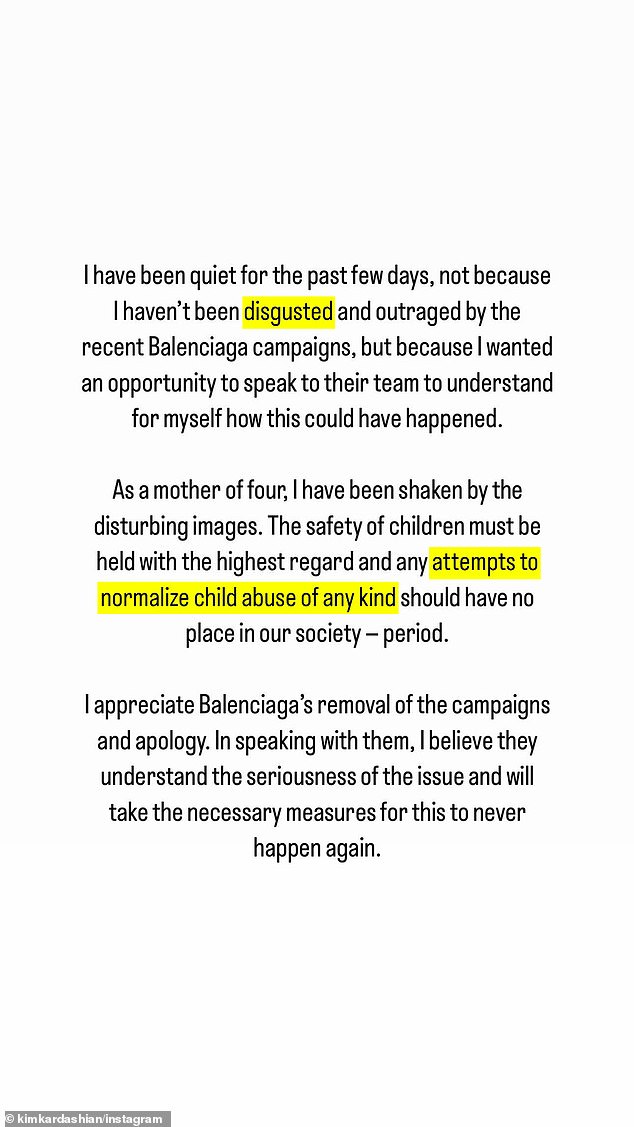 She subsequently issued a second statement that changed some of the wording, noting that ‘any attempts to normalize child abuse of any kind should have no place in our society – period’

‘Kim you don’t need the money from them. The red line has been crossed and as a mother of four and decent human being, you know that. There is no grey area here. Do the right thing and end your relationship with them, otherwise this whole statement is a wash,’ stated Twitter user Gays Against Groomers.

Kardashian is often seen wearing Balenciaga to major events and has featured in several of the brand’s campaigns in the past.

Essentially the fashion face of the company, Kardashian is Balenciaga’s biggest supporter and the brand’s most famous model, appearing to walk on water in the fashion house’s fall 2022 campaign.

She was famously introduced to Balenciaga Creative Director Demna Gvasalia by her ex, Kanye West with the couple’s daughters also sporting the brand, too, having recently been spotted carrying four-figure bags from the brand. 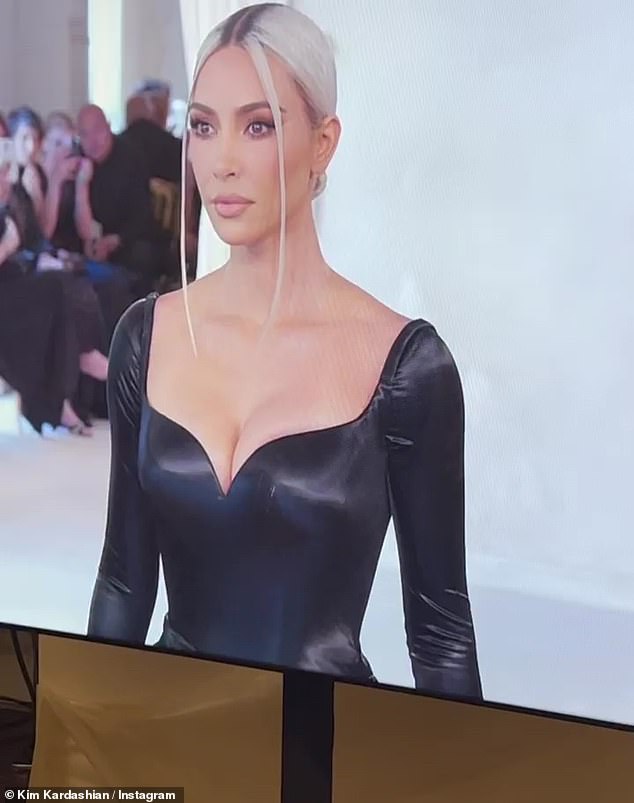 Kardashian is often seen wearing Balenciaga to major events and has featured in several of the brand’s campaigns in the past such as Paris Fashion Week, above

She acknowledged the role her ex-husband had played in the relationship in December 2021 as she spoke at the People’s Choice Awards where she accepted an award for fashion.

‘To Kanye, for really introducing me to the fashion world,’ she said. ‘I fell in love with fashion and I’m so inspired by so many people. But again, this is like a dream that I get to wake up and wear these amazing clothes and try new things and take a risk. I’m so humbled.’

At the time, Vogue described it as ‘the peak of Kardashian’s Balenciaga moment.’

More recently, on the Season 2 finale of Hulu’s The Kardashians which dropped last week, she seen was chatting with head designer Demna.

During the episode she explained how her relationship with Balenciaga started with West, but that it had evolved throughout the years.