A highly venomous king brown snake has punctured a cyclist’s wheel after it lunged for his leg but got a mouthful of rubber instead.

Tyrone Pahh was moving his bike into his garage after a late-night ride in Alice Springs when he stirred a large snake which had slithered under the rolling door.

Mr Pahh was startled by a hissing noise before turning the light on to see a metre-long snake staring up at him, ABC reported.

‘It sounded like a lot of pressure coming out of a tyre … so I thought my tyre was flat,’ he said.

Mr Pahh said that he felt like a big wuss when, after realising it was a snake trying to bite him, he threw the bike down and made a run for it.

‘I think I’m pretty lucky now when I look back on it, especially given what kind of snake it was.’ 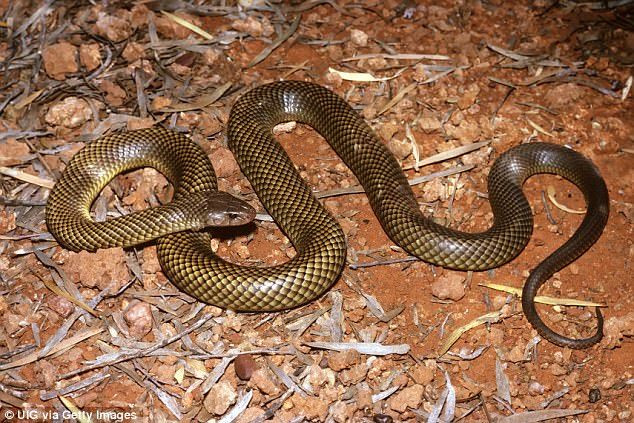 ‘It was a Mulga [king brown] snake, they are highly venomous but it takes you a fair while to die, at least half a day to die,’ he said.

Mr Neindorf was called to the boy’s house and was able to trace venom on the tyre.

He said because the snake had hissed it had let off a warning, after it was likely disturbed by the door lifting up.

The incident comes after Mr Neindorf issued a warning for Alice Spring residents to check their pools for snakes before swimming as the heat entices the reptiles to search for water.

Snakes are definitely migrating, he said.