Harry and Meghan have lost America.

That’s the spectacularly clear conclusion after two volumes and six hours of a mind-numbingly deep dive into the Netflix saga of the world’s most miserable (ex)royals.

Again, I watched, so you didn’t have to.

Strikingly, the criticism is not just coming from loyalists or the old-school, conservative, anti-woke crusaders – it’s the left that is unleashing.

Almost everyone is plugging their ears, covering their eyes, and screaming: Please God, make it stop!

The New York Times reheated the ‘second serving of reviews’ of the Megflix opus. ‘Some critics have had their fill of the couple’s account,’ they write, detailing a laundry list of critics who found it to be ‘grudge-rehashing,’ a ‘gussied-up reality show’ and ‘out-of-touch, self-absorbed and cornier than a Hallmark movie.’

Left-leaning The Atlantic ran the headline, ‘The Cringeworthy End of “Harry & Meghan” on Netflix… The ex-royals insist they’re moving on. Viewers should be so lucky’. Far-left Slate ran the hilarious headline, ‘It’s okay to admit Harry and Meghan are annoying.’

The royally aggrieved couple’s bestie, CBS News anchor Gayle King, who attended Meghan’s baby shower, called the finale, ‘very dicey’. Whoopi Goldberg said she had better things to do than watch it at all. Liberal shock jock Howard Stern was calling them ‘whiny bitches… like the Kardashians but boring,’ even before the series ended.

Harry and Meghan have lost America. That’s the spectacularly clear conclusion after two volumes and six hours of a mind-numbingly deep dive into the Netflix saga of the world’s most miserable (ex)royals.

I could go on and on. But what do ordinary Americans think?

The current ‘audience score’ on the crowdsourced rating site Rotten Tomatoes is 14%. Honestly, it’s hard to find something lower, so I gave up scrolling.

What happened? Not too long ago, it was completely taboo and could get you kicked off US and UK television – see Sharon Osbourne and Piers Morgan – for even questioning Harry and Meghan.

Well, that has clearly come to an end. And I’ll tell you why:

First, no one likes clickbait.

After the infamous Oprah interview and Volume I, everyone was expecting some bombshells. But it was all duds. The most explosive headline from Volume II was that Harry’s brother screamed at him when H&M decided to ditch the family and pursue fame and fortune abroad.

But we’re not told what William said. Harry receives a text from William after the Oprah sit-down, but we don’t know what he wrote.

That’s their style – all tease and no payoff.

We still don’t know the identity of the ‘royal racist’ who allegedly questioned ‘how dark’ their son Archie’s skin would be. We don’t know the details of how Princess Kate allegedly made Meghan cry before the wedding. We have no tangible proof that the royal family is institutionally racist.

This is what I spent six hours of my life waiting for? Instead, we are shown them crying during emotional hypnotherapy sessions – whatever that is.

Not to mention what they put their family through. How trashy to shame your own flesh and blood and for what? It was all smoke and no fire.

Second, and most importantly, Americans want to root for the underdog, but you’ve got to give us something – anything – to root for.

Never once in the entire series did Harry and Meghan show a scintilla of introspection. Never did they ask to be forgiven, or show personal accountability and growth. 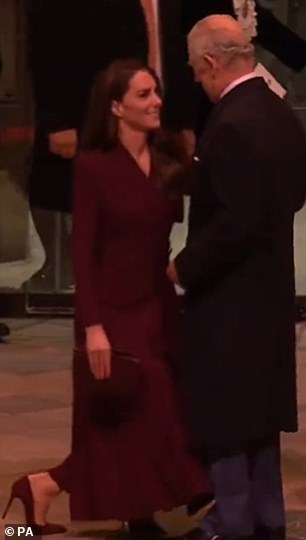 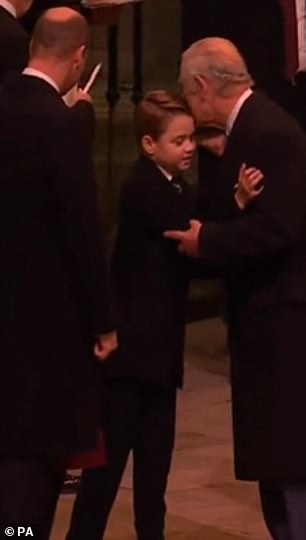 (Above, left) Kate Middleton gives her first ever public curtsey for King Charles while greeting him at a Christmas concert (Right) Charles greets his grandson George at Westminster Abbey

Not to mention what they put their family through. How trashy to shame your own flesh and blood and for what? It was all smoke and no fire.

According to them, there’s nothing they could have done differently. They’re perfect angels, blameless. In their telling, it was the Queen and the rampantly racist royal family who felt threatened by Meghan’s incandescent star power. She’s a super-mega-ultra-star. No one could possibly compete with her and she was punished for it.

Instead of anything resembling reality, we get a front row view into their home in one of the wealthiest areas in America, Montecito, California. It looks like a Nancy Meyers set, impeccably decorated, including one scene where Meghan is sitting on a chair with an Hermes blanket behind her that costs a cool $1,650.

They have horses, chickens, idyllic views of the coast. They ride in black SUV’s with full security escorts. They take refuge in Tyler Perry’s house and on private islands off of Canada, they stay in enormous penthouses in New York City, their dogs fly on private beds in their private planes with their team of assistants and nannies. But there’s nothing redeeming about being ex-royals?

It’s painfully obvious to everyone that they wouldn’t be living this life and Netflix wouldn’t be paying them $100 million if they were not related to Queen Elizabeth. But again, there is no acknowledgement of this at all.

Finally, Meghan and Harry say they’re ready to move on after their gruelling 17 months (oh my!) as working royals. But they’re not moving on, not even a little bit. 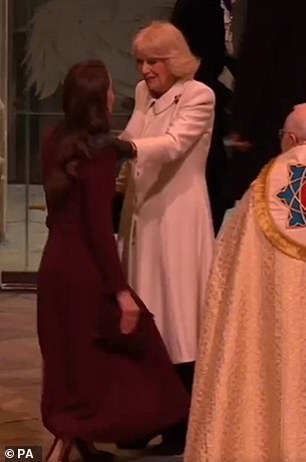 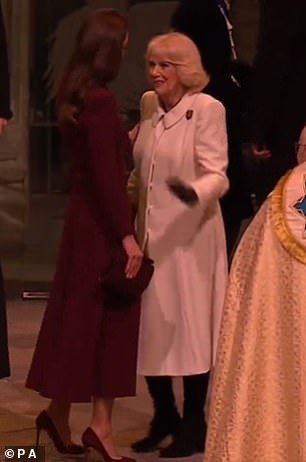 (Above) Kate offers a friendly greeting to the Queen Consort, dipping low before they exchange a few words at the Together At Christmas concert, set to be broadcast on December 24

Harry’s book ‘Spare’ drops in January and Meghan says her podcast series is not done yet. I’m sure both will serve up more painful memories and flimsy cheap shots at their relatives. They are oversaturating the market and they are not evolving. At some point, they are going to have to come up with a new act.

Maybe the greatest mistake that Harry and Meghan made was taking Americans for fools.

But judging from what we’re reading and hearing today – America has moved on, even if they haven’t.