Delighted kitchen fitter discovers a mini bottle of whiskey hidden under the floorboards by previous owners 20 YEARS ago with a note saying: ‘Have a drink on us!’

A kitchen fitter was left gobsmacked after unexpectedly discovering a secret message and present that had been hidden under the floorboards 20 years earlier.

Craig Harrigan, from Perthshire, Scotland, was tearing out a client’s kitchen when he came across a small bottle of Glenkinchie whiskey and a note tucked beneath the floorboards.

The message read: ‘Jack and May lived here – three kids and a dog. Kitchen done up during April/May 2001. All the best, have a drink on us.’ 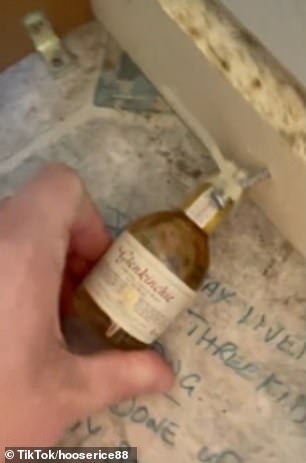 Craig Harrigan (left), from Perthshire, Scotland, was tearing out a client’s kitchen when he came across a small bottle of Glenkinchie whisky and a note hidden under the floor (right)

The miniature bottle had been attached to the wall using a nail and a cable tie, while a sweet message from the previous tenants had been scribbled across the floor.

Sharing the unusual find to TikTok, Craig explained: ‘So we’re stripping out a kitchen and we found a message under the floor.’

Commenting alongside the clip, Craig admitted his initial thought was that 2001 wasn’t ‘that long ago’, until his co-worker revealed that he wasn’t even born then.

Despite the generous gesture from Jack and May, Craig said he wasn’t if he’d brave drinking the whisky after it had lay underneath the floor for 20 years.

He captioned the post: ‘Carrying out essential work! Great find. Not sure I would drink it tbh.’ 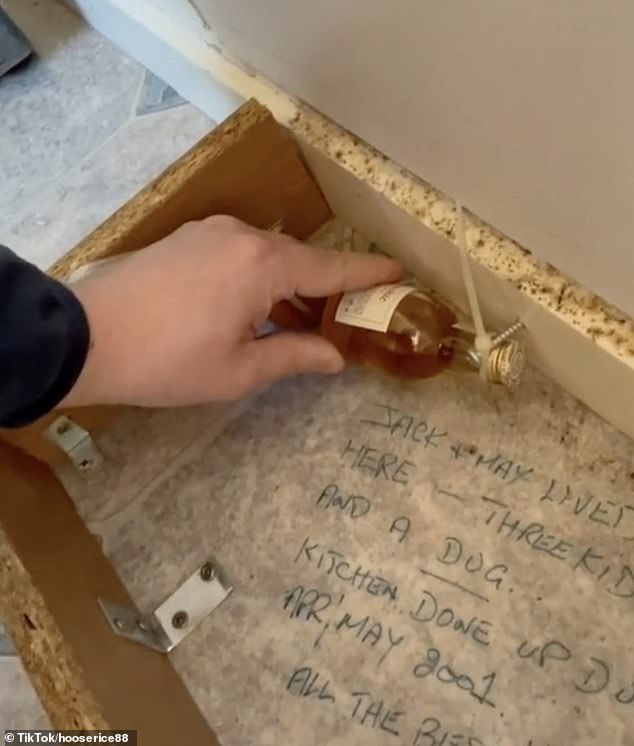 The message, left by tenants 20 years earlier, read: ‘Jack and May lived here – three kids and a dog. Kitchen done up during April/May 2001. All the best, have a drink on us’

His video racked up more than 11,000 views and floods of comments from TikTokers who were blown away by the tenants’ kind gesture, saying it had ‘restored’ their faith in the world.

One person penned: ‘How lovely is that. I might do that when mine eventually gets done!’

While another commented: ‘That’s actually so cute. Like that restores my faith in the world. Probably don’t drink it if you’re using power tools though.’

And a third said: ‘class man. Only in Scotland eh’

Another person even urged Craig to drink the whisky, writing: ‘It’s fine! The seal hasn’t been cracked’

But others did not seem as convinced by the find, as one person quipped that they hoped it was ‘genuine and not a bottle of wee’.

Meanwhile, one person suggested Craig should leave the initial bottle and add his own message, providing another surprise for the next person to discover it.