A tennis star has told his fellow competitors to stop complaining and realise how lucky they are despite dozens of players being forced into hotel quarantine ahead of the Australian Open.

Players including Russian world No. 28 Yulia Putintseva hit out at being made to spend two weeks indoors .

However, Sitak said players complaining about their plight should ‘put some things into perspective’ and realise how fortunate they are when thousands of Australians still can’t get home.

Russian world No.28 Yulia Putintseva is among the players to hit out at the decision to make them go into hard hotel quarantine for 14 days

‘A lot of Australians at the moment cannot get home, because of the restrictions and all that, and we as foreigners, over 1,000 people, we’re here in Australia, we’re going to be competing in a Grand Slam, earning a lot of money,’ he said.

‘We’re still lucky to be here, unfortunate circumstances with the quarantine, but that’s how it is.’

There are about 37,000 Australians stranded overseas because of the weekly cap on international arrivals to reduce the strain on the hotel quarantine system. 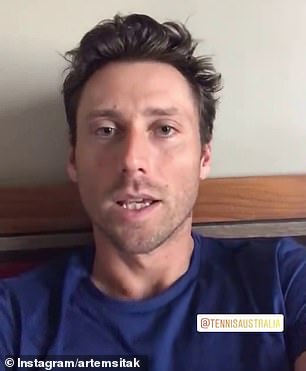 Putintseva had earlier tweeted she had never been told she would have to isolate if one person on-board her flight tested positive to Covid-19.

‘What I don’t understand is that, why no one ever told us, if one person on board is positive the whole plane need to be isolated. I would think twice before coming here,’ she wrote.

Romanian world No.71 Sorana Cirstea meanwhile said she ‘would have stayed home’ had she known about the rule surrounding close contacts on their charter flight.

But Sitak said it was made very clear to players they could be made to quarantine if anyone on their flight came into Australia carrying the virus.

‘We had a call with Tennis Australia about a month ago and not a lot of players were on that call, which was surprising to me,’ he said.

‘They did mention that if somebody tests positive on the flight, it’s going to be up to the health authorities to decide whether to quarantine all the flight or just isolate compartments of the plane.’ 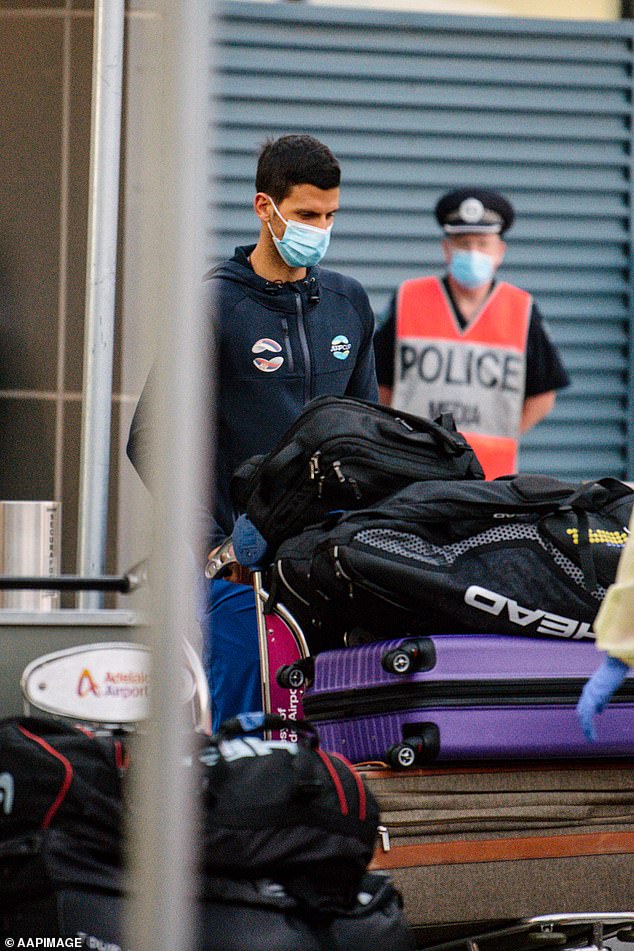 He said it was understandable the whole plane was told to go into quarantine given it was the flight attendant in their case who tested positive.

‘After that call, in my mind, I knew that if for some reason somebody tested positive on the plane, I’m going to have to quarantine for 14 days,’ he said.

‘So I was prepared to take that risk and I knew that was a possibility.’

Covid quarantine commissioner Emma Cassar on Sunday confirmed a member of a broadcast team on an Australian Open charter flight from Los Angeles to Melbourne has tested positive.

A flight attendant and a tennis coach who were on the same flight are also infected with the virus, as well as Sylvain Bruneau, the coach of Canadian tennis star Bianca Andreescu, who entered Australia from Abu Dhabi.

All four people tested negative when they left the US.

There are 62 close contacts on the LA to Melbourne flight and 63 from the Abu Dhabi flight who will spend 14 days in hotel quarantine. 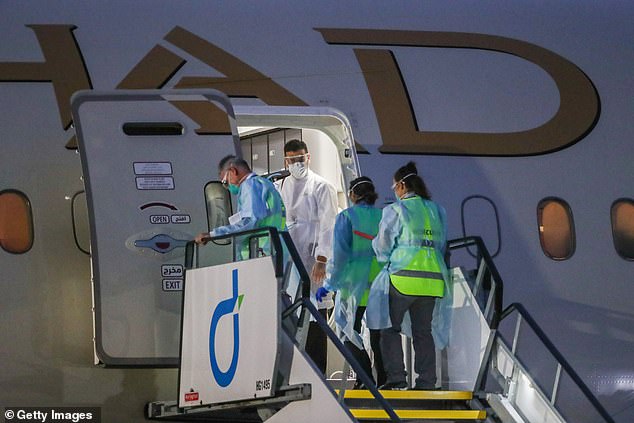 A flight attendant and a tennis coach who were on the same flight are infected with the virus, as well as a second coach who entered Australia from Abu Dhabi

‘We have delayed training (on Sunday) because a number of test results are not in yet. I can confirm that all player and training partner test results are in, but now we are waiting on the rest of the cohorts,’ Dr Cassar said on Sunday.

‘We’re working with Tennis Australia to make sure we can get back on track tomorrow.’

On Sunday night it was confirmed a fifth person on a third flight, from Doha in Qatar, tested positive – forcing yet more players into hard quarantine.

In another blow for the tournament’s hotel quarantine program, the Department of Justice and Community Safety Victoria issued a warning to Tennis Australia about players trying to leave their room.

TA boss Craig Tiley said players will be fined and placed in hard quarantine if they continue.

Ms Cassar said there was ‘zero tolerance’ and Victoria Police have been contacted about the breaches. 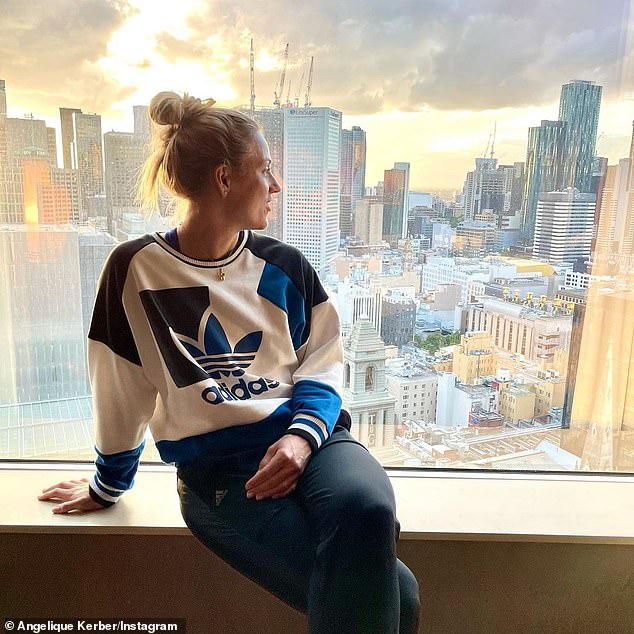 ‘When people come out of their rooms it is not just about, or that they’re wrong, it is placing them and our staff and the community at risk,’ she told the ABC.

‘I can give you two examples, a player who opened his door to try and have a conversation with his training mate down the hallway. Again, he’s got a phone, you can pick up the phone and use the telephone as opposed to putting you and others at risk.

‘The other was another gentleman who shouted some Uber Easts to some other people on the floor and was praising his great efforts and opened his door to do so.

Dr Cassar said despite the incidents being ‘low-level,’ the players’ behaviour is ‘dangerous’ and won’t be tolerated. 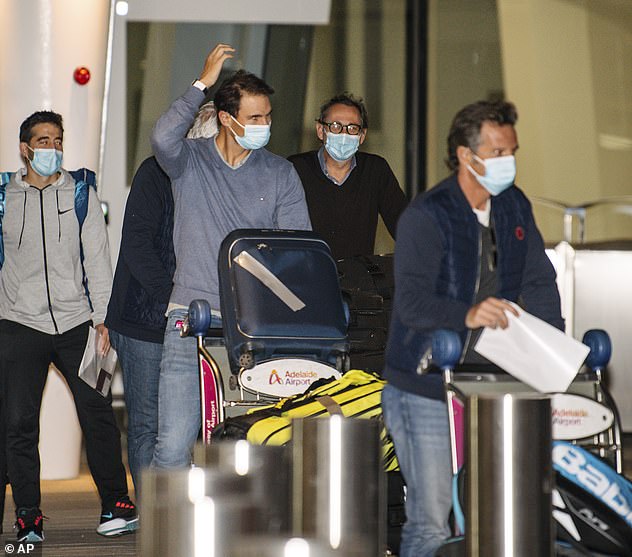 An aircrew member and a non-playing participant tested positive following their arrival on the flight from Los Angeles Friday morning, initially leaving Azarenka among 24 players having to quarantine.

But the situation quickly escalated, with Tennis Australia on Saturday evening confirming another positive Covid test returned from a passenger on a charter flight into Melbourne from Abu Dhabi.

Tennis Australia said no players and support people will be able to leave quarantine to attend training.

‘Players are being supported to access equipment for their hotel rooms to help them maintain their fitness during this time,’ it said.

Players were originally given an exemption to leave their quarantine hotel to train for up to five hours a day, however an email from TA confirmed all who were aboard the flights would now be in hard lockdown. 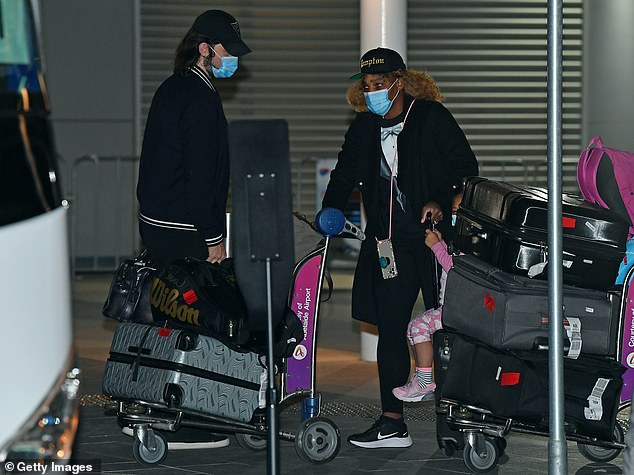 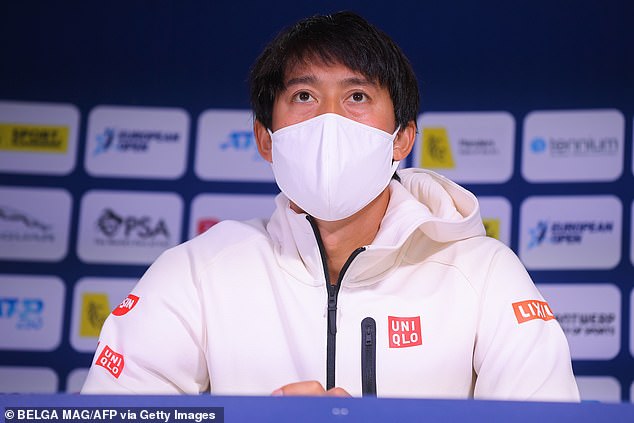 Meanwhile, tennis stars and support staff currently quarantining in Adelaide will be subject to South Australia’s strict coronavirus measures should any test positive ahead of an event later this month, Premier Steven Marshall says.

A host of the world’s leading players, including Novak Djokovic, Rafael Nadal, Naomi Osaka and Serena Williams, flew into Adelaide last week ahead of a one-day exhibition tournament at Memorial Drive on January 29.

They are all in hotel quarantine and have special arrangements in place to allow them to train over the next two weeks.

Premier Steven Marshall says there’s no suggestion any of the players or their support crews have tested positive at this stage.

But he says if they do, they will be moved to Adelaide’s dedicated COVID-19 facility along with other active infections.

‘There is very tight scrutiny around the people who have come into South Australia,’ Mr Marshall said on Sunday.