Urgent warning to Kmart shoppers over ‘exploding’ cookware sold at major retailer: ‘It completely shattered out of the blue’

A mother has cautioned shoppers from buying a popular kitchen steamer from Kmart after one burst open while she was preparing dinner.

The Kmart customer bought an Anko three-tiered steamer at the department store priced at $20.

But one night, while she was steaming vegetables for her family’s dinner, the glass lid abruptly shattered.

‘The lid completely shattered out of the blue and I had to throw away the vegetables as there were glass pieces all over them,’ she told Yahoo News.

‘When it shattered I was stunned and disappointed. But I’m grateful I didn’t have my hand near the lid and the glass pieces didn’t cut me.’

The mother had used the steamer for two months without issue before it broke.

She said she was initially ‘delighted’ to have gotten the steamer for a cheap price but would consider buying something more expensive next time.

The mother added that she wants to ‘warn others’ about the Anko steamer.

It comes after a shopper’s dish from Coles ‘exploded’ into pieces last week.

The customer obtained her dish via Coles’ FlyBuys promotion, which lets loyal shoppers use credits for KitchenAid cookware. 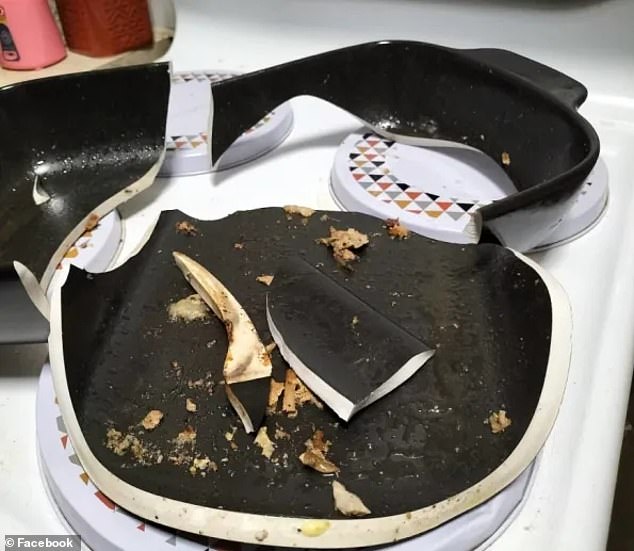 She used the dish to cook a pork roast in her oven but, while waiting in her bedroom for the cook to finish, she heard her oven suddenly ‘explode’.

‘I heard what sounded like a huge bang; I was terrified. I came into my kitchen to see that the dish had exploded in my oven, cracking the glass on my oven door.’

The customer, like the Kmart shopper, has also cautioned others to be mindful of purchasing the dish from Coles.

Coles are investigating the matter.

Daily Mail Australia has reached out to Kmart for comment.