Charles Oakley claims that Knicks owner James Dolan (pictured) ordered him ejected from Madison Square Garden, rather than the Knicks’ claim that Oakley was belligerent

New York Knicks owner James Dolan personally ordered the now-infamous ejection of Charles Oakley during a game in February of 2017, and responded by giving a ‘thumbs up’ to security personnel after the former All-Star was violently removed from his Madison Square Garden floor seat.

Court papers filed Thursday in Oakley’s lawsuit against Dolan and MSG cite new security footage that shows the Knicks owner speaking with a security guard and signalling to security officials before Oakley is approached by an entire security team.

The revelation supports Oakley’s claim that he was not being belligerent, but was ejected because of Dolan’s personal animosity after the former first-round pick was publicly critical of the Knicks.

‘Our legal papers filed today make clear that this matter should be resolved by a jury while also shining a light on Dolan’s conduct that precipitated an event that could easily have been avoided if he had not signaled to his security team to remove Mr. Oakley for no legitimate reason and gleefully give a thumbs up after Mr. Oakley had been assaulted,’ Oakley’s attorney, Douglas H. Wigdor, said in a statement. 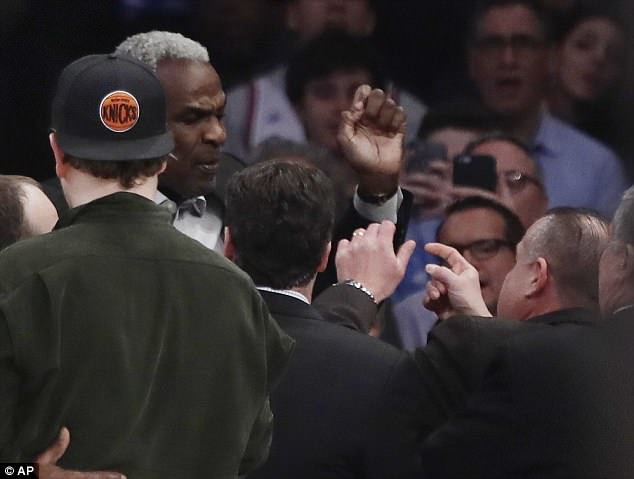 Oakley was initially charged with misdemeanor assault for allegedly striking three male security guards, but those charges were dismissed after the former Knicks star kept his record clean for six months following the incident.

The 54-year-old was banned from the Garden indefinitely, but responded with his own lawsuit, alleging defamation, libel, slander, false imprisonment and other claims.

Oakley’s ban was later reduced to one year.

Following the incident, Oakley accused Dolan of treating him like a ‘common criminal’ by ordering his removal from the game, and launching a ‘coordinated and defamatory’ public campaign against him.

He said this included a tweet in which the Knicks said Oakley ‘behaved in a highly inappropriate and completely abusive manner’ and expressed hope he ‘gets some help soon,’ intimating he was an alcoholic. 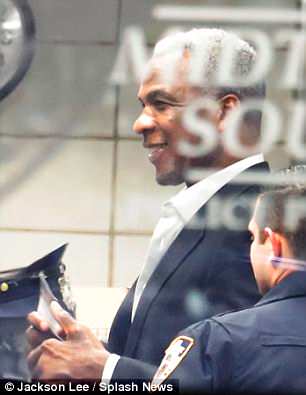 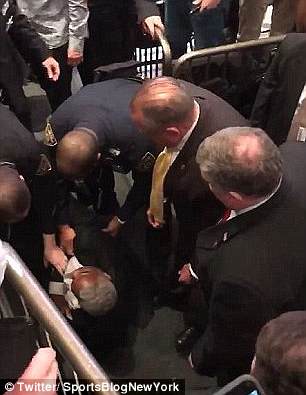 (Left) Charles Oakley cracks a smile after getting processed by NYPD and charged with 3 counts of misdemeanor assault and 1 count of criminal trespassing – charges that have since been dropped. (Right) Oakley falls to the floor while being ejected by MSG security 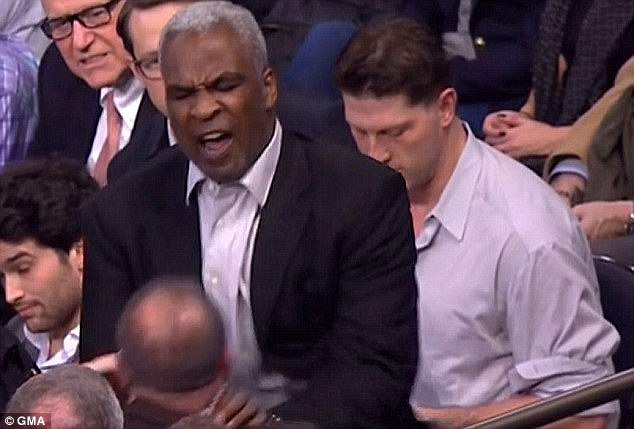 Oakley was seen yelling and even shoving security officials, but he claims he was calm before he was ejected. Dolan allegedly ordered him ejected because Oakley was critical of the Knicks

According to Oakley, he was not being inappropriate or abusive, and his ejection was merely the consequence of his public criticism of the Knicks. 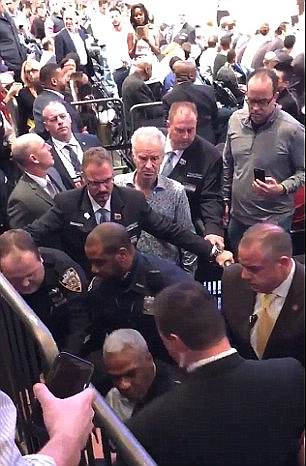 The newly uncovered security footage supports Oakley’s claim, according to his attorney.

‘From the moment he takes his seat Mr. Oakley can be seen laughing and casually interacting with fans. Nowhere is there evidence that he was acting as belligerently as [Dolan and MSG] falsely claim,’ according to the filing Wigdor.

After Oakley is moved to the tunnel, Dolan can be seen giving a ‘thumbs up,’ according to the filing.

‘When the guards were finished assaulting Mr. Oakley and violently ejecting him from MSG, Defendant Dolan can be seen giving a thumbs up to the security guards,’ read the filing.

Dolan and MSG’s version of events has not changed, according to Dolan’s attorney Randy Mastro.

‘We remain confident that this case should be dismissed with or without video review,’ Mastro wrote in a March 30 filing. ‘But now it appears that Oakley himself agrees with our longstanding position that, in deciding this motion to dismiss, Your Honor should review the contemporaneous videos, which depict Oakley repeatedly striking MSG security guards and resisting their efforts with NYPD officers to escort him out of the arena.’