A man has been arrested at a shopping centre in east London this evening after one man was stabbed and another injured as customers reported seeing ‘blood all over the floor’.

Police were called to what is being described as a ‘mass brawl’ at the shopping complex where one stunned customer shared a photo on social media of officers and onlookers surrounding what appears to be a man lying motionless on the floor, as passersby held hands to their mouths in distress.

Hollie Rose said on Twitter: ‘Imagine getting locked in a store in Westfield only to come out to find blood all over the floor and police everywhere, brilliant.’

Police were called to a brawl at the shopping complex where one stunned customer shared a photo on Twitter (pictured) of officers and onlookers surrounding what appears to be a man lying motionless on the floor, as passersby held hands to their mouths in distress

Justin Dealey added: ‘Thought I would come to Westfield Stratford for a change. Within minutes I’ve seen a mass brawl in the shopping centre.’

The Met Police said they were called at around 6.15pm to reports of a fight near Stratford station before they arrested a male on suspicion of grievous bodily harm.

A spokesman added: ‘A male was taken to hospital by London Ambulance Service suffering a stab injury – condition awaits.

‘A second male was found with head injuries – his condition is not thought to be serious. A male was arrested nearby on suspicion of GBH and possession of an offensive weapon. Enquiries into the circumstances continue.’

One shopper, who only wanted to be identified as John, was on his way to meet his children and partner who were buying stationery for the new school year when he saw the man being arrested. 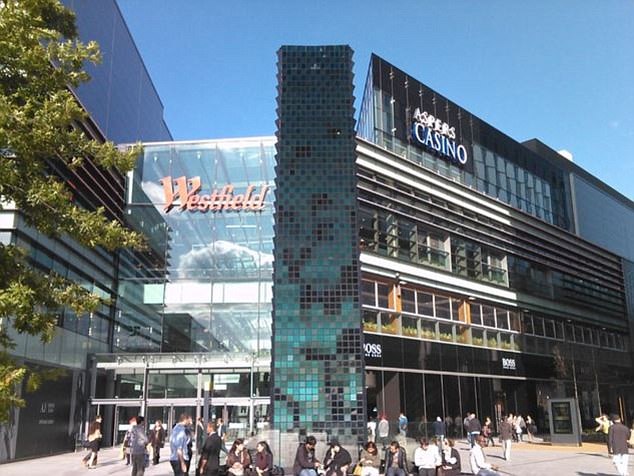 The Met said they were called at around 6.15pm to reports of a fight near Stratford station, near Westfield (file pic) before they arrested a man on suspicion of grievous bodily harm

John, in his 40s, who works in the financial sector in the City of London, told MailOnline: ‘I arrived after work, got off the tube, and arrived to see loads of police at the front of Westfield.

‘I watched someone getting arrested and then went inside the centre and saw someone lying on the ground.

‘There was a menacing, aggressive atmosphere. There were armed police there but I think that’s quite reassuring.’

John added that the violence was not uncommon at the centre, and said it was a ‘failure on the part of the management’ that tonight’s events occurred.

He added: ‘It’s not a particularly nice place. It’s good for shopping but there’s a lot of kids, gangs of youths, hanging about.’

The news comes just a few weeks after a scare when the shopping centre was evacuated in ‘manic scenes’ after a fire alarm sounded just hours before the athletics World Championships began at the nearby London Stadium.