PHILADELPHIA (AP) – Dave Hakstol is more worried about two points than a pretty performance right now. That said, the Philadelphia Flyers coach and his team have some work to do before the playoffs begin.

Travis Konecny scored twice, Claude Giroux had three assists and Philadelphia beat the New York Rangers 4-3 on Thursday night to pick up an important two points and stay atop the wild-card standings in the Eastern Conference.

Jakub Voracek had a goal and an assist and Oskar Lindblom also scored for the Flyers (38-25-12, 88 points), who won for just the fourth time in 12 games to remain within one point of streaking Columbus for third place in the Metropolitan Division. The Blue Jackets beat Florida 4-0 on Thursday for their 10th straight victory.

Philadelphia Flyers’ Travis Konecny (11) reacts after scoring a goal during the second period of an NHL hockey game against the New York Rangers, Thursday, March 22, 2018, in Philadelphia. (AP Photo/Matt Slocum)

Philadelphia is six points in front of New Jersey, which was idle Thursday and owns the second wild-card spot. Florida is seven points back of the Flyers but has three more games remaining than Philadelphia, which has seven contests left.

“We were just sporadic,” Hakstol said. “There are things we have to clean up and do a little bit better, but the bottom line is the two points at the end of the night.”

Jesper Fast had two goals and an assist and Mika Zibanejad also scored for the Rangers, who are playing out the string after being active sellers at the trading deadline.

“I thought there was a lot of fight and compete in our team tonight,” Rangers coach Alain Vigneault said.

With the Flyers’ top two goalies sidelined by injury, and Petr Mrazek, who Philadelphia acquired to fill in, ineffective of late, Hakstol went with little-used rookie Alex Lyon. In his 10th career game, Lyon made 33 saves to improve to 4-2-1.

Lindblom scored eight seconds into the third period to give Philadelphia a 4-2 advantage. Nolan Patrick took the initial shot, and the rebound fell in front to the rookie Lindblom, who backhanded in his second goal.

“We did a good job of grinding it out,” Giroux said.

Fast scored a similar goal for the Rangers, backhanding a rebound of Rob O’Gara’s shot 1:14 later to make it 4-3. It was the second goal of the game for Fast, who extended his point streak to seven games (three goals, six assists).

Lyon’s best save came with 13 ½ minutes remaining when he robbed Chris Kreider with a lunging stop with his right shoulder. He also made an excellent save with 12 minutes left in the second period on Zibanejad’s 2-on-1 chance.

Rangers rookie Alexandar Georgiev started in goal in place of Henrik Lundqvist (neck/back), who was injured with five minutes left in Monday’s 5-3 loss to Columbus. Georgiev made 32 saves.

Voraeck muscled through three Rangers to break a 1-all tie 3:46 into the second period, shooting high over Georgiev’s glove.

Konecny scored his second of the night on a deflection of Radko Gudas’ shot from the point with 11:22 left in the second to put the Flyers up 3-1.

But the Flyers’ second-year forward found himself on the bench for the last 7:20 of the contest because Hakstol didn’t like the way Konecny was protecting the puck.

“Individuals have to be better in how we manage the puck,” Hakstol said.

Fast pulled the Rangers within a goal with 2:57 remaining in the period when he sent the puck toward the net from the corner and it deflected off defenseman Ivan Provorov and past Lyon’s left pad.

Konecny netted his 21st of the season, a wrist shot from the slot past Georgiev’s glove side, to give Philadelphia a 1-0 lead 7:56 into the contest.

Zibanejad continued his recent hot streak and tied the game at 1 with 6:07 left in the first when he got in alone on Lyon and beat him through the five-hole to extend his point streak to six games (7 goals, 3 assists).

NOTES: Injured Flyers goalies Michal Neuvirth (lower body) and Brian Elliott (core muscle surgery) did drills during Thursday’s morning skate. Neuvirth is aiming to return during the Flyers’ upcoming three-game road trip while Elliott is about two weeks from returning. … Provorov played in his 157th straight game to start his career, breaking the club record for most consecutive contests by a Flyers newcomer. … The teams wrap up the season series in the regular-season finale for both on April 7 in Philadelphia. The Flyers lead the series 2-1. 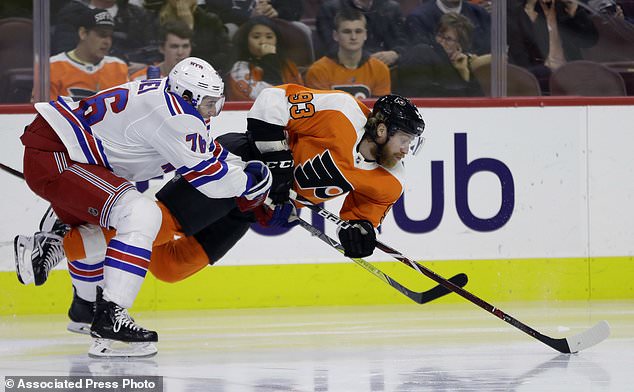 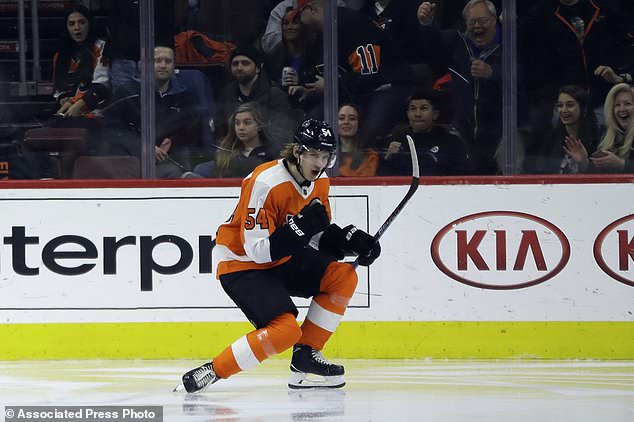 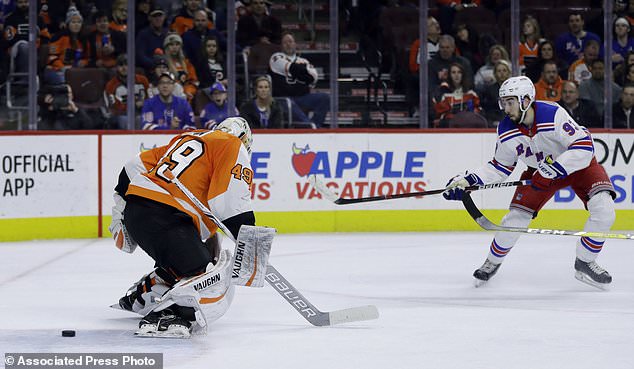 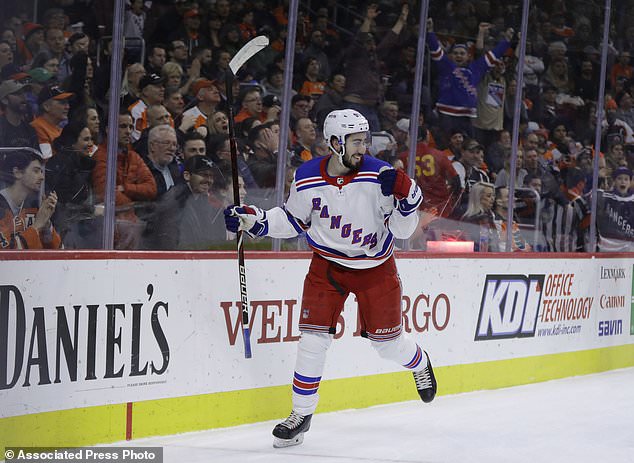 New York Rangers’ Mika Zibanejad (93) celebrates after scoring a goal during the first period of an NHL hockey game against the Philadelphia Flyers, Thursday, March 22, 2018, in Philadelphia. (AP Photo/Matt Slocum) 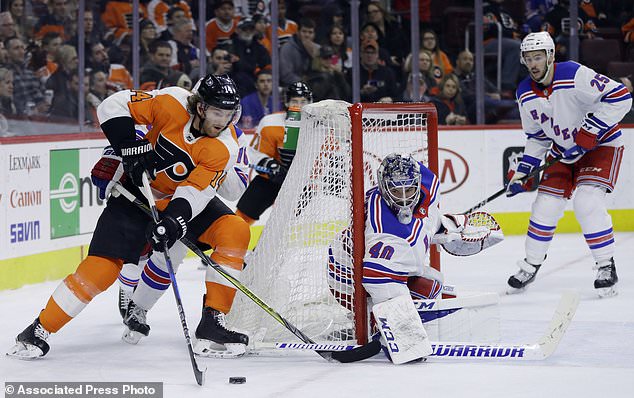