Korea tensions over claims that warship was sunk by torpedo

Korea tensions over claims that warship was sunk by torpedo

A South Korean navy ship was sunk yesterday in what was feared to have been a torpedo attack by a North Korean submarine.

Several of the 104 crew were killed and others were missing last night.

The drama, close to the disputed sea border between the two Koreas, raised concern that growing tensions between them could escalate into conflict.

North Korea had earlier threatened ‘ unprecedented strikes’, including nuclear attacks, against its neighbour and the U.S., claiming they were planning to topple the regime of Kim Jong-il.

Relations between the two have also come under strain recently with disputes over cross-border tourism and a joint economic zone.

There are fears in the South that the North is becoming increasingly erratic and dangerous.

As ships and helicopters searched the scene of the sinking for survivors last night, South Korean President Lee Myung-bak convened an emergency meeting of security ministers in Seoul.

The incident happened in the Yellow Sea near Baeknyeong Island, the westernmost point of South Korea and a key military post.

The South Korean ship, the 1,200-ton corvette Cheonan, was on a routine patrol when it was hit by an explosion close to its stern.

There were reports that it had earlier fired warning shots at an object to the north.

But South Korean officials played down the initial reports of military action, saying they had no evidence of North Korean forces in the area.

They said the Cheonan could have fired its warning shots at a distant flock of birds which had produced an image on its radar.

Senior government officials later told South Korean media the ship could have struck a rock or been hit by an explosion on board.

Six naval ships and two coastguard vessels rushed to the scene and the defence ministry said later that 58 of the corvette’s crew had been rescued. Two had to be airlifted for emergency medical treatment.

North Korea warned recently that it was increasing its defences in response to joint South Korean-US military exercises earlier this month. It had declared four naval firing zones near the sea border, deploying multiple rocket launchers. Two of the zones are in the Yellow Sea. 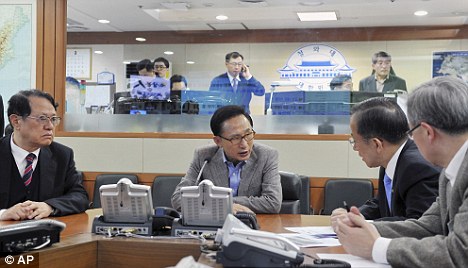 Action: South Korean President Lee Myung-bak, centre, talks with officials today after the sinking of one of the country’s naval ships

North Korea has never recognised the sea border drawn unilaterally by the U.S.-led United Nations Command at the end of the 1950-53 Korean War.

Last November the two navies fought a brief gun battle that left one North Korean sailor dead and three others wounded. A North Korean ship was left in flames.

In January North Korea fired artillery into the disputed zones at a time of mounting international pressure to re-start talks over its nuclear ambitions. Some analysts say the firing zones  –  and recent escalation of military activity  –  may be a way of strengthening its hand in any talks.

In 2002, the then U.S. President George Bush named North Korea in an ‘axis of evil’ alongside Iraq and Iran. But the Pyongyang regime was defiant and the following year claimed it had enough plutonium for nuclear bombs.

In 2006 North Korea test-fired a long-range missile and last year claimed it had carried out an underground nuclear test, prompting protests from the U.S., Russia and China. 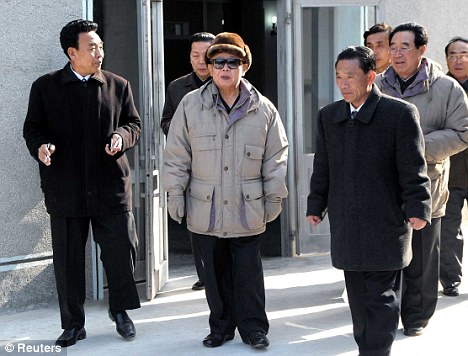 KOREA, HALF A CENTURY OF CONFLICT

At the end of the Second World War, Korea was a united country under Japanese occupation.

But after Japan’s defeat, the island was effectively split with Soviet troops occupying the north and American forces in the south.

The stage was set for a long-running and bitter confrontation between the capitalist west and the communist forces of Russia.

In 1948, leaders in the north proclaimed the Democratic People’s Republic of Korea and the Soviets withdrew. Two years later, the south declared independence. North Korea invaded.

Hostilities finally ceased when the two sides agreed to a three-mile buffer zone between the two states.

But despite the ceasefire, sporadic hostilities continued , the two tiny countries fighting a bitter offshoot of the Cold War in a remote and neglected corner of the world. 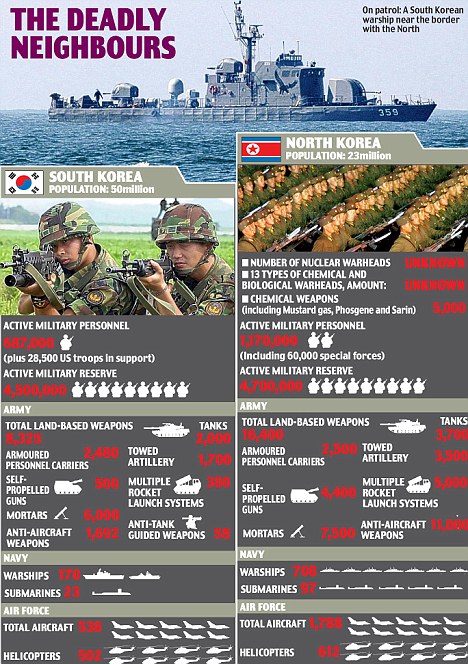 The south – propped up by the Americans – thrived. However, the north has had a far rockier history.

Whereas his father had abided by the terms of the 1953 ceasefire, his successor reneged.

In 1996, against a backdrop of devastating famine, Kim Jong-il announced he was sending troops into the demilitarised zone

In 2002, George W Bush named North Korea as part of an ‘axis of evil’ alongside other ‘rogue’ states such as Iraq and Iran.

But Kim Jong-il was not deterred. Instead, Pyongyang made regular announcements on its arsenal and in July 2003 claimed it had enough plutonium to start making nuclear bombs.

Pyongyang, however, claimed the rocket under scrutiny was carrying a communications satellite.

Later last year, the country admitted it had carried out its second underground nuclear test, prompting protest from the US, China and Russia.

And while the nuclear brinkmanship continued, there were regular spats with South Korea over border incursions and hostile intent.

The sea boundary has been the cause of particular tension in the last few months. South Korea claims the north has designated four areas as military firing zone and deployed four rocket launchers close to the sea in response.

Although South Korea still recognises the Northern Limit Line, which was drawn up in 1953, the north has never accepted the boundary.