A baker has created an epic puff pastry stuffed with vanilla cream cheese – and it’s surprisingly simple to make.

The recipe was shared on the ‘Cooking Tree’, a Korean YouTube channel with 3.6million subscribers that specialises in unique and decadent desserts like caramel milk pudding, chocolate tiramisu cake and Oreo churros.

The pastry is made from simple ingredients – butter, sugar, flour and eggs – while the filling is just a mixture of cream, vanilla bean paste and cold cream cheese beaten together.

Dough should be baked on a high temperature of 190 degrees Celsius for roughly 13 to 15 minutes, before lowering the oven to 160 degrees for another 15 minutes. 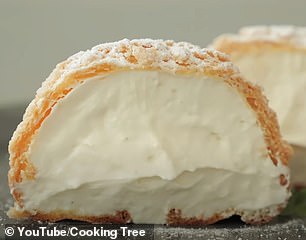 Fans of Korean YouTube channel ‘Cooking Tree’ were delighted with this epic puff pastry stuffed with vanilla cream cheese, which is surprisingly simple to make

This prevents the pastry from sinking and shrinking as it’s taken out, which is one of the most common problems encountered by bakers.

A video showing the making of the dessert has racked up more than 1million views and almost 1,000 comments, with fans praising its simplistic indulgence.

One woman branded it ‘a hypnotising masterpiece’.

‘I made these today and oh…my…god – they were AMAZING!’ another replied.

‘I filled them with the cream cheese filling and some raspberries which made them even more delicious.’ 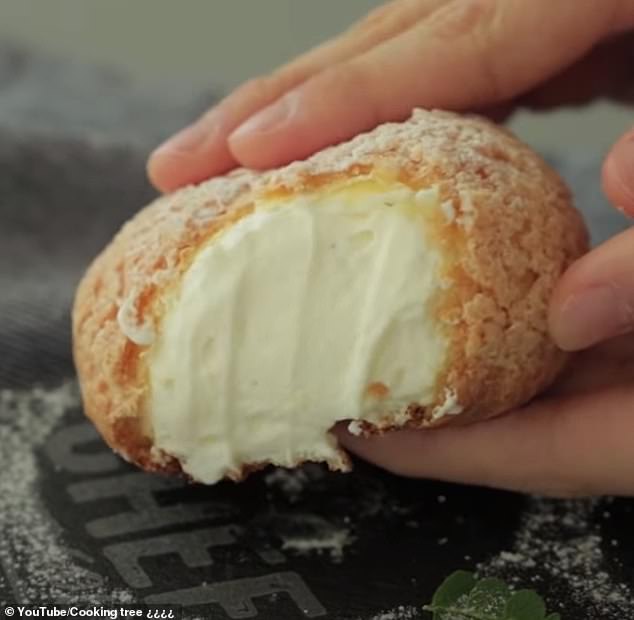 A video showing the making of the dessert has racked up more than 1million views and almost 1,000 comments, with fans praising its simplistic indulgence

‘I’m on a diet and when I am on a diet I always end up watching these types of videos,’ a third wrote, followed by a line of sad faces.

Others encouraged the founder of the YouTube channel to open her own bakery, saying she would be ‘guaranteed’ to have customers out the door.