Kourtney Kardashian has revealed her typical everyday diet as well as the foods she tries to avoid as the mother-of-three embarks on the keto diet.

The 40-year-old reality TV star revealed that she was beginning the ketogenic diet – an eating plan that consists of eating less carbohydrates and more fats – for the second time on her lifestyle website Poosh.

She outlined what she typically eats in a day, as well as the foods she avoids, as she said she ‘never looked better’ than when she adopted the diet two years ago.

Fit! Kourtney Kardashian, pictured recently, has revealed that she is embarking on the keto diet – a low carb, high protein diet – for the second time 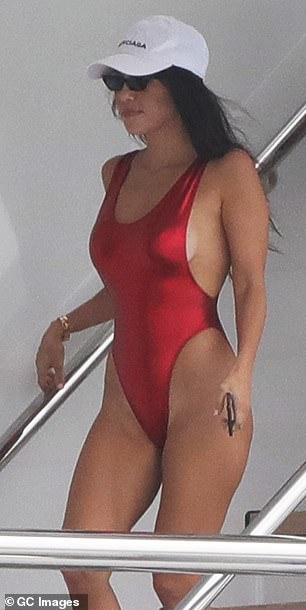 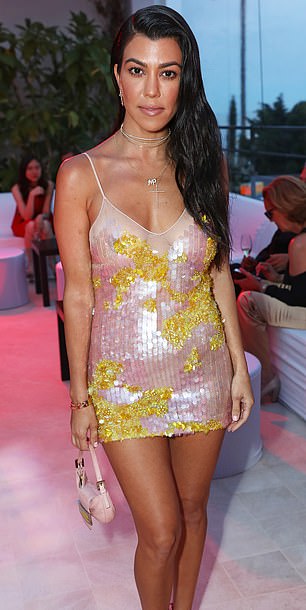 Confident: The 40-year-old (pictured around the time she did the diet for the first time in 2017) said her body has ‘never looked better’ than when she stuck to the keto diet

Her blog post began: ‘Sweet summertime is finally here. The sun is up, the sky is blue, and the kids are out of school.

‘We wait all year for summer, and when it finally rolls around, I want to look and feel my best,’ she added.

The Keeping Up With The Kardashian star explained that she thinks her body has never looked as a good as it looked when she did the keto diet two and a half years ago.

She explained: ‘In my experience, I’ve found the best method to train my body to curb sugar cravings, burn fat, and kick-start weight loss is by sticking to a keto diet.’

According to Medical News Today, the keto diet refers to a ketogenic diet, which is a high-fat, adequate-protein, low-carb diet.

The main goal of the food plan is to get more calories from protein and fat than from carbs.

It works by depleting your body of its store of sugar, so it will start to break down protein and fat for energy, causing ketosis.

Ketosis is a metabolic process that involves fat providing most of the fuel for the body, rather than energy coming from foods eaten.

Kourtney explained that she wanted to get back into the diet as she has been ‘treating’ herself lately, and she wants to get ‘back on track’.

She said: ‘Everybody is different, so I suggest consulting a doctor before jumping into new eating habits. I wanted to share why I’m restarting my keto journey and how I make it work for my lifestyle.’ 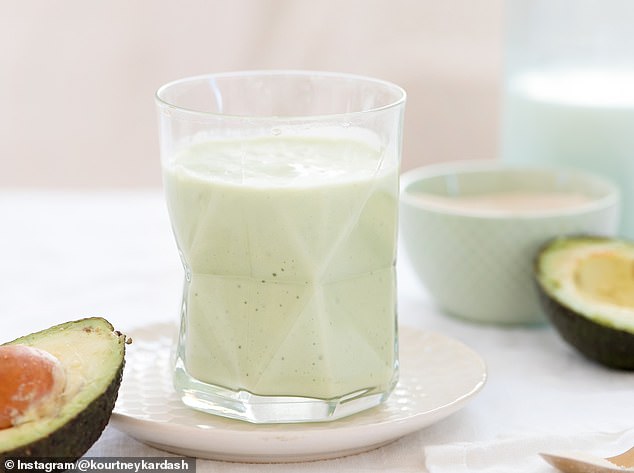 Meal plans: She explained that for breakfast she has an avocado smoothie, while for lunch she usually has a ‘protein-based’ salad with turkey, a base of mixed greens, and egg whites 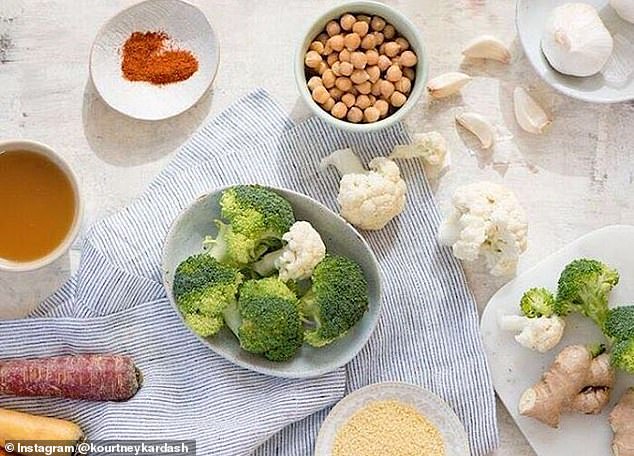 Nutritious: She said she keeps her dinners simple, usually eating chicken or salmon, with either cauliflower rice or broccoli rice 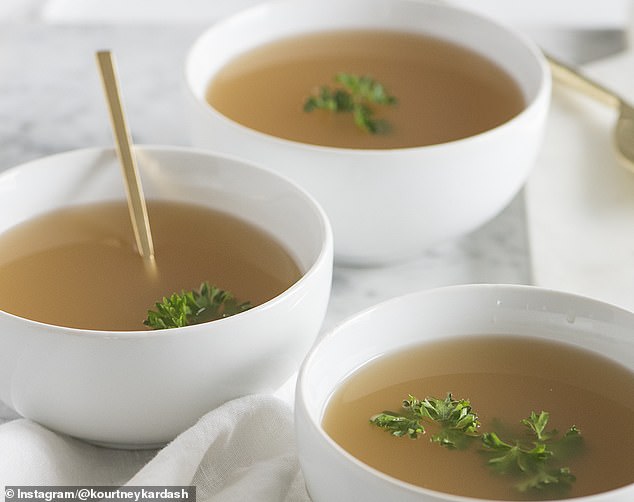 Snacks: Although she says she tries not to snack between meals while on the keto diet, she says she has green tea or bone broth if she wants a ‘boost’

The 40-year-old said she first started the diet a few years ago when her doctor advised her to try it for a ‘metal detox’.

‘He tested my muscles and found that I had high levels of mercury and lead in my system. He let me know that one of the fastest ways to detox was to keep my body in a state of ketosis,’ she said.

Lunch: Salad with turkey, a base of mixed greens, and egg whites

Dinner: Chicken or salmon with cauliflower rice or broccoli rice

‘I had a really positive experience the last time around and wanted to restart my routine this summer.

‘It’s definitely a more restrictive eating plan, but I found that once I knew the ground rules, I was very strict and really stuck to it.

‘My plan this time is to eat minimal carbs and no grains, beans, or legumes. I’m focusing my meals on fresh vegetables and lean proteins.

‘I eat three meals a day with no snacking in between if possible,’ she added.

She explained that for breakfast she typically has an avocado smoothie, the recipe for which she shared on her website.

However, she substitutes manuka honey and dates with ‘a couple drops of Stevia,’ which is more suitable for the keto diet.

For lunch, Kourtney said she eats a ‘protein-based’ salad with turkey, a base of mixed greens, and egg whites.

She keeps her dinners simple, usually eating chicken or salmon, with either cauliflower rice or broccoli rice. 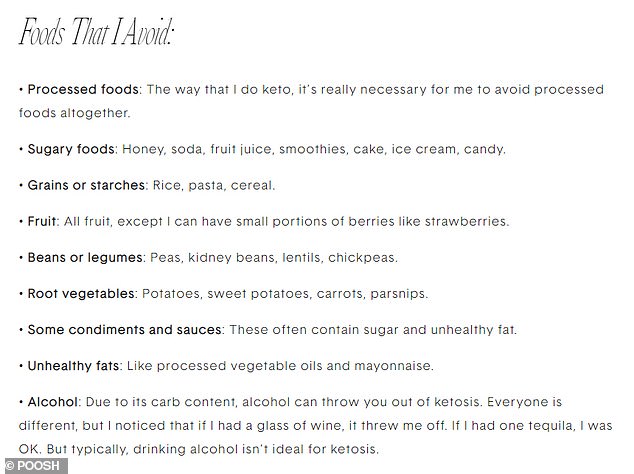 Avoid: Kourtney listed some foods that she tends to avoid while on the keto diet, including processed foods, fruit, grains or starches and alcohol 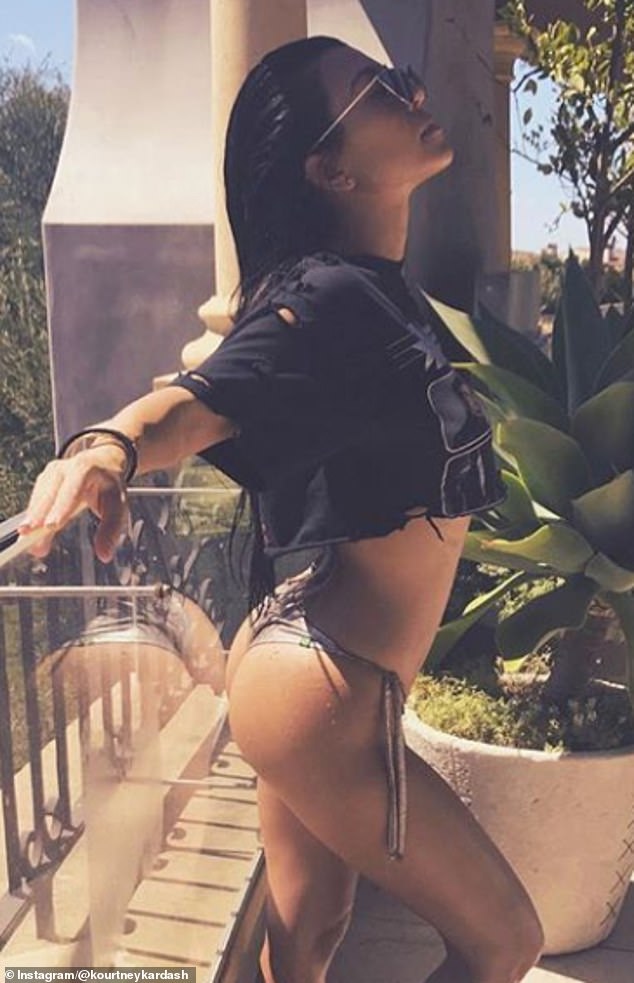 Kick start: ‘I had a really positive experience the last time around and wanted to restart my routine this summer,’ Kourtney said 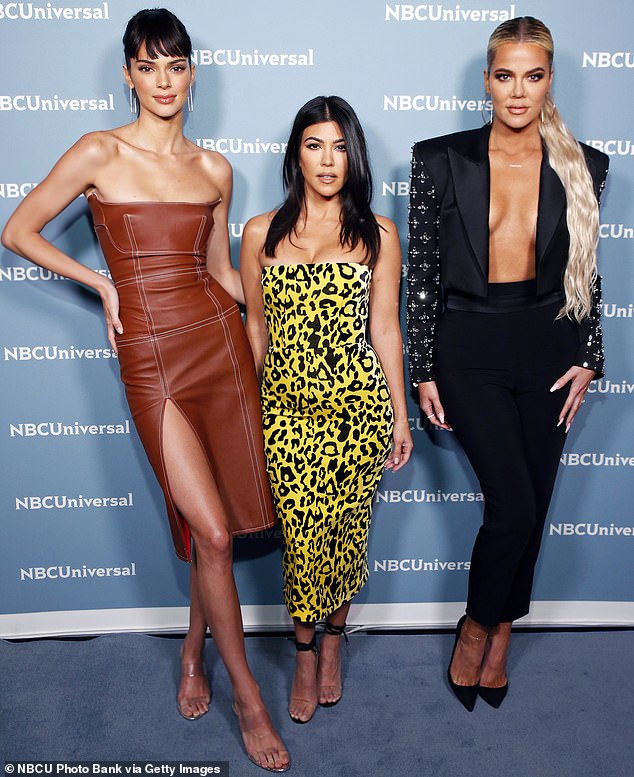 Feeling good: Pictured last month with sisters Kendall (L) and Khloe (R), Kourtney said she has been ‘treating’ herself lately, and she wants to get ‘back on track’

Although she said she tries not to snack between meals while on the keto diet, she said she will have green tea, bone broth or nuts to give her a ‘boost’ if she needs it.

She said she avoids a number of different foods, including those that have been processed and those that are ‘sugary’, including ‘honey, soda, fruit juice, smoothies, cake, ice cream, candy.’ 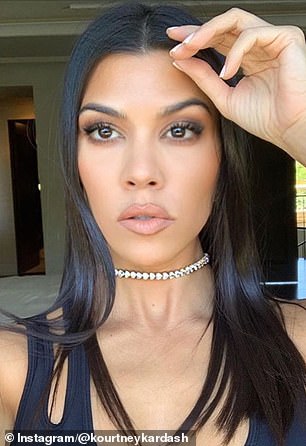 Back to normal: She said she will do the diet for about one month before returning to her regular lifestyle with her three children

Kourtney also steers clear of grans and starchy foods like rice, pasta and cereal, as well as fruit. She said the only fruit she allows herself to have is ‘small portions of berries like strawberries.’

She also avoids beans, legumes, root vegetables like potatoes and carrots, as well as some condiments and sauces which she says can often contain sugar and unhealthy fat. Similarly, she avoids processed vegetable oils and mayonnaise.

Finally, the mom-of-three revealed she avoids alcohol on the diet.

‘Due to its carb content, alcohol can throw you out of ketosis,’ she said.

‘Everyone is different, but I noticed that if I had a glass of wine, it threw me off. If I had one tequila, I was OK. But typically, drinking alcohol isn’t ideal for ketosis,’ she added.

And although Kourtney is embarking on the diet to kick start her summer, she admitted that she will most likely conclude the diet after one month.

‘I know after the month is up, I will most likely go back to my regular lifestyle, especially during summer with my kids. It’s all about balance,’ she said.