Kyle Edmund is firing on all cylinders

Fredrik Rosengren has been the hidden impetus behind Kyle Edmund’s run to the last eight of the Australian Open, a dose of unlikely Swedish hyperactivity counterbalancing the young Yorkshireman’s unassuming nature.

Not long after Edmund had calmly staged another comeback to beat Italy’s Andreas Seppi and set up a meeting with world No 3 Grigor Dimitrov, his coach was enthusing about his charge of the last few months. 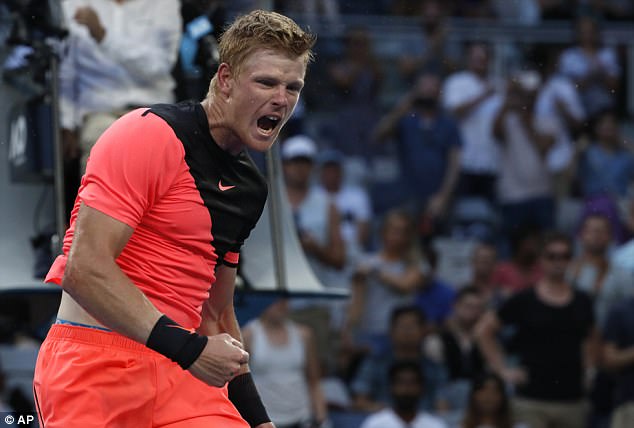 A force of nature, Rosengren is not what you might expect from a country which produced, most famously in tennis, Bjorn Borg. ‘I am very intense! I am so much into it,’ he cackled, perching on a stool in the players’ restaurant.

Whatever it is, their combination seems to be working. Edmund is now the first British man not named Andy Murray to make this Grand Slam quarter-final since John Lloyd in 1985. Remarkably, with the contribution of Jo Konta, it is the ninth year in succession that Britain has had someone in the singles quarter-finals here.

Suddenly Edmund is believing in himself and winning tight matches. He came from a set and a break down to beat Seppi 4-6, 7-5, 6-2, 6-3 and must now tackle the supremely talented Bulgarian, who ousted Nick Kyrgios from the same fourth-round stage in four sets. 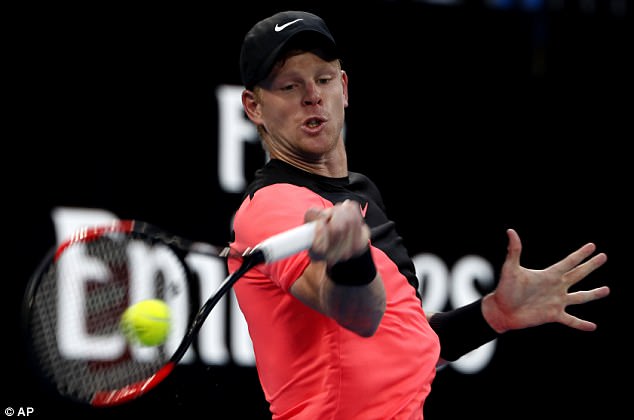 Edmund played Dimitrov earlier this month in Brisbane, in a match best remembered for the Bulgarian sportingly vaulting the net to assist his opponent when the Briton badly turned his ankle and collapsed. That day, the favourite won 6-4 in a deciding set.

But Rosengren had an inkling that the 23-year-old from the East Riding was on the cusp of a big improvement because he was shedding his natural inhibitions.

‘For me tennis is a mental game, it’s all about belief at this level. You have to manage the pressure, or certain points you have to step up and play well. I heard this was not his strength in the past. 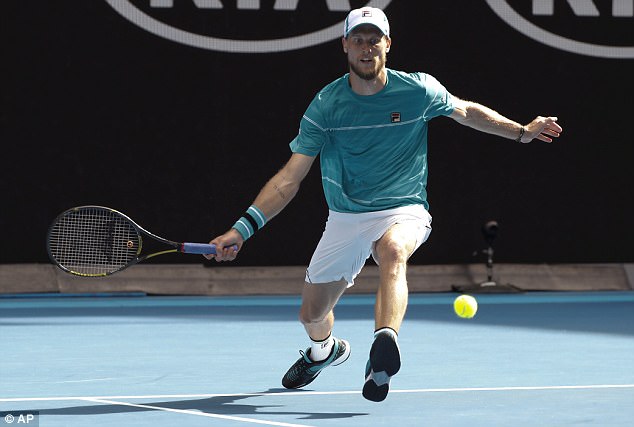 Seppi carefully plotted a way through the first set, eventually winning a tie-break 7-4

‘So we are talking a lot about this — to play to win, not to play to avoid losing, to have the heart. You will not win every time but you have to go out there and get it because these guys will not give it to you for free.

‘You must believe you can do it in tough situations, serving out sets and matches. He has done that three times here.

‘These last three matches were maybe matches he should win, and this can be even tougher when everybody is saying, “Great draw, you make the quarters”, and he knows he has a great chance. It was all about handling the pressure.’ 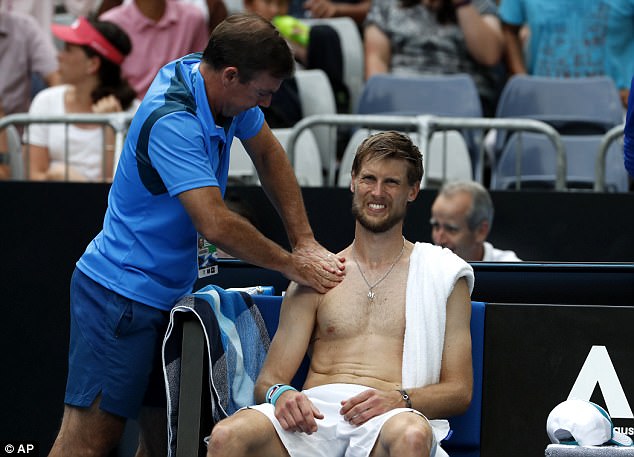 Rosengren (known as Fidde) and his British co-coach, Mark Hilton, have worked on Edmund’s body language, which has not always matched the natural violence of his shotmaking.

‘He should express himself on court but at the same time he can’t use all his energy, it has to come natural. He shouldn’t do this because of me — “I have to show this because Fidde wants me to” — you must not lose your focus on how to play.

‘He is a young man who knows what he wants. He has really good behaviour, but sometimes he could get his hair cut a bit more (this is illustrated by Rosengren messing up his own hair). We say that in Sweden when everything is too nice.’ 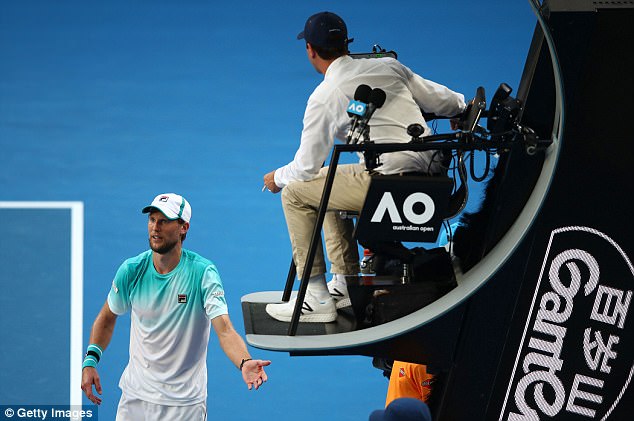 Rosengren is confident his player will have energy left to mount a credible challenge to Dimitrov: ‘It’s all about the mindset. He is not that tired, it’s all about the mental thing to recover. You have to play seven matches if you want to win this tournament.

‘If you’re not prepared for that why come here? You have to be fit for that.’

The Swedish coach stresses the contribution of Edmund’s fitness coach, Ian Prangley, and that of Hilton, who has worked on getting him to push harder with his legs into his service motion.

The results were again evident against the classy Italian, who had 25 aces pounded past him, often at the most vital moments. 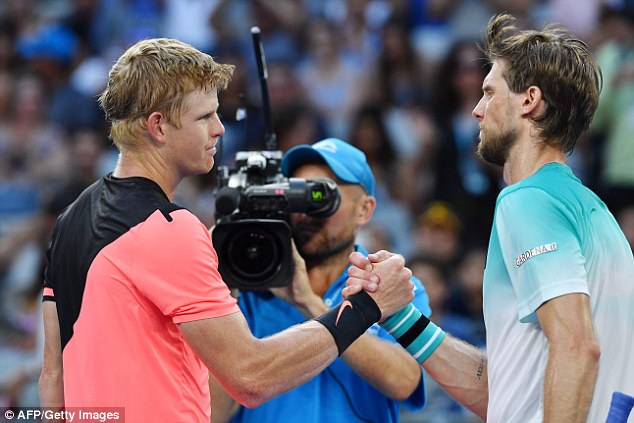 Edmund is aware that he ran Dimitrov close before that nasty fall in Brisbane, which was mercifully not as serious as first appeared.

‘It was similar conditions and not long ago. I played well; he played well. There is a lot of things I did well so we can take things from it,’ said the British player.

He is still bemused by the inevitable questions about whether he feels a burden of carrying the mantle so often held by Murray: ‘Logically, I don’t understand the question: do you feel the pressure of the nation? It’s a tennis match. I do my best. If I win, great, if I lose, I’m upset. But people’s lives go on.’

Murray has reached the final five times at Melbourne Park, falling agonisingly short each time. Edmund, whose ranking is assured now to reach the mid-thirties, believes he could go one better. 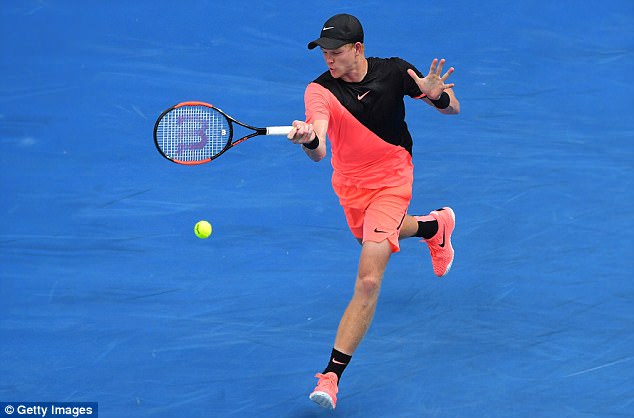 ‘You have to believe it,’ he said. ‘I mean, that’s why I’m in the quarter-finals, because every time I step on the court and I’m playing, I believe I’m going to win.’

Dimitrov, so often compared to Roger Federer in terms of style, can be inconsistent, for all the best efforts of Murray’s ex-coach Dani Vallverdu in making him far more professional these days.

In the second round he nearly lost against the little-known American qualifier Mackenzie MacDonald, squeezing through 8-6 in the fifth set. Nonetheless he overall looks like a much more genuine top-five player since winning the ATP Finals at the O2 Arena in November.

‘He (Edmund) has got this far, there is no room for any underestimation on my side,’ said Dimitrov.