To Andy Murray and Jo Konta add Kyle Edmund as a third significant British figure at Grand Slam level, but there was to be no dream run into the final of the Australian Open.

Uncharacteristically tetchy and seemingly restricted in his movement in the third set, Edmund was well beaten 6-2 7-6 6-2 in two hours, 18 minutes by Croatia’s Marin Cilic, who was left awaiting Friday’s winner between Roger Federer and Hyeon Chung.

This was the world No 6 versus the world No 49, with a huge gulf of experience, and on the night it showed. It was asking a lot of Edmund to slay another giant. 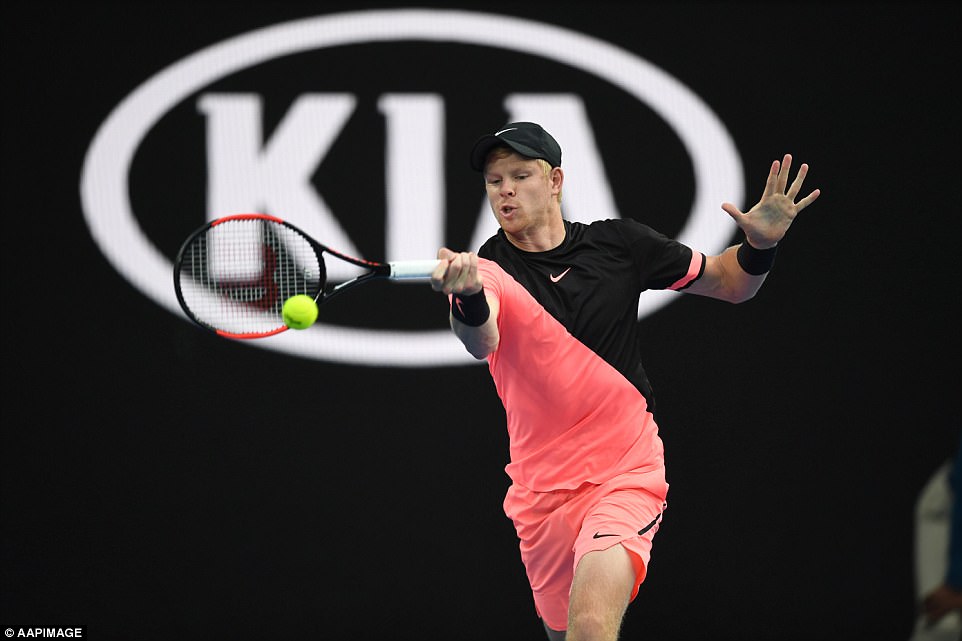 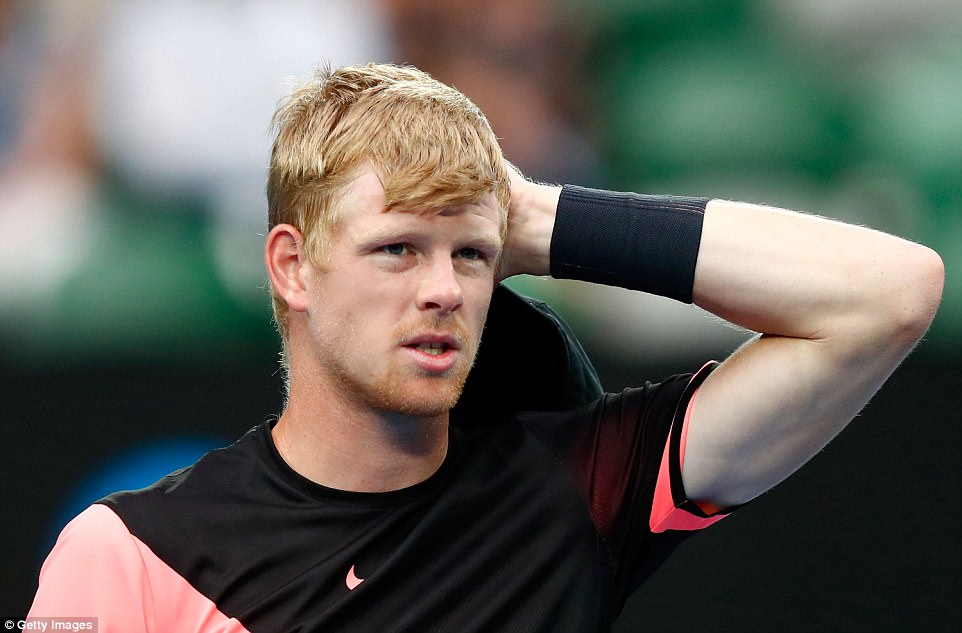 The 23-year-old was frustrated in the first set, with his Croatian opponent proving too much in their opening match-up 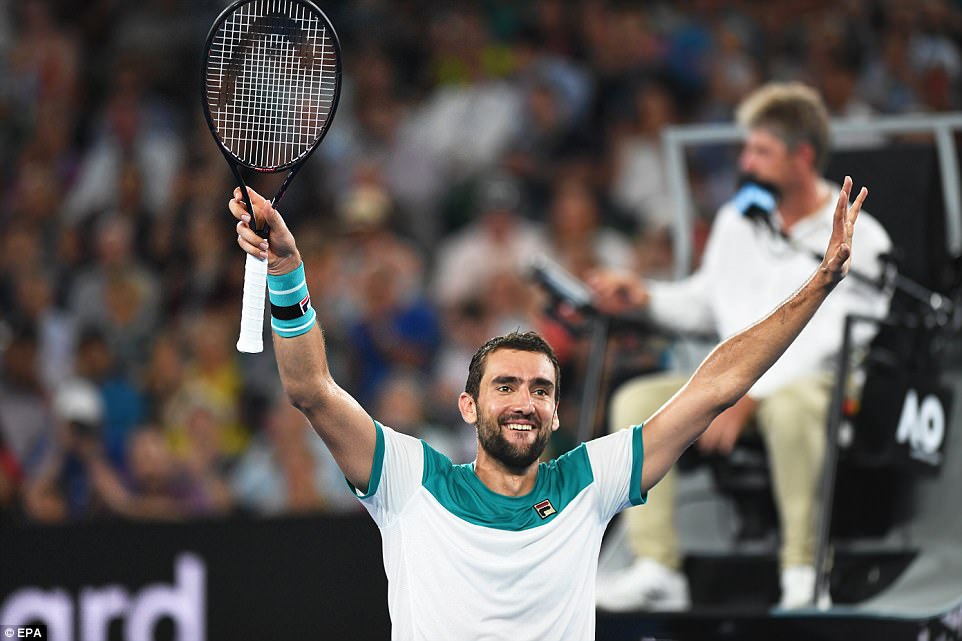 Cilic, the giant Croatian star, was the first to break in the first set in his bid to reach his first ever Australian Open final 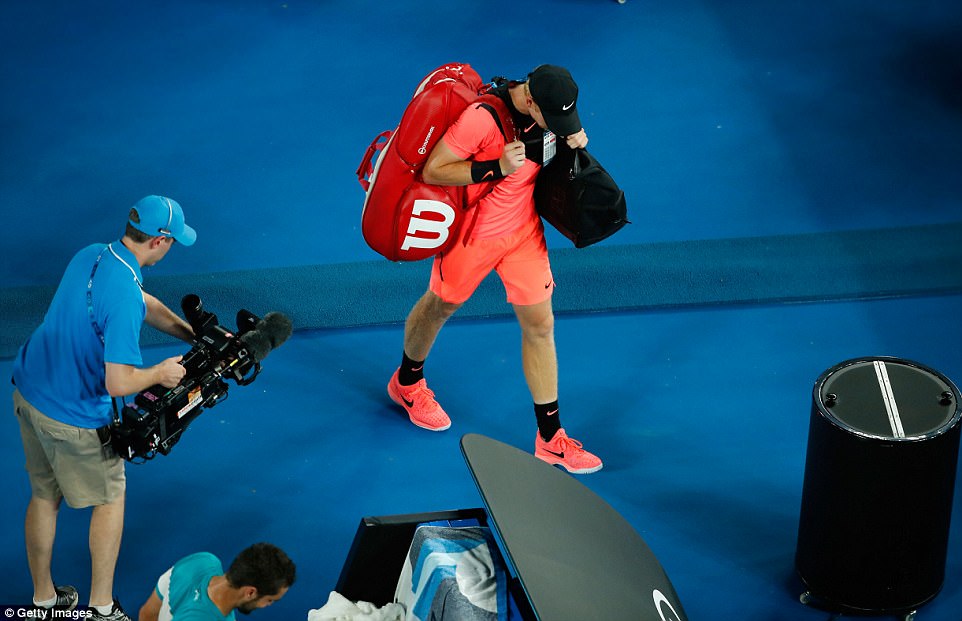 The feline Cilic played a smart match, defusing the now infamous Edmund forehand, and his own flatly-hit groundstrokes were equally as potent, especially when the odd hobble crept into the Yorkshireman’s stride.

It has still been a remarkable fortnight for him, and there is the consolation of £512,000 prize money and a new mid-twenties ranking that will see him seeded for the French Open and most likely Wimbledon.

But ultimately this was a comprehensive display from Cilic, who showed no hangover from a taxing match against Rafael Nadal in the previous round. He is into his second final from his last three Grand Slam events.

Edmund, gaining more support from an Australian crowd than any Englishman has done here in recent months, can reflect with pride on what he achieved during what hopefully is the temporary absence of Andy Murray.

He had given immediate notice that he was not going to be overwhelmed by uncorking two groundstroke winners off either flank to get two break points in the very first game. In an indication of Cilic’s stubborn resolve, both were saved with service winners. 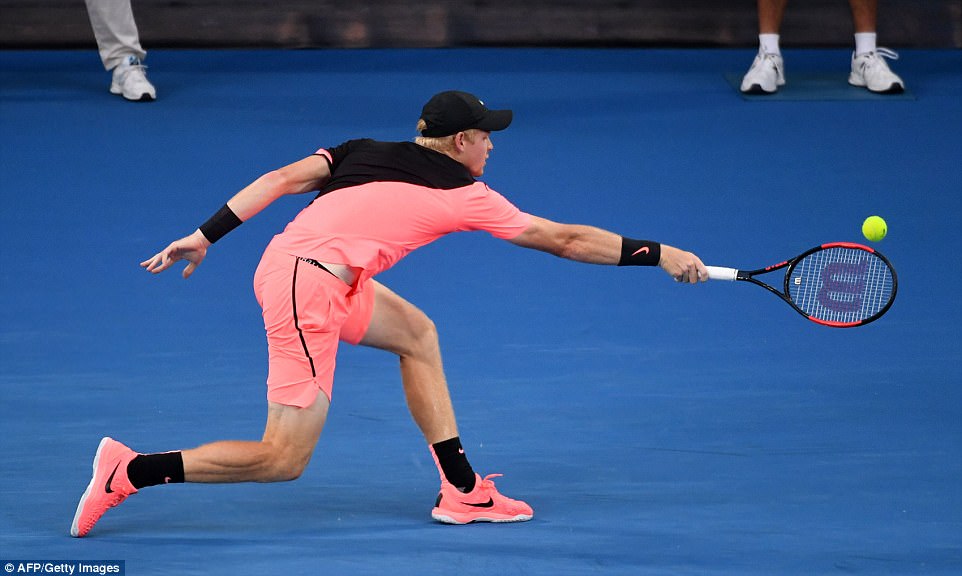 Edmund, pictured playing a backhand return at the Rod Laver Arena, lost the first set 6-2 after a slow start to the match 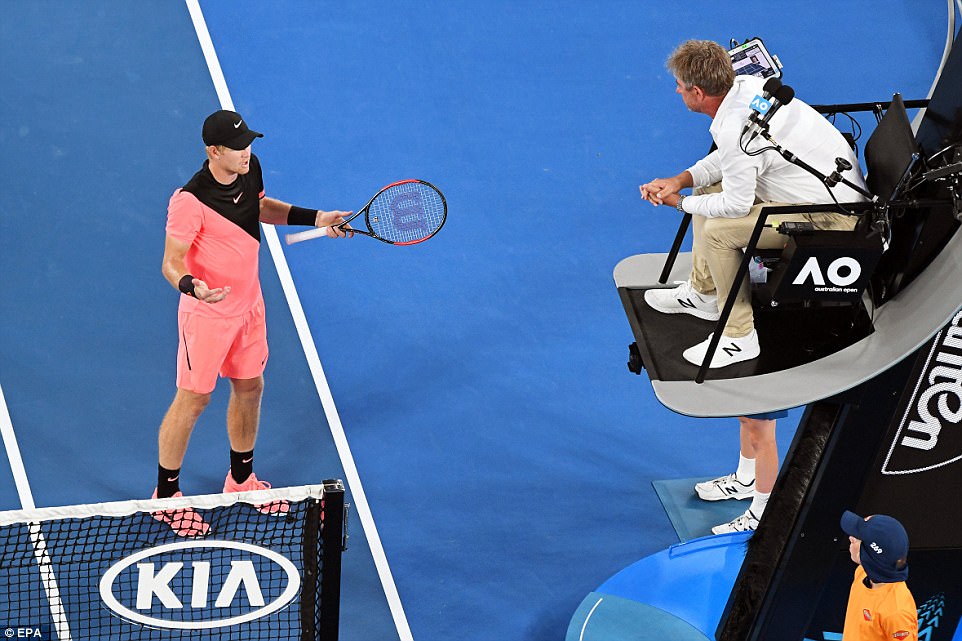 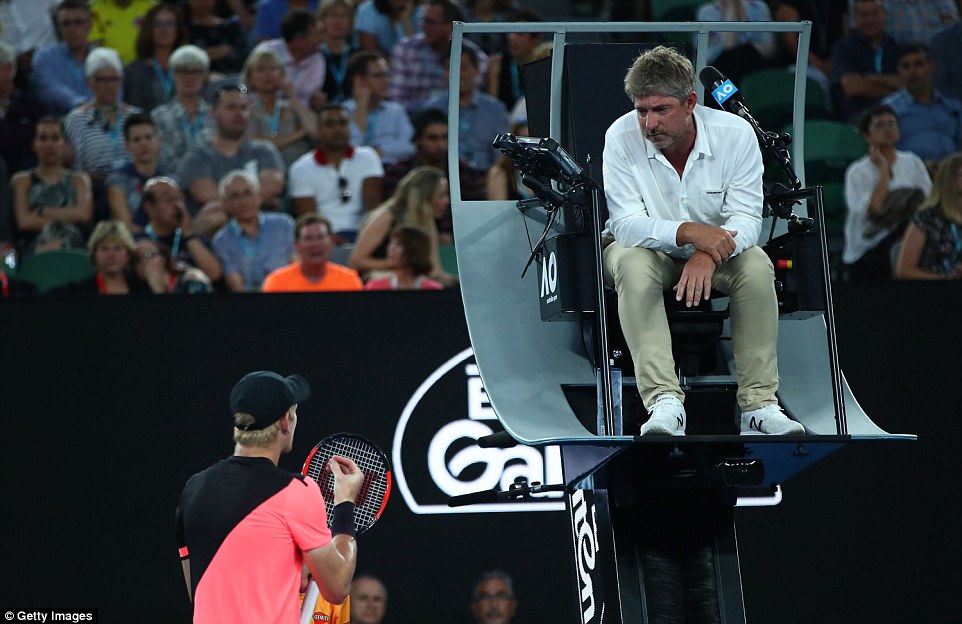 After a point was awarded to Cilic, Edmund made his feelings known towards the Australian Open umpire 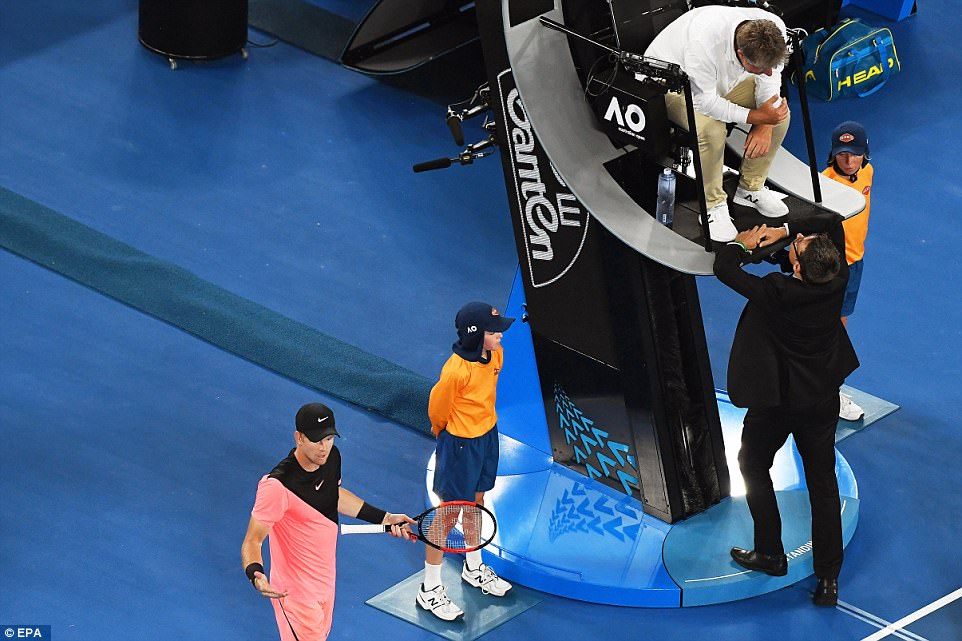 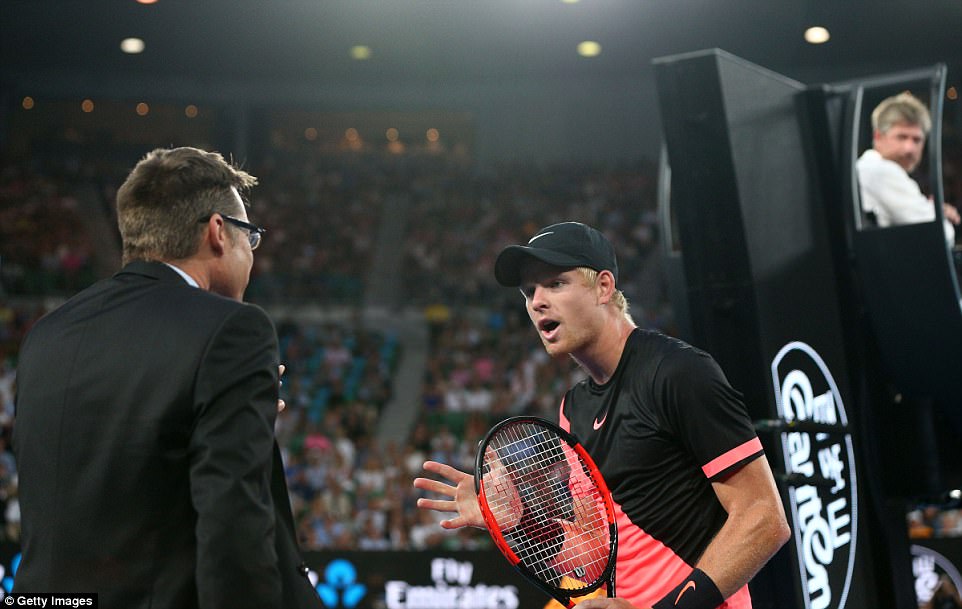 Edmund claimed he was put off by the line judge, and made this known to the match referee – but decision wasn’t overturned

The Croatian set his stall out to trade backhands with the British No 2, and successfully pinned him into the corner to shut off the explosive danger of his forehand. The result in the sixth game was two Edmund errors on his weaker flank that gave him the break.

Edmund had previously had on-court treatment on his shoulder and upper spine in this tournament and something was looking tighter as he lost four games in a row.

At the end of the set he requested a medical time out and left the court, although it was not immediately obvious what for.

He served an ace at 1-2 to save a break point but was looking for inspiration, and used an almost McEnroe-esque manoeuvre of firing himself by rowing with the umpire at the start of the fifth game.

Annoyed that an out call had disrupted him on an overrule, he demanded to see Referee Andreas Egli after getting into a prolonged argument with umpire John Blom. Or perhaps it was meeting Gordon Ramsay the previous day. 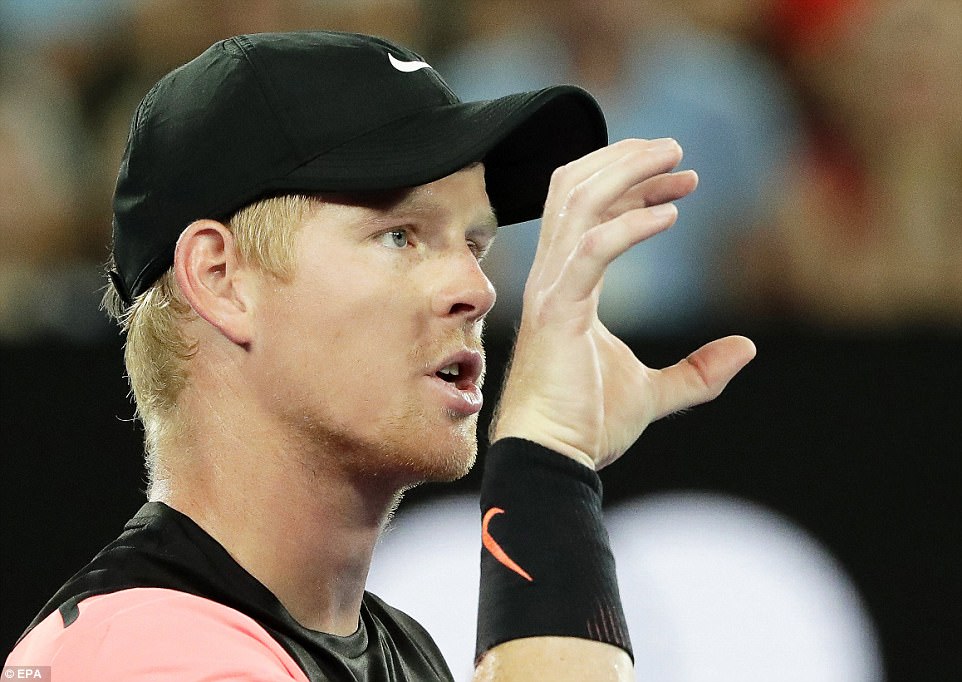 Edmund gestures to the umpire during his bid to reach the Australian Open final, but the Brit was unable to overcome Cilic 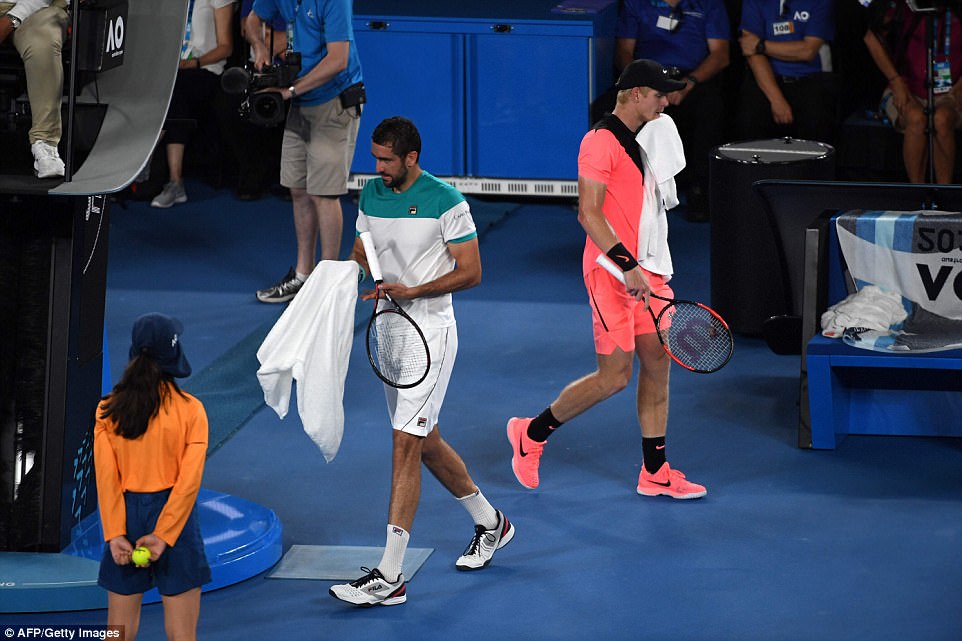 The semi-finalists cross paths during a change of ends, with Edmund using a towel to dry himself in hot Australia conditions 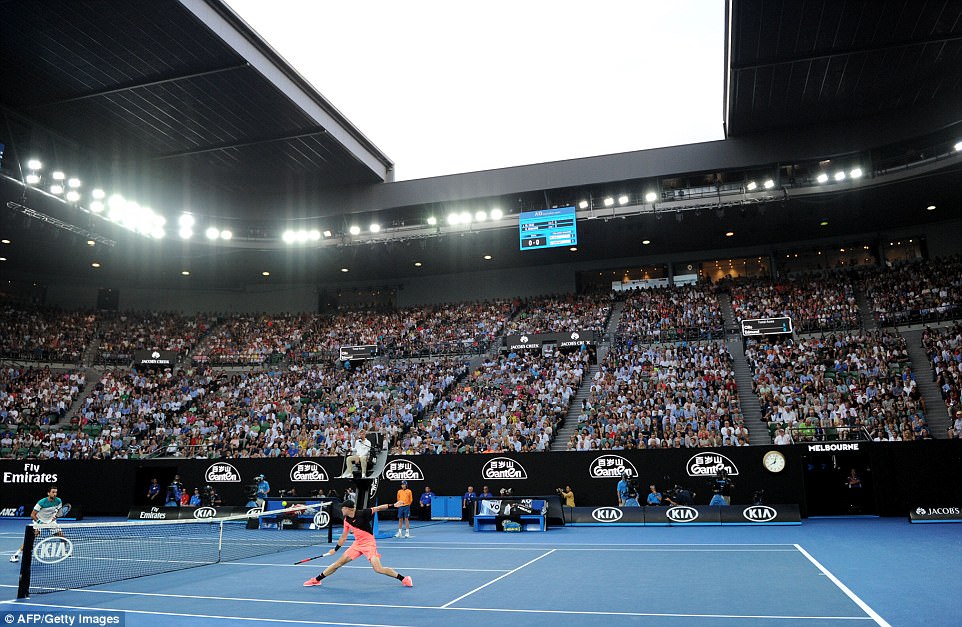 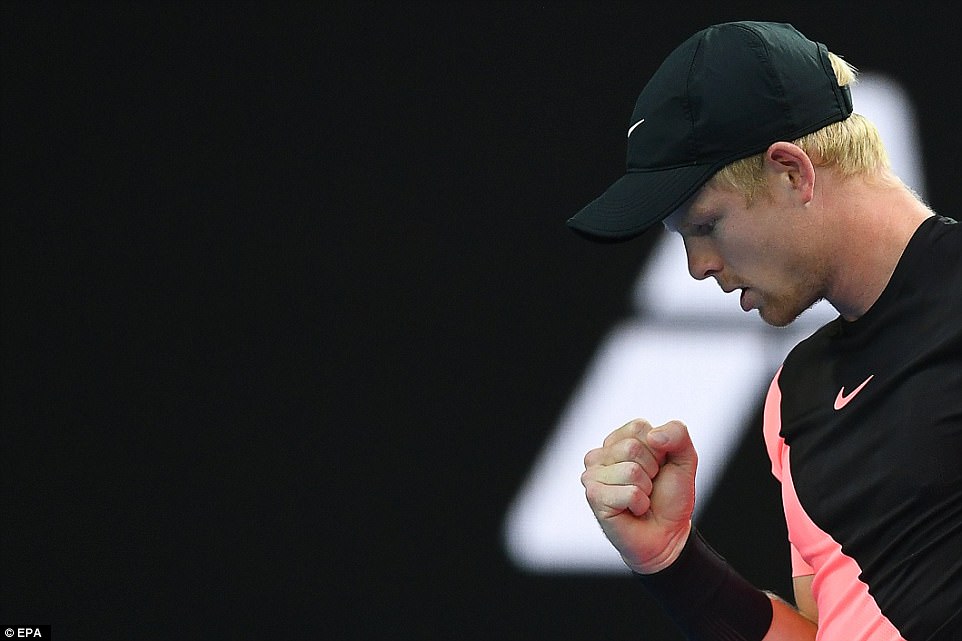 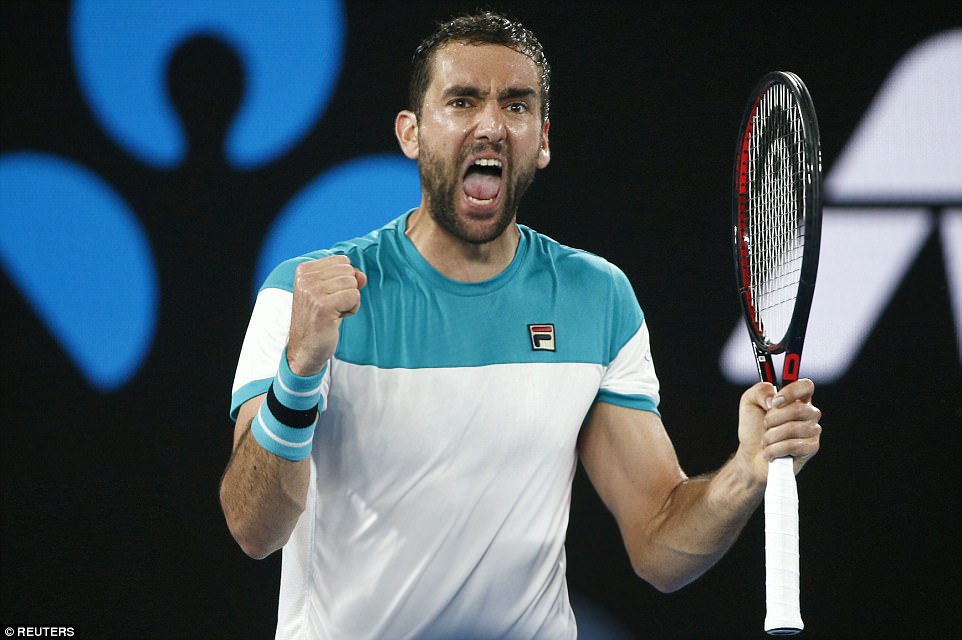 Cilic played a smart match, defusing the now infamous Edmund forehand, and he played a string of flatly-hit groundstrokes

Whatever it did seem to fire him up and he upped the pace of his groundstrokes thereafter, but there was no way past Cilic and his enormous wingspan. He glides around the baseline for a big man, and also hits a mean forehand himself.

There were problems for Edmund most times he failed to land in his first serve, but he still pushed it to a tiebreak, perhaps knowing that nobody bar Roger Federer has come back against Cilic from two sets down.

A glorious backhand winner squared the tiebreak at 3-3, but Cilic forced him way back onto his forehand into the corner on the next point and he could only flap the ball into the net.

At the start of the third it became more apparent that he was not moving as well onto his backhand side, perhaps suffering from the mental deflation of his situation.

Cilic broke for 2-1 by taking his third break point out of five, although he was pushed to three deuces in the next game as Edmund refused to give in. 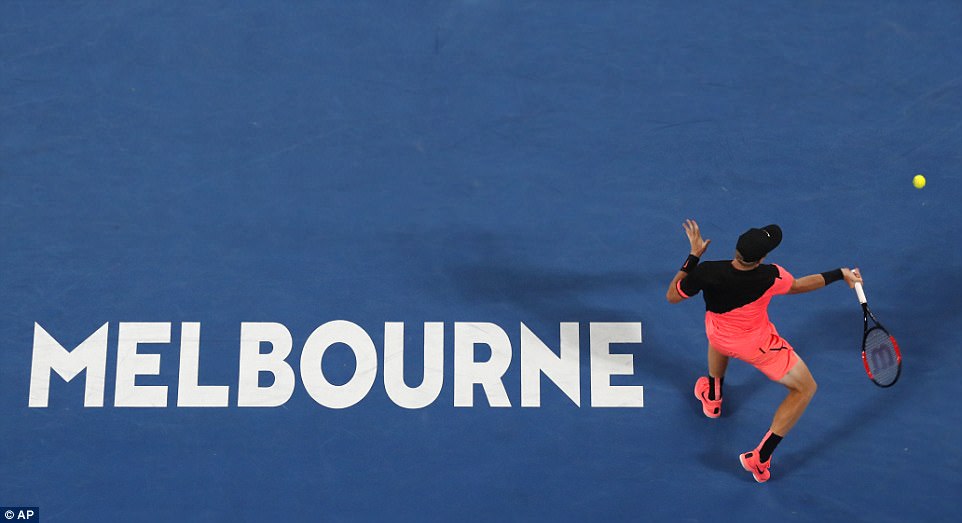 Edmund returns the ball to Cilic, who became the first Croatian to reach an Australian Open final with this deserved victory 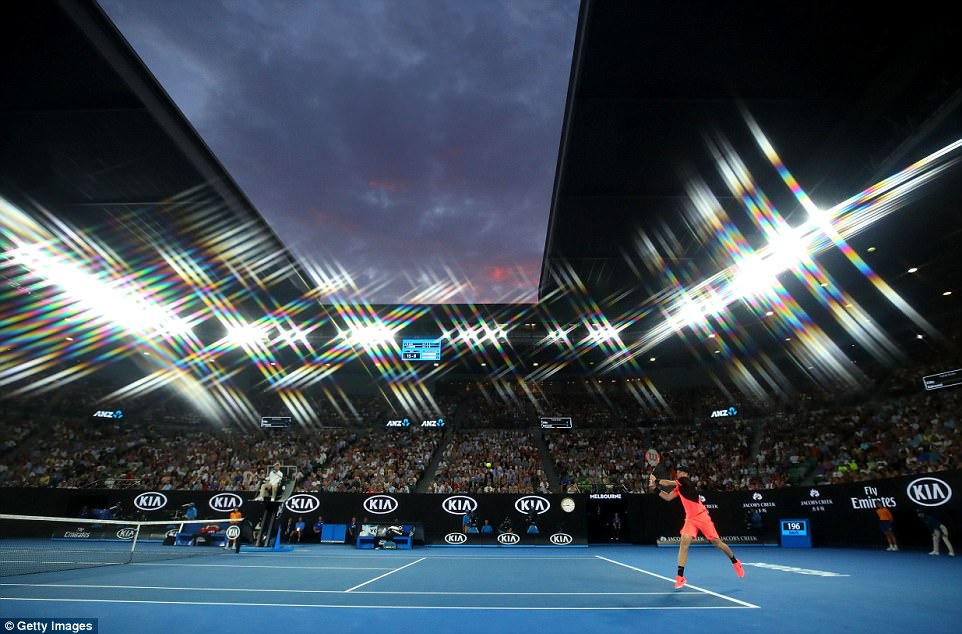 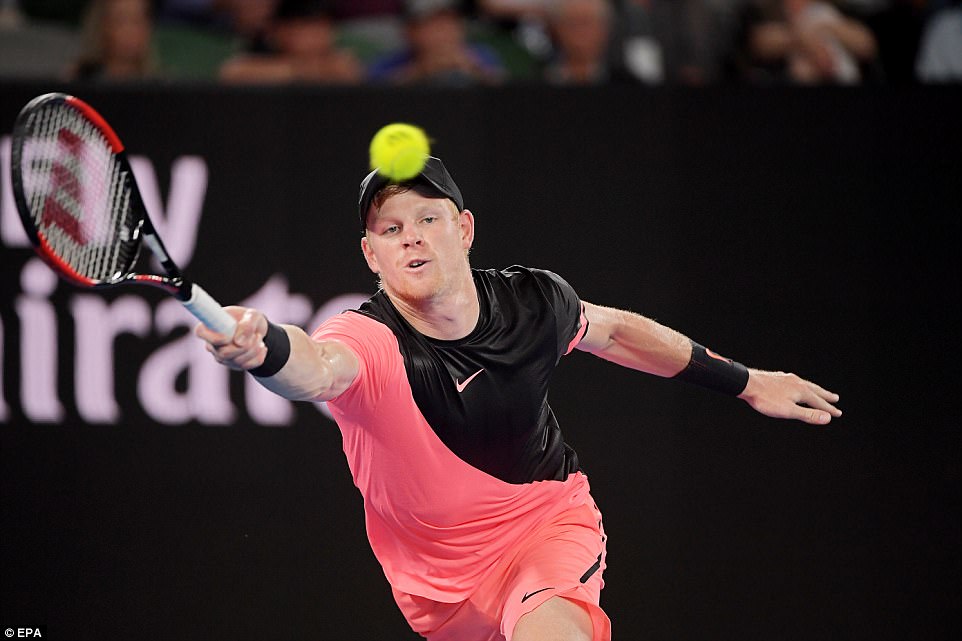 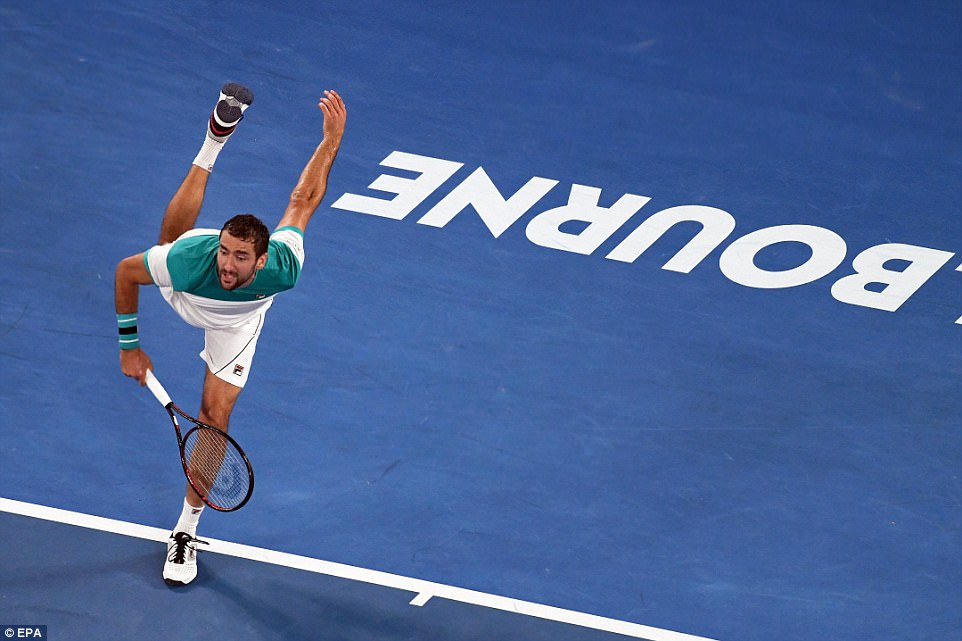 The Croatian is capable of faltering in sight of the winning post, but an awkward backhand pushed wide by Edmund gave the security of a second break in the third set and from then on there was no way back.

At least many people now know Edmund’s name, indeed his life story, and he should push on from here. He is due to play for Great Britain next week in the Davis Cup away to Spain, which will not be much easier.

Cilic said afterwards: ‘In the second set I was a bit up and down in my game and he started to release a few forehands but I stayed mentally very focused. I noticed in the third game in the third set he let a couple of balls go so I saw with his movement he was a bit restricted, so I tried to move the ball around.’

The Croatian suggested Edmund will be around for some time to come.

He added: ‘He is playing great tennis and he improved a lot the last couple of years. He had an extremely tough run to the semis and it left some scars on his body, definitely he has got a bright future and we will be seeing a lot of him around.’ 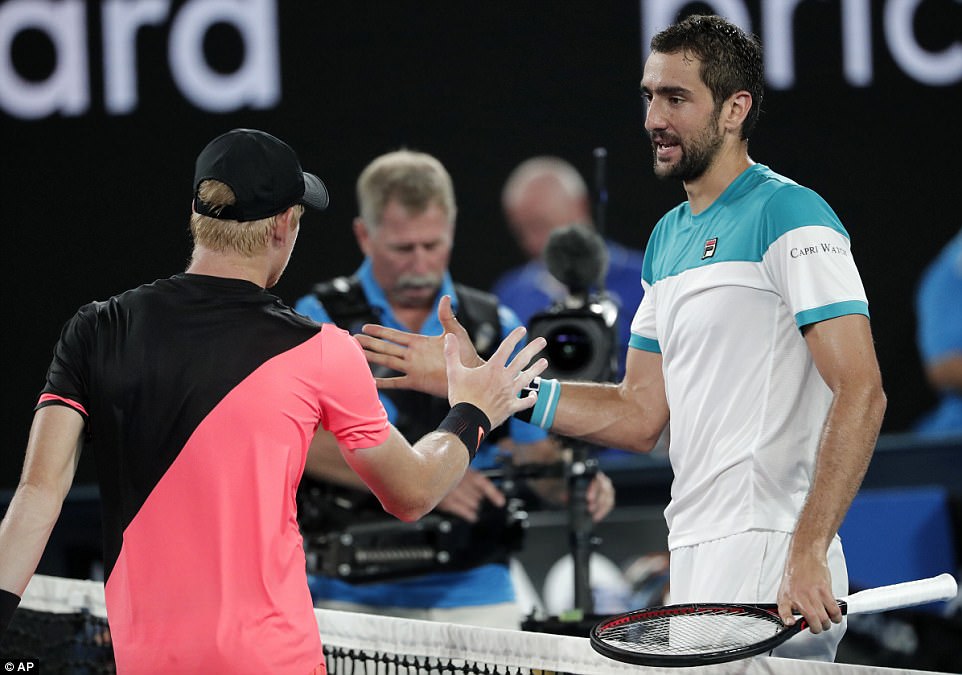 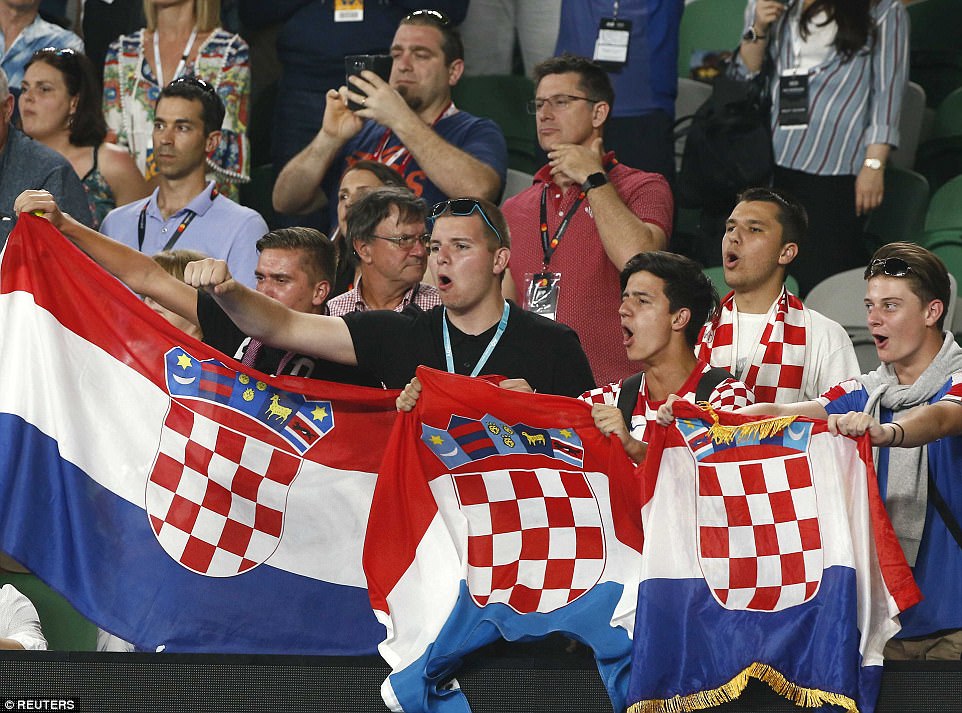 There was plenty of support for the Croatian on Wednesday, with these fans showing their appreciation during the match 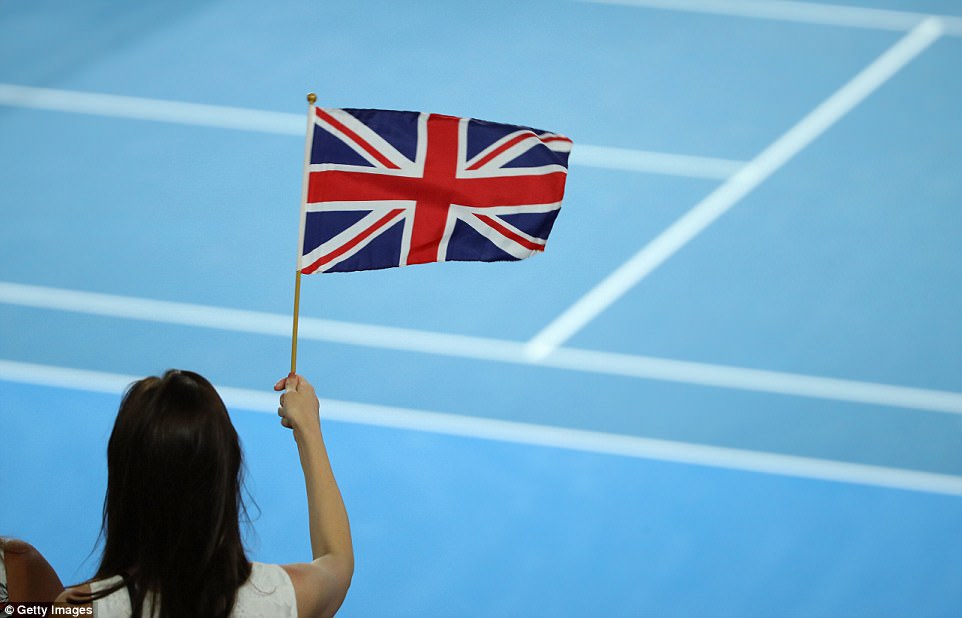 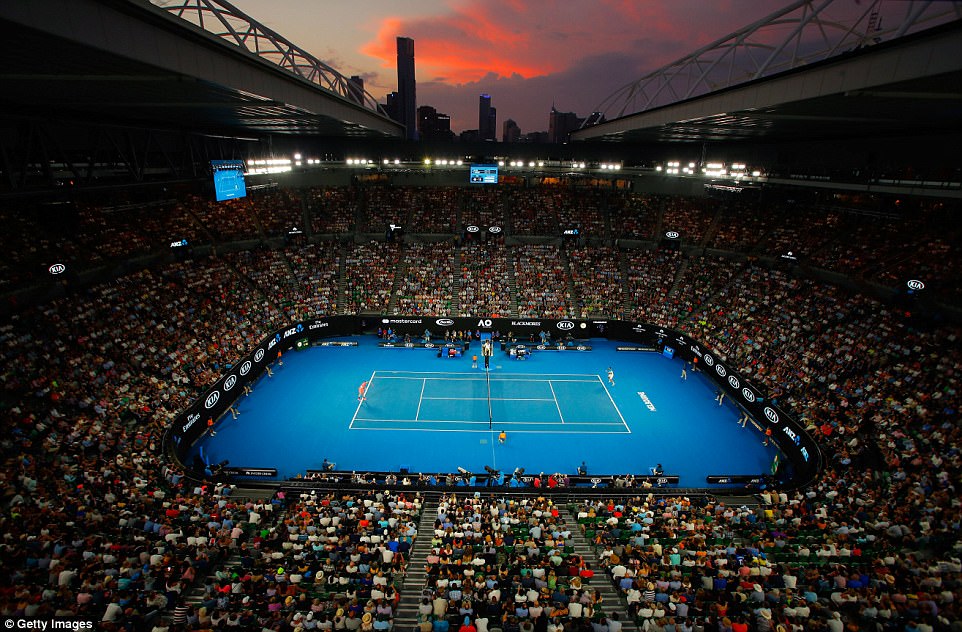 A stunning general view of the impressive-looking Rod Laver Arena, with the sunset providing a picturesque backdrop