Kyle Kashuv, a survivor of the Parkland, Florida school shooting who has emerged as a gun-rights activist, has apologized for making ‘callous comments’ several years ago.

On May 16, a fellow student posted a screenshot on Twitter, saying that it shows a class Google Doc written in December 2017, two months prior to the shooting that left 17 dead at the school.

According to the student, Kashuv wrote repeatedly wrote ‘N*****’ in all caps, followed by: ‘like im really good at typing n***** ok like practice uhhhhhh makes perfect.’

Kyle Kashuv, a survivor of the Parkland, Florida school shooting who has emerged as a gun-rights activist, has apologized for making ‘callous comments’ several years ago 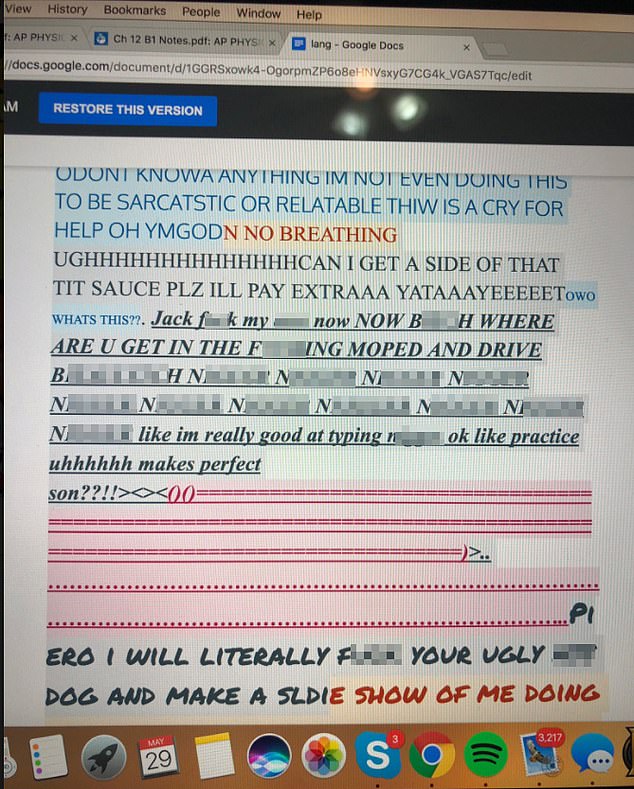 The shared Google Doc was a midterm study guide that classmates used for an Advanced Placement U.S. history exam.

In that same document, Kashuv apparently said he would ‘f**king make a CSOG map of Douglas and practice.’ The acronym is believed to refer to the shooting game ‘Counter-Strike: Global Offensive.’

In a separate text message exchange shared by the female student, Kashuv is identified discussing a fellow student, saying that she ‘goes for n*****jocks’, an apparent reference to black student athletes.

The same day that the remarks were posted online, Kashuv announced that he was stepping down as director of high school outreach for Turning Point USA, a national conservative student organization.

Another Parkland student who had access to the racist remarks told the Huffington Post that she she had threatened Kashuv with exposure shortly before he stepped down from Turning Point.

Kashuv posted the above apology on Twitter on Wednesday night, after the remarks circulated

Kashuv, currently 18 and a senior at Stoneman Douglas, said in a statement on May 16 that he was leaving Turning Point to focus on ‘school safety legislation’ before starting college at Harvard in 2020.

Kashuv’s apology on Wednesday came as the Huffington Post and Daily Beast were preparing to publish articles about the offensive messages.

‘I have recently been made aware of screenshots circulating that include offensive comments former classmates and I made a few years ago, long before the shooting,’ he wrote.

‘We were 16-year-olds making idiotic comments, using callous and inflammatory language in an effort to be as extreme and shocking as possible. I’m embarrassed by it, but I want to be clear that the comments I made are not indicative of who I am or who I’ve become in the years since,’ he said. 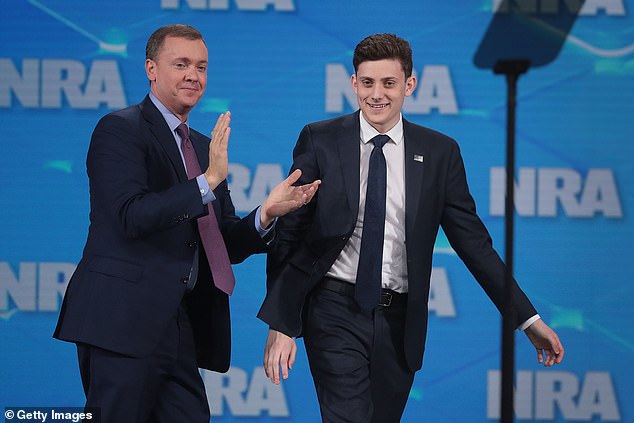 ‘I see the world through different eyes and am embarrassed by the petty, flippant kid represented in those screenshots, Kashuv added, vowing to ‘do better moving forward.’

Kashuv became prominent after the shooting when he spoke in favor of gun rights, as many classmates including David Hogg were advocating for new gun control legislation.

Kashuv has focused his criticism on law enforcement failures that he believes contributed to the Parkland shooting, rather than gun control.

He has met with President Donald Trump, and Florida Governor Ron DeSantis, a Republican, included Kashuv on his Transition Advisory Committee on Public Safety.

Kashuv will be among the graduating seniors at Stoneman Douglas’ graduation ceremony on June 2.

Accused Parkland shooter Nikolas Cruz remains in custody, and prosecutors have thus far declined to offer a plea deal that would spare him the death penalty.