Kyle Sandilands is having the time of his life at 51, and it’s all thanks to fatherhood.

The controversial KIIS FM host, who was once warned by doctors that his hard-partying lifestyle would send him to an early grave, now spends his nights doting over newborn son Otto.

‘I used to watch hours and hours of TV, and now I just sit there looking at him and he’s really been a joy,’ he told Daily Mail Australia.

Shock jock Kyle Sandilands tells Daily Mail Australia that he’s never been happier following the birth of his first child, son Otto. Both are pictured together

‘I’ve just been sitting at home the whole time which I’ve enjoyed. I’m at home now more than I was with lockdowns, so we’re loving every second of it.

‘I’m pretty happy actually. I can’t imagine being any happier.’

Kyle, who welcomed Otto with fiancée Tegan Kynaston in August, admitted he never dreamed of having children, but now he’s ‘thrilled’ that he decided to take the plunge and become a dad.

At the height of his partying in the late 2000s, Kyle suffered from drug addiction and was battling depression. 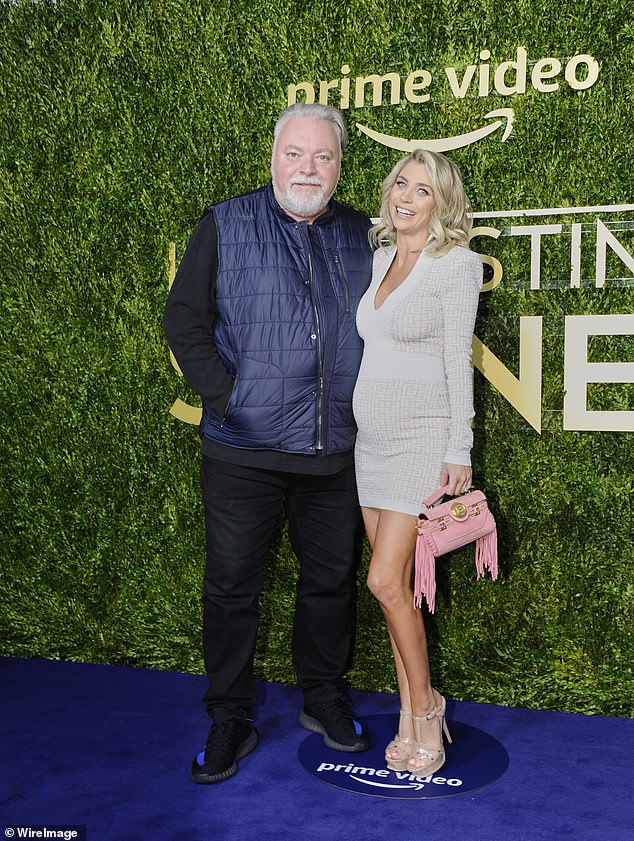 Kyle, who welcomed Otto with fiancée Tegan Kynaston in August, admitted that he never dreamed of having children before, but now he’s ‘thrilled’ that he decided to take the plunge and become a dad. Kyle and Tegan are pictured together in March

In 2018, he said he’d been ‘self-medicating and bumping back dozens of lines’ and his lifestyle often caused him to miss work, including skipping out on two live eviction shows while hosting Big Brother with Jackie ‘O’ Henderson in 2008.

Despite fatherhood softening him up these days, the outspoken star promises that viewers won’t be getting a politically correct Kyle when he returns to screens as a judge on the upcoming Australian Idol reboot.

‘Oh my god, are you kidding?’ he scoffed when asked if he’d let the current woke culture stifle his famously unfiltered persona on the family-friendly show. 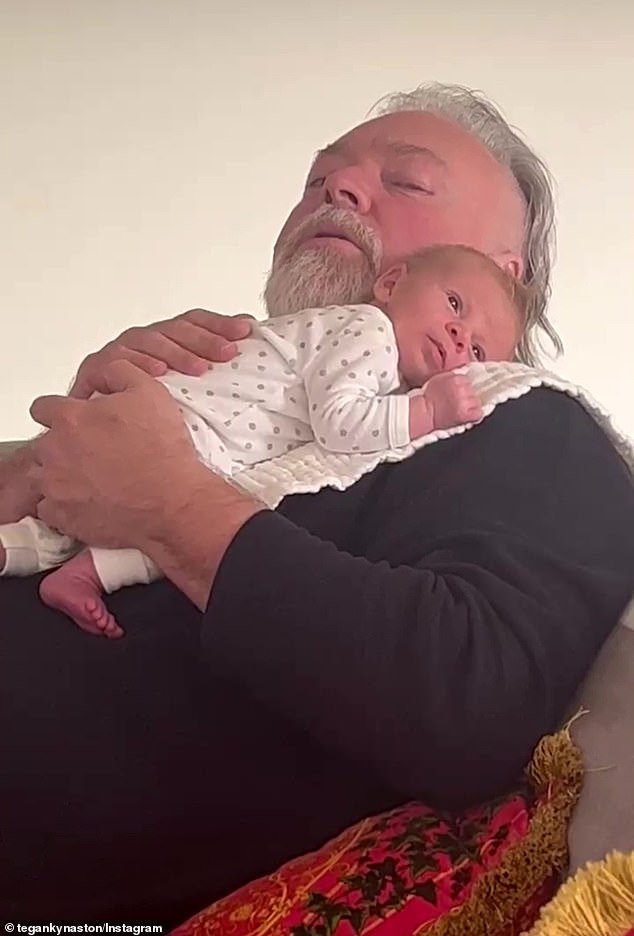 ‘I used to watch hours and hours of TV, and now I just sit there looking at him and he’s really been a joy,’ Kyle (pictured with son Otto) told Daily Mail Australia

‘I even asked Channel Seven when they called me into the boardroom and said, “We want you to come back.” And I was like, “Listen. I’m not going to be able to be one of these light and love judges”.

‘I’m very cut-to-the-chase. Not nasty, but I’m not gonna be pretending like they’re great. I said, “If they’re s**t, they’re gonna be told they’re s**t. Or they’re deluded. Or they need to work on this”.

‘I said that I’ll be as nice as I can be, but I won’t be like a Voice coach. It’ll be like the harsh realities of the commercial side of the business.’

Kyle added that his role on the judging panel, which also includes Harry Connick Jr, Meghan Trainor, and singer-songwriter Amy Shark, is to ‘cut through the rubbish’.

But with a newborn baby and his role as one-half of KIIS FM’s The Kyle and Jackie O Show, is Kyle concerned about having too much on his plate?

‘I was at first,’ he admitted.

‘I’ve never been a dad before so I wasn’t sure what to expect, but we’re lucky that he’s pretty well behaved and nicely settled,’ he continued. 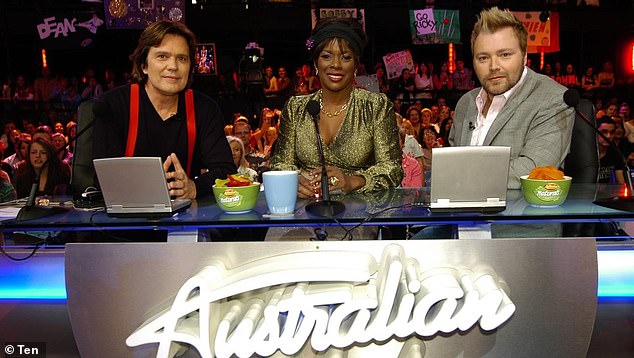 Despite fatherhood softening him up these days, Kyle promises that he’ll continue to be his outspoken self on the upcoming Australian Idol reboot. He is pictured with Mark Holden and Marcia Hines on the original series

‘He’s got a good mum who’s very engaged. She wasn’t too thrilled when she found out I was gonna vanish out of the house for 20 days, but there’s a few times where I get to come back in between the different cities, so we’ve worked around it.

‘She doesn’t mind. She understands that work’s pretty important.’

And with family life going so smoothly, Kyle and Tegan haven’t ruled out having more kids in the future.

‘We’ve said that we’d see how the first one goes and even though he’s gone really well, we did just realise that we’ve got some friends that have two or three children and they look like beaten wrecks and they never can come out,’ he said.

‘But it hasn’t been ruled out, but we’re just going to edge our way through the first one, and if Tegan feels like she wants a second one then we’ll chat about that. 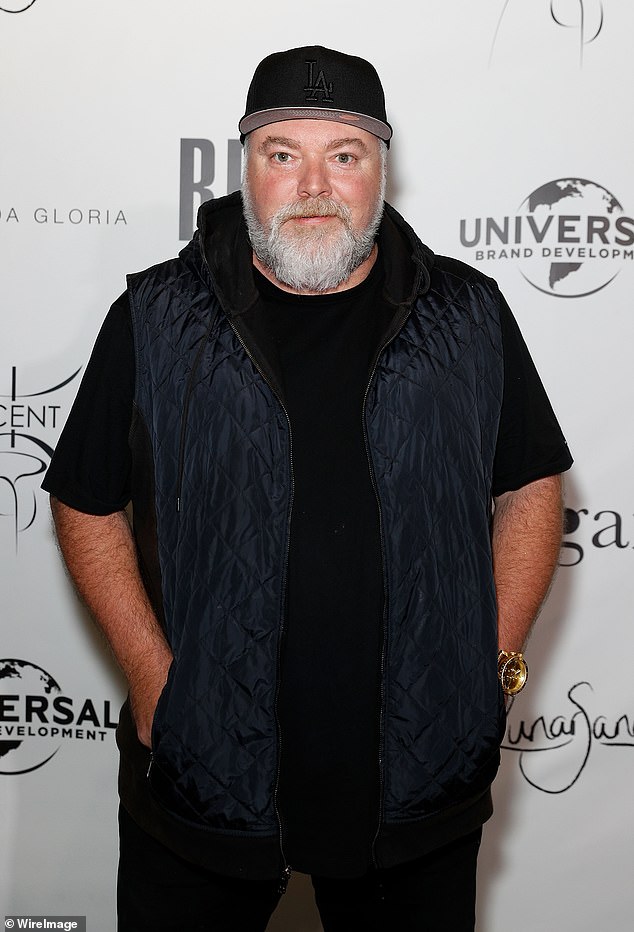 Sandilands, 51, (pictured) said that he and Tegan ‘haven’t ruled out’ having more children 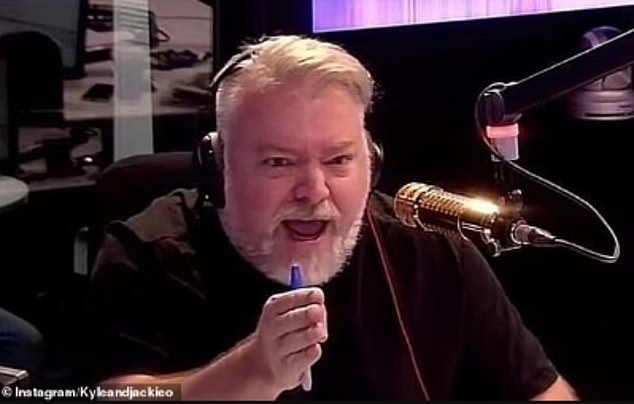 ‘I’ll be as nice as I can be, but I won’t be like a Voice coach. It’ll be like the harsh realities of the commercial side of the business,’ Kyle (pictured) said about his upcoming stint on Idol

Channel Seven first announced plans for an Australian Idol reboot back in 2020.

The reboot will mark the second time that Kyle will appear on the show, following his stint on the original series from 2005 until 2009.

The 51-year-old exited the original show in 2009 after a string of scandals, which included referring to 2005 winner Kate DeAraugo’s arms as ‘tuckshop lady arms’.

He will be joined on the new season by American artists Harry Connick Jr. and Meghan Trainor, as well as Aussie singer-songwriter Amy Shark. 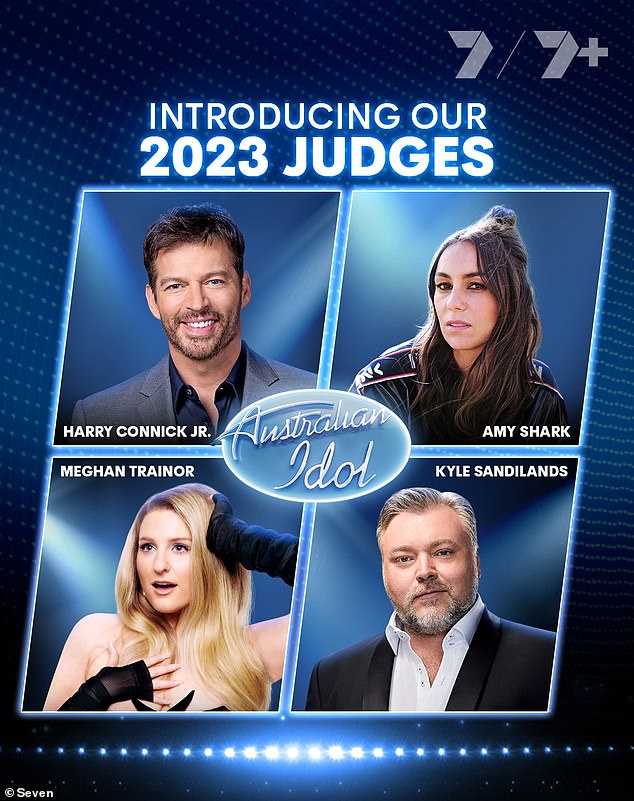 Kyle says that his role on the judging panel, which also includes Harry Connick Jr, Meghan Trainor, and singer-songwriter Amy Shark, is to ‘cut through the rubbish’. All pictured